The TEXRail train line is celebrating its first anniversary this year.

The 27-mile line which connects Dallas-Fort Worth International Airport to Fort Worth, with stops in Grapevine and North Richland Hills, promised to be a game-changer for Tarrant County.

“It just provides another option to beat some of the traffic and some of the stress commuters face on a daily basis,” said Jon-Erik Arjanen, vice president and chief operating officer for rail. 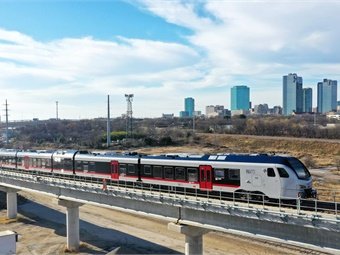 “We came in on time and under budget. We went in and ran 6 months and then we added 30-minute headways,” Arjanen said. “We almost doubled the amount of trains.”

The TEXRail system has been used by realtors to sell and rent properties near the stations.

And the city of Grapevine has seen what some are calling the “TEXRail Effect” as it has become the most popular stop on the line.

“We had high expectations,” Grapevine Convention and Visitor Bureau Executive Director Paul McCallum said. “It has been very successful for Grapevine.”

“It’s tapped into all the communities between Grapevine and downtown Fort Worth, and those individuals make an excursion out of it,” he said. “The leisure visitor has been able to come to Grapevine.”