British Airways has released video footage of its first A350-1000 aircraft (registration G-XWBA) landing at Heathrow airport over the weekend.

The new-generation Airbus aircraft had been due to arrive into London on Friday, but this was postponed following air traffic control issues.

The carrier recently moved forward the planned introduction of its A350 into long-haul service, with flights to Dubai now set to start on September 2.

British Airways to begin A350 flights to Dubai on September 2

This will be followed by Toronto on October 1, with Tel Aviv and Bengaluru seeing the aircraft later in the year.

BA’s A350 will be fitted with the carrier’s new Club Suite business class product, with features including a sliding door, 40 per cent more storage, and a 1-2-1 layout with direct aisle access for all passengers.

See inside the cabins here: 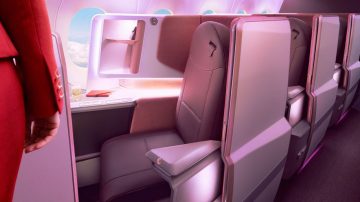