Everything you need to know about the British Airways Club Suite 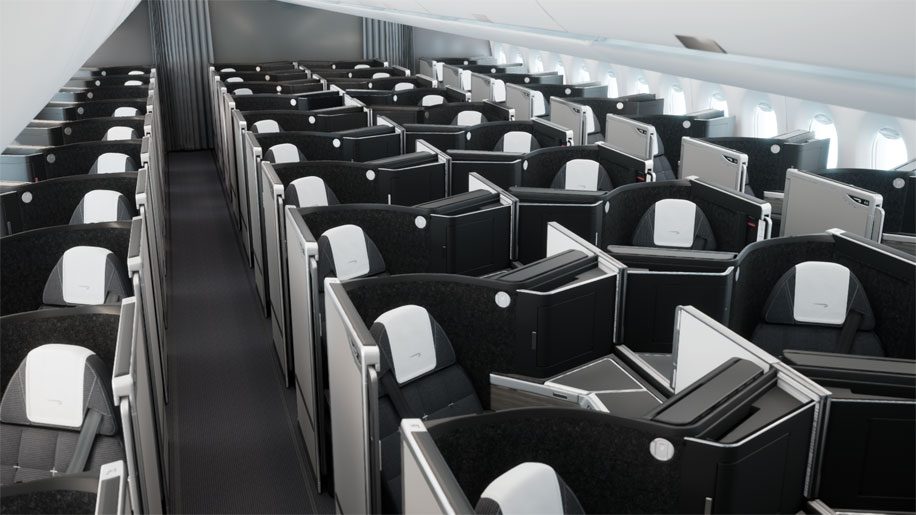 The new British Airways Club Suite is now only a few months away, and details have been released about the roll-out of the seat on the new A350-1000 aircraft that the airline will begin receiving from July, and the retrofit of the product starting with the B777 fleet. This year you will find it on four A350-1000s and two B777-200s, first on a few short-haul flights to Madrid in August and September, and then on select services to Toronto and Dubai from October.

For BA passengers used to flying in business class (or simply walking through it on the way to premium economy or economy), what’s initially striking is the new configuration. All seats face forward in a herringbone layout, replacing Club World’s familiar forward/backward-facing yin-yang formation.

Herringbone takes its name from the angled look of the seats when viewed from above on a plan. Many airlines use this configuration since it allows seats to face forward while at the same time efficiently using the limited space in the business class cabin. The seat is the Collins Aerospace Super Diamond, which can be found on several carriers – we took a look at these in the business class seat guide in our previous issue.

The current configuration of eight seats across (2-4-2) has been replaced by 1-2-1, but perhaps most surprising is the addition of a door, allowing BA to call the new Club World seat the Club Suite. British Airways’ in-house designers and product development team have been working on the seat since 2016 in close collaboration with Collins Aerospace at Winston-Salem in North Carolina.

BA boss Alex Cruz says: “We had a choice between a 100 per cent bespoke seat, an evolution of the existing Club World seat, and what we have selected [a bespoke version of the Super Diamond]. Each of those choices offered different types of challenges, but probably the criterion that overruled everything was speed to market, as well as it being a great product for our customers. As much as I’m not in love with the roll-out process, we will continue to work with the manufacturers to see if we can speed it up.” Read our full interview with Cruz here. 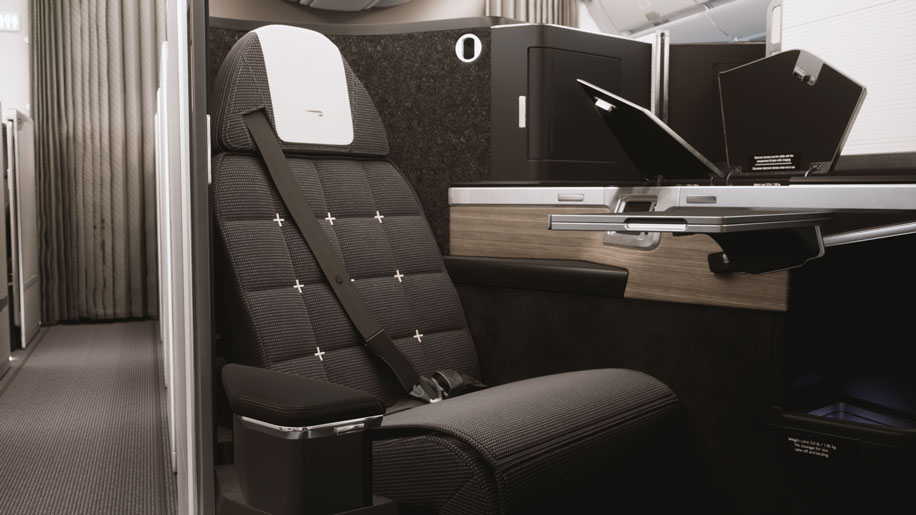 The new seat addresses many of the complaints frequently levelled at the existing one – it now has direct aisle access, plenty of storage (see overleaf) and ample privacy courtesy of the door and the 30-degree oblique angle the seat is set at.

The door is unique (well, apart from Qatar Airways QSuites) and provides the all-important differentiation with other airlines’ business class products. It will be fixed in the open position for take-off (and landing), after which flight attendants will release the locking mechanism. You can then leave it open or closed. For safety certification reasons the customer isn’t allowed to unlock the door during take-off and landing.

The latest Panasonic X3 in-flight entertainment system (the same as on BA’s newly renovated Gatwick fleet) has an 18.5-inch screen. The fact that this is fixed into the shell of the seat in front (or the bulkhead for the front seats) means that you also get gate-to-gate entertainment, because the screen doesn’t need to be popped back into place. There is also a control panel for the seat presets, plus a fine-tuning option so you can have the angle of recline that
you prefer.

For take-off and landing, there is a shoulder strap. This means that there’s no need for an airbag in the waist seatbelt, enhancing comfort for the rest of the flight.

On which aircraft will it be fitted?

Will it be more expensive?

BA is adamant that despite the new configuration being less dense, the price of the seats will not increase. In the case of the aircraft it is being retrofitted on, the number of Club seats will either stay the same or rise slightly. For instance, on the four-class B777, the number of Club seats will rise from 48 to 49. This is achieved by reducing First from 14 seats to eight, keeping premium economy the same, and taking some rows from economy class. Bear in mind that the number of economy seats will also rise as the aircraft goes from nine-across to ten-across. 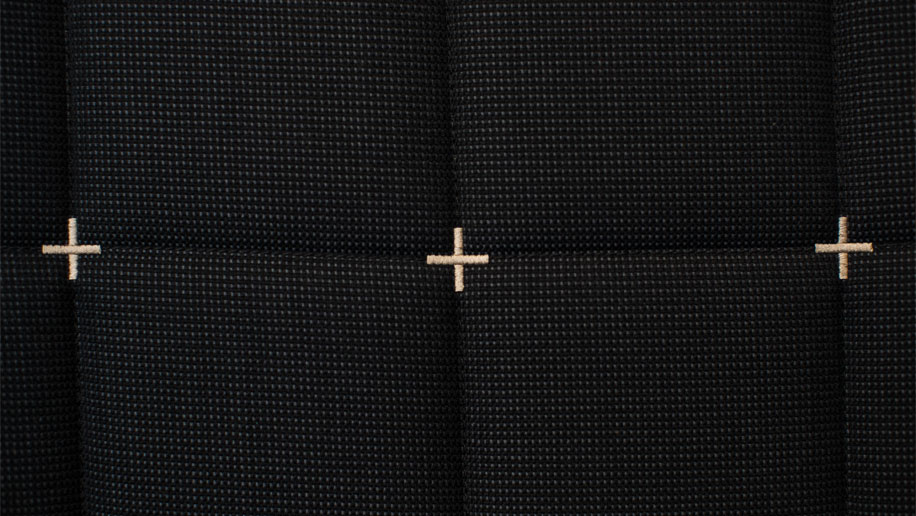 These have been carefully chosen. As well as satisfying stringent safety specifications, they also have to satisfy the colour palette of the new cabin, which is dark on first impression and then light inside the suite, with warm silver, grey and charcoal hues. UK company Hainsworth was used to provide the seat fabrics. There is also a nice touch of felt lining around the inside of the suite, intended to help dampen noise. 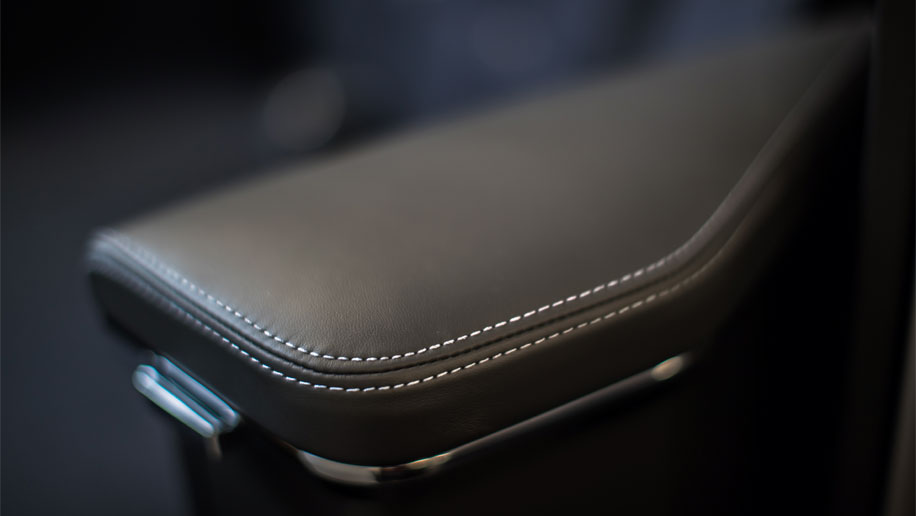 The stitched leather you see here is from Scottish company Muirhead (it’s also on the ottoman footrest). The armrest has a button to lower it after take-off, not only providing comfort but also increasing the amount of room around your shoulders when the seat is fully reclined into a bed. 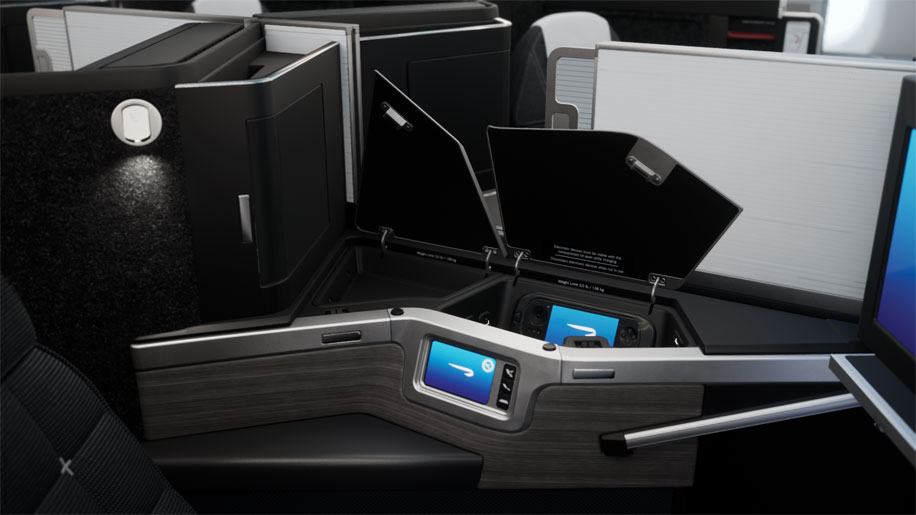 The existing Club World seat has only a foot drawer for any substantial storage. The new seat has several areas including three distinct lockers with lids, one of which contains the power points for charging your devices, and a fourth space for a water bottle. 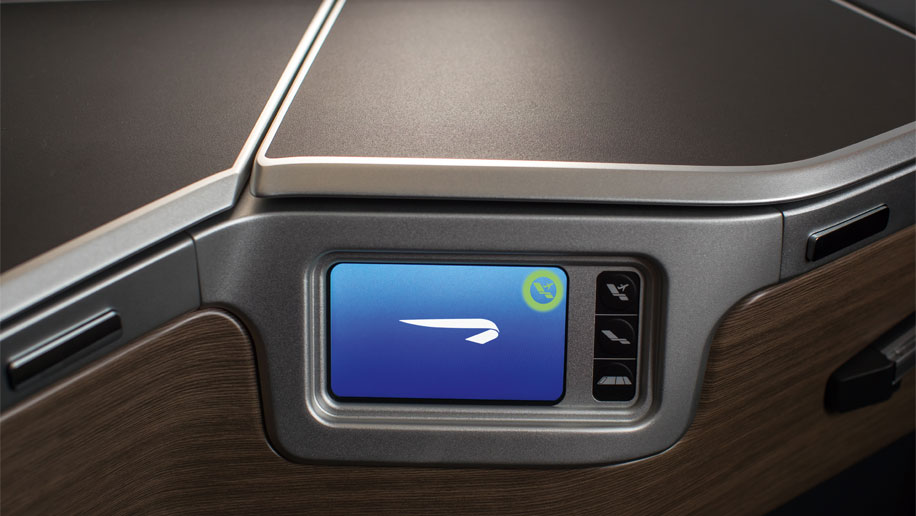 The controls have some easy presets but there are also more options (accessed through the touchscreen) for fine-tuning your seat. Note the anodised trim, which also frames the door on the aisle, and the wood grain-effect panel below the seat controls. The surface above the seat control, in fact, lifts to reveal another of the several storage areas incorporated around the seat. 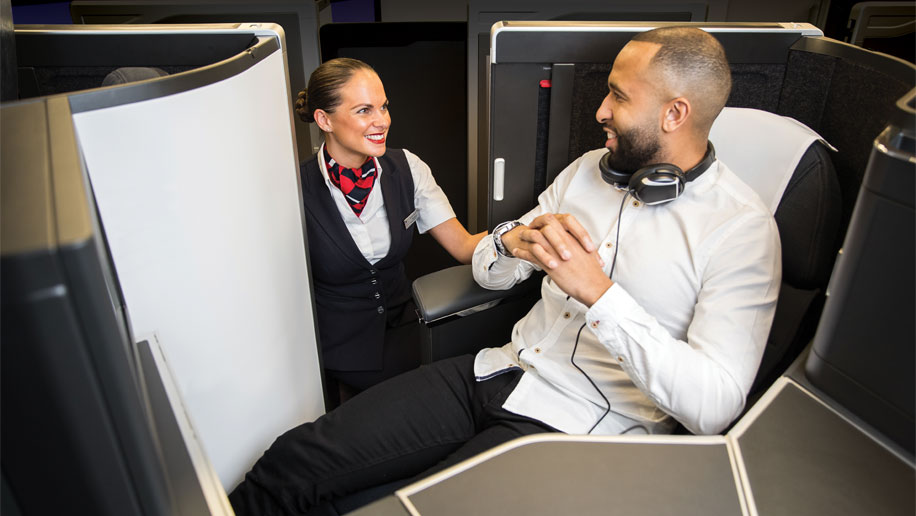 BA is the first airline to add a door to the Collins Aerospace Super Diamond and it helps it to justify calling the new seat a “Suite”. The door has to be open for take-off and landing but can be closed afterwards if you want privacy or left open if you prefer. 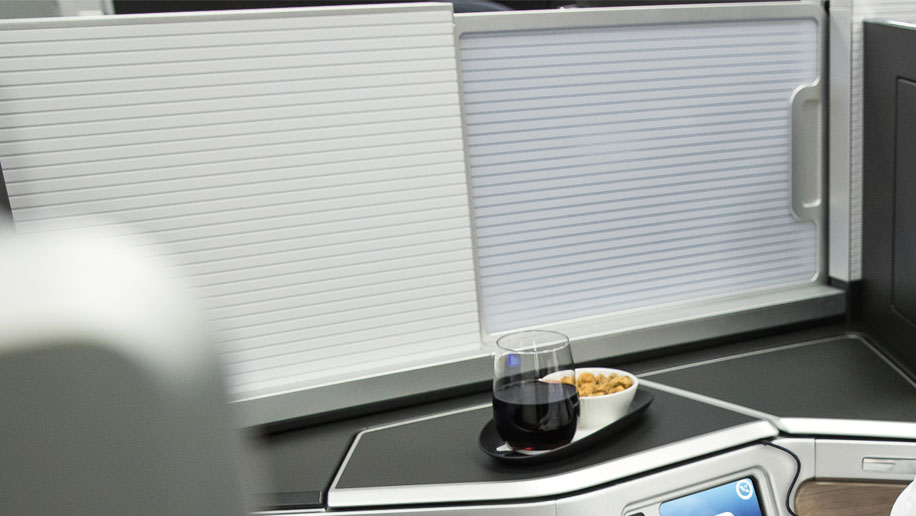 Between the centre two seats is a sliding privacy screen. Keep it open if you want to talk to a travelling companion or shut for privacy. It can be adjusted throughout the flight to suit your preference, including take-off and landing. 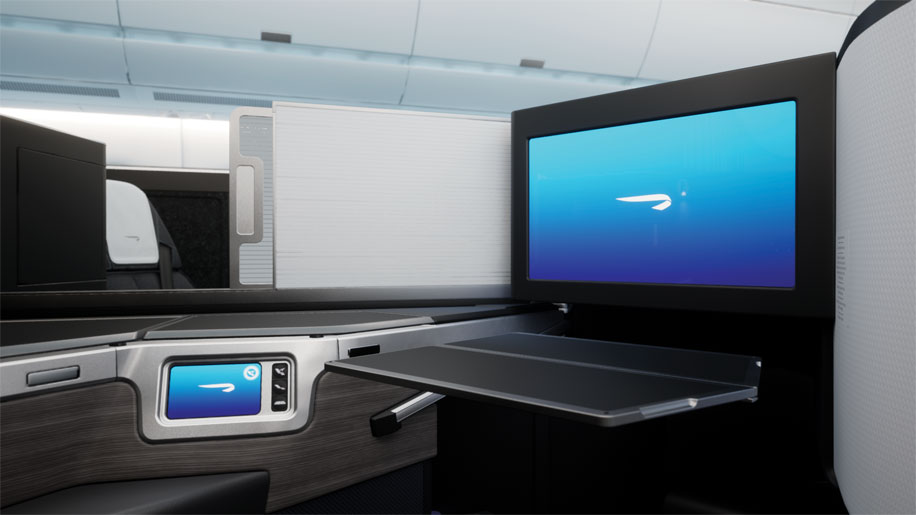 Every traveller wants a table large enough to dine and work at. British Airways has gone further, however, by tailoring the design so that, when not in use, it recesses fully under the IFE screen, giving you more room and ensuring it does not impinge upon sleep space. It is a bi-fold design with a strong support underneath. 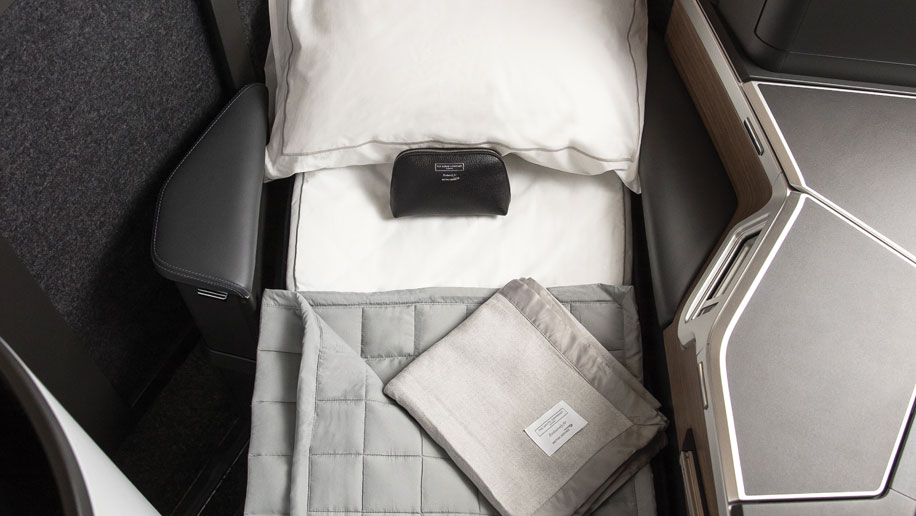 The new seat sees the continuation of BA’s partnership with the White Company, including a new larger pillow and cotton pillowcase, a blanket with satin trim, a duvet and a padded mattress cover. The big bag that the bedding comes in can now be stowed under the ottoman footrest for take-off and landing. The amenity bag is also by the White Company and includes sample-size products.

The rollout of the new seat has been considerably delayed.

The situation just before Covid-19 was as follows