Donald Trump’s effectively dead-on-arrival budget plan calls for cutting Amtrak funding in half, while the US Congress is considering funding critical safety improvements to keep the nation’s passenger railroad on track after a spate of accidents.

Fortune reports that the Trump administration’s fiscal year 2019 budget plan calls for slashing Amtrak’s annual funding from $1.495 billion to $738 million. The plan calls for current federal subsidies for money-losing, long-haul rail service to be shifted to the states.

Amtrak uses its federal funding to pay for needed infrastructure improvements such as Positive Train Control (PTC), a system that can automatically slow or halt trains operating at excessive speed or at risk of collisions.

Congress mandated PTC in 2008, but Amtrak has not had the money to pay for the system, and the Congressional deadline has been repeatedly extended.

Meanwhile, the passenger railroad has suffered several recent high-profile crashes, including a catastrophic derailment in Washington state with multiple deaths and another incident involving a train with members of Congress onboard.

The Seattle Times reports that Amtrak CEO Richard Anderson warned that service on multiple rail lines would have to be shut down if the railroad does not get the money to fund PTC by the end of 2018. Such a move would affect both passenger and freight trains.

A bipartisan group of lawmakers has proposed lending Amtrak $2.5 billion to install PTC — technology that has been available since the late 1960s, and that experts say could have prevented 153 crashes over the intervening decades. 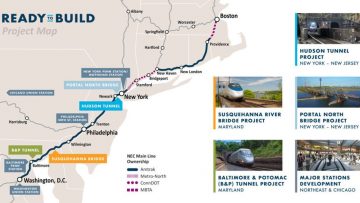 News
Amtrak partners with Lyft to get passengers "from station to destination"
8 Aug 2017
Loading...