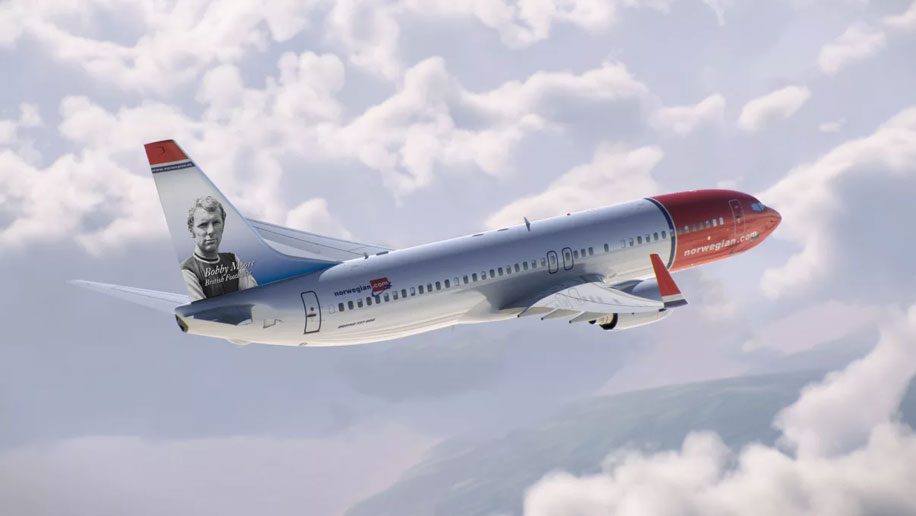 Norwegian has unveiled the latest in its series of British tail fin heroes, with Bobby Moore OBE set to feature on one of its B737-800 aircraft.

The late English footballer will be the fourth “hero” to be depicted on one of the low-cost carrier’s aircraft, following author Roald Dahl, pioneering pilot Amy Johnson, and aviation entrepreneur Sir Freddie Laker.

The news co-incides with this year’s Football Shirt Friday, a fundraising initiative that helps fund life-saving research into bowel cancer, by encouraging people to wear their favourite football shirt and donate £2 to the Bobby Moore Fund for Cancer Research UK.

“This is such a wonderful way to remember Bobby and to mark Football Shirt Friday. We want to see the whole nation wear their team’s colours with pride today and believe that together we can and will beat bowel cancer.

“We have made enormous progress in the last 50 years but sadly bowel cancer still kills 44 people in the UK every day. By joining forces, raising funds and channelling that unbreakable spirit of a football fan to support the Bobby Moore Fund, we can all help bring forward the day when bowel cancer is cured.”

This week Norwegian announced its first quarter 2017 results, with a 14 per cent increase in passengers over the period, but a loss of 1.5 billion Norwegian krone (£136m). The carrier cited higher fuel costs, a stronger krone, and a later Easter for the figures, which compared to a loss of 800 million krone in the first quarter of 2016.