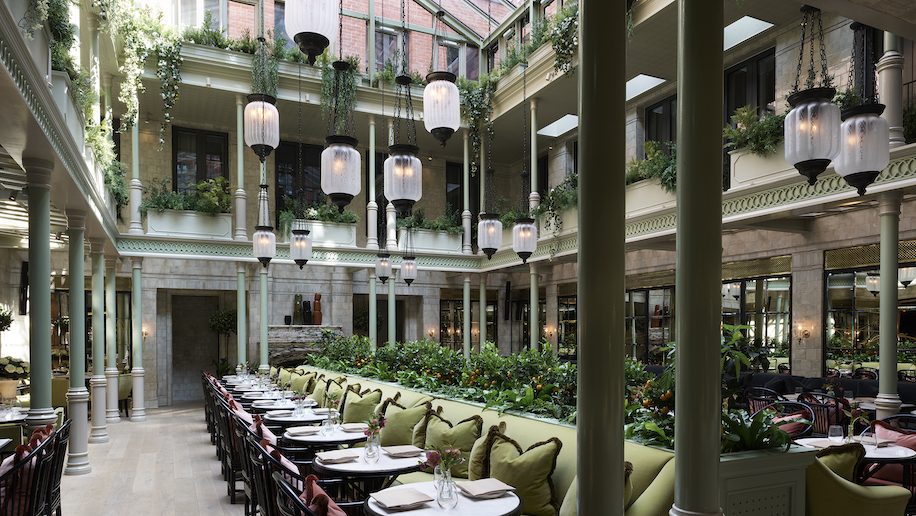 This is a review of the main dining venue at the NoMad London, a luxury hotel which opened in May 2021 in Covent Garden. The hotel occupies the Grade II listed former Bow Street Magistrates’ Court and Police Station.

The hotel belongs to the Sydell Group, which also operates London’s The Ned (in partnership with Soho House) among other luxury brands. It is the NoMad brand’s first overseas property, with a sister outpost in Las Vegas – the original NoMad New York closed in March 2021 and reopened as The Ned NoMad, while the NoMad LA ‘remains closed until further notice’.

The NoMad London restaurant is led by executive chef Ashley Abodeely, whose experience includes roles at NoMad Los Angeles as well as the renowned Eleven Madison Park in New York. 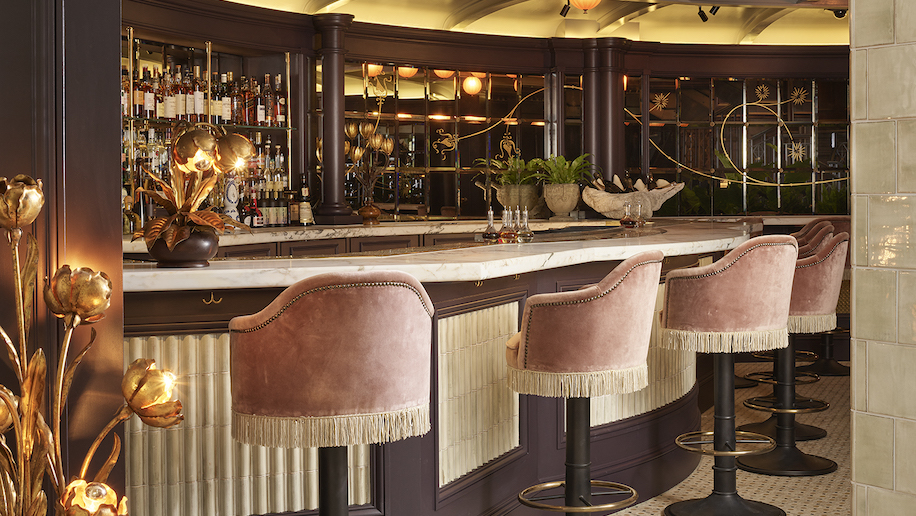 The building has a grand facade, with guests entering the dark lobby via the original porte-cochère. Inside, interiors by New York-based studio Roman and Williams are somewhat theatrical, which is fitting given its location opposite the Royal Opera House.

As you make your way down the stairs ahead, there are two destinations: the speakeasy-style Common Decency bar to the right, its darker and moodier décor giving off a clandestine feel, and the brighter three-storey atrium restaurant and open kitchen to the left. The latter is flooded with natural light thanks to the glass roof, with suspended lantern-like lights dimly lit as an accompaniment. The oasis-like space resembles a greenhouse, with lush plants draping down the columns from each level and furnishings in a light green and teal colour scheme.

The symmetry of the room is particularly pleasing, especially for those like myself that are obsessed with neat and tidy layouts, with light green banquettes at the centre divided by a planting trough. These two-seater tables are close together but remain private thanks to the plump green cushions which act as a comfy and stylish barrier to neighbours. Meanwhile, larger tables flank either side of the room.

It was fairly quiet at 7pm, the open kitchen and Disco tunes providing a nice buzz, while conversations ricocheted off the glass ceiling. As night falls, the room fills, the lighting dims and the soundtrack shifts towards 90s tracks such as songs by Fugees. Tables feature a miniature hand sanitiser spray, a slim à la carte menu hidden beneath the napkin and a hardback drinks menu – a sign of the lengthy contents. 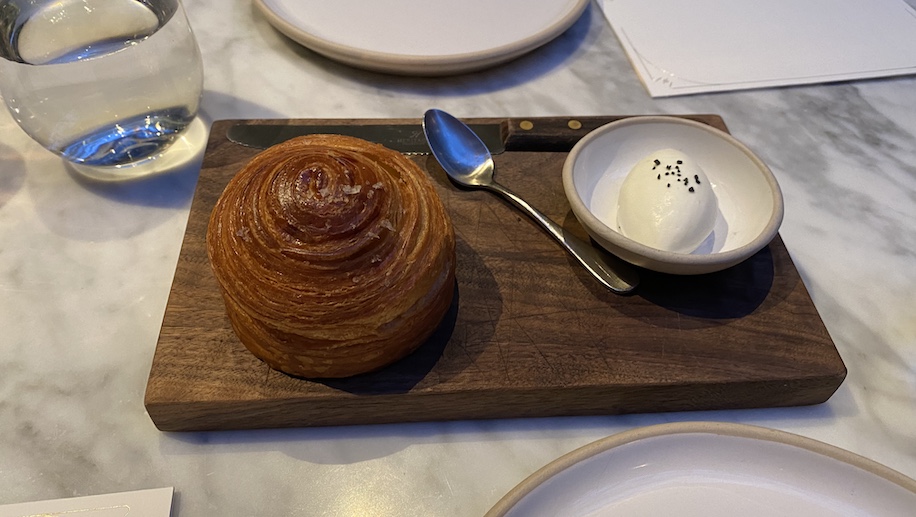 My friend was running a little late, but this gave me a chance to chat with the friendly staff about the incredibly long list of bespoke cocktails, designed by Leo Robitschek and Liana Oster. The cheerful waiter Luca recommended the Sergeant Pepper drink once he heard of my weakness for a Margarita.

Served in a coupe glass, the tequila-based drink has been crafted with cachaca, lemon, pineapple, green pepper, coriander and fiery Jalapeño, and is now among my favourite hotel bar cocktails.

As we turned to the food menu, we were greeted by a Croissant-style pastry and whipped goats curd. Whoever thought up this alternative to sourdough is a genius in my books. While the laminated exterior seemed crusty, the bread knife divided it with little effort, and the salty goat’s curd melted on the warm and doughy centre.

The menu is described as “modern American food with a European influence”, though the list of ingredients reveals a number of global influences too, notably Japanese. 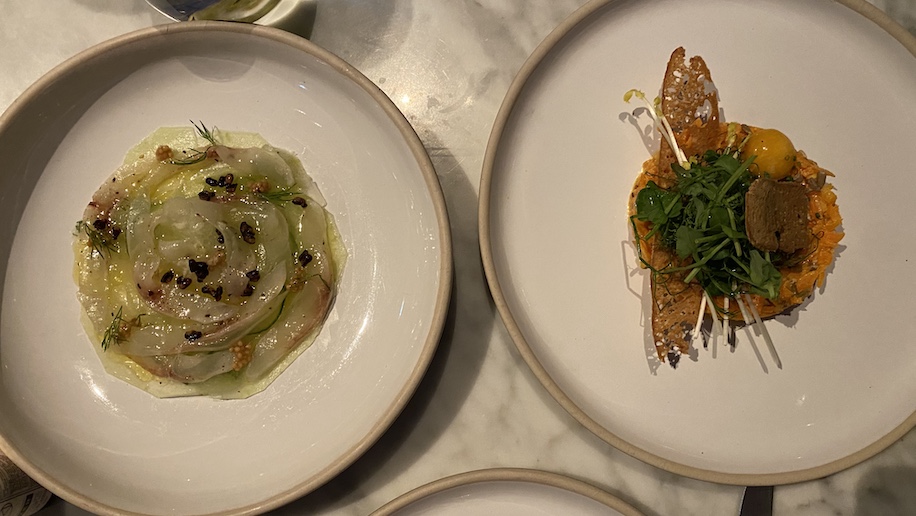 To start, we shared the sea bream cured with melon, cucumber and horseradish, alongside a carrot tartare. The former was a refreshing palate cleanser, but was missing a kick from the horseradish. The latter was a great meatless twist on the classic beef dish, reminiscent of French carottes râpées but with the addition of a rich quail’s egg, crunchy sunflower seeds and fresh sprouts.

Before I move on to the mains, it’s worth mentioning the artistry of the food presentation, each dish intricately plated, with attention paid to the arrangement and colours of the ingredients (my photos don’t do it justice). 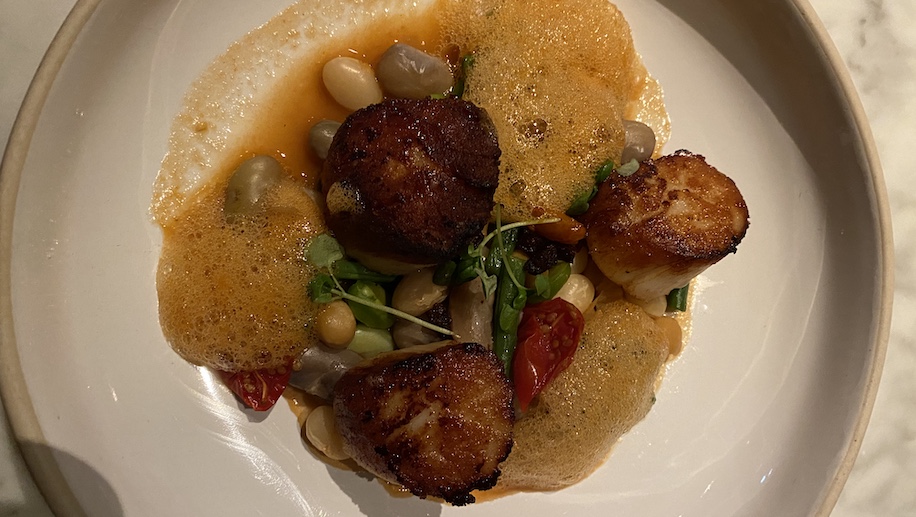 Next came the mains. Huge scallops lay on a bed of summer beans (borlotti, cannellini, edamame, and chickpeas) – the crunch of the beans adding texture to the tender flesh of the well-seared scallops. The only disappointment was that the chorizo was too subtle, the crispy morsels too small to provide the desired smoky addition to the dish.

Meanwhile, my friend was speechless when her main of Herdwick lamb loin with Jersey royals and chargrilled shallots arrived. Her silence was interrupted by “holy hell” – an instinctive reaction to the deliciously tender meat.

The mains appear on the small side, but the rich flavours mean that they are filling – especially if you have already indulged in some bites and starters. The grilled hispi cabbage is also a great Middle Eastern-inspired side, arriving on a bed of tzatziki-like yoghurt laced with fresh herbs. 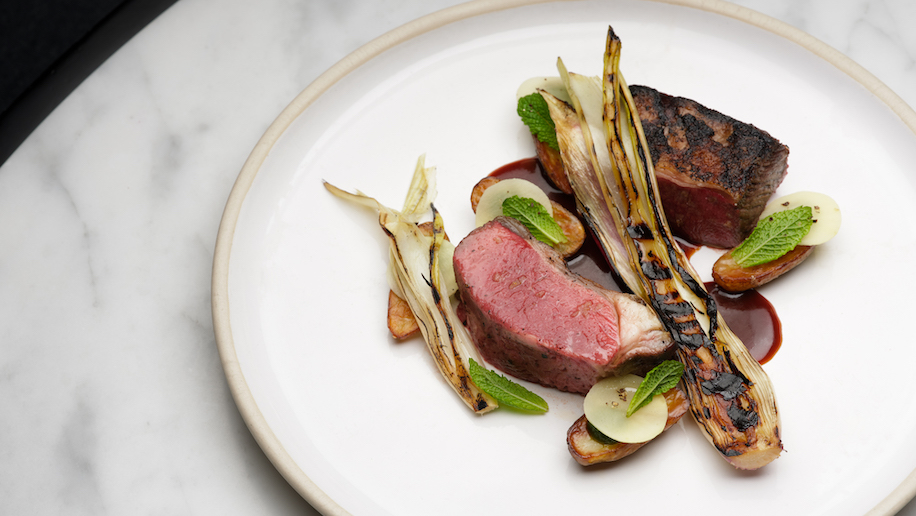 Other sides include NoMad’s take on the Swiss potato rosti. While the crispy exterior was difficult to cut through, the buttery filling of grated potato generously laden with onion was delicious.

Much like the cocktail menu, none of the dishes on the dessert list are recognisable, evidence of the restaurant’s creative flair. We were taken with the imaginative black sesame ice cream with miso encased in a chocolate shell, with a lemon compote centre and topped with frozen yoghurt. To summarise, it resembled a cheesecake. On paper, the ingredients might not sound harmonious, yet the result is tasty, addictive and artistic. The chocolate crémeux with passion fruit ice cream and coconut was also a fantastic nod to French pâtisserie. 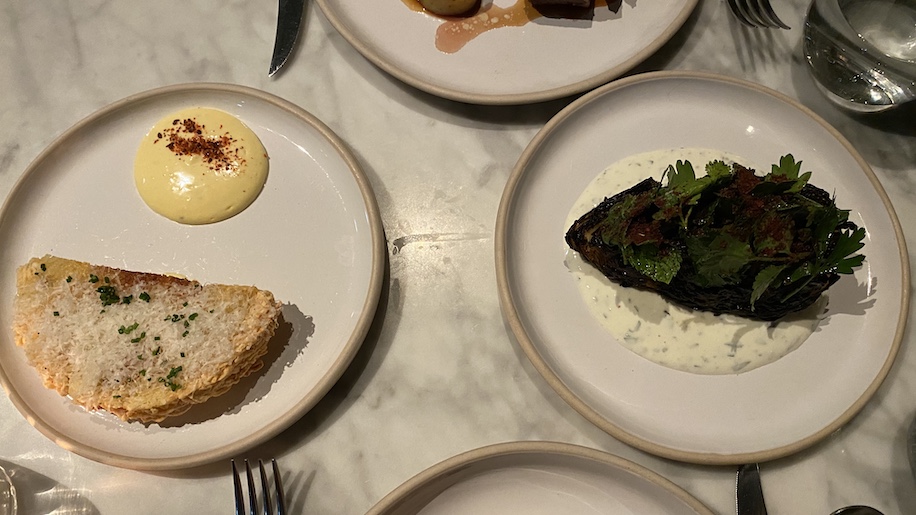 Staff were very friendly and attentive, keeping our water glasses filled throughout the meal (without disturbing us) and very knowledgeable about the menu and drinks offerings. Luca’s wine pairing suggestions for our main courses were spot on – the red Nebbiolo Costa Bassa, Sandro Fay, Valtellina Superiore 2018 from Italy, and the white Albariño Pousada Destinos Cruzados, Rias Baixas 2019 from Spain. 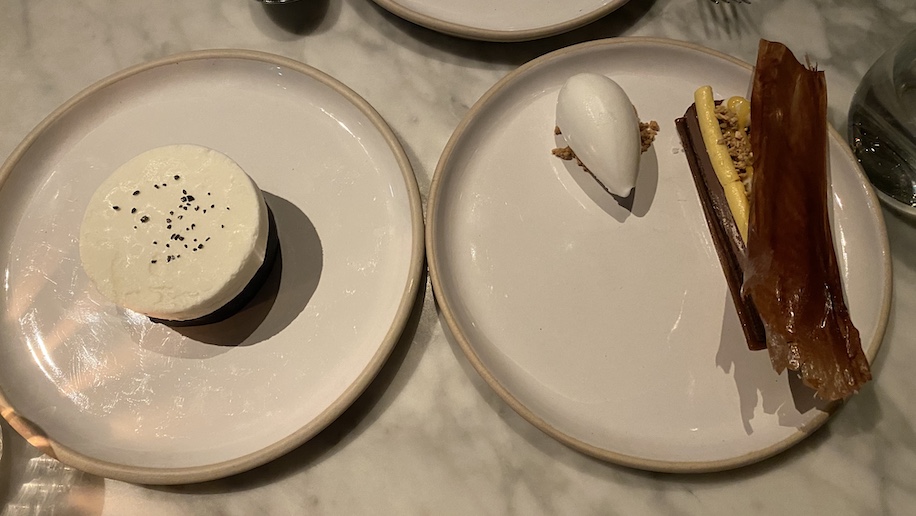 Hotel restaurants occasionally struggle to attract diners other than guests staying at the property, but there is no sign of this at NoMad – and rightly so.

The incredible architecture and complementary artistic food draws in visitors. Diners included business people, those celebrating the start to the weekend and couples dining ahead of a theatre show. Our advice: make a night of it by dressing up, ordering several of the well-crafted cocktails and enjoying the kitchen’s creative and beautifully plated dishes. 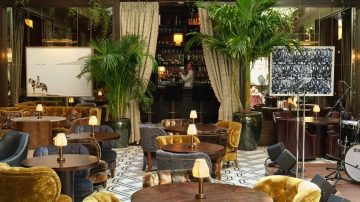 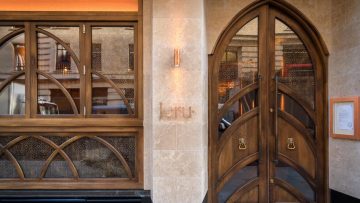 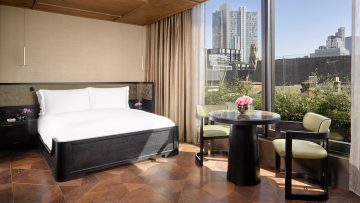