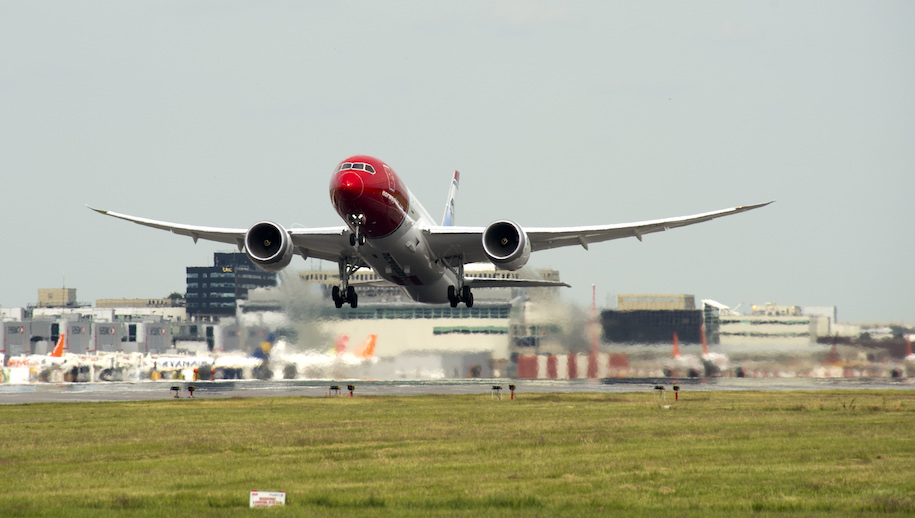 Norwegian has disrupted legacy transatlantic carriers by introducing comfortable new aircraft and low fares on key routes. One of the first, in March 2016, was to Boston from Gatwick, with prices as low as half those of many of its competitors.

Norwegian’s economy fares – which they call “LowFare” – have been the main attraction for travellers, with no business class and a small number of “Premium” seats, which are a halfway step towards business but still relatively low on frills. The economy seats come in three price tiers: LowFare (no meals and no checked bag), LowFare+ (checked bag, meals included and seat reservation), and LowFare Flex (the best and most expensive: all the previous add-ons, plus flight flexibility).

The B787-9 has proved a hit, as has Premium, so much so that Norwegian is reconfiguring some of its Dreamliners to offer more Premium seats – 56 instead of the previous 32 or 35, depending on which B787 you are in. During July and August 2018 Premium seats on this route are hard to come by, though the more expensive Premium Flex seats have ready availability. The larger Premium cabin configuration is new on the Boston route, but I was able to try the layout in economy outbound, and in Premium on return, to compare and contrast. You can read about the more expensive Premium experience here. 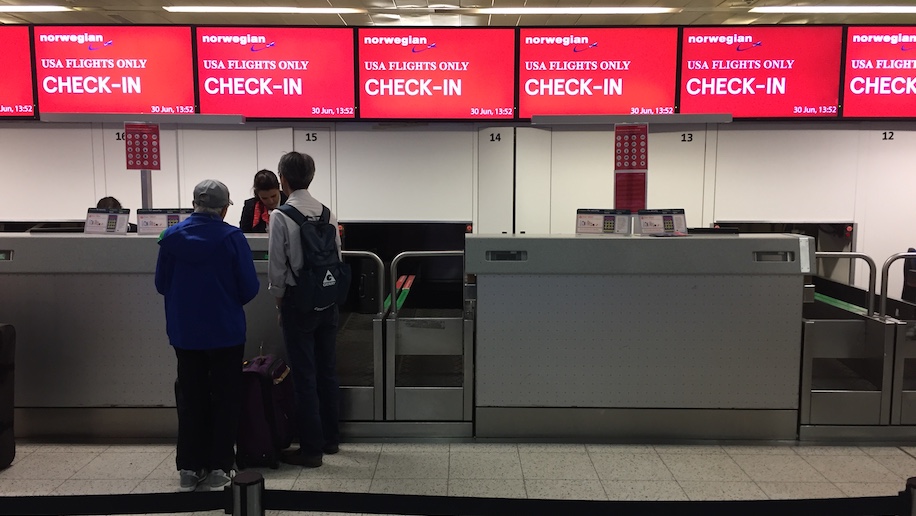 I arrived at London Gatwick at 1350 for my 1650 departure on flight DI7147 to Boston Logan Terminal E, a flight of around seven hours. Norwegian flights depart from the South Terminal, and its counters and automated check-in machines face you immediately as you enter the terminal.

I checked in easily using the automated machine and collected my luggage tag, but my travelling companion could not check in. We therefore both joined the ten-minute queue for check-in instead of going straight to the (queue-free) bag drop.

My companion’s check-in problem was resolved by a sympathetic check-in lady, who pointed out that a wrong passport had been used. My companion has more passports and identities than Jason Bourne, but the check-in lady confided that, being Cuban and having two passports, she has made this mistake herself.

The call to the gate was announced at 1530. As soon as you enter the lounge for Gate 15, you may feel an urge to use the bathroom, simply because there isn’t one. The staff are by now quite used to allowing passengers go the wrong way out through the entrance to the facilities back in the main terminal, then letting them in again (without documents).

Norwegian still had a few Premium seats spare on this particular flight. As well as emails and online auctions enticing you to upgrade from economy in the weeks prior to travel, two tannoy announcements to waiting passengers stated that “Seats are available in the Premium cabin at £250 each”. 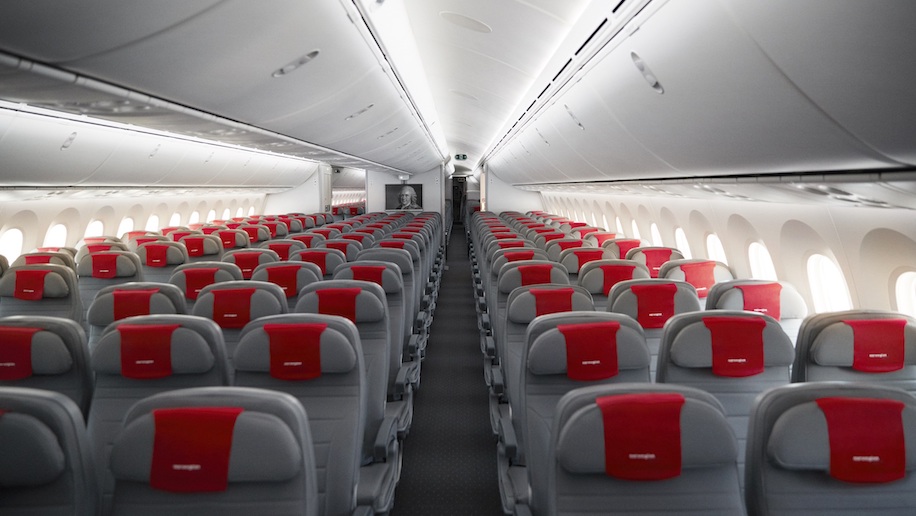 This was my third flight to Boston on Norwegian in economy in three years, so I’ve had the opportunity to try different seats. As flying economy goes I have always found Norwegian very comfortable, partly because I like the Dreamliners with their higher cabin pressure and greater humidity than older models of aircraft.

This Norwegian’s B787-9 had 282 economy seats (and 56 in Premium), with the economy seats in a 3-3-3 configuration (pictured above). The seat pitch is 31 inches, which is adequate for people of smaller stature, but I have long legs. For this reason I always seek out seats that specify extra legroom. In the case of this aircraft, row 9 can be a good one to go for, as it is a short row of just three seats immediately behind the entrance door, ie the bulkhead seats. The advantage is you can stretch out all you like –there is at least two metres of legroom. There are disadvantages with this row though. We couldn’t find any IFE screens, so did without. This didn’t concern me as I had work to do on my laptop and books to read. We later discovered these bulkhead seats did have IFE, but in a more concealed configuration than the regular seats, tucked forward below the armrests; the cabin staff failed to point this out to us. The bulkhead seats are also much colder than seats further back in the cabin – and in economy you have to pay for blankets.

My experience of the IFE on previous flights was good, and on this flight the current selection included several excellent choices: Three Billboards Outside Ebbing, Missouri; Blade Runner 2049; Murder on the Orient Express…

The power supply for your devices in economy is supplied by one USB port in the IFE screen, so it won’t be able to carry a huge current (not that you’re likely to need one). I didn’t see a single other passenger using a laptop in economy on this flight.

The three seats of row 9 are OK if you have long legs and wrap up warmly. But better are probably the front rows in each of the two economy cabins, as you then avoid the cold draught yet still have legroom.

Then there is the usual choice between aisle, window or centre. If you tend to fidget or walk around on flights the aisle seats can be best; though I prefer the window. My seat 9A had excellent views forward from the Rolls-Royce engines, with no wing obstruction. I’m not a fan of the centre seats as they seem to offer the worst of all possibilities; no view, and either the constant interruptions of the aisle or being trapped in the middle. I’d go for a window seat as close the front as you can get. 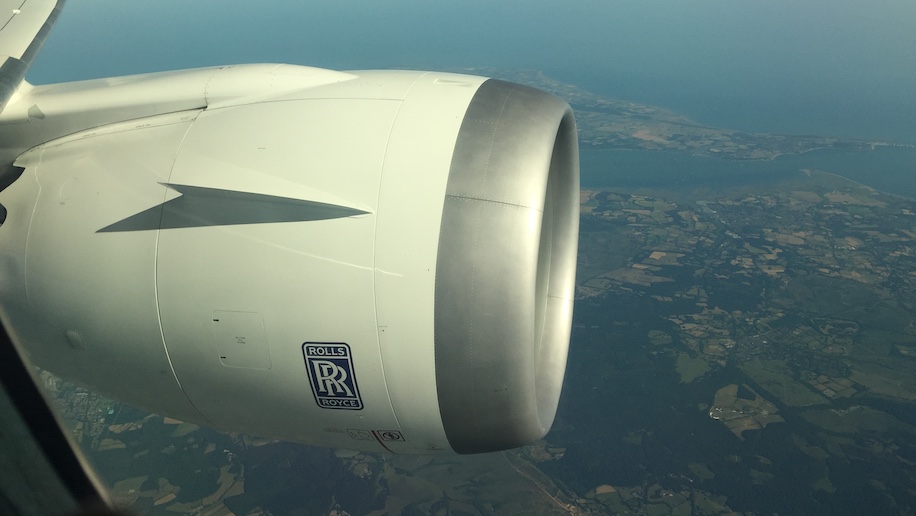 At 1650 the pilot announced that the plane was being delayed for ten minutes as luggage was still being loaded, but that we would still arrive early at our destination. Five minutes later the cabin door shut and a few minutes later the plane started manoeuvring. We took off from the runway at 1720.

Norwegian is a no-frills airline, so you can buy earphones and blankets at this point if you’ve not brought your own.

Service comes from the front of the economy cabin, right next to the cabin entrance, but staff started from the very back at 1800. It seemed nearly all my fellow passengers had also paid the extra for “LowFare+”, which includes the meal. Meals and drinks are served from a trolley, which reached the front by 1830. The “Nice & Tasty Menu” was a simple choice between chicken or beef (unless you pre-order a special menu). I’ve eaten in economy on Norwegian many times, and have no complaints. The beef or chicken meals are essentially similar, bar the type of meat. My chicken breast was slathered in a pleasantly herby sauce and served with roasted vegetables and mashed potato. A small tray of side salad came with a tiny bottle of lemon and olive oil dressing; the pudding was a toothsome dulce de leche dessert. 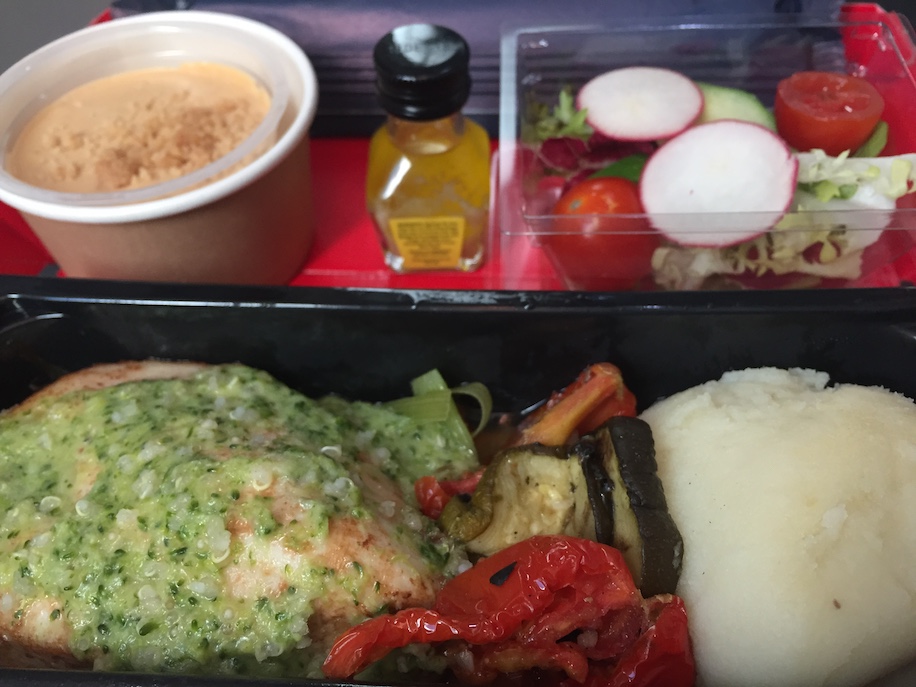 Airlines have spent decades and millions of pounds researching what sort of dish works best at altitude, and the answer is always the same: a simple meat dish in a flavoursome sauce, with some veg that isn’t overcooked. This is exactly what Norwegian serve. No cream crackers, no processed cheese, no complex spices or ingredients that require immediacy. The meal was fine.

The wine choice is similarly prosaic: when I asked what the options were, it was “red or white”. I didn’t see the bottle label, but my plastic beaker of red tasted like a French vin de pays. I consulted my companion, hoping for illumination as to provenance, grape variety and style, as she is an award-winning wine writer. “It’s fine” she said, and continued eating.

The tray table comes out of the arm of the chair and meal trays were not collected for more than one hour, effectively trapping us in our seats, like an infant in a high chair. This became tiresome as I wanted to work on my laptop or read a book, not look at a tray of debris, but eventually – an hour after the  food trays were delivered – cups of tea were brought around (with UHT milk sachets), then the trays were cleared at 1945.

At 2000 the Dreamliner’s windows were dimmed en masse by the crew, overriding the individual control passengers normally have over their window. Cabin lights were also dimmed. I turned my overhead light on, using the arm console. Should you wish to doze, no eye masks are provided, but the cabin wasn’t bright. The white noise of the aircraft didn’t disturb me at all as it as constant and inoffensive noise, but my smartphone’s noise app told me the cabin had a sound level of more than 80 decibels, even when steadily cruising at high altitude. Earplugs are not provided, so if you prefer quiet, you’ll need to bring your own.

About 90 minutes before landing, a second meal service took place. This was a filled bread roll, a piece of pre-wrapped brownie, a packet of fruit juice, served in a brown paper bag. The seeded roll was made from bland, inferior bread with a gloopy texture, while the chicken filling was as tasteless as the roll containing it, and the list of ingredients shown on its plastic wrap was unnervingly long. The brownie was better, and the juice had remarkably few additives. But this light meal was a let-down after our expectations had been raised by the very good hot meal served earlier in the flight. 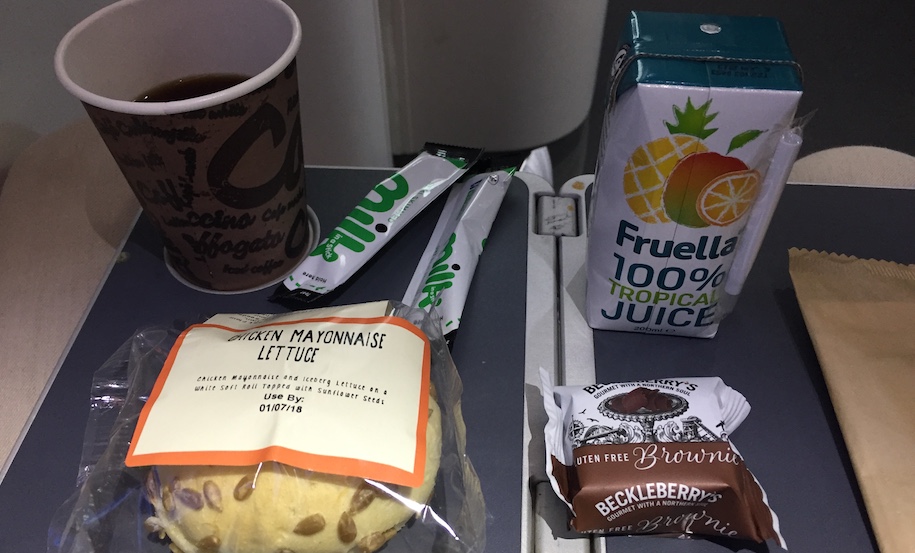 Upon landing, we waited for a long time on the runway. The captain explained that our gate was still in use and we might be held for some time. An hour behind schedule the first passengers were allowed off the plane, with premium passengers getting off first. Many times I have endured tediously long waits to get through immigration at Logan, in some cases more than an hour. This was something I solved last year by paying for Global Entry (GOES) – the Global Entry queue took a mere ten minutes to get through. GOES is complicated to set up, isn’t cheap and needs to be renewed too often, but I’m still grateful to have it.

I’ve flown economy (“LowFare”) with Norwegian many times because of the obvious appeal of low prices, top-notch aircraft and a better level of comfort than most budget airlines provide. I’ve invariably paid the extra £50 for the middle-ranking fare, LowFare+, as this includes meals, checked bags and seat reservation. Norwegian’s economy long-haul fares are cheap, but they’re not really suitable for business travellers because of the difficulties of working in comfort while on the plane. On this particular London to Boston route, Norwegian’s main competitor isn’t another airline: it is Norwegian’s own Premium service, which offers a much preferable alternative. For the review of the overnight return flight in Premium, see here.

Price: A LowFare return from Gatwick to Boston starts from £899.80 (flights outside this summer peak season can be much cheaper).