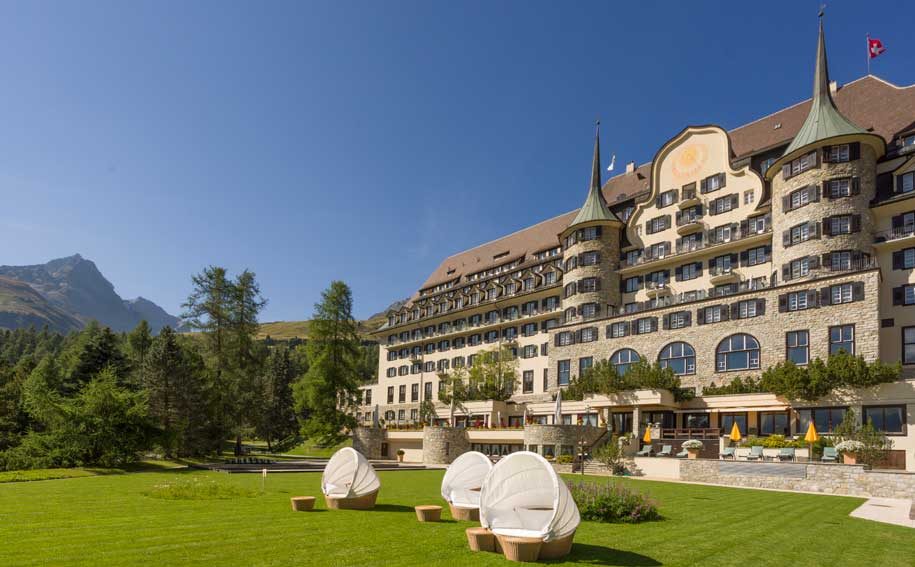 A historic hotel a few minutes’ drive outside St Moritz, Suvretta House (translated it means ‘house above the woods’) opened in 1912, built by hotelier Anton Sebastian Bon. Unlike many historic Swiss hotels, Suvretta is still owned by the same (extended) Bon/Candrian family.

It is managed by Esther and Peter Egli (since 2014), who took over from another couple, Helen and Vic Jacob who had managed it since 1989 (who had, in turn, taken it over from Dorli and Rudolf F Muller who had managed it since 1968). All this adds up to a timeless air to the place, although the hotel has been through several renovations and now has all the modern necessities for a hotel (including very fast, free, wifi). The latest renovation was by UK interior designer Sue Freeman and was completed at the end of 2017.

When it first opened, the hotel had 250 rooms, 370 beds, and 110 bathrooms with rooms for bridge and billiards, for smokers and tea enthusiasts, a library, a music salon, and several interconnected banquet and dining rooms. Seven generations later and with the addition of a large swimming pool and spa, winter ski room and even an electronic games room, there’s much unchanged including the fabulous Belle Epoque exterior with its turrets amongst the trees, though the number of rooms has dropped and bathrooms increased, thankfully.

The main areas have been renovated to reflect the hotel’s grand heritage, so don’t expect any modern pieces or edgy elements. Furniture is in ornately carved wood, sofas and carpets are traditionally patterned, and even the lifts have walnut paneled walls, carpet, a leather bench to sit on and silk-shaded wall sconces. The staircases are grand, and along the wide hallways, original portraits look down on you and walnut and teak cabinets house silver plates and goblets. There is something calming and therapeutic about the air of retrained elegance – it seems designed to assure you that you are in safe hands. I particularly appreciated the absence of piped music in any of the public areas – instead, a classical pianist plays during afternoon tea, and there are classical or jazz ensembles in the lounge every evening.

The overall ambience is formal, but the staff are friendly and informed – I was particularly impressed with the concierge who gave us detailed and accurate descriptions of the various walks available from the nearby cable cars, and helped us plan a route. Staff are dressed very smartly, and in the evening, so are the majority of the guests – in fact, to eat in the fine dining restaurant men have to wear a dark suit and tie. If that sounds restrictive, it only applies to that restaurant, and the rest of the time you can dress down. But this is a five star resort with history, and the hotel’s air of elegance is one way it differentiates itself from the competition of which there is plenty in the area.

In summer, the room rate entitles you to use all Upper Engadine resort lifts and the entire public transportation network, and in summer there is a reduction for longer stays up to 10 percent for stays of over 14 days. 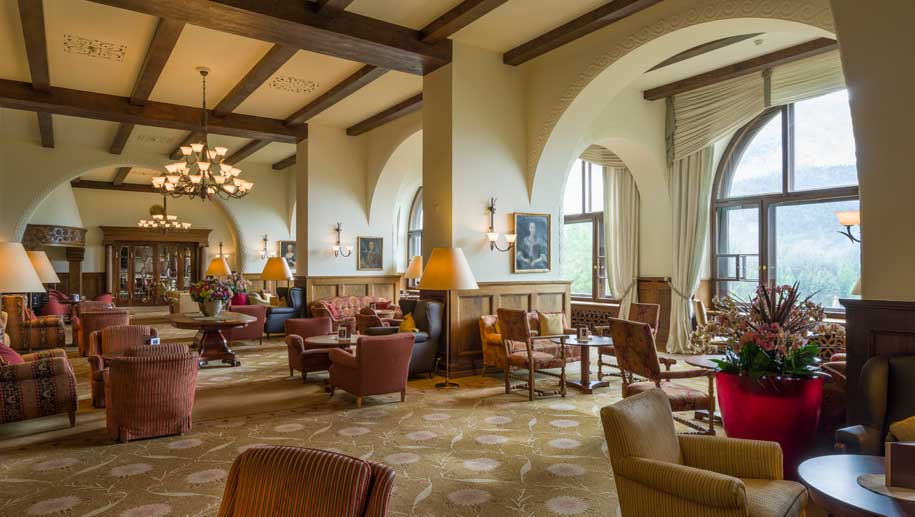 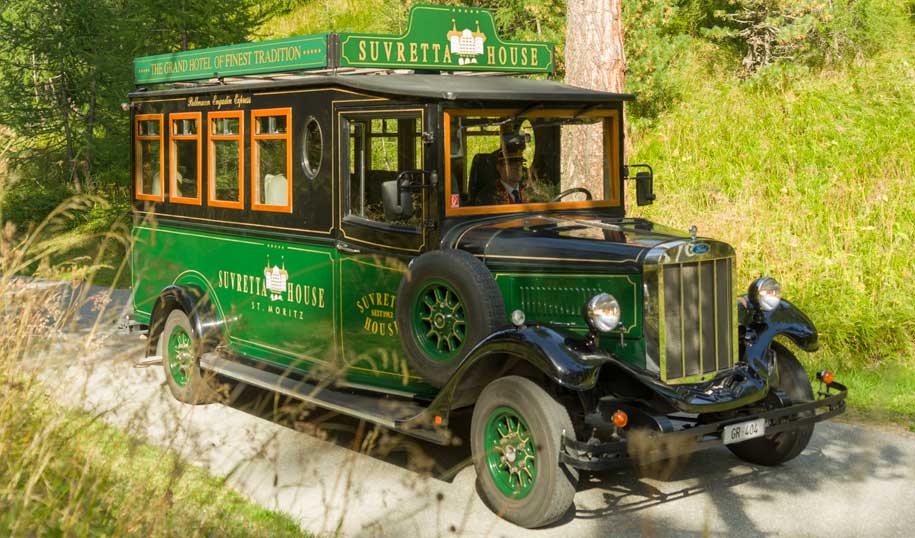 The 181 rooms and suites have views on all angles. South-facing look onto the lakes and mountains, while east, west and north overlook Mount Suvretta, parkland and the Corviglia ski area.  The décor in the rooms has a slightly more modern feel to the public areas. Colour themes are muted greys and greens, with dark wood floors softened by patterned rugs, and paneled walls painted in muted neutrals, perhaps better to showcase the stunning mountain views from every window. Bathrooms are fully tiled in marble, offering a comfortably-sized bath and shower, double sinks and separate WC. There are 32 single rooms (20-30m2); 72 standard double rooms (30-40m2; 30 Superior and Deluxe Double rooms (45-50m2) and 30 Junior Suites 55-60m2; 7 deluxe junior suites 60-75m2 and 10 suites 100-130m2. What is unusual is the generous amount of wardrobe space you get, with the large double rooms (45m2) set up to encourage longer stays and the amount of clothes you would need.

The hotel has several restaurants, from the formal to the casual. The one everyone mentions is the Grand Restaurant where you need to dress up for dinner. 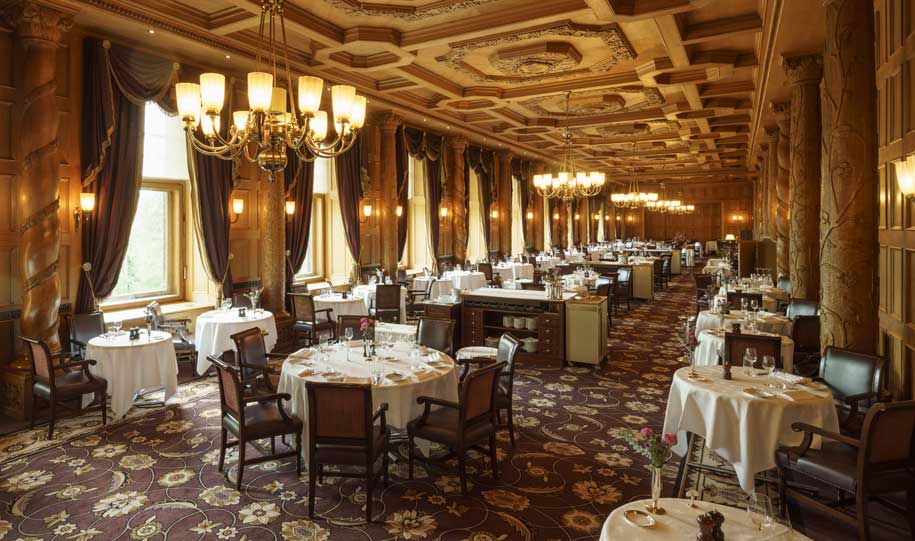 The Suvretta Stube has outstanding breakfasts, lunches and dinners, both inside and out. I was so impressed with the breakfast selection of cereals I took a picture of it, not something I would normally do. The pastries were also lovely – the hotel has its own house baker. 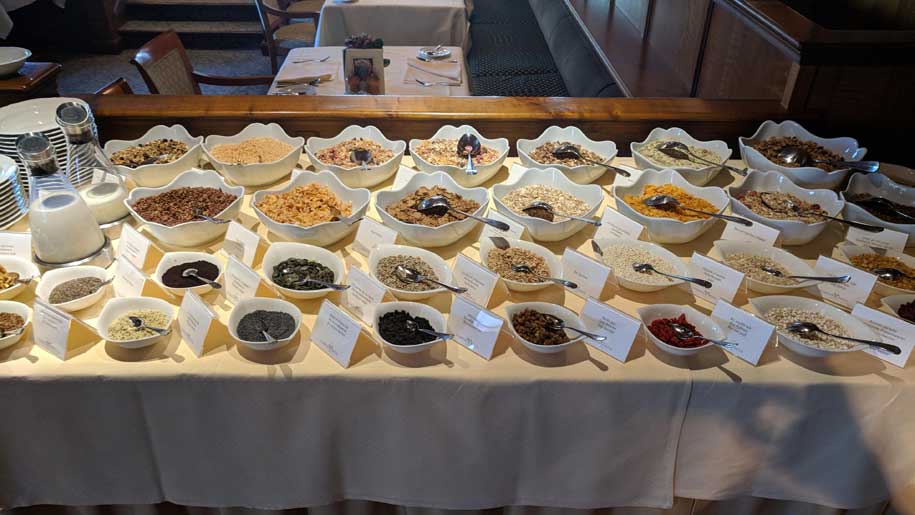 The hotel also has two mountain restaurants. A 10-minute walk up the hill is Restaurant Chasellas, open at lunchtime with a simple menu for hikers of salad, cold cuts, or a plate of spaghetti and in the evening, a full menu including mains of Trout fillet gratinated with macadamia, smoked pea puree & mint foam CHF29 / 42 and Medium grilled saddle & braised cheeks of Iberico pork with artichokes, balsamic onions & plain in pigna CHF 56. Higher still is another mountain restaurant – Trutz.  Anton’s Bar on the ground floor is open until late and the main hotel hall has two fires (in winter) and serves snacks and tea as well as aperitifs.

The hotel has a number of function rooms including the Salon Bon and Salon Segantini and seminar rooms Salon Venise and Salon Vert. There is also the Salon Conbrio can hold up to 350 people.

The walks here in summer are breathtaking, helped by the free transport pass which includes the cable cars up to the Corviglia and Corvatsch areas with dozens of walks, both easy and challenging, and all with outstanding views. The hotel organises a free guided walk and picnic every Wednesday, accompanied by the general manager. He told me that one of the longest serving staff members, Robert Jagisch, had retired at Christmas after 40-odd years. A guest in his 50s who was with us laughed and said he remembered them starting. It was a reflection of the loyalty of both sides of the hotel. The picnic was another example of the attention to detail, with some traditional Swiss risotto (saffron-infused) cooked in a giant copper cauldron over a fire.

There are activities every day, including yoga and pilates, guided Nordic walks and sailing on the lake and golfing. Lots of hotels say they have a tennis court, but Suvretta has three superbly maintained clay courts and a tennis professional giving lessons. In winter, this becomes the famous ice rink. The hotel is also genuinely ski in and ski out. There is a large indoor pool with great views out over St Moritz, a full wellness centre, an outdoor jacuzzi (overlooking the tennis courts as well) and lovely grounds with a large chess set and canopied day beds on which to take in the astounding views. 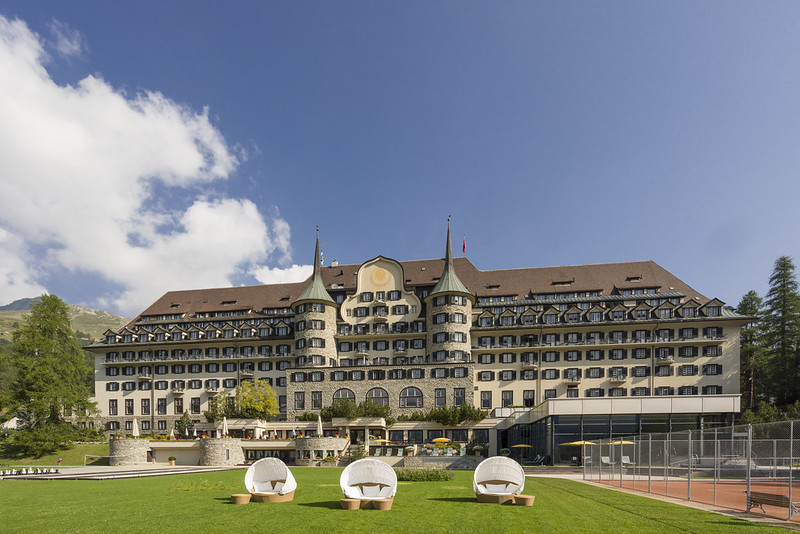 There aren’t many hotels where, within a day or so of staying, you realise why people return year after year, generation after generation, but Suvretta makes it very clear why. The painstaking attention to detail, excellent staff and timeless elegance, all bolstered by continuous investment means this really is a hotel that lives up to its reputation. 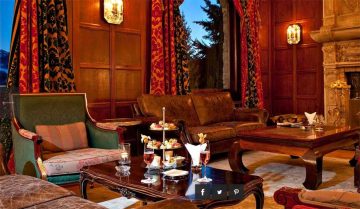 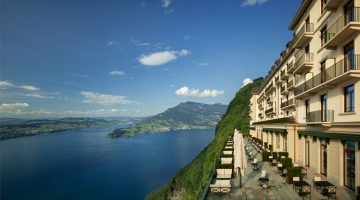 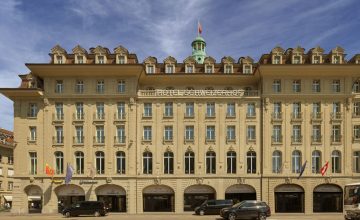 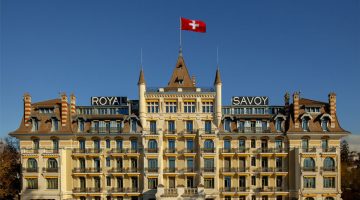