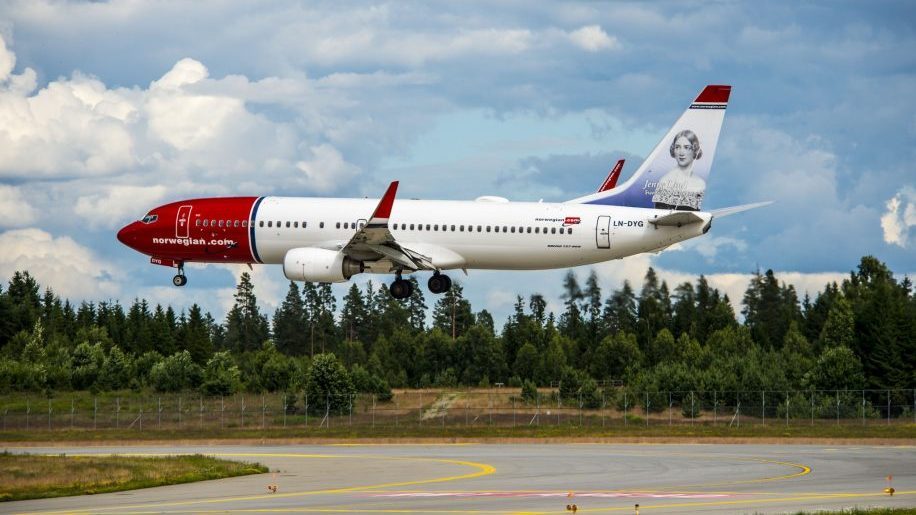 I had checked in online the night before via Norwegian’s Travel Assitant app, which allowed me to download my boarding pass onto my smartphone. The next morning, I arrived at Gatwick at 0740 for a 0920 departure to Oslo. There were lost of people queuing at the Norwegian’s check in kiosks and bag drop when I arrived at the South terminal, and I went straight up to Departures where I was met by an even larger crowd at security – though the queues were moving rapidly. Gatwick staff were extremely efficient at processing passengers, and though both of my wheelie case and rucksack were stopped and checked, I was airside by 0805.

My gate wasn’t showing when I first got to the main concourse, but checking again at 0850, it showed that boarding had started at gate 2. I followed signs for Gates 1-5 and arrived at the gate at 0900. The queue was slow moving, so I waited until there were a handful of people left and boarded from the front of the plane.

Seats on the B737 are configured 3-3, with a 30-inch pitch, 17.3-inch width and a three degree recline. I was in 1A, at the bulkhead by the window. This is an awkward seat, as the wall of the plane curves inward at standing height, which means you have to be careful not to hit your head on the wall, tilting to the right as you stand up. While the seat itself felt quite narrow, I had plenty of legroom. It was upholstered in charcoal grey leather, with a red headrest protector.

I was on board by 0915, though the flight didn’t take off for another forty minutes, which the captain said was due to a no-show and their bag having to be offloaded. The disadvantage of waiting to board last was that I had to store my bags in the lockers above seats 5 and 6 a few seats away, but this wasn’t too inconvenient. We pushed back at 0930, and after taxing for 15 minutes, were airborne by 0950. Crew came round with drinks and snacks to purchase at 1030 – I didn’t buy anything as I had eaten at the airport, so I worked on my laptop, using the airline’s free wifi service for the rest of the flight.

The captain came on over the tannoy at 1215 to announce that we had begun our approach and we landed shortly after at 1230, five minutes after our expected arrival time. After retrieving my bag from the locker a few seats behind me, I exited the plan via airbridge, and was directed to passport control. There was a queue here, but after five minutes an attendant ushered EU citizens through to a separate line and I was through to Arrivals by 1250. With only hand carry luggage, I bought a ticket for the Flytoget airport express train and was on my way into central Oslo by 1315.

An efficient and trouble-free service, with the added USP of free and good quality wifi.