Emirates says it has cleared nearly 650,000 refund requests in the last eight weeks, with a further half a million set to be processed with the next two months.

Back in April the Gulf carrier pledged to clear half a million requests by August, and the airline now says that it passed the target by early June, “after expanding its processing capability from an average of 35,000 requests a month, to nearly 200,000”.

Referring to the coronavirus pandemic as “a black swan event no-one expected”, chief commercial officer Adnan Kazim said that cash had been ringfenced to honour refunds, and resources invested to expedite processing.

“Our average processing time for refunds has reduced from 90 days to 60, and as we see lower volumes of new requests we expect this rate to further improve. We still have over half a million refund requests to manage, and expect to clear these within the next 2 months.

“We’d like to thank our customers for their patience and trust, and to those who have opted to hold their ticket or rebooked to travel at a later time – we look forward to welcoming you onboard soon.”

Last week Irish low-cost carrier Ryanair said that it was making “rapid progress” in processing customer refunds for flights cancelled between March and June as a result of Covid-19, with 90 per cent of the backlog set to be cleared by the end of July.

Emirates has gradually been rebuilding its network following the easing of global travel restrictions, and is now offering flights to around 50 cities.

The carrier has also resumed its chauffeur drive service at Dubai International, and has begun reopening its lounges at the airport. 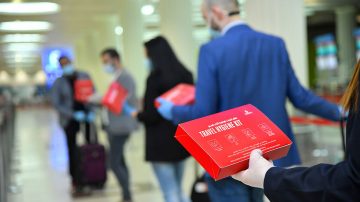