Ryanair has expressed concern at the continued uncertainty surrounding the UK’s departure from the EU, warning that the lack of clarity may force it to move “some or all” of its UK-based aircraft to the continent.

In a statement announcing a 55 per cent rise in first quarter profits, the carrier said it is seeking clarity on “the legal basis for the operation of flights between the UK and the EU” post-Brexit, before it publishes it summer 2019 schedule in the second quarter of next year.

Ryanair said that if certainty was not forthcoming “by autumn 2018”, it may be forced “to cancel flights and move some, or all, of our UK based aircraft to Continental Europe from April 2019 onwards”.

The airline said it continued to campaign for the UK to remain in the EU Open Skies agreement, but added that it had “contingency plans in place and will, as always, adapt to changed circumstances in the best interests of our customers and shareholders”.

Away from Brexit Ryanair said it expected fares to fall by an average of 8 per cent in the second half of 2017, adding that “we expect the pricing environment to remain very competitive into H2 where we will grow traffic by approximately 7 per cent”.

CEO Michael O’Leary welcomed the rise in profits in the first quarter, although he cautioned that “the outcome is distorted by the absence of Easter in the prior year Q1”. Traffic grew 12 per cent over the period to 35 million.

The carrier launched its flight connections service at Rome Fiumicino in May, followed by Milan Bergamo this month, and has started to sell long-haul Air Europa flights on its website, ahead of a planned connection service between the two airlines. 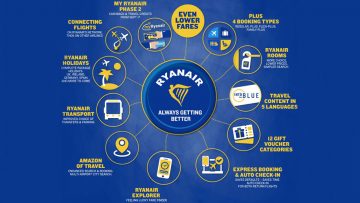