Check-in This was only the second week of the new Seoul service and this cold clear Saturday morning I arrived at the Heathrow’s Terminal 5 at 1030 for the 1300 departure on BA17 to Incheon, a flight of some 11 hours.

I was part of a large group of media on the flight, along with BA staff and Willie Walsh, CEO of IAG. I dropped off a bag and went through fast track, which was extremely slow – 15 minutes for me, with other members of the group claiming times of up to 30 minutes, with one in four bags being chosen for extra searches or security screening.

The lounge I went into the Galleries South lounge and had some coffee and pastries while waiting for the flight to be called.

Boarding The gate for this service is scheduled to be C but for this service was moved to A18, so we walked down the escalators, turned left and were quickly at the gate. On the airbridge I stopped to take a photo of the flags sticking out of the pilot’s windows. The seat This was a B777-200 aircraft with four classes. Business class was in one cabin – rows ten to 15. I was in 15J, an aisle seat. To see a seatplan click here. (Note that one change to this seat plan is that seat 4K is missing, meaning there are actually 13 First seats rather than 14.)

My seat had a very wobbly armrest on the aisle side, and the headphone socket was slightly damaged meaning I had to keep it toggling it to hear the sound on the in-flight entertainment. The in-seat power worked fine though (a US adaptor was needed for a UK plug) and so I worked during the flight.

Which seat to choose? Choosing the best seat in Club World is a matter of preference, but for privacy I would always choose a window seat, and on this flight one of either 15A and 15K, since these are the only window seats which have unimpeded access to the aisle. I asked the passenger sitting in 15K if he had chosen the seat for that reason, but in fact he had been assigned it – lucky indeed.

The flight My jacket was hung up for me and I was offered a choice of water, orange juice and champagne, and then a selection of newspapers including the Financial Times, The Telegraph, The Mail and The Times. We pushed back from the stand on time, but it was a long wait for take-off, and this happened at 1325. Once airborne the Elemis amenity bags came round with flight socks, an eye mask, earplugs, toothbrush and paste, and moisturiser.

The crew were young (to this old man in his mid-forties – mixed fleet, I think) and were excellent throughout the flight. One note: Korea has some strict policies for customs, and though you can buy two litres of spirits on board, for instance (and of course may have bought various items at Heathrow), the limits for bringing into the country are only one litre of spirits, and a small bottle of aftershave, so a large bottle such as 100ml of aftershave would have to be declared.

Willie Walsh spoke to the assorted media during this flight and, in particular, addressed the possible purchase of Singapore Airlines’ 49 per cent share in Virgin Atlantic by Delta – for more details click here.

The meal service started promptly, and we were offered the “Balanced Choices” menu, as follows:

The layout of the wine menu is better than the old one since that one seemed to create expectations that all the wines listed would be on-board (despite a note pointing out that they wouldn’t). This one is simpler to read and they are all available.

Since this was a lunchtime flight which landed, UK time, around midnight but close to 9am Korean time, I tried to sleep and dozed for a few hours, then watched a two-part documentary about Australian tent fighting, which was very enjoyable. About 90 minutes before landing, breakfast was served, though this was termed a “Light Meal”.

Arrival The flight arrived on time and we had a brief pause for the flags to be pushed out of the pilots windows then taxied onto the stand. Once there we had a short walk to the transfer train, and then a long wait at immigration – 15 minutes – because the computer terminal in our queue had to be rebooted just as we got to the head of the queue. These things happen, but it would have been good if we hadn’t all been issued to the back of the queues around us to begin our wait once again, this time behind the passengers of a plane which had landed long after ours. Not surprisingly by the time we got through immigration our bags were waiting for us.

Verdict A good flight – the seat was a bit battered, but it was comfortable both as a seat and a bed and the service was friendly and efficient. 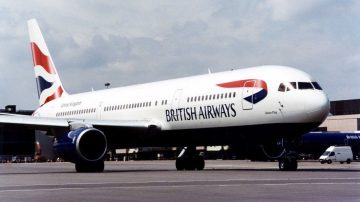