I arrived at Heathrow Terminal 4 at 1015 for my 1150 departure on SU2571 to Moscow Sheremetyevo, which has a flight time of three hours and 20 minutes. There was no queue at business class check in and I checked in one bag which was then through checked to my destination – Yerevan in Armenia.

I then went through fast track security, which was again, very quiet at this time. I spoke with someone who said that one of the reasons was the loss of the Jet Airways flights which had made a big difference, since up to 1,300 passengers had been carried on those flights.

As a Skyteam member, Aeroflot uses the Skyteam Lounge at Terminal 4. Downstairs was busy – this is where at this time the hot food and also the alcohol are – the upstairs was almost empty, so that’s where I went. We’ve reviewed the lounge many times, and it recently celebrated its ten-year anniversary. Here’s our news piece from when it opened in June 2009.

We have also published a video walk around of the lounge here.

Boarding was delayed because of the late arrival of the aircraft, but after around a 20-minute delay we were boarded with business class and Sky Priority coming first.

I’ve flown this route to Moscow a couple of times recently with Aeroflot, but both of those have been on a wide body aircraft, so it was good to see the narrow-body options.

This is a review of the A330 option on this route

And for those interested in the other wide body long haul option, the B777-300ER, see this review (although this was down to Hong Kong, so a very different journey).

As luck would have it on the four flights I flew in one week, getting to and from Armenia via Moscow, I experienced two of the B737-800 aircraft, and also an A321 and an A320, so I will post all of those reviews here and links to them as they go live. Each one was different except perhaps these first two flights, since these were on B737 with identical (to my eyes) seats and inflight entertainment.

I was in seat 1A, which wouldn’t have been my choice of business class seats, as you have to put your bags up into the overhead locker for take off and landing, unlike a few rows back where you are able to tuck them under the seat in front. In addition, you frequently can’t fit them in the overhead locker right at the front, and so have to move quite a way back. This time I was lucky, and by just moving some jackets and other items I got a place for my bag.

The seat is a comfortable cradle seat which reclines and is upholstered in a blue leather with an orange antimacassar. There is a table which comes out of the arm which bounces a fair bit if you try and work (or eat) on it, and my one sloped as well. There is a remote control for the inflight entertainment, which can also be controlled by touching the screen – as I was in the front row my screens was on the wall in front of me. 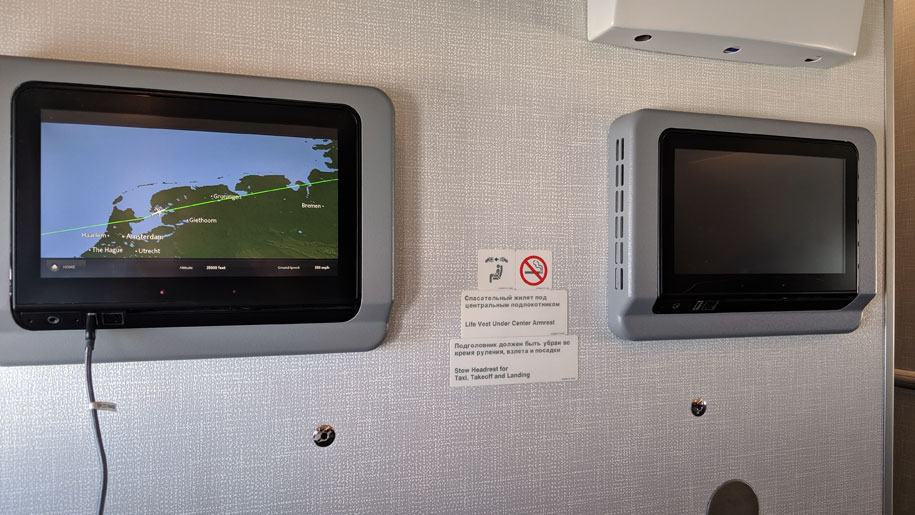 The range of films and entertainment available on the system was astonishing for a short haul aircraft – dozens of films recently released in the cinema, and also television and music. It was more akin to a long haul flight and I could have watched several of these films (though I didn’t). You could also charge your device from the in-seat power which took EU, UK or US plugs.

The flight had wifi, but it seemed to be about delivering content directly to devices on board rather than allowing surfing, so I could have watched films on my laptop or mobile, but not used the internet to surf or get emails.

In business class I’d go for one of the rows in the middle of the section – maybe 2, 3, or 4, and perhaps an aisle unless you like looking out of the window (I do). 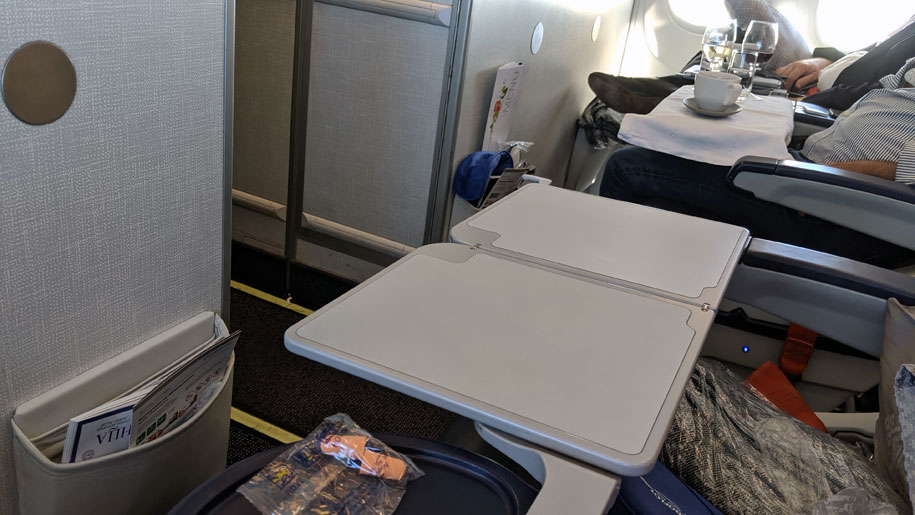 Once on board we were offered a choice of champagne, water or orange juice, there was the offer of my jacket being taken and hung in the wardrobe at the front, and a menu and wine list were presented. There was also the offer of a cold towel. Several of these were offered during the flight.

We taxied for a while and eventually took off at 1240. By this time my neighbour in 1C had kicked off his shoes and crossed his legs, so his socked foot was way too close to me. Luckily, he had trouble working his IFE (it was broken) and so moved across to a spare seat in 1F. Very bad luck for the gentleman who had spread out in his window seat, he got the socks for the rest of the flight.

It took quite a while for the seatbelt sign to be turned off – perhaps 25 minutes after take-off, and then I got out my bag and started to work. Because I then had the seat next to me free I could have the meal set up there while I worked. 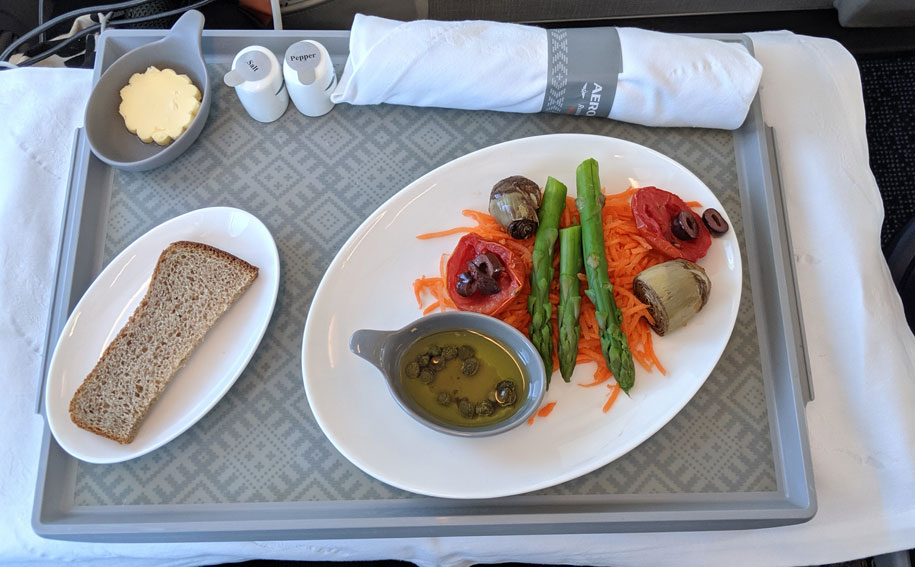 All of the options on the menu include full dietary information including protein, fats, carbohydrates and calories. The menu also had an invitation to rate each course on a scale of 1 to 5 (a ‘1’ being very poor, ‘5’ being excellent) and handing this to the crew at the end. This menu was devised by Kamel Benmamar who is a brand chef at a Novokov restaurant in Moscow called “Ryby net” which means “No fish”. Despite this, fish was offered on the menu, but perhaps there’ a joke there I missed.

The menu was an appetizer of roasted almonds and cashews, then a cold starter which was a choice of a vegetable platter of pickled artichokes, tomatoes, carrot, steamed asparagus, served with sherry vinegar, or scallops with cucumber and greens served with Japanese sauce.

I had the vegetable platter which to be honest was uninspired and didn’t have much taste. The sherry vinegar tasted more like olive oil to me. I gave this a ‘2’. 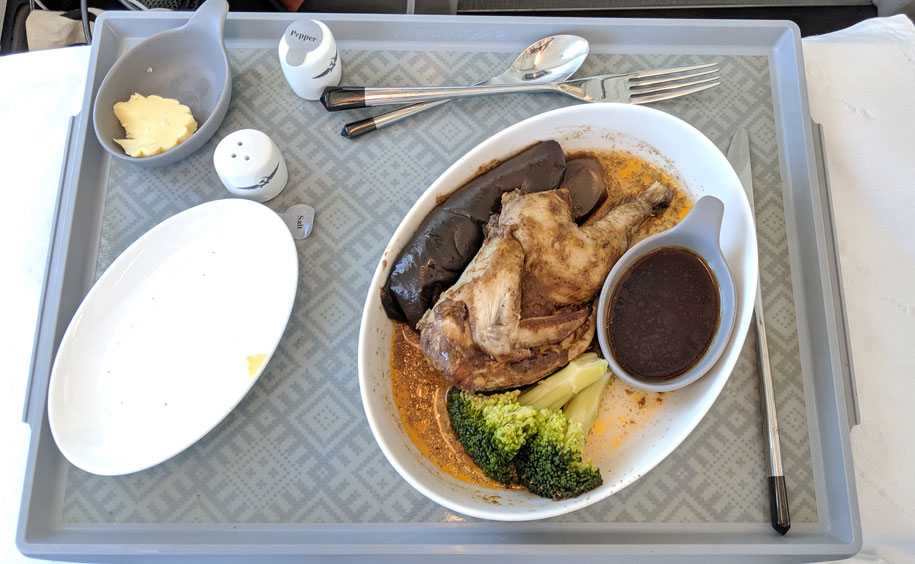 The main course options were salmon with wild rice, mushrooms and tomatoes, served with pumpkin sauce, or chicken with eggplants and broccoli, served with chicken sauce, or tortellini with ricotta and spinach, served with cream sauce. I asked about the chicken before ordering and was told it was fried, which sounded intriguing, but unfortunately it was a bony bit of chicken in a watery sauce and wasn’t very tasty at all, so I left it. This got a ‘1’.

There was also a bread basket – several types including Russian rye bread or pretzel roll. The dessert was a lemon cake and there was also a wide choice of Greenfield teas and also some coffees. 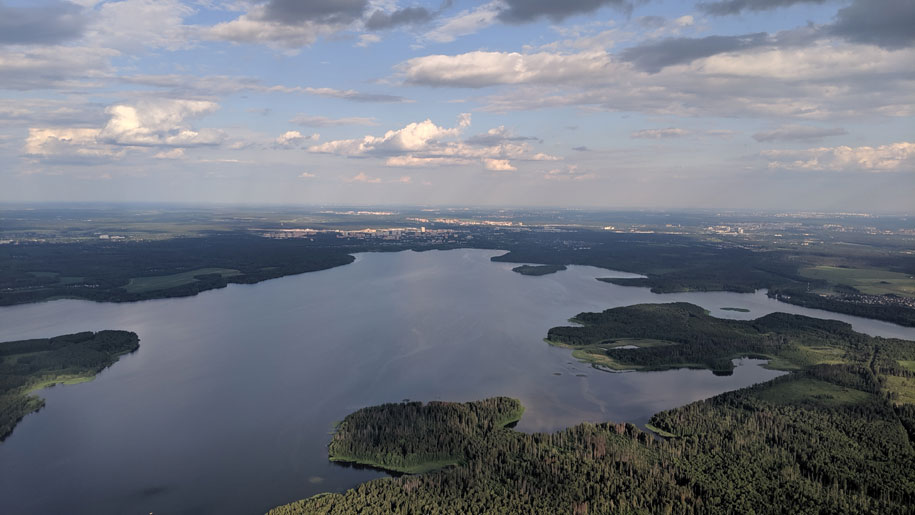 We arrived late at around 1820 rather than 1740, and then there was a further 20 minute delay waiting for stairs that then took us down to the bus at the airport, so there were some quite agitated passengers who had missed their tight connections. (The Minimum Connection Time at the airport is between 50 minutes and 90 minutes, depending on whether you are connecting within terminals or between them, and whether going on to another international flight or somewhere within Russia.)

My next flight wasn’t until 2050 so the late arrival didn’t affect me, but it is worth bearing in mind that delays can happen and tight connections are rarely a good idea if you can avoid them. The seat is comfortable and allows you to work throughout the duration, and the inflight entertainment has a wide choice.

The only disappointment was the food, but perhaps I was just unlucky. On other Aeroflot flights it has been better than this. On this and the other flights I took that week with Aeroflot, the service was uniformly excellent. 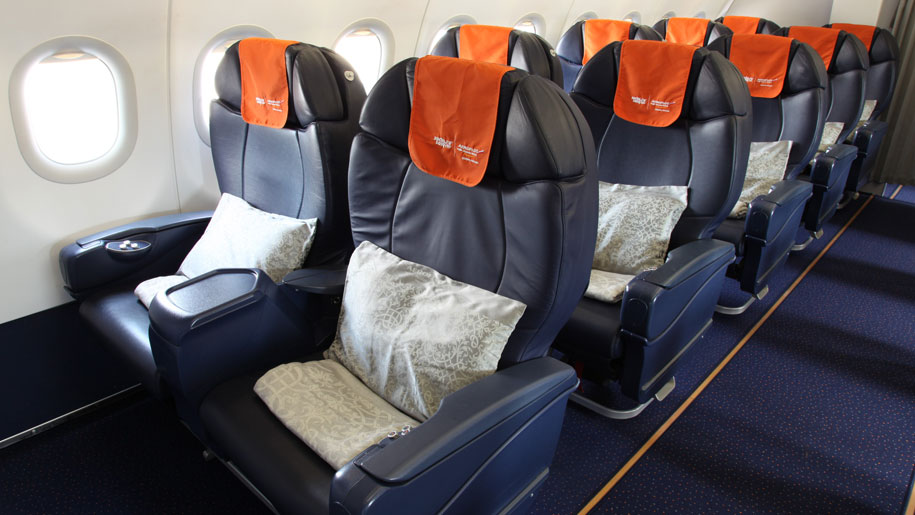 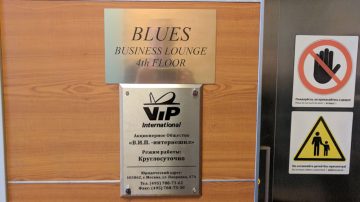