Aeroflot has a wide range of both narrow-body and wide-body aircraft, but to Yerevan – which is a flight time of some three hours – it is narrow-body, and, depending on the day of the week, this may be either Airbus or Boeing aircraft.

This review picks up the journey from Moscow Sheremetyevo airport. 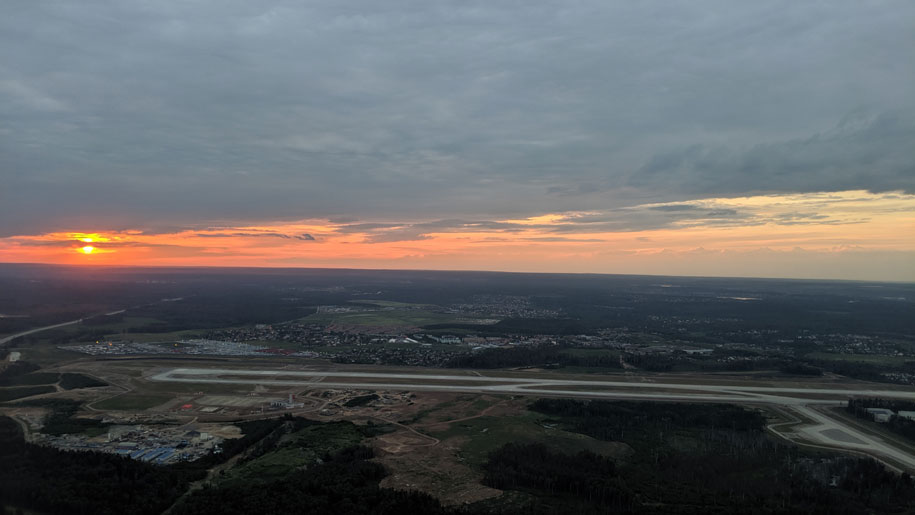 I was connecting from a London flight on to my flight to Yerevan, which has a flight time of around two and a half hours. Our flight from London had arrived late, but I had plenty of time. For connecting flights you have to go through a passport control, show your onward ticket and then go through another layer of security before descending via stairs or lift to the main concourse where there are duty free shops , restaurants, cafes and the gates of Terminal D.

There are several Aeroflot lounges at Sheremetyevo airport. I chose the Moscow lounge because it was the closest to the gate 30 where my flight was departing, and also I had spent a couple of hours there in January waiting for a morning flight.

The Moscow lounge is one large room with a raised area at one end. There are plenty of places where you can charge devices and a good choice of both hot and cold food as well as drinks. It was busy on this evening, but I had no problem finding a place to relax for a couple of hours until my flight was called (all Aeroflot flights are called).

We boarded at just after 2000 for the 2050 departure to Yerevan, Armenia, and, after a short delay because of a passenger with a problem with their ticket, were on board quickly.

Again, this was a very busy flight, with few seats free in either economy or business class. Once on board we were offered a choice of champagne, water or orange juice, there was the offer of my jacket being taken and hung in the wardrobe at the front, and the menu and wine list were presented. There was also the offer of a cold towel.

I was in seat 4F, a window seat. The seat is a comfortable cradle seat which reclines and is upholstered in a blue leather with an orange antimacassar. There is a table which comes out of the arm. My seat had a good quality table so I could work without any problem.

Like the first flight to Moscow, the aircraft had an excellent inflight entertainment system. The range of films and entertainment available was astonishing for a short-haul aircraft – dozens of films recently released in the cinema, and also television and music.  I could have watched several of these films (though I didn’t). It was also possible to charge your device from the in-seat power which took EU, UK or US plugs.

The flight also had wifi, but it seemed to be about delivering content directly to devices on board rather than allowing surfing (see above), so I could have watched films on my laptop or mobile, but not used the internet to surf or get emails.

Instead I looked up some details about carbon offsetting…

In business class I’d go for one of the seats in the middle of the section – maybe 2, 3, or 4, and perhaps an aisle unless you like looking out of the window (I do).

We had been boarded in good time and were away on time. A child in the cabin screamed in a high voice for the first 30 minutes all the way during boarding, taxiing and then inflight. I don’t think they were in distress, since occasionally they were laughing, but the high-pitched noise would have been unbearable if it were not for a pair of ear plugs and then some very good noise cancelling headphones and some quite loud music. And even then I could hear it very clearly. 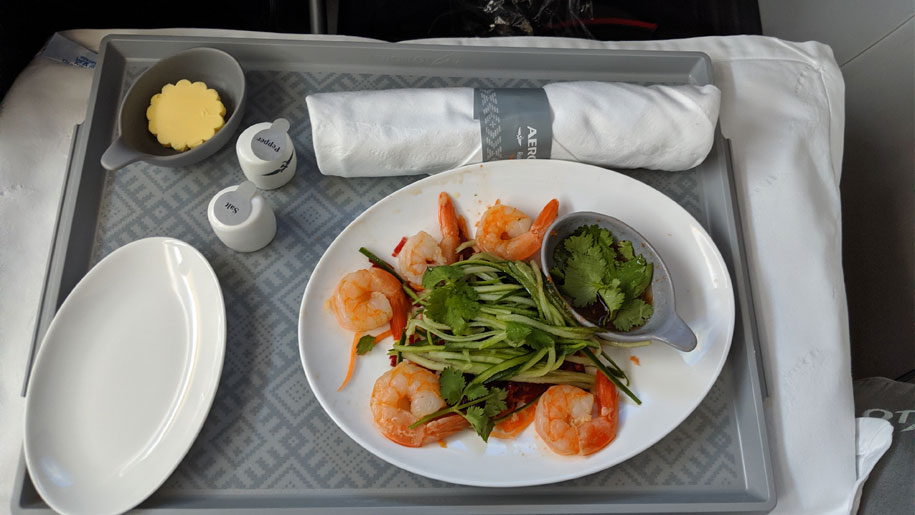 All of the options include full dietary information including protein, fats, carbohydrates and calories.

The menu also had an invitation to rate each course on a scale of 1 to 5 (a ‘1’ being very poor, ‘5’ being excellent) and handing this to the crew at the end.

The appetizer was roasted almonds and cashews. The cold starter was either cured goose meat, served with fruit or prawns with fresh vegetable mix, served with sweet and sour sauce. I had the prawns (see picture above) which were tasty. The menu asks that you give a mark out of five for each course (although they don;t collect the cards at the end, so I’m not sure the purpose). On the way out I didn’t like the food and so gave them low marks. This time it was better, so I would give this a 4 out of 5.

The main course options were halibut with pumpkin, asparagus and tomatoes, served with carrot sauce, or beef steak with filini pasta, tomatoes and mushrooms served with red wine sauce, or bulgur with vegetables. I went for this last one which was tasty, so tasty in fact that I forgot to take a picture of it (again, I’d give this a 4 out of 5). There was also a bread basket – several types including Russian rye bread or pretzel roll.

The dessert was vanilla ice cream with almond flakes. The food was better than on the first flight from London to Moscow.

The wines were the same as the flight from London to Moscow, apart from a change to the Champagne which was Drappier instead of Lanson.

After the food I watched a film as the flight passed and then finished some work (there was plenty of room to do so).

We arrived on time in Armenia at just past midnight – there is a time difference of one hour with Moscow.

An excellent flight with no drama, and a good way of arriving into Yerevan Zvarnots Airport.