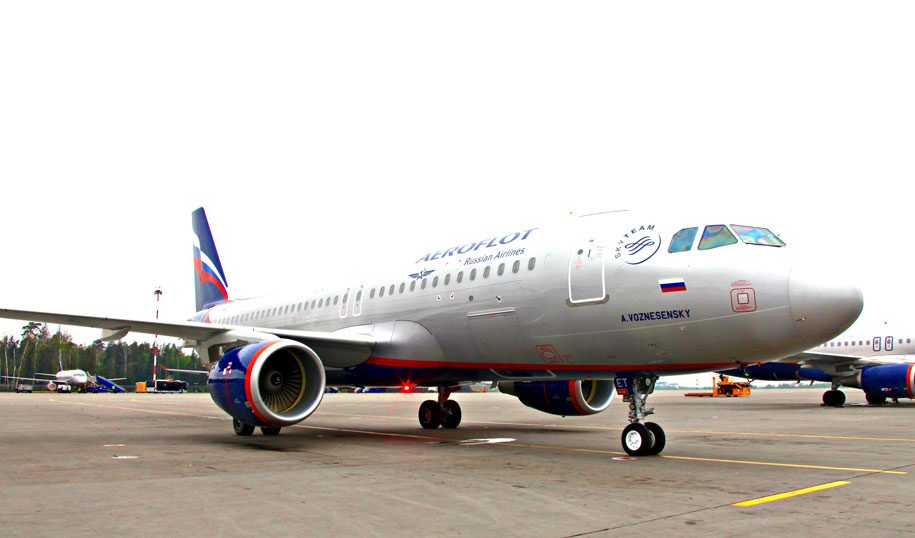 Yerevan does not have many daily flights for connections, but Aeroflot is one obvious choice, flying daily to the Armenian capital and then having a return flight from Yerevan timed to make connections throughout the world and, importantly for European connections, in time for the morning flights departing Moscow.

I arrived at Yerevan’s Zvartnots International Airport at 0320 for the 0505 departure on SU1867 to Moscow, a flight of around three hours. There was a priority queue for business class and Sky Priority, and I dropped off my bag and was given my boarding passes for both Moscow and London and also an invitation to the business class lounge at the airport. Immigration is slow here (unlike on arrival, when it was quick), and we queued for about twenty minutes before getting through to security, which was quick. I then went to the lounge.

The lounge is easy to see, but not so easy to find until you realise the stairs (and lift) up to it are in the middle of the Duty Free shop, so once you have walked through, look up, and then double back to find them – they are in plain sight if you know where to look). The lounge is called the Converse Bank Lounge. It had a selection of snacks and cold food including sandwiches and cereals, and plenty of places to sit at this time of the morning. You can look down to the gates, and the receptionist said they call the flights, though I left the lounge when I could see people beginning to board.

We boarded at 0430 with Sky Priority and business class going first.

On the way to Yerevan a few days earlier we had flown on a B737-800. You can read a review of that flight below.

For this Friday morning flight back there was a change, and we were on an A321 aircraft, perhaps because the flight was slightly busier and so a slightly larger aircraft was required.

In contrast to the B737-800 aircraft, the A321 (and A320) has slightly older seats. The business class cabin was slightly smaller – just four rows of seating in a 2-2- configuration, and although the seats were similarly comfortable, there was no in-seat power or inflight entertainment.

Each seat has a foot rest coming down from the seat in front (apart from the front row where it comes out from beneath the seat). 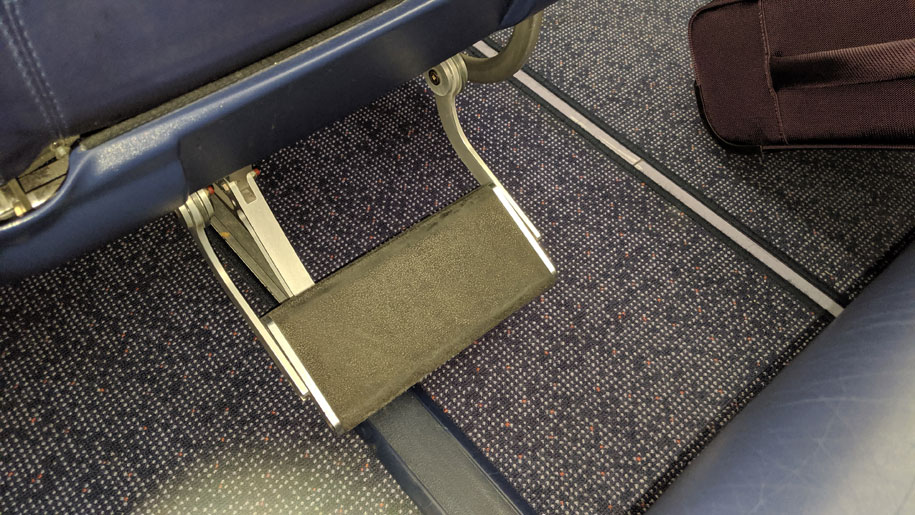 The seat had three main controls, for recline, for moving the seat cushion forward, and to increase the lumbar. 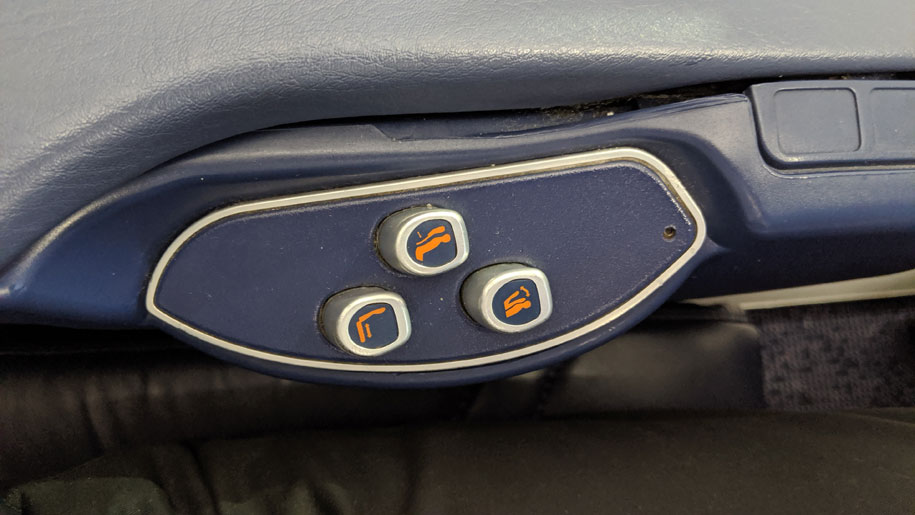 I’d avoid the front row because I like having my bag at my feet which isn’t possible there. Otherwise all the seats are fine – I prefer window seats so I don’t get disturbed, but if I had a large cabin bag which had to be stowed overhead, I would go for an aisle so I could get up and access that.

I was welcomed on board, offered a drink of water, orange juice or champagne, and then was given a flight kit including slippers and the bright blue Aeroflot amenity bag, which has moisturiser, lip balm, a comb, a shoe horn (very useful, those) and an eye mask. Ear plugs are offered separately.

The flight attendants, both male and female, spoke good English once they’d realised I was not Russian (or, presumably, Armenian), and were helpful in explaining the menu (see below).

The pilot told us the flight time would be two hours and fifty minutes, and then we taxied out and were quickly away. 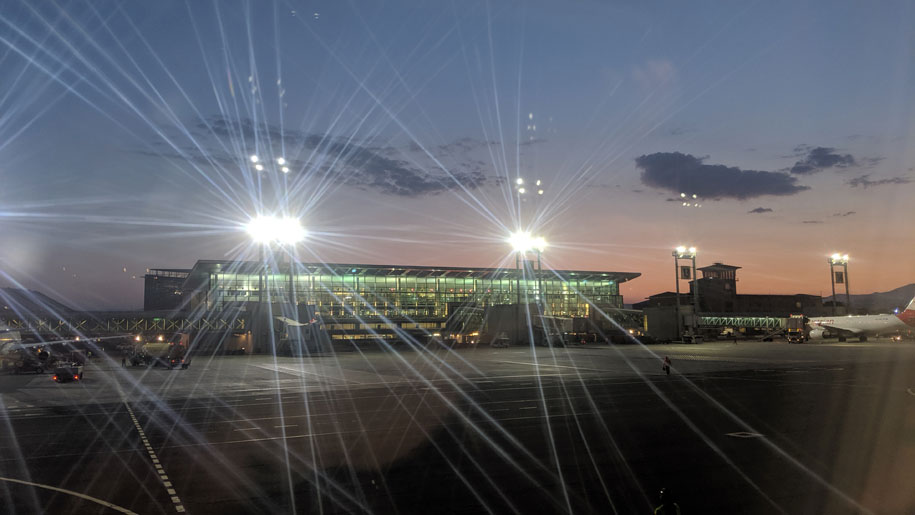 After take-off we had the breakfast menu. This was a cold starter of assorted duck, turkey, roast beef and cheese, served with fruits. The choice of main courses were omelette with vegetable ratatouille, or cottage cheese pancakes served with vanilla sauce, or millet porridge with pumpkin. Bread basket, pretzel roll, Russian rye bread.

My choice was millet porridge with pumpkin since I wasn’t very hungry and was curious to try it. It was quite tasty, though I ate only half because it was very filling. 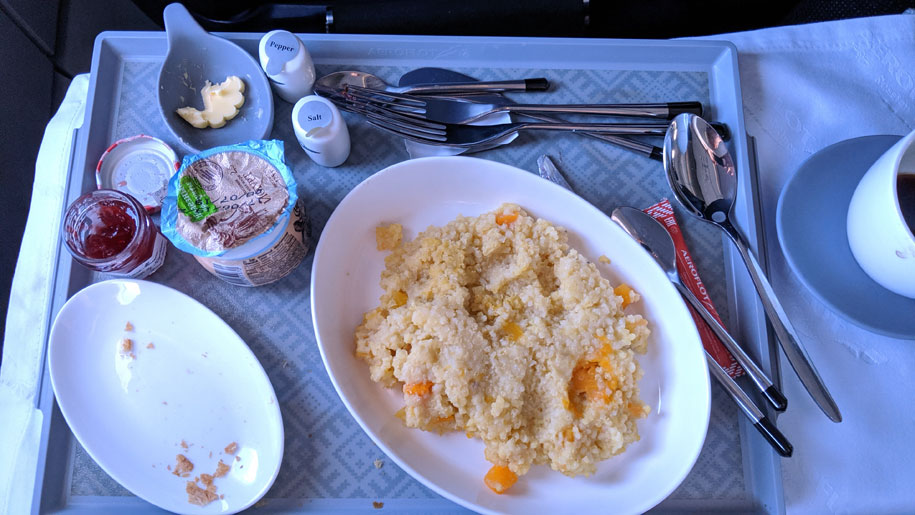 For those wanting to drink (it was a little early for me), there was the same choice as offered on the previous flights. This is listed below.

We landed at 0640 and then had a short wait for our stand, but still disembarked via an air bridge around 20 minutes early for our connecting flight.

To do this you have another passport check and a perfunctory security check (you keep devices and liquids in your hand luggage, and walk through a scanner), and then went to the St Petersburg Lounge, for which I will publish a separate review.

An on-time (in fact, early arrival) flight, with good service and a comfortable seat. The lack of power didn’t bother me this early since my devices were powered, and I could watch a film on my phone and then doze for the short flight. A great way of getting to Armenia. 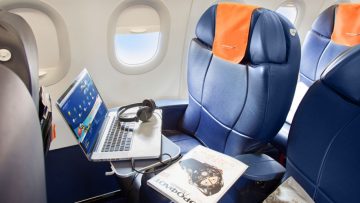