When Qatar Airways takes delivery of the first A350 XWB aircraft, scheduled for later this year, it will be around a decade since Airbus first announced development of the twin-engined long-haul aircraft.

Plans for the A350 were originally based on the fuselage of the existing A330, but following a redesign it was renamed the A350 XWB (extra wide body).

Its cabin measures five inches wider than the Boeing B787 Dreamliner, one of the aircraft (along with the B777) with which the A350 will compete. Airbus says that the A350 XWB will offer a 25 per cent step change in fuel efficiency compared to the B777, and will burn 9 per cent less fuel for every seat offered than the Boeing Dreamliner.

As at the end of March, Airbus has so far received 812 firm orders for the A350 across 39 airlines, with launch customer Qatar Airways having ordered the most aircraft at 80, followed by Singapore Airlines with 70, and Etihad Airways with 62. Emirates ordered 70 of the aircraft in 2007, but this order was cancelled in June (see news, June 11).

The first test A350 XWB aircraft took to the skies last summer (see news, June 2013), and the aircraft made its full international debut at the Singapore Airshow in February. A special test aircraft bearing the Qatar Airways livery flew above Toulouse in March (see news, March 2), and the carrier plans to take the A350 XWB, along with an A380 and revamped A320, to the Farnborough Airshow in July (see news, February 17).

None of the carriers have yet publicly confirmed seating configuration for their A350 aircraft, and although Airbus’ preferred layout is nine across in economy with a seat width of 18 inches (see news, April 7), one airline has already ordered the ten-abreast”high efficiency” configuration. The recently merged LATAM Airlines Group this month unveiled the unified cabin design for its B787 and A350 aircraft (see above image), the latter of which it is schedule to start taking delivery of next year (see news, April 4). Note we don’t yet have a seatplan released by LATAM.

To date the only UK carrier to have placed a firm order for the A350-XWB is British Airways, through its parent company IAG (see news, April 2013). 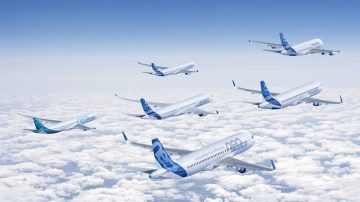