Eurowings to open new Berlin base

Eurowings will open a new base at Berlin Brandenburg on April 1.

The budget member of Lufthansa Group will base three A320s at Berlin which will operate several domestic and a number of international flights.

Domestic routes will operate to Cologne, Dusseldorf and Stuttgart up to three times a day.

In the summer services to many leisure destinations across Europe are scheduled. Others could be added. Much will depend on when international travel restrictions are lifted.

By opening a Berlin base Eurowings is reacting to the development which has seen “international competitors who have largely left the German market in the wake of the [Covid-19] crisis,” says CEO Jens Bischoff.

The carrier already serves Berlin and says that last month it operated one third of the flight total at the capital’s airport.

Readers may care to note the situation in Germany as it relates to Lufthansa mainline.

The carrier only operates long-haul and international services from Frankfurt and Munich. It relies on Eurowings to operate international flights from other German cities.

Lufthansa mainline does operate from Berlin but its flights from the capital go to Frankfurt and Munich which of course are important feeders for its hubs.

One major destination not served from Berlin by Eurowings is London.

Lufthansa mainline had served the UK’s capital city from Berlin since German re-unification but latterly it transferred London to Eurowings.

But the carrier decided to end the route many months before Covid-19 and it’s a moot point whether it will return anytime soon.

This week Eurowings also announced new UK routes to the Mediterranean island of Mallorca. From the end of May the airline will operate flights from both Birmingham and Manchester to Palma de Mallorca airport.

Eurowings launches flights from Birmingham and Manchester to Mallorca 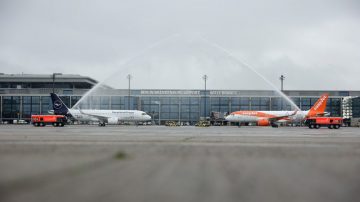