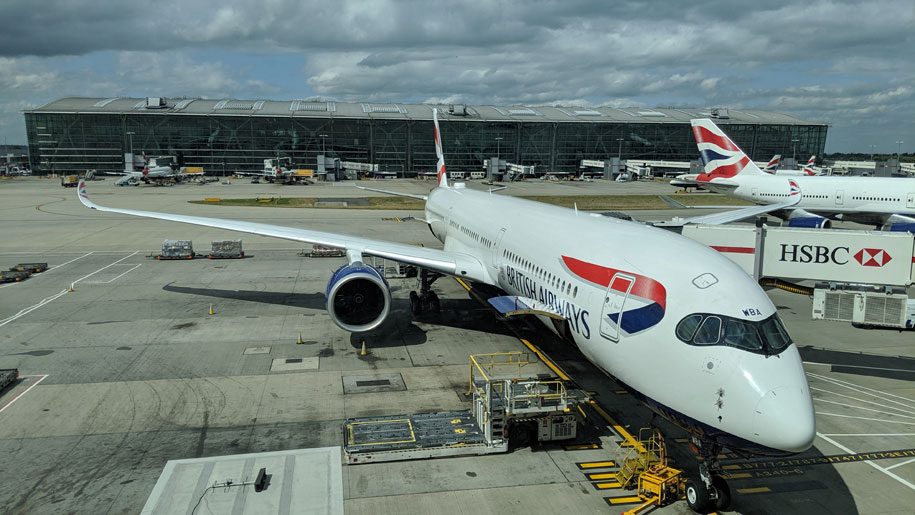 As reported previously, British Airways is running a number of short haul flights for its new A350 aircraft prior to it being used for its first long haul routes. This is a review of the inaugural flight from Heathrow to Madrid.

The flight was from the B Gates at Heathrow Terminal 5, and there was a reception in the lounge hosted by British Airways CEO Alex Cruz, who discussed the A350 and new business class. I videoed this and you can watch it below.

The aircraft is configured for 331 passengers in three classes, with 219 economy class seats, 56 premium economy and 56 business class seats. BA has a seat plan which can be viewed here.

The benefits or otherwise of the A350 over ‘older’ aircraft have been discussed in previous reviews. The A350 has been around since 2014, with Qatar Airways being the launch customer of the A350-900.

The A350-1000 is a larger aircraft – some 74 metres top to tail – but once on board you’d be hard-pressed to distinguish it from an A350-900 unless you looked down the length of the aircraft. Many readers will have encountered the A350 on Qatar Airways, which has both the A350-900 and A350-1000 as well as Cathay Pacific and Malaysia Airlines, to name just three other airlines – also members of Oneworld.

Most of the business class seats on the inaugural flight were reserved for guests of BA – mostly journalists and bloggers. 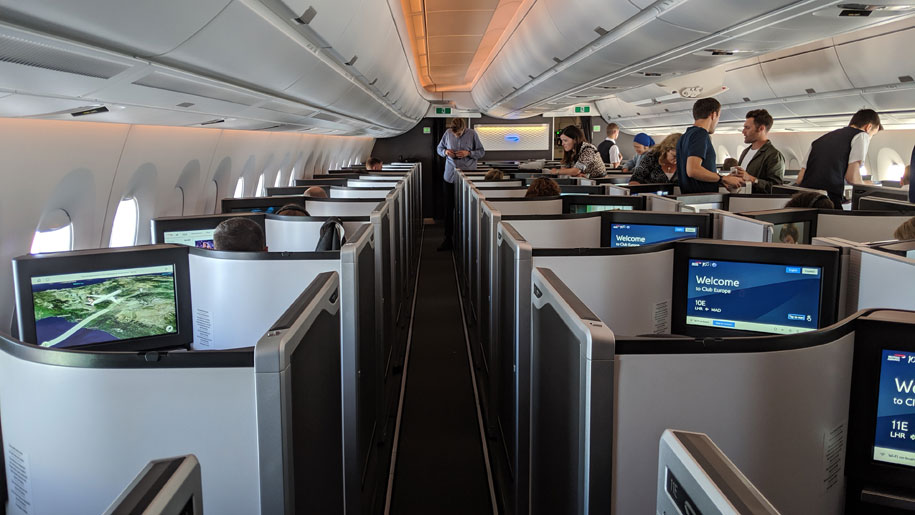 I have also written separate pieces about economy and premium economy (see links below) as we had the chance to look round those cabins, but since the only wholly new seat on board is the business class seat I will concentrate on that here.

Since this was a short flight, we did not experience the Club World catering and instead had a sort of hybrid of Club Europe and Club World catering. In addition what was listed on the menu had changed by the time we had got on board, but then it was touch and go whether the flight would take place at all with strike action threatened and scheduled by Heathrow staff until late the previous evening. I am not reviewing the service, which was excellent, or the drink, because I didn’t have any, or the food, because I barely had time to taste it. 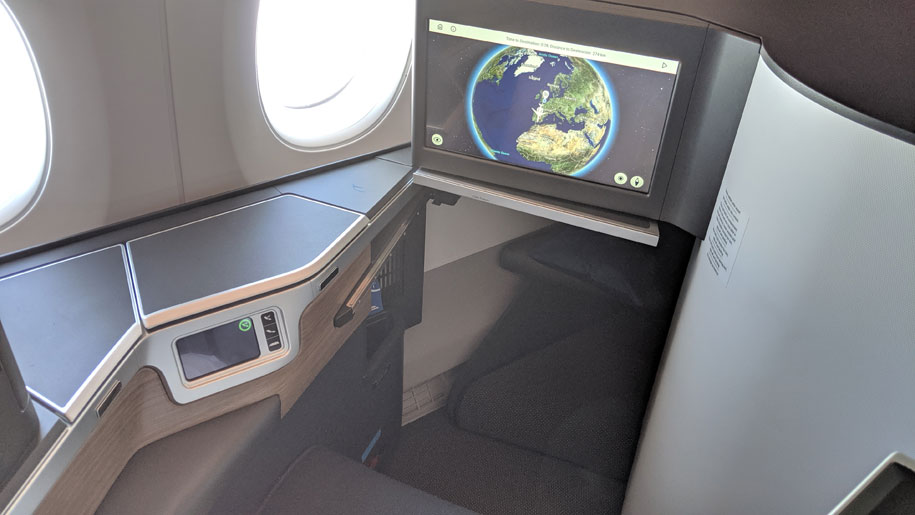 If you are travelling with someone and want to talk with them, then you will need to choose the centre seats, because it is difficult to hold a conversation across the aisle, not just because of the angle of the seats but also because of the new privacy door, which even when open cuts off you view of the other seat. I’m sure this is how it has been designed, and it means privacy is good even when the door is open. 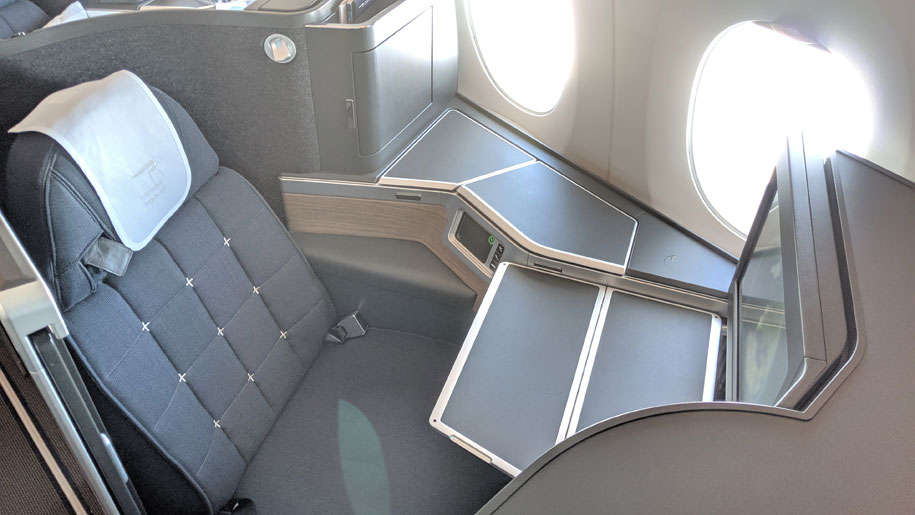 The seat has an attractive design, with a colour scheme not unlike the current First class.

What will be new to some passengers is the safety feature of having both a normal waist belt but for take-off and landing an additional shoulder belt as well. It is easy to operate and was demonstrated by the flight attendants on this short flight.

There were some unique touches on this flight, such as a certificate to say we had flown on the A350 inaugural and these head covers. 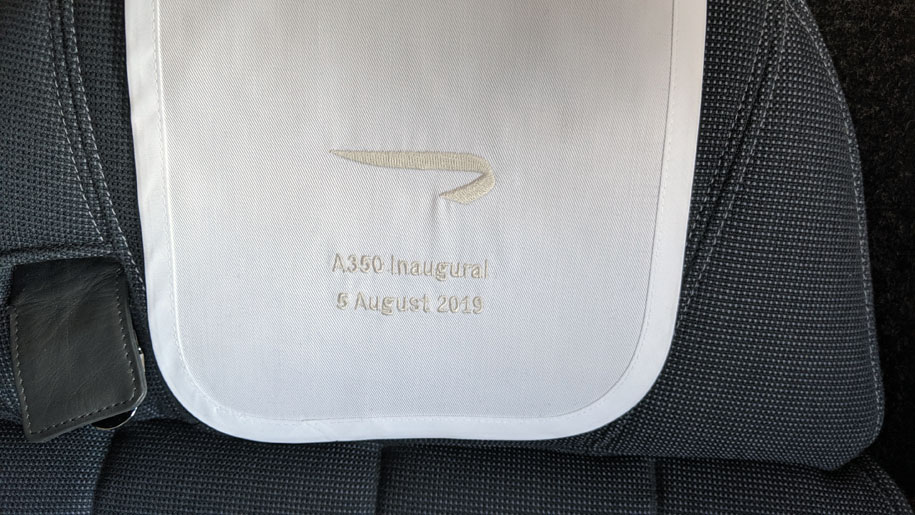 There were also these amenity bags. 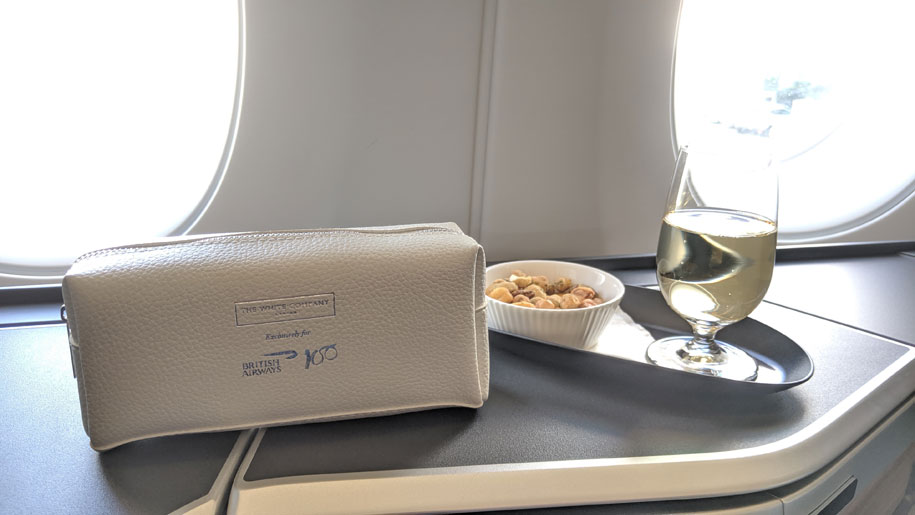 But back to the seat. There are plenty of places to store items, and these are available both for take-off and landing. Starting at shoulder height there is a compartment which opens to reveal a vanity mirror – this would be a good place to store the provided noise-cancelling headphones.

There is then a side table area which has a further two storage compartments, each with lids. The first is quite small, but would hold a phone and some other items. The second is larger and is where the handheld control for the Inflight Entertainment is stored, and also the power. There is one socket which is international, taking EU, US and UK plugs, as well as having a USB slot above it. 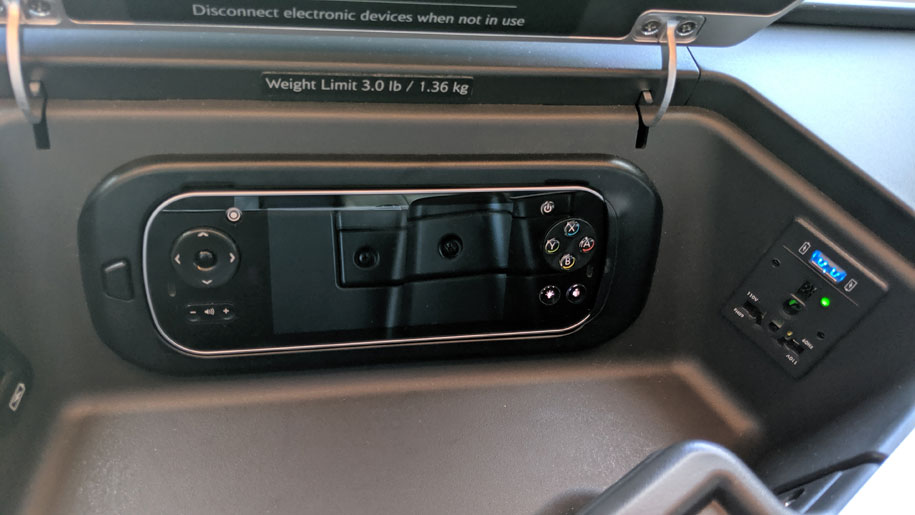 There is then another area just below knee height which is ideal for water bottles – and also in a good position for accessing them when the seat is reclined. Finally, you can store items under the ottoman seat, so I put my backpack under there. You can store a small bag there for take-off and landing, I am told, though I can imagine larger items would not be allowed. Finally there is a space for magazines. 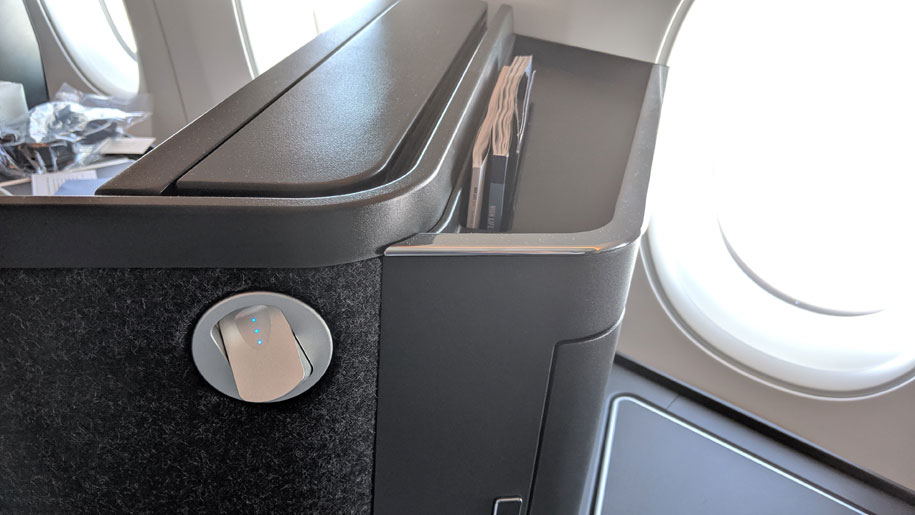 Controlling the position of the seat is easy, with a choice of three pre-sets (take off/ landing, reclined and bed) and then a touch screen that allows more minor adjustments. The armrest can go up and down on one side, depending on personal preference.

The doors to the suites are all secured open for take-off, and then cabin crew come round to release them so you have the option of shutting them. The doors shut almost completely – you can fit a finger in the gap but not much else, and I was told the gap is to stop them rattling, which makes sense.

The walls and door of the seat are such that even when sitting upright, I would have struggled to make eye contract with anyone even while turning my head and attempting it, yet they are not so high as to make you feel closed in. In fact, for people in the centre seat, the overhead cabins are so deep that if you are not tall you may end up having to stand on the arm rest to get your bags from these overhead bins.

The IFE screen is a good size, and works both by touching it or using the handheld. It is close enough that you can operate the touchscreen without leaning forward too much, but I found the screen to be not very responsive and had to press quite hard to get it to move around the menu, so I used the handheld. There is wifi on board, but for our flight this was offered on a complimentary basis, which meant everyone tried to use it and I couldn’t get on it at all.

The table is recessed beneath the IFE and BA is proud of the fact that it goes under the screen completely, giving you more space when you are not using it and meaning your knees don’t hit the edge of it when you are reclined and eating. You can see it in a recessed version below. 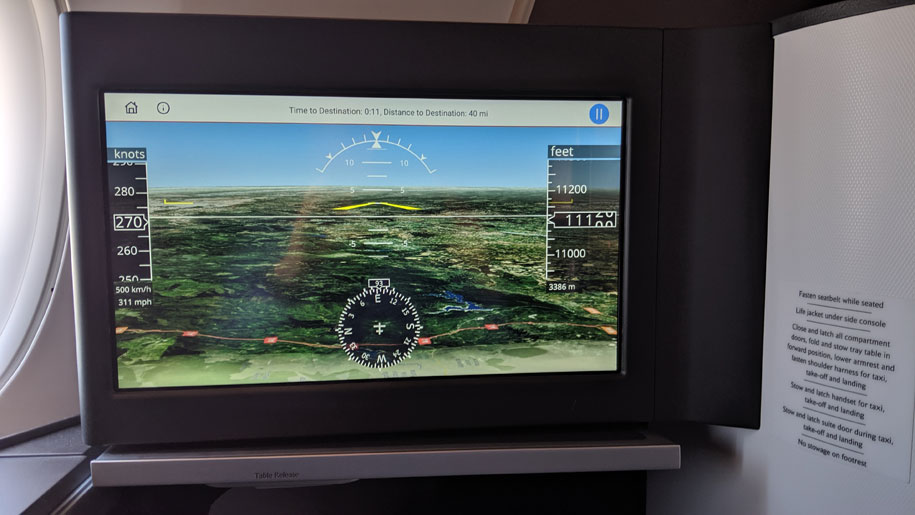 I found the table awkward to use, however. It has a catch to release it and then it comes out halfway, but if you try and unfold it at that point it catches its edge on the bottom of the screen. You have to slide it full out, then unfold it, and then push it back to this position. In addition, once it has been unfolded and food has been put on it, you can’t adjust it without taking your tray off it, folding it partly and then activating the catch again to adjust it. I expect a minority of passengers will end up wearing their inflight meals while getting accustomed to this, but perhaps I am just clumsy.

In the rear cabin the flight attendants had set up a seat complete with White Company bedding. 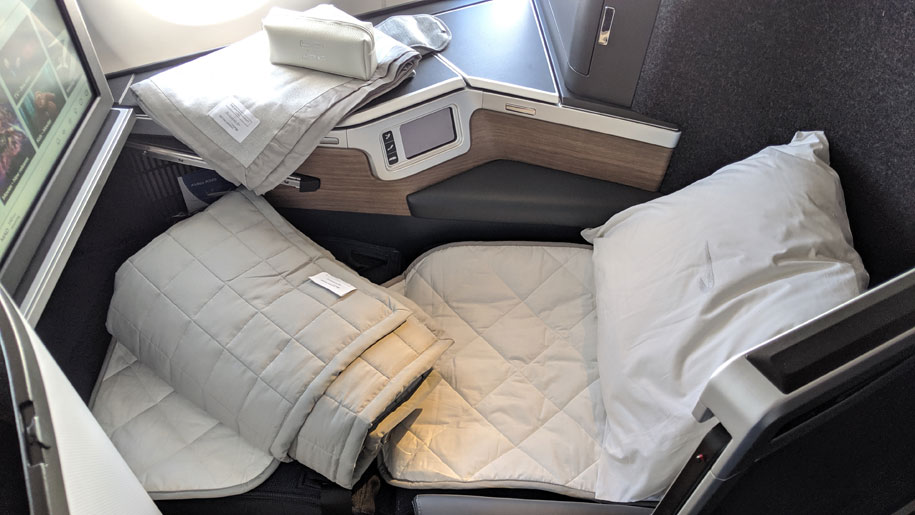 So, other than some awkward table movements, what’s not to like? Well, although much of the long-haul fleet will eventually have the new seats, it isn’t going to happen anytime soon. New deliveries of these A350s will have the new seats, and the B777 fleet will be gradually retrofitted, but it will take a long time, and for flyers on routes such as New York who are currently flying on the B747-400… well, it isn’t going to happen until those aircraft are retired, and that might be as late as 2024. Still, that’s a problem all airlines with large fleets face – just look at United and its glacial roll out of its new Polaris seat.

This was a short flight for trying the seat, but first impressions are positive. It’s clearly a step change up from the existing one. Privacy, storage space, better entertainment and wifi all help. I didn’t try and sleep in the seat, and there’s a question mark around the arm rests and how much they go down (on one side) which is the sort of detail that a longer flight will tease out.  So let’s see what it’s like long haul, with all the service elements in place, but right now, this seat – and aircraft – is to be looked forward to.