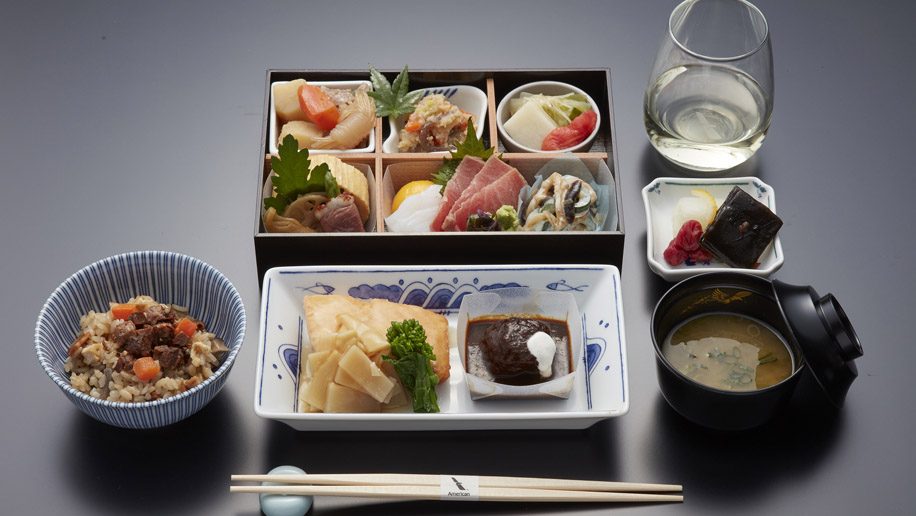 New locally inspired menus are set to roll out on select American Airlines flights to the US from Tokyo, Sydney and Auckland.

Passengers in Flagship Business on all flights to Dallas/Fort Worth, Chicago and Los Angeles from Tokyo (Narita and Haneda) will be served a Japanese menu developed by Tokyo-based chef, Jun Kurogi. Kurogi is behind the menu of his restaurant Kurogi Shiba Daimon Tokyo and has also supervised menus served on board Japan Airlines flights.

The new menus is as follows:

Meanwhile, English-born Australian celebrity chef Sean Connolly has designed a new menu for premium cabins on flights from Auckland and Sydney to the US. Connolly currently has six restaurants located in Australia, New Zealand and Dubai.

The menus comprise a small plate, a salad, four main dishes and a dessert. A preliminary menu shared with Business Traveller for business class on the airline’s Sydney-Los Angeles route is as follows:

American Airlines also plans to roll out new menus in the premium cabins on board its flights from China to the US this summer. Though details have so far not been announced, chef Maneet Chauhan, who designs the premium cabin menus on the airline’s flights from the US to Europe as well as between the US and South America, will be behind the new menus.

Take a look at these six airlines that have recently begun offering new in-flight menus on board their Asia-Pacific routes.

News
Qantas may axe Dallas route if joint business with American is not approved
27 Feb 2018
Loading...