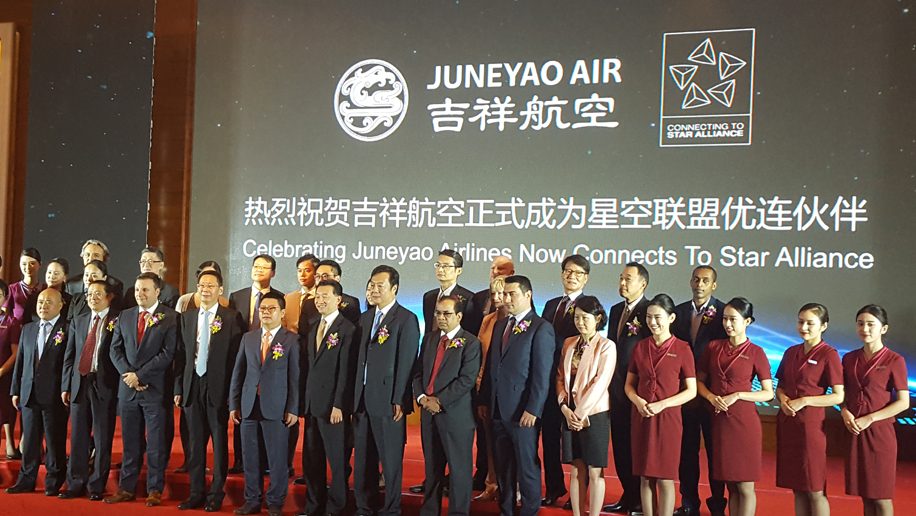 The Connecting Partner programme was developed back in 2015 to target regional and local carriers, as well as those with different business models. Essentially, it enables Star Alliance to plug some of the holes in its network using smaller carriers like Juneyao, without requiring them to come on board as full members – the commitments of which may require excessive investment for some airlines to meet.

Firstly, it enables Star Alliance members to get a boarding pass across both their flights, whether connecting onto a Juneyao Airlines flight or from one to another Star Alliance carrier. Where government regulations permit, it will also enable baggage to be checked in all the way through without the need to reclaim and re-check it in while transiting.

That said, these features and facilities are not universally available. For instance, not all of Juneyao’s flights from Shanghai have priority boarding, even for premium passengers.

Most notably however, the connecting partnership means Star Alliance members can now get greater access to, from and through Shanghai – a major blind spot for the alliance following the loss of Shanghai Airlines in 2010 (when it was acquired by Skyteam member China Eastern Airlines). For instance, Star Alliance now has a non-stop service between Shanghai (Pudong) and Hong Kong with Juneyao.

A review of Juneyao Airlines’ business class on its Shanghai-Hong Kong service is available here.

“Juneyao Airlines brings with it some 80 unique city pairs to the Star Alliance network, and on average some 270 additional flights every day,” said Star Alliance CEO, Jeffrey Goh.

“For statistical purposes, this means that out of Shanghai, Star Alliance will have almost 500 flights per day to some 100 destinations out of Shanghai Hongqiao and Shanghai Pudong. This is a great opportunity for us to establish – or re-establish – our presence in Shanghai.

“When Shanghai Airlines left Star Alliance, we and Air China had the aspirations that Air China could perhaps step in and support more connectivity in Shanghai. But Pudong and Hongqiao airports are starved of slots, and that has been a haemorrhage on Air China’s spending in Shanghai. It’s not achieved the aspirations that were hoped for. As Juneyao became more prominent, it became an interesting proposition for us and the fact they happen to fly Shanghai to Hong Kong is a benefit for us, as well as the other multiple destinations in China. It’s allowed us to plug the gap that we thought we could solve within the alliance when Shanghai Airlines left.”

What Connecting Partners will not necessarily offer, however, is mileageearn and burn privileges across the Star Alliance network – although individual agreements can be struck. In Juneyao’s case, mutual FFP benefits have been agreed with five of the alliance’s carriers – Air Canada, Air China, Eva Air, Singapore Airlines and United Airlines. Expansion to other airlines’ FFPs is up to individual carriers.

As such, each Connecting Partner agreement will function differently and specific benefits and FFP agreements will vary.

“Many airlines have approached us for potential partnerships, but we are very careful and selective as to who we add to the Connecting Partnership family,” said Goh. “We have a number of airlines we’re talking with and we’ll be making announcements soon.”

Meanwhile for Connecting Partners themselves, the initiative may pave the way for them for full membership to Star Alliance.

“We believe becoming a Connecting Partner is a preliminary step and in the future as our company continues to grow, I won’t rule out the possibility of officially joining Star Alliance,” said Juneyao Airlines chairman, Wang Junjin.

“But now we are a Connecting Partner, I think that is very good experience for us. We will try to see if we can fit in [to Star Alliance], and we believe this is a good model. In the future, if it’s necessary and beneficial to the network building of Star Alliance as well as our international strategy, I think it would be correct to officially join Star Alliance.”

Juneyao Airlines is further aiming to expand its international network with the introduction next year of its first new B787-9 Dreamliner. While applications for specific routes for the aircraft have not yet been made, Juneyao currently has its eyes on Europe, the US and Australia.

News
Juneyao Airlines: What you need to know
1 Feb 2017