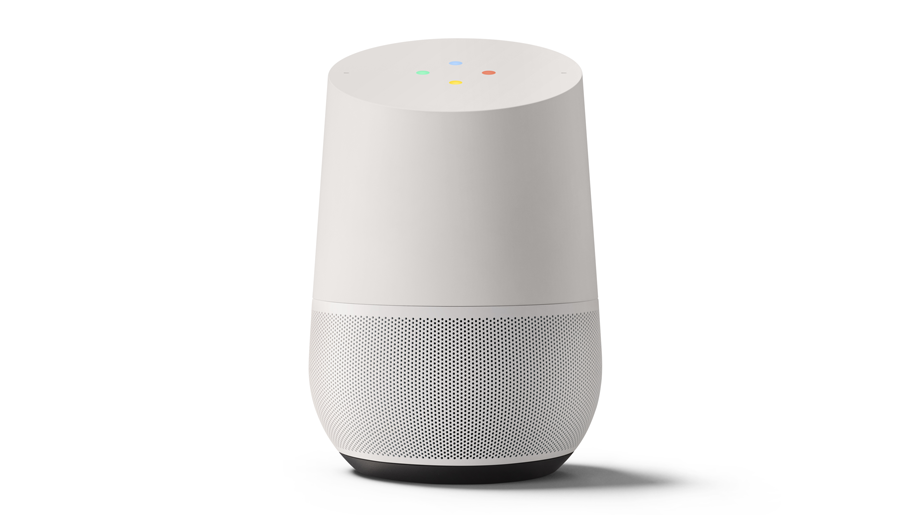 This neat little device is best explained by its competitors which were earlier to market – Apple’s Siri and Amazon’s Echo. The Google Home has an attractive design – less forbidding than the Echo, and, depending on which room you place it in, quickly blends into the background. In fact, in our kitchen it looked like just another appliance, though there are a total of six different colours you can customise the base with (for extra charge): copper (metal); snow (metal), carbon (metal), violet (fabric), marine (fabric), mango (fabric).

Setting it up is very easy. You plug it in, download the Google Home app to your mobile phone, log in to your Google account and then start talking to the device. I was also using two Google wifi devices, of which there will be a separate review, but they are not necessary for using Google Home. You simply add it to your home network, and any other devices which are already on there can be connected. I have Google Chromecast devices plugged into the back of the two smart televisions we have at home, and so I could stream the Google Home content through either of those, as well as adding any connected speakers.

At first you’ll likely ask it questions, ranging from general knowledge (“Capital of Peru?”) to recipes (well, it was in the kitchen). I connected up my Spotify account, and could ask for it to play something from a playlist (or any song on Spotify). You can choose preferred news sources (weirdly, Fox News came pre-ticked, which certainly isn’t in my preferences, honestly).

The device is always ready and you simply say either “OK Google” or “Hey, Google” and it springs to life. In the morning, if asked it would summarise my day from my Google calendar, with diary appointments, tell me the weather forecast both at home and at work (40 miles apart, so relevant) and then run through those news headlines, which might take many hours depending on how many had been chosen in the settings function.

Since the device is likely to be used by other members of the family, I asked my them what they thought of it. My 13-year old son thought it was fun, but after an initial 30 minutes never did much with it other than ask specific questions relating to his homework, and lots of silly tests such as asking it to translate phrases into strange languages. I never found out how many languages it did speak, although Mongolian wasn’t one of them, or Turkish.

What it can do is understand English – even UK English. Since its US launch the team in the UK has worked to help the device understand regional accents (apparently), and it didn’t have any problem understanding us, even if we put on silly voices.

So is it better than other devices? Hard to say. People used to Siri on their iPhones seem to prefer Siri, but then they have grown accustomed to that. For its part Google says that it “has a unique blend of expertise in language understanding (and translation!), machine learning, voice recognition and understanding a person’s context such as their location or diary, if they want. With 18 years of development in search, Google Home can give answers that are more tailored and relevant to you.

Many will worry about the device listening in on you, and of course it has to do this to be ready for when you say “OK Google”. There is a mute button on the back, or you could just turn off its power. Personally I wished I didn’t have to say “OK Google” to it every time I wanted to turn it on. It got repetitive very quickly, and actually discouraged me from using the device. It was like talking to a hard-of-hearing relative who you have shout their name every time you want to get their attention.

The Google Home has been fun to play with, and I can see a future where it might become a part of our lives. At the moment, though, it’s just another device in the kitchen – more used than the bread maker, less than the juicer.

Google Home is £129 from the Google Store and is also available from Argos, Dixons, John Lewis and Maplin and coming soon to EE. Coloured bases will be available for £18 for fabric and £36 for metal helping you customise to fit your home.

Google Wifi will also be available online on April 6th for £129 in a 1-pack and £229 in a 2-pack from the Google Store. It will also available from Dixons, Maplin and John Lewis and coming soon to Argos and Amazon.