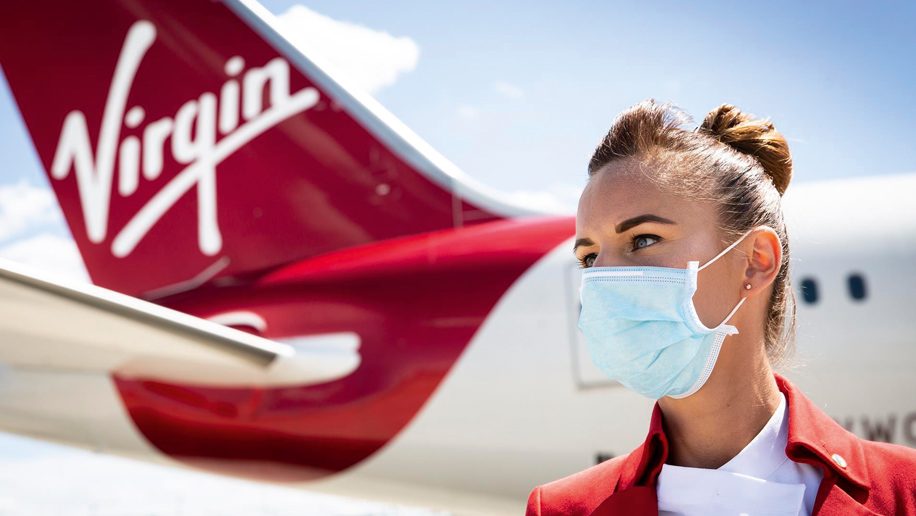 This was the first flight after the lifting of restrictions on UK citizens (and EO citizens) travelling to the US. To celebrate both Virgin and British Airways collaborated on a dual take-off on the morning of November 8, 2021, with A350 aircraft taking off simultaneously from the two adjacent runways at London Heathrow at 0850. 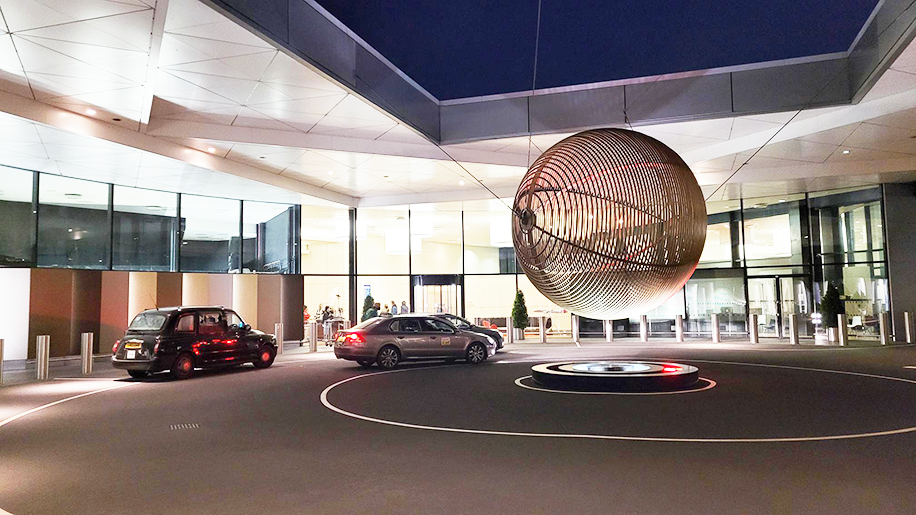 I took a taxi to the airport and arrived at about 0615 for the 0830 planned departure of VS3 to New York, with a flight time of around six and a half hours. The taxi was allowed to drop me off at the drive through check-in, which saved the new £5 drop-off fee on the forecourt of Heathrow. Once at check-in my documents were quickly checked and there was no queue at the dedicated fast track security. 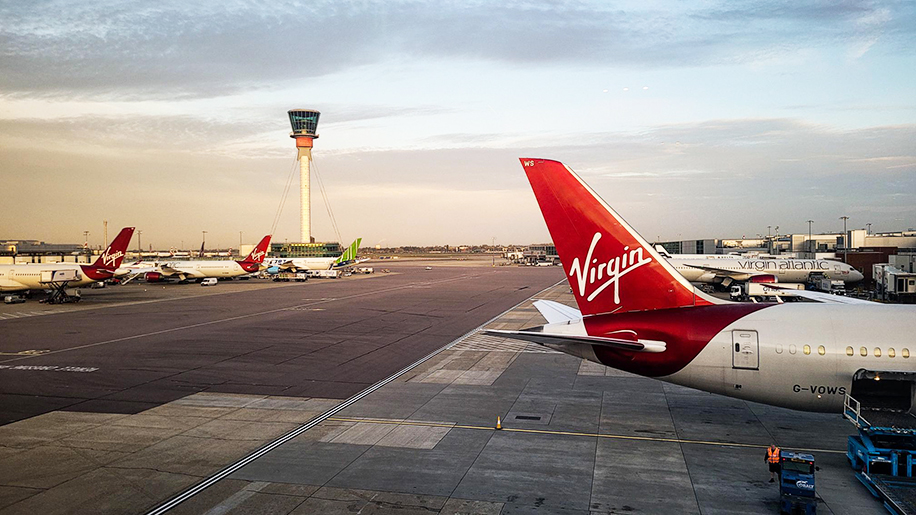 Virgin has altered the layout of its Club House lounge at T3, with the removal of the spa and the addition of some Peloton cycling machines. This lounge is the only one still run by Virgin, with the rest now run by Plaza Premium.

Boarding took place at 0745 from gate 5, and there were TV crews filming both for news and documentaries, along with lots of American flag waving. 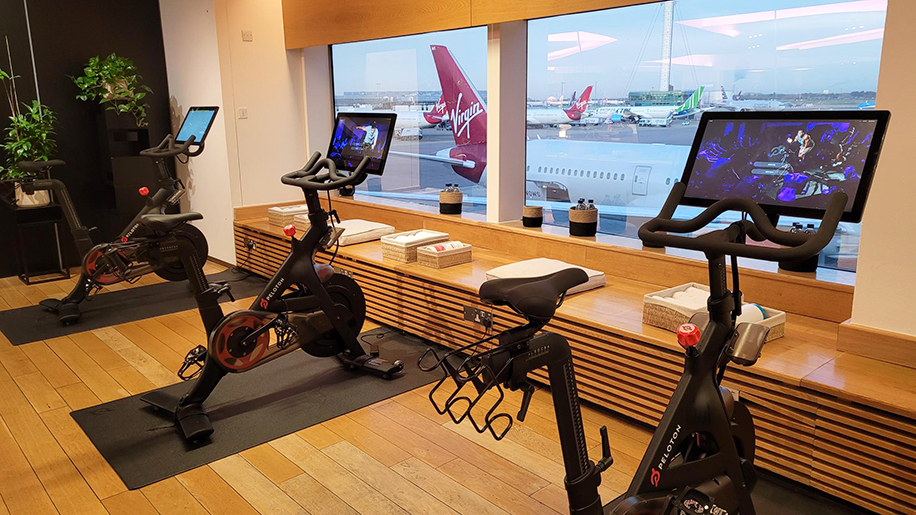 This A350-1000 has Virgin’s new Upper Class Suite fitted. This aircraft has a total of 335 seats configured in three classes: 235 in economy, 56 in premium economy and 44 in business class (or Upper Class as Virgin calls it) in a 1-2-1 configuration of 11 rows (numbered 1-11) in an A-DG-K format. I was in Seat 3G.  All seats face the window, both window seats and centre seats, meaning for the centre seats when you want to chat to your neighbour you have to twist around and it’s not comfortable for very long.

We have reviewed this new seat before, on a trip to New York just over two years ago. To see a video of that previous trip for the inaugural of this new Upper Class Seat, see the below video…

Since we have written about the celebrations elsewhere:

this is a review updating some thoughts I had about the seat (suite) having now flown it a third and fourth time (because of the return trip back from New York the following day).

As background, the Upper Class Suite seat is a be-spoked version of the Sirius New Generation (NG) seat, with the addition of a sliding privacy screen. This is definitely not a door, you can exit the seat and get into the aisle with it ‘shut’, but it does provide extra privacy to the seat. Having said that, if the crew don’t demonstrate this feature, in my experience, no one uses it, and certainly on our flights both to and from New York, one of which was a day flight and one of which was a night flight, I didn’t see anyone use the door.

I think there are various reasons for that. One is, they might not realise it is a feature. Secondly, it’s debatable just how much extra privacy it gives you – anyone walking past can look down onto you sleeping just as they would normally. And lastly, it does make it awkward if you wake in the night and want to get up, since it is quite difficult to get up with the door shut, and opening it again while lying down isn’t completely intuitive, or physically easy, though with practice it would become easier.

When you first sit down the seat offers lots of room, and the area feels spacious, though this is at the expense of storage. For take-off and landing, there isn’t any, really: just a very thin magazine holder where you’ll find the headphones when you first board. Once you are in flight there is a side table with two shelves above it, but that’s it, really. (For take-off and landing, there is an over the shoulder strap as well as a waist strap.)

The tray table is excellent, and I think has been redesigned from the one on the first aircraft. It can be used as a sort of extra side table once you have folded it down from the back of the seat in front, or you can then slide out the upper portion and position it right in front of you allowing you to work and eat. It also had the advantage that when the food is served you can move your laptop or work to one side and eat without having to put everything away.

The inflight entertainment system, the Zodiac Rave System from Zodiac Inflight Innovations (Zii), is very innovative, not least because there is no remote control for the system, so you either have to use the 18.5 inch touchscreen, or pair the system to your device. I got this to work, but it was quite beyond me to understand how it worked so I just used the touchscreen. There is also wifi on board courtesy of Inmarsat and T-Mobile, with is GX KA Band wifi connectivity. The price is £21.99 for the entire flight, and it was reasonably quick. If you have two devices then the code will work on either, but not on both at the same time.

In terms of entertainment, there’s a choice of over 100 movies, 300 hours of TV shows, over 350 albums and podcasts and over 45 hours of kids’ content. The quality of the HD screen is outstanding, though I didn’t use the screen for anything other than the tail cam which, frustratingly, didn’t work for take-off, and the moving map.

For power, there are two USB ports, one just above an AC plug which is at knew level in the body of the seat, and a second under the open shelves.

I’d noticed on the BA A350-1000 that the overhead lockers for the centre seats are difficult to reach, but that’s not a problem on the Virgin version because there’s a recess in the side of the seat so people can raise themselves up to access the lockers. There’s a good reason for this from the airline’s point of view since it stops people standing on the seats and dirtying them. Having said that, most people don’t notice it and so ask a neighbour to help them if they aren’t tall enough. And such times it seems churlish to point it out since it looks like you aren’t willing to help!

The best seats for leg room (or more accurately, foot room, are the bulkhead seats in row 1. There’s a possibility of being disturbed by noise from the galley there, though, and because 1D and 1G face the window, in fact they face the toilets, so I’d avoid those.

Once on board I was offered a choice of orange juice, Champagne or water. At the seat was the new recyclable washbag.

We took off at 0850 using a dual runway with BA 001 flight. The centre seats had a problem with the IFE so the tail camera didn’t work, which wasn’t great timing, but we could see the BA aircraft to our right as we took off and it was quite emotional seeing the two airlines, very briefly, working together to celebrate the opening of US routes to UK travellers after such a long period of time. 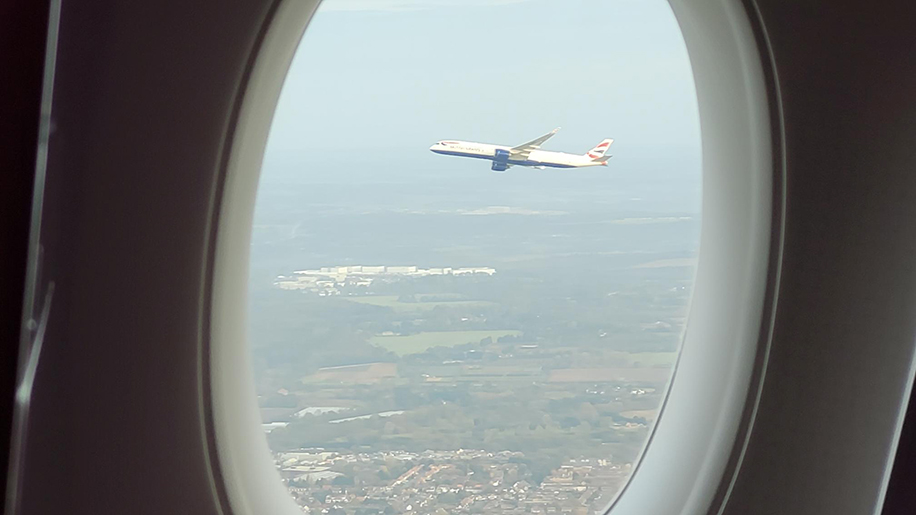 After a couple of minutes peeled away and then headed off to New York. Once the seat belt sign was off I walked to the back of the cabin to have a celebratory drink with some colleagues, and then returned to my seat to work.

There is in-seat power for UK, US and EU plugs, and this worked once we were in the air, but the USB charging did not work for my phone, and so I kept swopping the power from one device to another as necessary.

The bar on the aircraft has now been replaced with The Loft, which is really a long curved sofa facing a large TV screen. It’s a ‘nice to have’ I guess, and we made the most of it catching up with colleagues, but it isn’t the same as the bar and while I completely understand the economics of why the bar had to go (and before that, the on-board massage), it’s a reminder of the economics of air travel. In theory the Bluetooth on the aircraft allows people to sit together on this sofa and watch something on the big screen in front of them, but I can’t imagine why anyone would want to do that, even if it was live-streaming a football match, but perhaps there will be occasions.

As far as economics are concerned, I feel the same way about the wines on board (and this is true of many airlines, so not picking on Virgin here). With some exceptions, the general standard is absolutely fine, but it’s not exceptional. These are wines I would quite happily drink at home, but given that drinking in the air isn’t advisable because of dehydration, jet lag or the fact you might have meetings when you arrive, it does have to be a little bit special for me to be tempted, and wines around the £10 mark are fine if you really want a drink, but also are easy to refuse. That said, here’s the menu…

Food and drink: The menu follows:

Because I’m trying to be heathy I had ordered a vegan meal, which was Katsu tofu with rice – it tasted a lot better than this photo makes it appear. 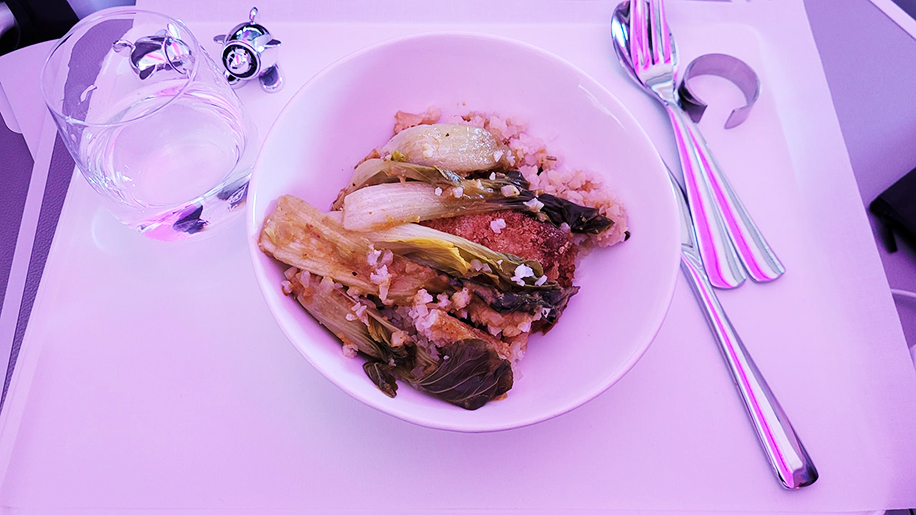 Cellar selection of the day (there wasn’t one).

After eating and working I tried to sleep for an hour or so but it was too noisy, which is fair enough since this was the first flight to New York on November 8, 2021.

I was much more successful on the return overnight flight, and it also reminded me how good the Virgin flight attendants are, something I had forgotten in the two years I’ve been away. On the day flight they were always available offering drinks and snacks, and on the night flight having had a good night’s sleep (well, almost five hours, which coming back from New York is the most you’ll ever get), they were still serving full breakfasts 30 minutes before landing. They were all smiles, jokes, and seemed to be taking real pleasure in the flight over (and back). It really adds to the experience, and is a reminder that it takes more than a great seat to make a great airline.

We arrived on time into New York and were quickly off the aircraft.

Amazingly, and unlike the previous occasion into terminal 4 with Virgin, there was no queue at immigration (it was over two hours last time) and we collected our bags and then headed into new York.

The Upper Class Suite is excellent. Judging by my seat, there are still a few teething problems (the IFE not working properly and the seat frequently jammed, and I know another seat in Upper Class stopped working altogether) but in time I suppose the engineers will sort that out. It’s good for working at, good for eating, good for relaxing and offers a comfortable night’s sleep.