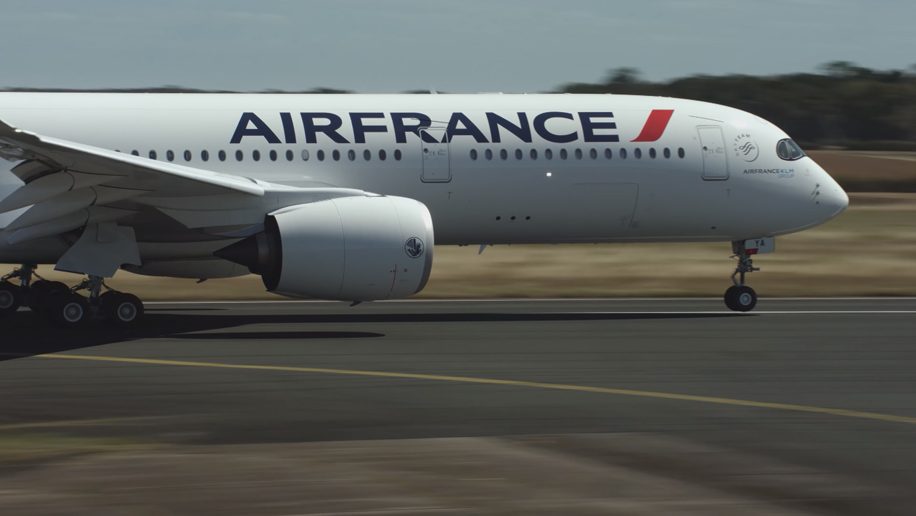 Air France received the first of its A350 aircraft in September of this year. It is set to receive a total of six of the A350-900 variant before the end of 2020 and a total of 28 by 2025. The first routes were Abidjan in Ivory Coast and Bamako in Mali, followed by Toronto from October 27 and Cairo and Seoul from December 9.

I was connecting from a flight from London Heathrow. The flight was on time, and then it was a 15-minute walk and train ride over to the L gates where a reception was held in the lounge. 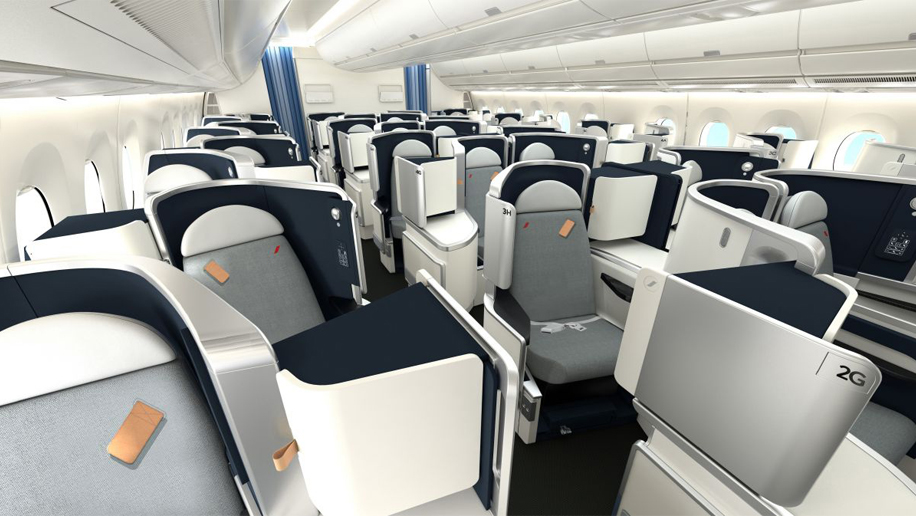 I boarded early to get some video shots of the seat and cabin before everyone came onboard.

The cabin seems spacious, perhaps since there is no rest area in the ceiling above. There are overhead lockers above both the window seats and the centre seats, and there were no problems with everyone finding places to stow bags, although I noticed that hanging the coats and jackets was difficult for the flight attendants, since the wardrobes at the rear of the cabin aren’t very large.

A nice touch is that at every seat there is a strong plastic hanger with rotating number and letters so you can put your seat row and number (in my case 3C) on the hanger and that way the crew know who to return it to at the end of the flight. 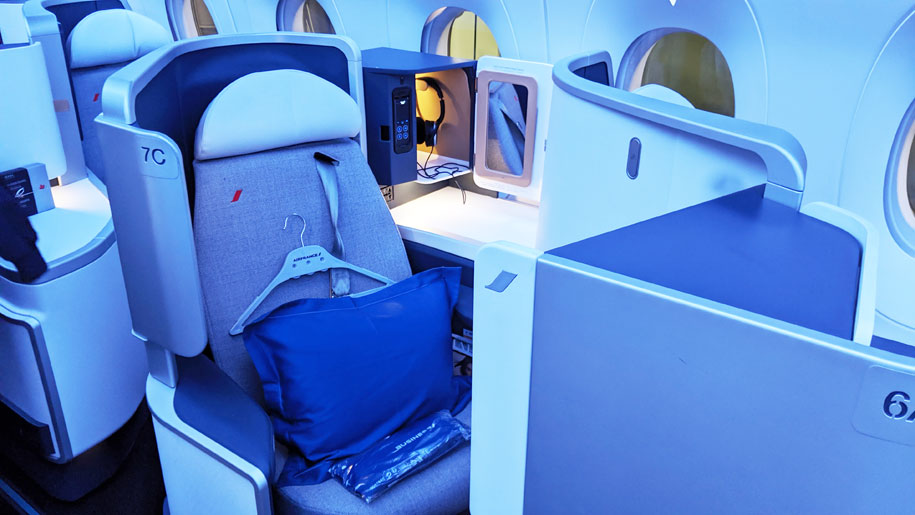 The cabin is in a very pale white colour, ironic really, since this aircraft was originally intended for the short-lived Air France subsidiary, Joon, and would have no doubt been far more colourful (here I reviewed a Joon flight from Paris to Cape Town).

It should be noted that this business class seat, although new on this aircraft, will probably be on only ten of the 28 A350s that are delivered to Air France over the next six years, and that somewhere around aircraft number 11 there will be a change to an as-yet-undecided business class. People grumble about the number of different business classes Air France has, but so long as they all recline to a fully-flat bed overnight, it’s a rather high-class grumble to have.

Having said that, Air France still has some seats which are the old lie-flat ones, including on the A380 which will be retired (along with the A340s). Air France has more than 107 long-haul aircraft currently, both Airbus and Boeing.

The rows are staggered sideways to make room for your feet under the enclosed side table of the person in front. Seats are lettered depending on whether you are in an even- or odd -numbered row. Row 1 has only two window seats (1C and J) and then they are labelled 2A, E-G, L; 3C, D-H, J and so on to the back row which is 9C, D-H, J.

The business class seat is an Optima seat from Safran (formerly Zodiac) which reclines fully-flat. The 1-2-1 layout provides aisle access for all passengers. The layout of the seats means that depending on whether you are travelling alone or with a friend or colleague, you may want to look at a seat map before choosing your seat, since they are very different.

The seat has in-seat power (although mine did not work, despite being reset), and two USB power sockets, one next to the main power and one under the 18.5-inch HD in-flight entertainment touchscreen.

If it crashes, you can reset it by pressing hard for five seconds in the bottom left-hand corner. The flight map is good, as is the choice of two camera angles for the flight – tail and front. 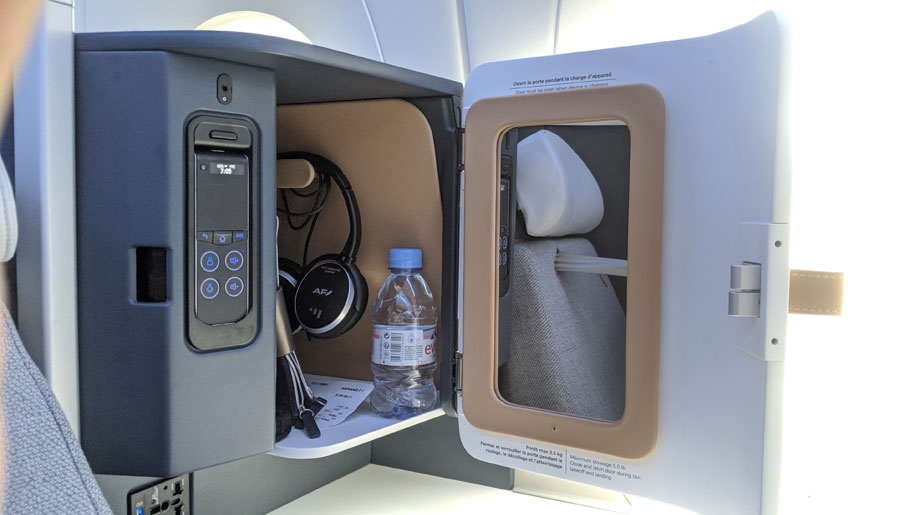 The main storage compartment has a leather handle and holds a small bottle of water and also the noise-cancelling headphones. You could store an iPad in here, but not a computer. Apart from the magazine compartment where there will be the Air France magazine and safety card, that’s it for take-off and landing, although the rest of the time there is storage under one of the arms of the seat which would be good for books or a Kindle and would also hold a water bottle. The seat also has plenty of room on the ottoman foot area, and also room underneath for your shoes.

Waiting at the seat were some socks and slippers, and these come in a bag that unfolds and which you can use for storing your own shoes. The amenity bag comes in a choice of four colours, and as well as containing all the usual items and some small Clarins items, also unfolds with a zip at either end, meaning it can be used for more than just the normal amenity items. It has a quality feel to it, though like many things on the flights, came wrapped in plastic, so Air France will be addressing this as part of its Horizon 2030 sustainability initiative. 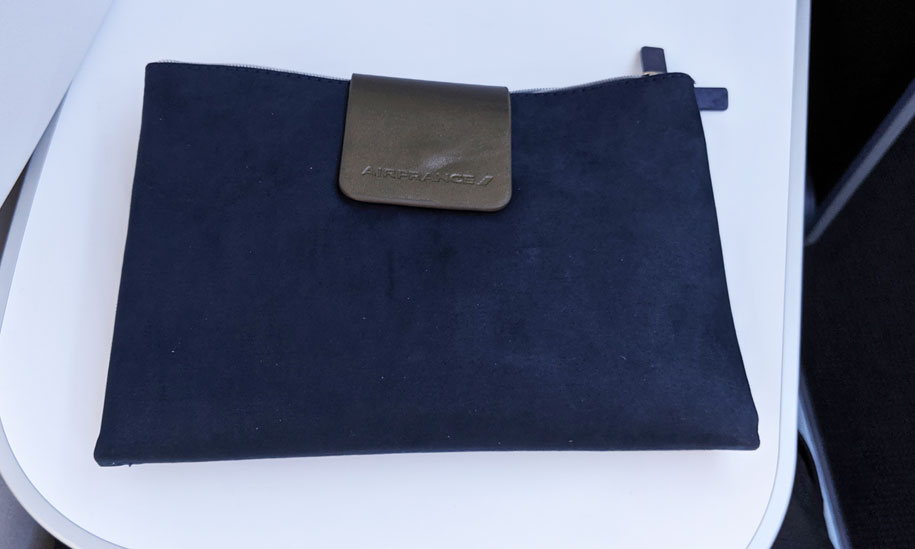 The pillow is good quality, but I suspect sleeping on the seat would be improved with a mattress topper, and it’s something that was very comfortable on the Virgin Atlantic A350 seat. 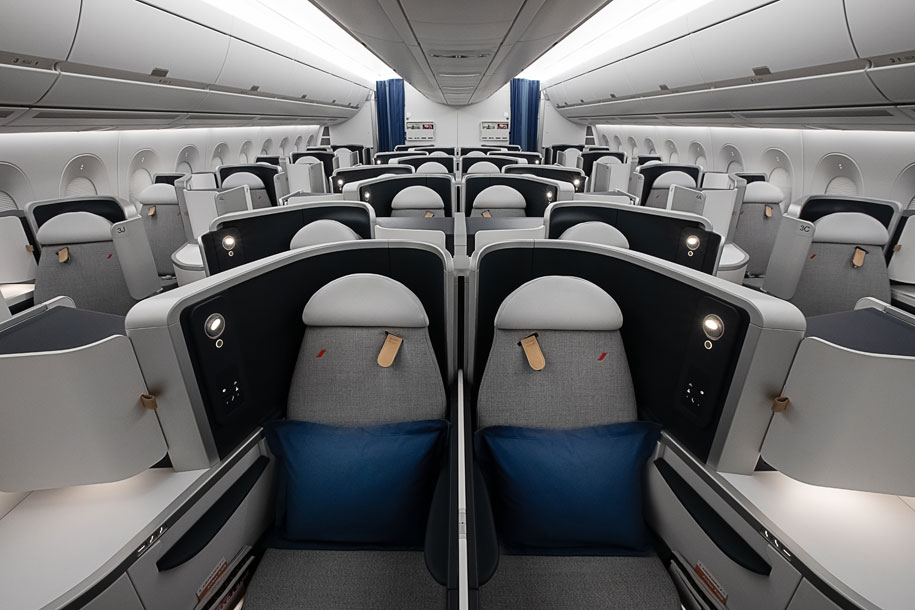 Each window seat has at least one large window next to it, and there is a control above it which allows you first to descend a kind of dimming blind and then a blackout blind behind that, although on most flights the crew will take over this function when they want people to sleep or wake up.

The seat has several options for lighting, including overhead lights (a pair which come on when you press the switch above your head) and a reading light in the wall of the seat which is good for more directed lighting (and has three settings). Below this there is a panel allowing you to indicate a Do not Disturb setting as well as calling for a flight attendant and moving your seat forward and backwards. 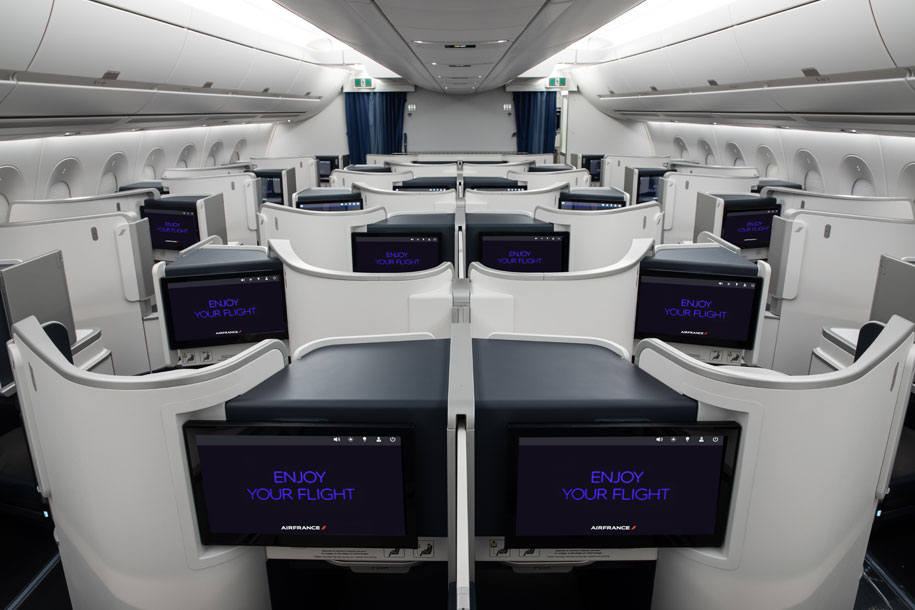 For sheer room, seats 1C and 1J are the best seats since not only do they have the most legroom but they also have a large side table. There is a possibility of being disturbed by noise from the galley and, in the case of 1J, the washroom. For couples, obviously the middle seats are the ones, but here you should choose even numbers – so 2E/2G or 4E/4G. The odd numbers would be better for solo travellers who have failed to secure a window seat.

For window seats, the best seats are in rows 2, 4, 6 and 8. These are closest to the window and therefore further from the aisle, and they also have a small sliding panel which gives more privacy, and also means your items on the side table close to the aisle do not feel quite so exposed to people walking by, although of course if someone wants to help themselves as they pass and you are asleep, there’s not much you would know about it. 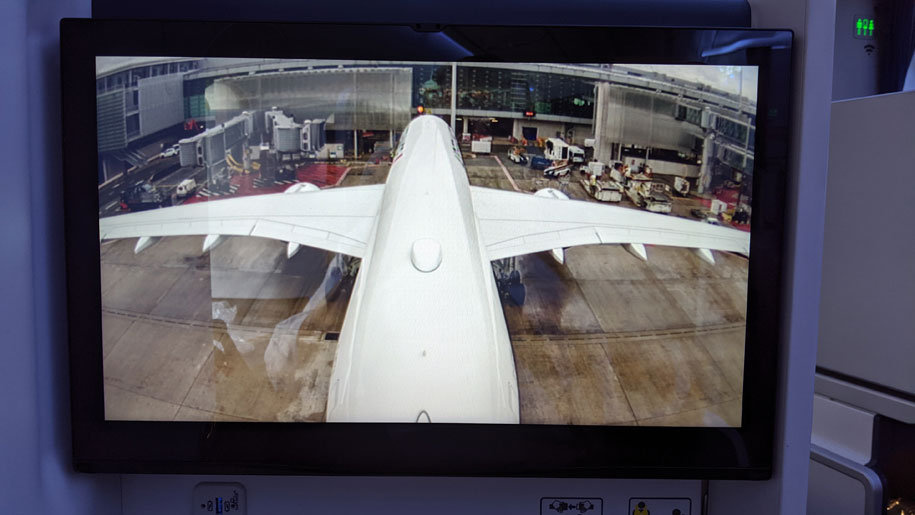 We took off on time and the flight attendants were quickly around to ask for our menu selections.

The menu was printed on quality paper, with a thicker cover, almost A4-sized, and is intended to give a ‘restaurant’-style experience to the food on offer, as is the continued partnership with the French chef Guy Martin.

The food was delicious. The full menu was an appetizer of beet mousse and a cheese crumble (this is very small and comes with your drink selection). The starters were champagne and two-pepper foie gras with blackcurrant onion confit and artichokes, or lamb’s lettuce salad and julienned beetroot. 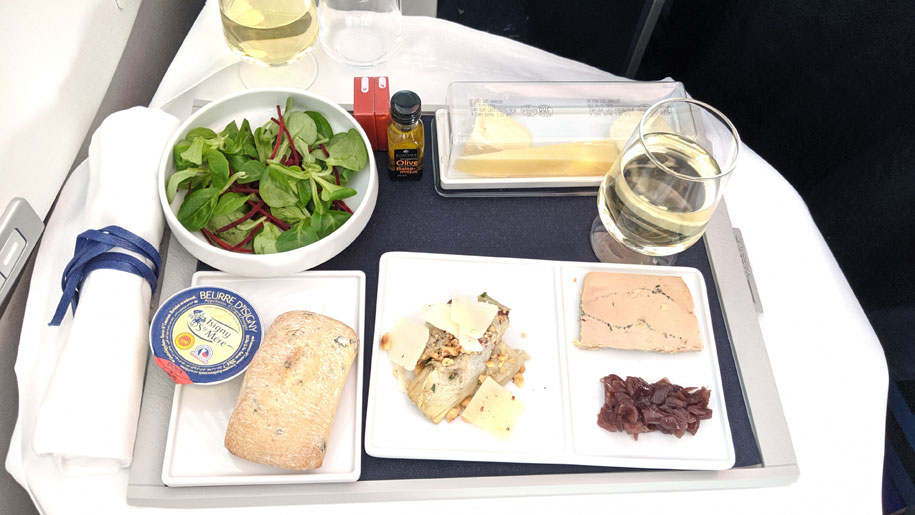 The cheese options were goat’s cheese, Cantal PDO cheese and Camembert, which were a little boring for Air France, but still tasty. Dessert choices were mango passion fruit dessert, and some very French offerings: Mango passion, Tarte Tropezienne and Opera Cake. I was worried about this because I couldn’t decide between them, but luckily all three were delivered in small portions so I could have them all.

There was also the option of fresh fruit, ice creams and sorbets.

For those for whom this would all be too much, and I suspect there may be a few of those among you, there was also the option of an “Express Lunch” which is the cold dishes from the menu.

Drink options started with a signature cocktail: “from the bar of the Lancaster Hotel in Paris: Marie Brizard rosemary liquor, white peach juice, with Martinique dark rum and champagne”. It was good for one drink, but quite strong.

Wines were as follows: 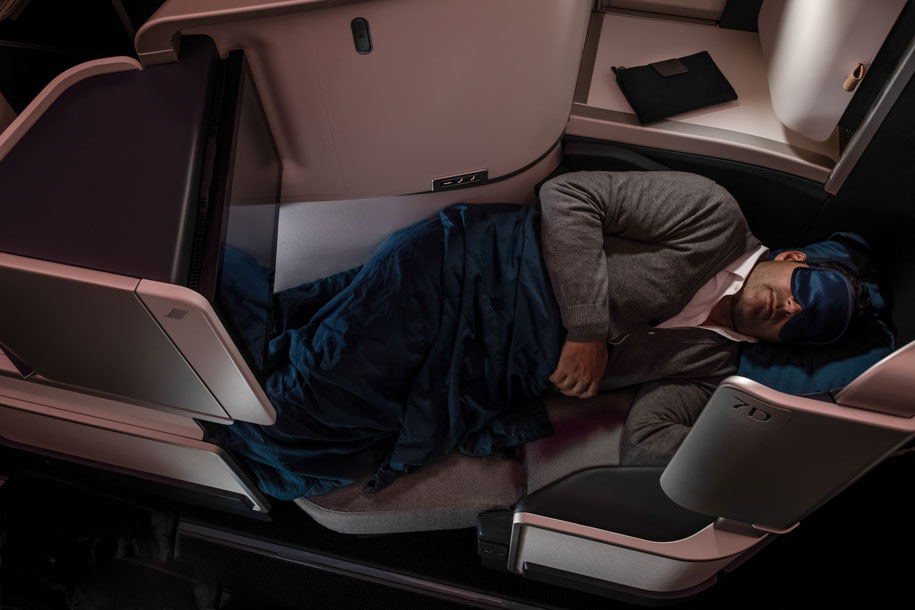 Once the meal had been served I did some work, and appreciated the table, which is firm enough to work using a laptop without the table bouncing around. There is an armrest that flips up to give more room to the seat when it is reclined into a bed (on some of the seats, not all), although on mine and on the seat across the aisle this looked to have already broken. 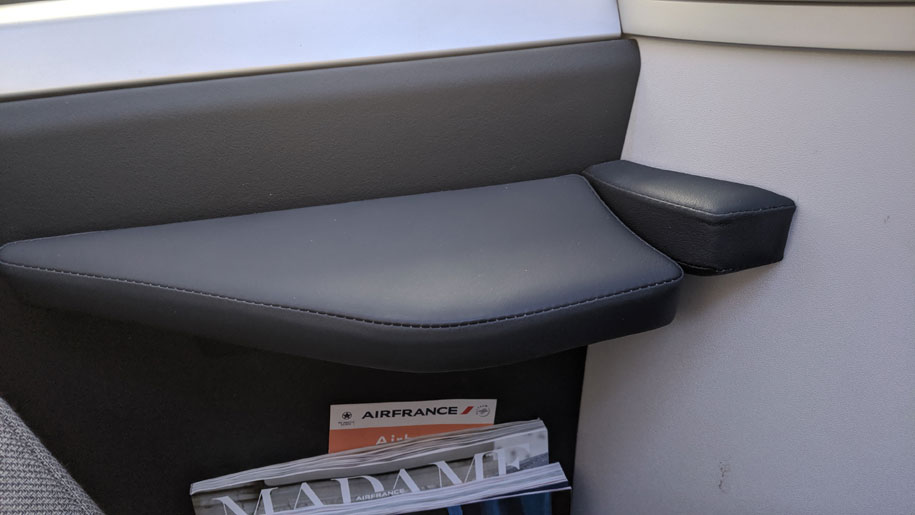 Wifi is also on offer, including (in business class, at least) free messaging through apps such as WhatsApp. 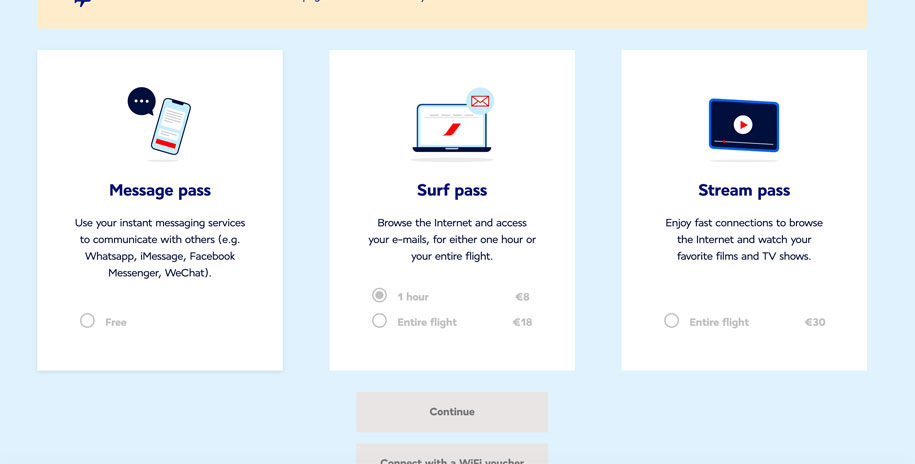 It was a day flight, so although I reclined the seat and had a doze, it wasn’t the same as a night flight. On the way back (in seat 4L on the other side of the aircraft) I managed to get several hours sleep, although again, it should be a priority that a mattress topper is introduced as quickly as possible, since the seat cushion has a significant gap between it and the back cushion when the seat is fully reclined. That said, I slept well on the return journey. 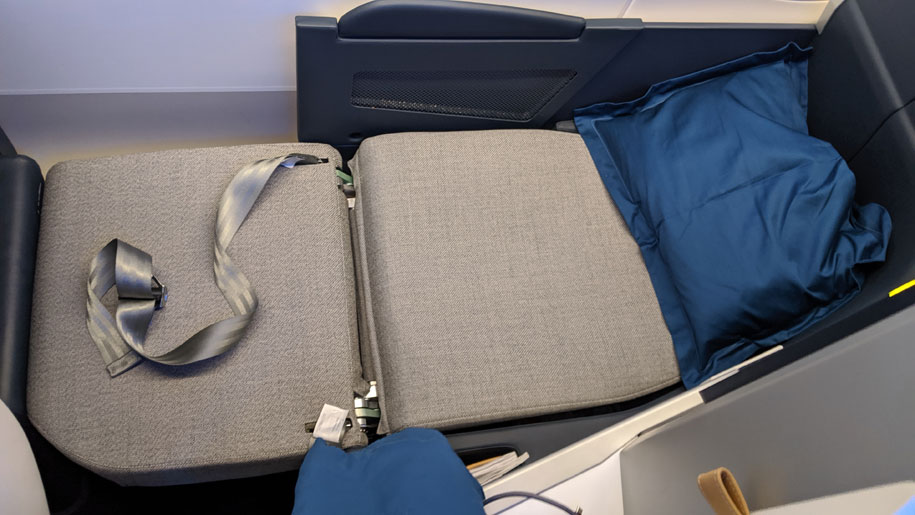 Before landing there was a light snack which was a butternut squash and carrot flan with goat’s cheese and pear on toast. There was also Quark cheese, which was described as ‘the daily product’. It had a very unpleasant taste, so I’m glad it’s only on the menu for the day. Luckily there was also a dessert of a raspberry financier cake and madeleine cake. 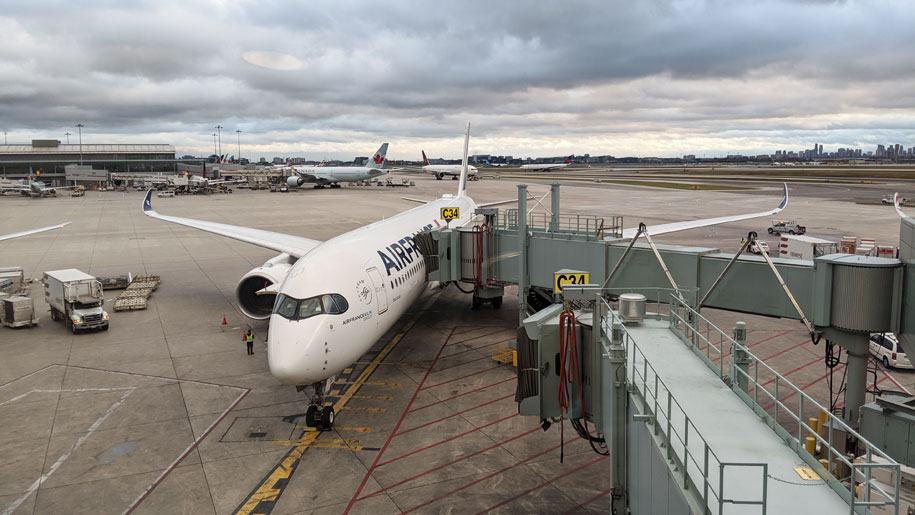 We arrived on time at Toronto Pearson International airport at 1725, and we were quickly off the aircraft.

This is a solid, well thought-out fully-flat business class seat. It isn’t world-beating, but good service from the flight attendants, an above-average choice of food and wine and the benefits of the A350 – a quieter aircraft, better air and pressure, a smoother ride, and wifi for working on day flights – raises it in the rankings.

There’s also a strong table and some storage areas around the seat (more than the Virgin Atlantic seat, for instance). It will certainly be welcomed by Air France flyers.