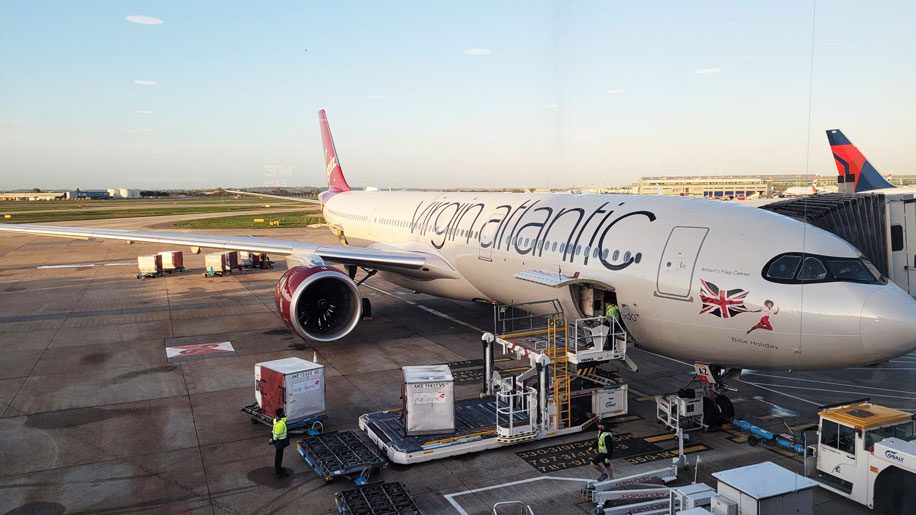 Virgin has ordered a total of 16 A330 neo aircraft for its long haul aircraft, configured, at least initially, in three classes in economy, premium economy and business (Upper Class). The ‘neo’ stands for new engine option (in this case, Rolls Royce Trent 7000 engines), and along with improvements to the wing delivers an 11 per cent improvement in fuel efficiency over the existing A330 aircraft in Virgin’s fleet, and a 50 per cent improvement in noise.

This was the inaugural flight to Tampa, which started in November, initially four times a week and then moving to daily times from November 28, 2022. Our flight was also moved forward in the day to allow for the press conference at the other end. The normal flight time is 1330 but this flight departed at 0800.

I arrived by taxi at London Heathrow at 0600 of my 0800 departure on VS129 to Tampa, a flight time of 10 and a half hours. I had hand luggage only and had already checked-in online, so after getting my boarding card at the Upper Class check-in I took the lift up to the Upper Class security and was quickly airside to the lounge. 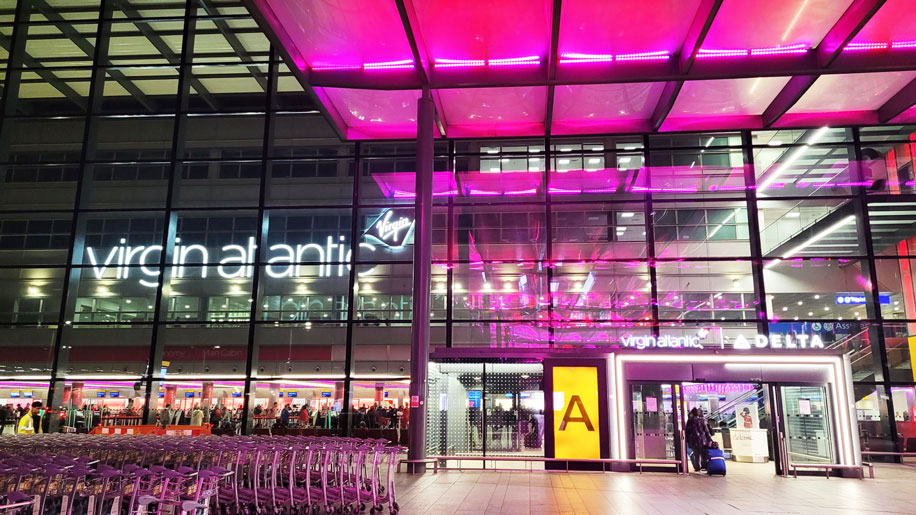 The Virgin Club House normally opens at 0630, but because of our earlier flight opened at 0600. We had a reception with breakfast in the far left hand corner, and though we were among the first to arrive, by the time we boarded at 0715 the lounge was filling up. 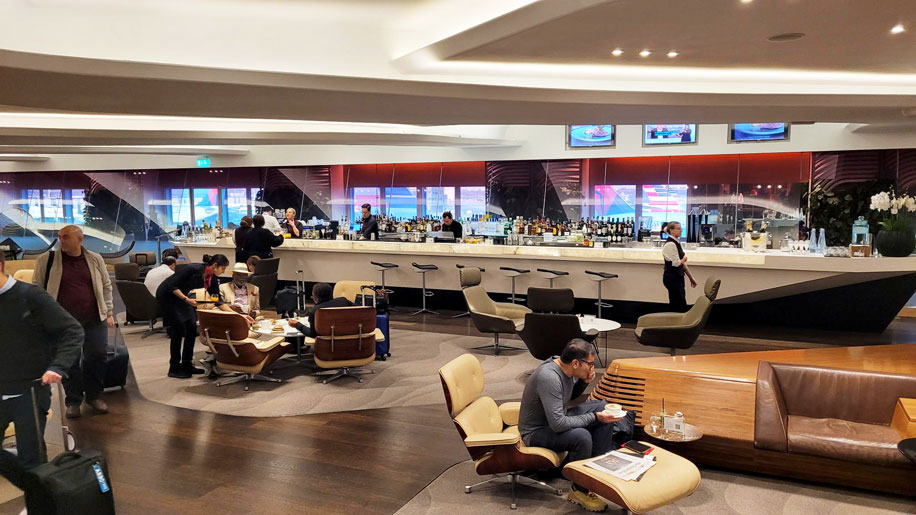 As an aside, unlike some other airlines, Virgin rightly thinks there is a value in providing magazines and newspapers for its guests. 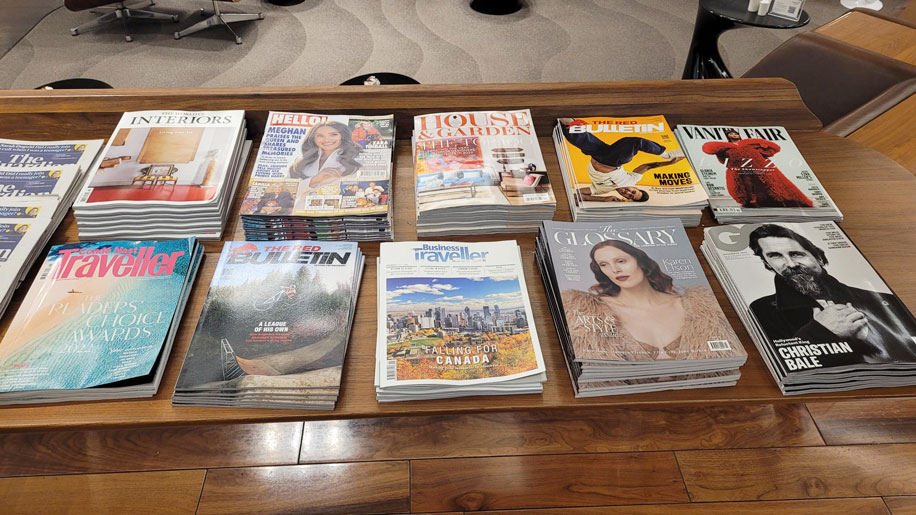 Boarding was from gate 16. We were quickly on board, with two air bridges, so entered from the front door and turned right into the cabin. I was in seat 3G.

Virgin only recently introduced a new version of its Upper Class (business class) seat on its A350s with a partial privacy screen which it calls the Upper Class Suite. You can read (and watch) a video of that on this link

The A330 is too narrow to fit that seat, so Virgin needed another option and has chosen an off-the-shelf seat – the Thompson Vantage XL – which is the same the seat as its sister airline, Delta, has on its A330s, and is also on many other airlines.

The seat are all forward facing in a 1-2-1 configuration of A-DG-K. The seat reclines fully flat with the leg room for the bed being under the enclosed table of the passenger in front. This staggered formation is a common arrangement, though it means that leg room when fully reclined can be quite tight. Virgin has distinguished itself by the design elements such as the Virgin deep purple / burgundy colour scheme, the sliding privacy door and the move away from leather in favour of a material which is up to 50 per cent lighter and uses no animal products in its manufacture.

The seat design for the cabin (and the whole interior of the aircraft) is called, internally, ‘New Horizon’, with stitched lines on the seats, subtle horizontal lines up to the lumbar region on the seat, and also a burgundy mesh pattern in the surrounding areas of the seat. There is also mood lighting which changes with each stage of the journey.

Although the seats are fairly standard, there are a pair of middle seats in the front row (row 1- DG) which have garnered all the headlines and which Virgin calls ‘The Retreat. These two seats will be sold as a premium, for couples or those wanting a more roomy experience. They have more storage room, including an area under the side table in-between the seats. 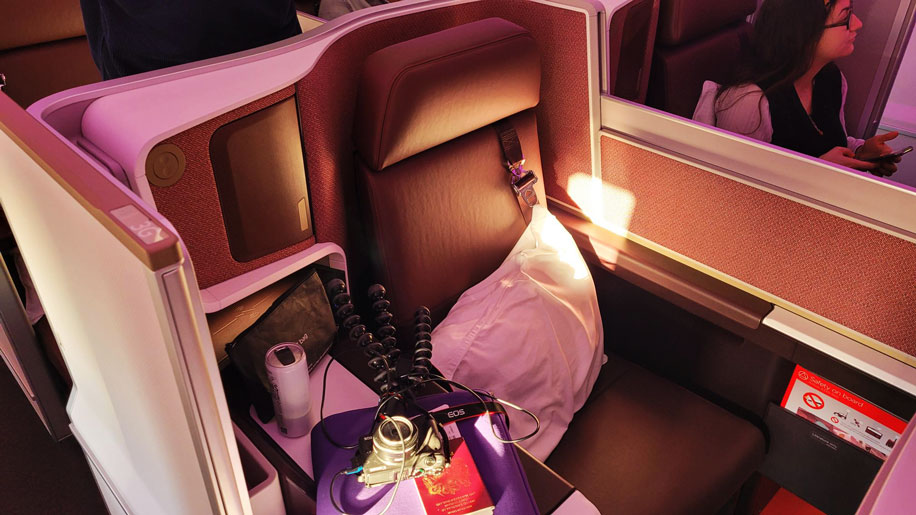 Each seat has a large side table, which has enough room for a laptop if you want to work and then place it to one side when, for instance, the meal service arrives. There is a tray table that comes out from under this side table, but, disappointingly, it is not very robust, vibrating up and down when working on a laptop.

There is a wireless charging area just above the power, but it was temperamental so I plugged in to one of the USB charging points (there is both USB A and USB C). There is also AC power (universal) for charging larger devices such as a laptop. We had a Virgin Atlantic engineer onboard for our flight home, so I know there are a few teething issues with some of the designs elements and power, but Virgin is fixing this so it is hoped that any problems should be fixed by the time you fly. 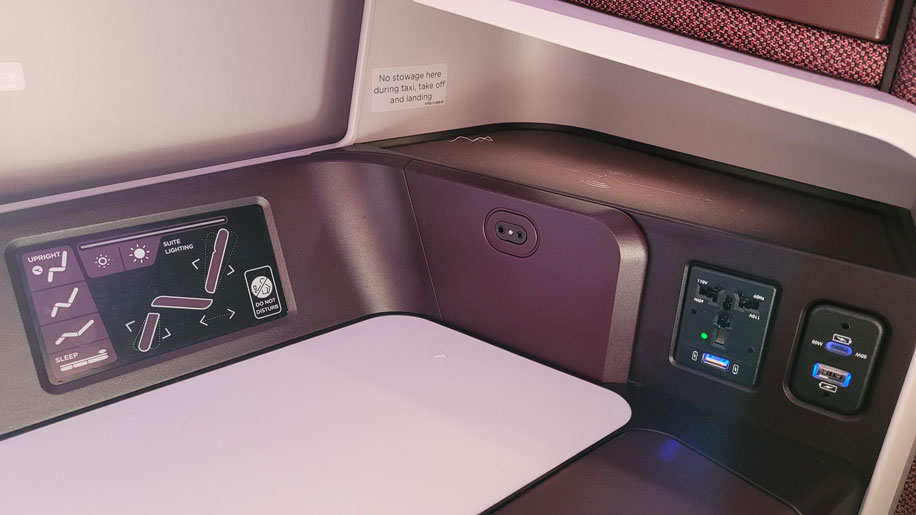 As already mentioned, there is a full privacy door, which is locked for take-off and landing, but thereafter can be closed or opened depending on your preference. If you are in a centre seat (and I was) there is also a central divider which you can raise after take off to give you privacy from your neighbour.

There are a few storage spaces, including one for shoe stowage (though not for take off and landing, a small cupboard where the headphones are kept (Virgin refers to this as lockable, but obviously it isn’t, it just means it has a latch) and also two more spaces for magazines. The window seat storage is slightly larger than the middle seats – the can of water at every seat when we boarded fitted in the window seat storage area, but not in the centre seat’s same area.

The IFE is via a 17.3” touchscreen with Bluetooth audio, do not disturb light and customer-controlled mood lighting. There is wifi supplied through Viasat which was the fastest I have experienced on board a flight. It was £5.99 for 1-hour or £18.99 for full flight. You can do what is called PED pairing, meaning you can use your own device to connect to the IFE to browse the entertainment library, control your screen and activate the call bell. You can also use Bluetooth to connect your own headphones, though the ones supplied in Upper Class are of a good quality. 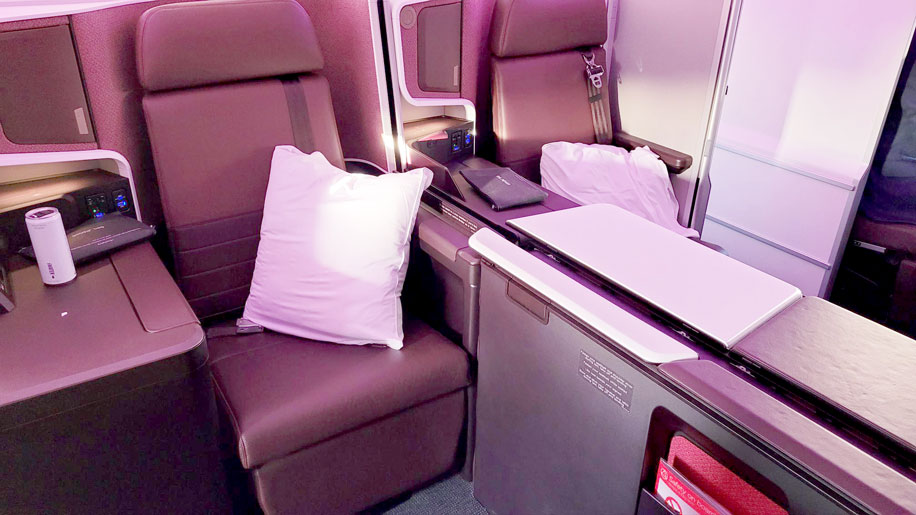 Definitely the Retreat if you a couple, but I think that will cost extra for the seat selection. If that’s not available, then go for a pair of centre seats. For the window seats I’d avoid the front row 1 and the back row because the bar area (called The Loft) is there, and might get noisy if you want to sleep during the day. 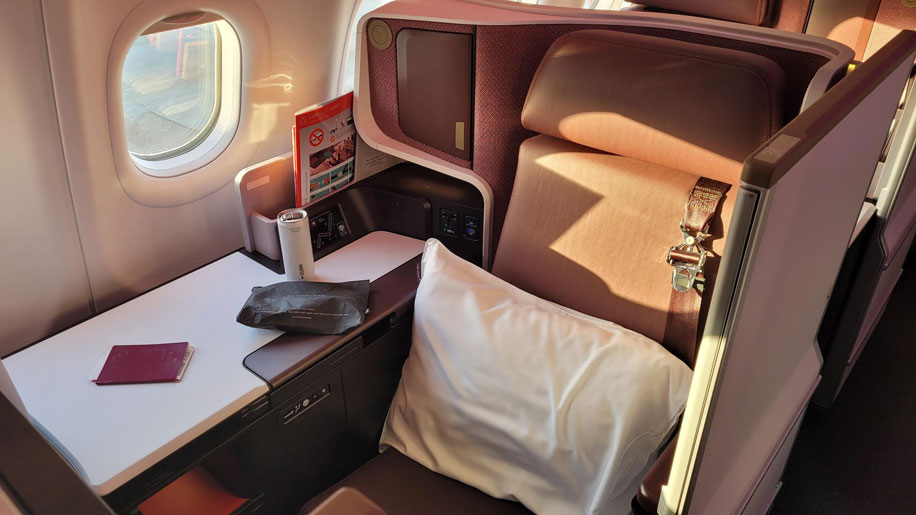 There is also the communal area – The Loft – at the back of the Upper Class cabin. It’s a comfortable space which is ideal for chatting with people. It would be interesting to see what it is ike on a ‘normal’ flight. The maximum capacity is eight people, and if the sea belt sign comes on, four people. We didn’t have much turbulence, so it was usually eight people in there for our flight. We had a mixologist on board and I tried one cocktail – which was rum based and so strong I stayed in my seat for the rest of the flight. 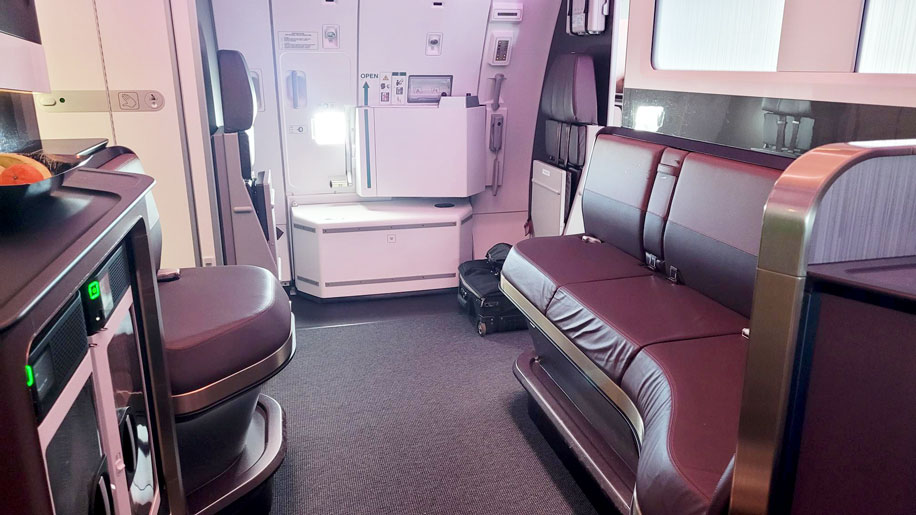 Please skip this next section if food isn’t of interest (reading about it, I mean. I assume most of us are interesting in eating).

The meal service was deliberately delayed on this flight so we could get work done and interview the various Virgin management on board about the new flight, the new aircraft and expansion plans with new deliveries of the A330 and A350 next year.

Served with a selection of artisan breads 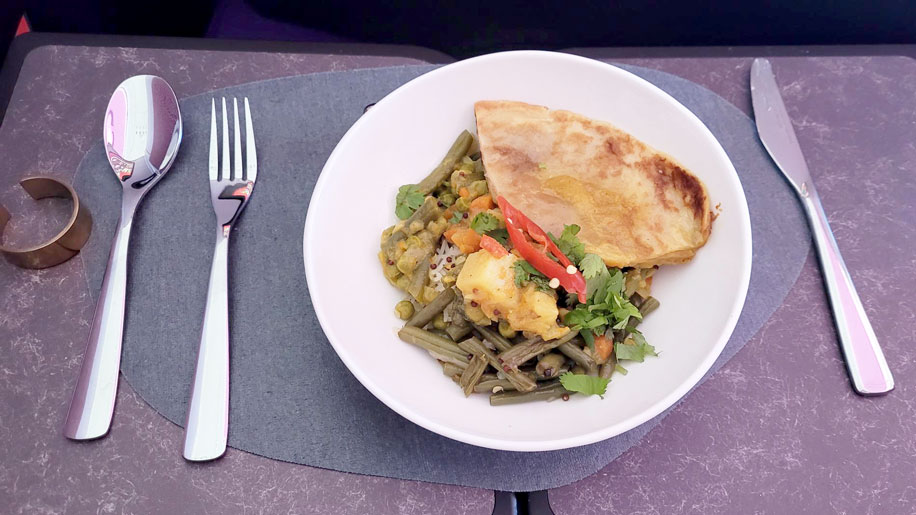 The vegetarian option (korma) was delicious – not too spicy, but with lots of flavours and not too heavy. I’m a fan of curries on planes and this was a very tasty one.

The flight was incident free with the seat belt sign coming on only a few times and only for light turbulence.

After a few hours I asked the flight attendants to prepare the seat for sleep, which involves having a comfortable padded white under sheet placed over the eat, and a duvet on top. Once fully reclined the seat is comfortable but a little tight, especially in the footwell, but also around your shoulders, since the armrests and fixed. The real test for this was the overnight flight coming back and I slept very well on that flight, managing six and a half hours for the nine hour flight duration. Others fared less well, and I think for larger flyers it might be tight and for tall flyers it will be difficult to bend your knees when lying down because there isn’t quite enough room to do so.

The waist seat belts are also far too short – even sitting down they are close to the end of their ‘play’ and several colleagues had to ask for an extension just to have the belt on for take off and landing. For sleeping, when you put the seatbelt over your duvet when lying down, it is quite restrictive if you want to turn from one side to the other in the night. There is also an over the shoulder belt to be worn for take off and landing.

Before landing there was a choice of light bites, from the following list: 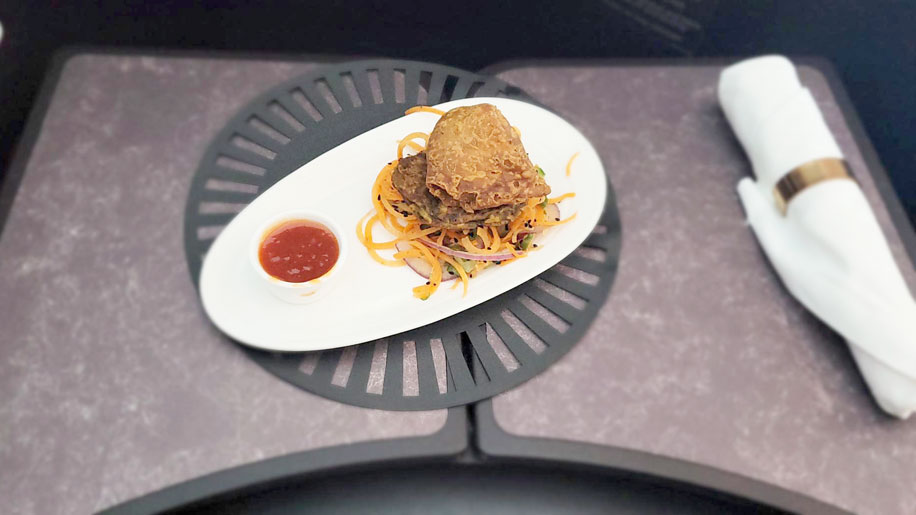 We arrived on time and then were greeted by well wishers and press, then had a press conference with Richard Branson, Shai Weiss and local dignitaries. I didn’t have any checked luggage so after that we were quickly on our way into Tampa.

This is a very well thought out version of the Thompson Vantage XL seat. I was impressed both with the design and also the technology of the IFE, the power options and also the speed of the wifi. The service was exemplary.

The Retreat Suite is available to book 14 days prior to departure for an additional £200pp.”