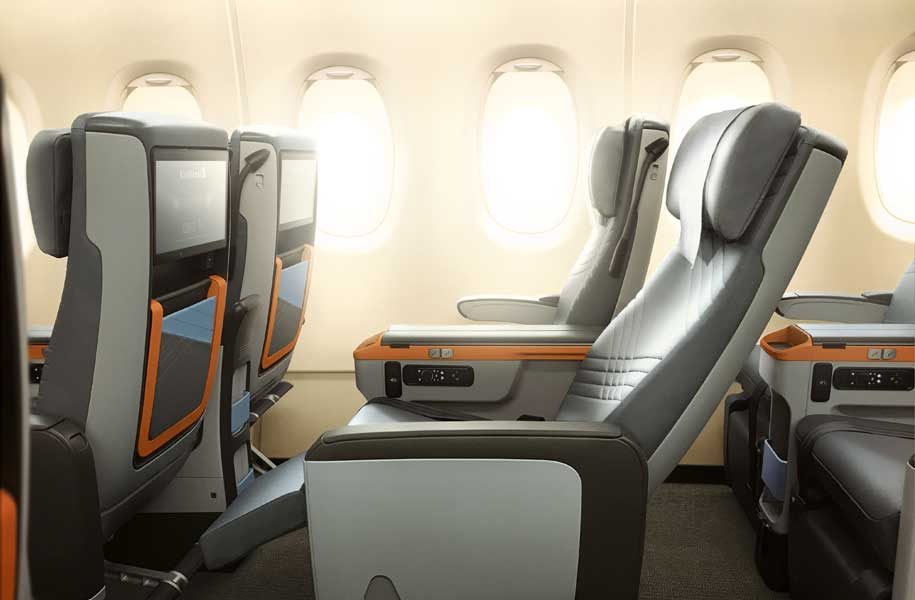 I last flew Singapore Airlines premium economy at the end of last year on the A350-900.

I was interested to see what it would be like on this different aircraft, the A380 in the new configuration.

This review is of the new A380s which have new seating in all four classes. I had flow down to Singapore that morning from London Heathrow in the new first class suites. You can read that review here.

This was a flight back on a Friday night into London, and as such the flight was very busy, meaning it was difficult to take pictures during the flight, hence the use of ones from the airline. 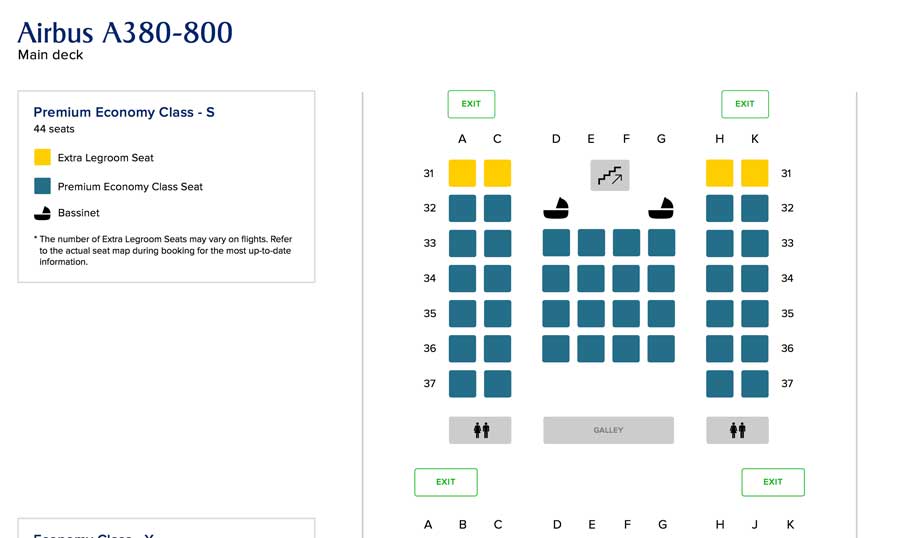 This was a 14-hour flight on SQ322. I was in seat 33D. I had already checked in at the same time as my outbound flight, and I was travelling with only hand luggage. Immigration was quick.

Seat selection is free in premium economy, or you can select an extra legroom seat for an extra fee.

Note that the baggage allowance for premium economy is the same as economy, namely one piece of weight up to seven kilograms and a laptop bag with a maximum dimension of 40x30x10cm each. If your item exceeds the total dimension of 80cm (the length, width and height combined), it will be counted as part of your standard cabin baggage allowance. If the second bag is larger than this, “You will then be required to check in either your cabin bag or the additional item.” I easily exceeded this having a wheel-on bag weighing probably 14 kilograms and then a backpack with my laptop in, so the rules were not stringently enforced on this particular flight. 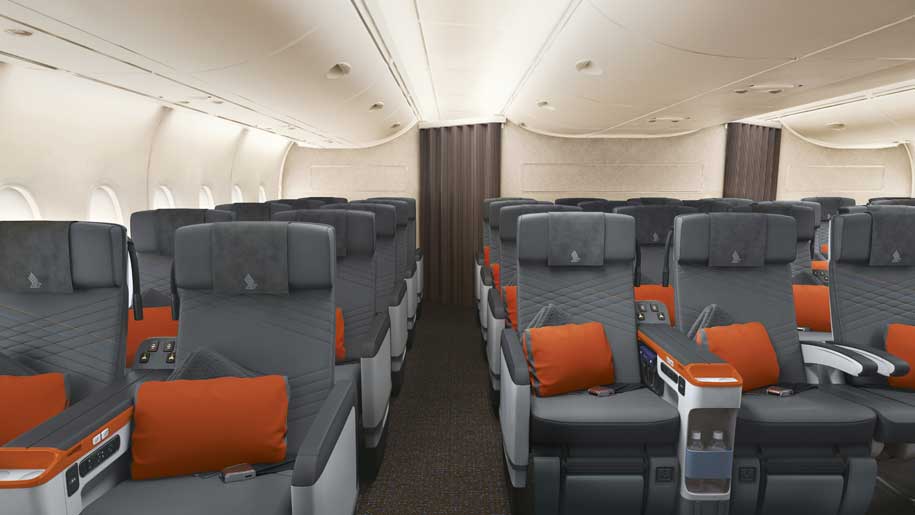 This took place at 2230 at Gate B2. The layout of Changi means you go through security just before these B gates. Some passengers (for other flights) were turned back here because it was still too early for them to go through, presumably because there is a limited amount of space at the gates. Once through, the boarding cards had numbers on them detailing when you are supposed to board. My number said 3, but I went on early so I could film the cabin before passengers sat down and will post the film of the cabin in a few days when it is ready.

There are 44 premium economy seats. Other cabins are six in suites, 78 in business class and 343 in economy class. The configuration on the main deck is 2-4-2 (contrasting with 3-4-3 in economy).

The cabin is self-contained and is wrapped around the bottom of the stairs, so rows 31 and 32 only have seats AC and HK, while row 33 is the first full row. The seats are in a kind of blue grey leather colour, with decent-sized pillows at each seat, noise cancelling headphones which were comfortable to wear, and, after take-off, some flight socks and a toothbrush and toothpaste. If you ask (and I did) you can also get ear plugs and an eye shade.

Each seat has a table which comes out of the arm, and seat power for a plug, as well as two USBs from which you can power up mobile devices. Each seat has a foot rest which is below the seat in front except the front row seats where it comes out from the seat you are sitting in.

What’s interesting (to me at least) is that on the A350 the premium economy measurements (as given by the airline) are 18.5 inches wide, 38-inch seat pitch and a recline of 8 inches. So, unless I’ve got that wrong, the premium economy seat is narrower on the A350-900 by one inch, and is, in fact, the same as in economy on the A380.

With a configuration of 2-4-2 the individual traveller should avoid the four middle seats.

I was in 33D, an aisle seat but the first of these four seats, but in the front row. This was a gamble, since it was by the bulkhead, and so potentially had more room, but it also had the possibility of a bassinet somewhere on the row.

Seat selection is free in premium economy, or you can select as extra legroom seat for a fee. In this configuration these are four seats in row 31 – AC and HK.

Also note that Row 33 doesn’t actually have any overhead lockers, which causes congestions in the lockers above the aisle seats. 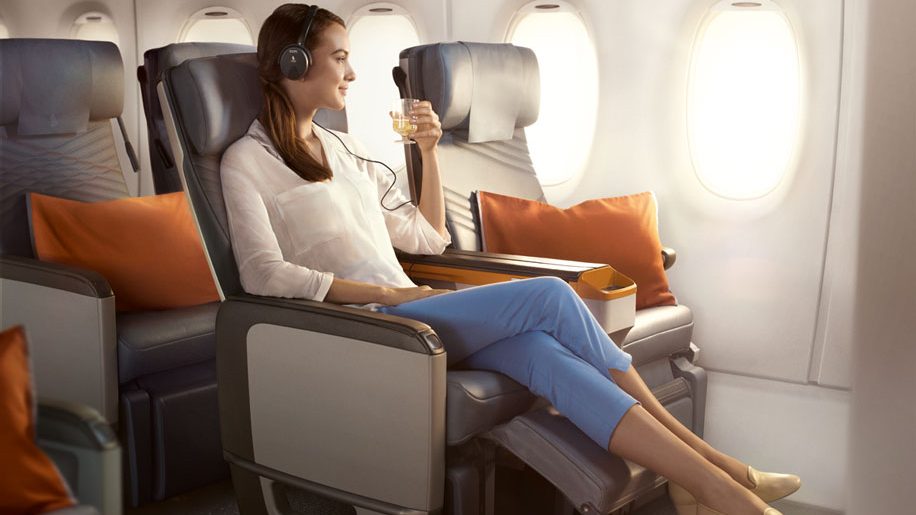 We took off around 0010 for the 14-hour flight back. The in-flight entertainment system was already on, so apart from the interruption of the safety video, most people were already either asleep or preoccupied. The meal service started with drinks at 0100.

There was a choice of champagnes (I didn’t catch what the choices were, however), red or white wine, beers and cocktails including Singapore Sling, though I imagine the latter would have been pre-mixed.

The flight attendants then came round with special meals (vegetarian, diabetic and so on), and perhaps main courses pre-ordered online at least 24 hours in advance (a service that Singapore Airlines calls Book the Cook). There is no additional charge for Book The Cook.

The premium economy menu for Book the Cook is slightly different to the one on suites and first, and is also different to the business class version. The menu also varies depending on where you are departing from.

Flying out of Singapore, the Book the Cook options for premium economy are listed as: 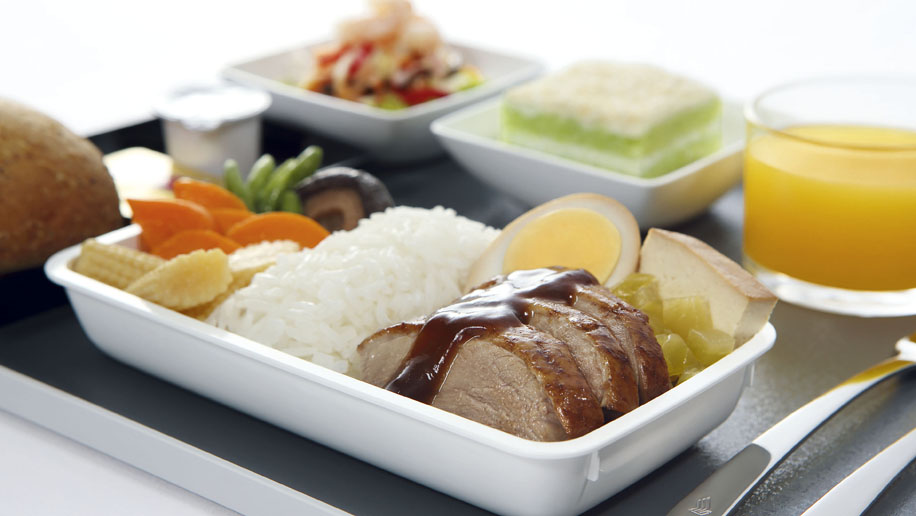 If you don’t order a a special or Book the Cook menu, the default menu is still pretty good. On my flight, the seasonal menu included:

Dessert was ice cream, and the meal came with a bread roll and spread.

I went for the pork and thought the meal was pretty tasty. A note on the menu told me that the dried oysters and black moss “Are symbolic ingredients during Chinese New Year as they represent good fortune and prosperity”, which certainly made me feel a lot better, as did the premium ice cream afterwards.

I waited until the tables had been cleared and then slowly reclined my seat so as to not disturb the person behind. In the front row a leg and foot rest comes out, and together with my backpack this raised my feet into a comfortable position and I slept well, using the ear plugs and eye mask I had asked for. It’s a long flight, but I probably got five hours sleep, and watch the in-flight entertainment the rest of the time, which was of good quality and a huge range of very modern films (including ones still in the cinema at home and up for Oscars).

There is in-flight wifi available onboard, but I did not use this (I had used it on the way over in first class, but that was because the first 100MB was for free).

Breakfast was served about two hours before landing (there were in-flight snacks available – sandwiches, nuts, crisps, trail mix and fresh fruits, but I didn’t have any).

The breakfast menu was, like the supper, served directly on a tray and was seasonal fresh fruit and a choice of main course.

I had the noodles, which were great, along with croissant, breads and teas and coffees. 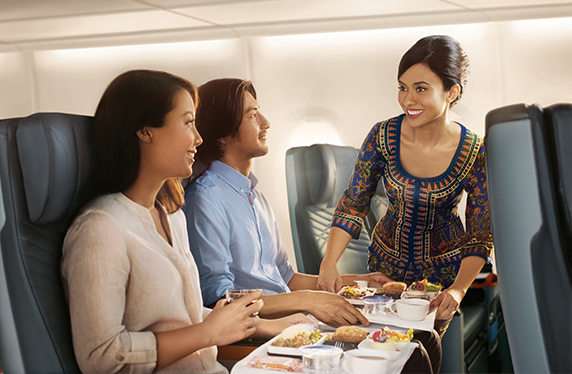 We arrived on time into Heathrow Terminal 2, and had the long walk back to the main terminal and immigration, where there was no queue. I had no bags to pick up, so then made my way quickly through to landside and my journey home.

Another excellent journey with Singapore Airlines. Premium economy is a good choice for these long haul overnight routes if your budget doesn’t stretch to business class (or the First Suites). The food is good, the choice of entertainment excellent, there’s enough room, and the seat is comfortable enough to get some sleep. 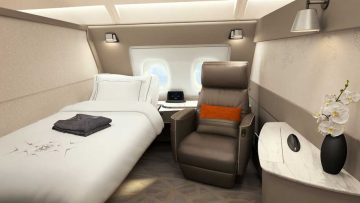