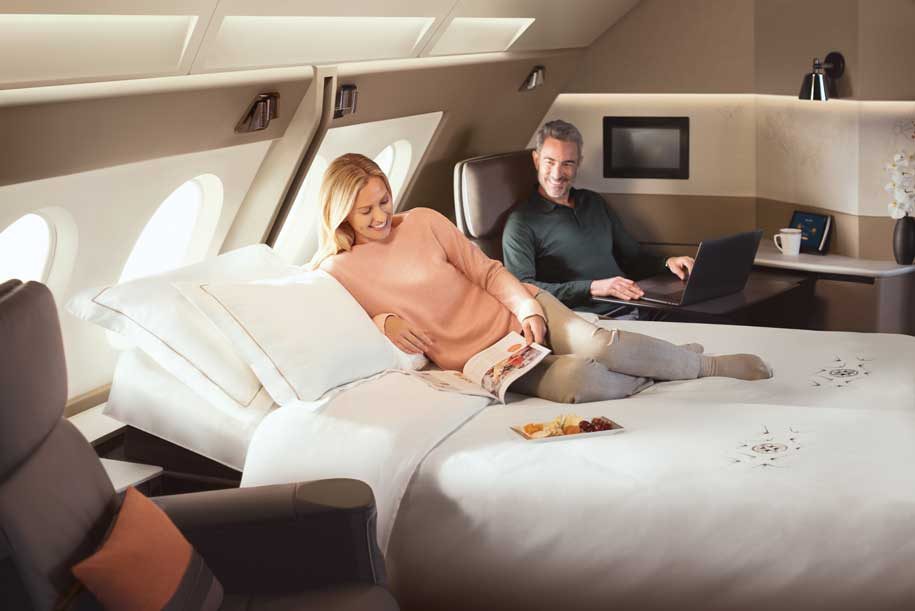 Singapore Airlines is in the process of introducing new seats on its A380s in all four classes: economy, premium economy, business and first. These will be fitted to its entire Airbus A380 fleet, including retrofit work on 14 aircraft that are already in service starting in late 2018 and targeted for completion in 2020, as well as the five new aircraft entering service.

We have previously reviewed the new Singapore Airlines A380 business class

And also the new Singapore Airlines A380 economy class.

This is a review of the new First Class Suites. You can watch the video review above. 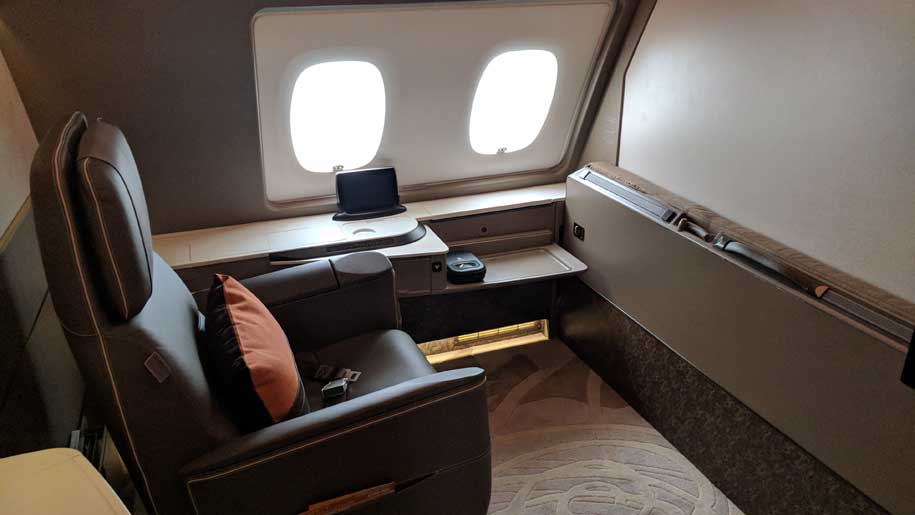 I arrived at London Heathrow’s Terminal 2 at 0630 for my 0910 departure on SQ305 to Singapore, a flight of some 12 hours. Check-in for the Star Alliance carriers is at Zone A, and is a little confusing since the premium check-ins are behind the economy ones. Once I’d found the right desk the service was quick. I had no bags to check and was directed to fast track security and was quickly airside.

The KrisFlyer Lounge is in Terminal 2B which means a long walk (or a buggy ride) under the taxi way and then back up on the other side to access the gates and the lounges.

I’ve been in the business class KrisFlyer lounge before, but this was the first time in the first class lounge and so I have written a separate review of it and video which I will post here later.

Boarding took place at around 0835 and I walked the short distance to Gate 42. There were dedicated queues for both business class and first class / suites. There was no queue and the once down the air bridge there was a choice of two doors with door B taking us to the upper deck and the first class suites. On board, my boarding card was checked and I was taken the few steps left into the first class cabin which at first seems like a short corridor with suites on either side, six in total with a configuration of 1-1, A and F. The suites are on the upper deck at the front of the aircraft, and since they are in front of the engines they are very quiet during the flight.

The layout of the suite takes a little getting used to. There is a leather arm chair facing forward, and then running perpendicular to this in front of you is the bed, which is folded up when you first board.

Along the side of the cabin by the windows are several storage spaces for magazines and bags, and there is a private wardrobe for hanging your clothes and storing wheel on bags, though larger bags are stowed at the front by the two washrooms. 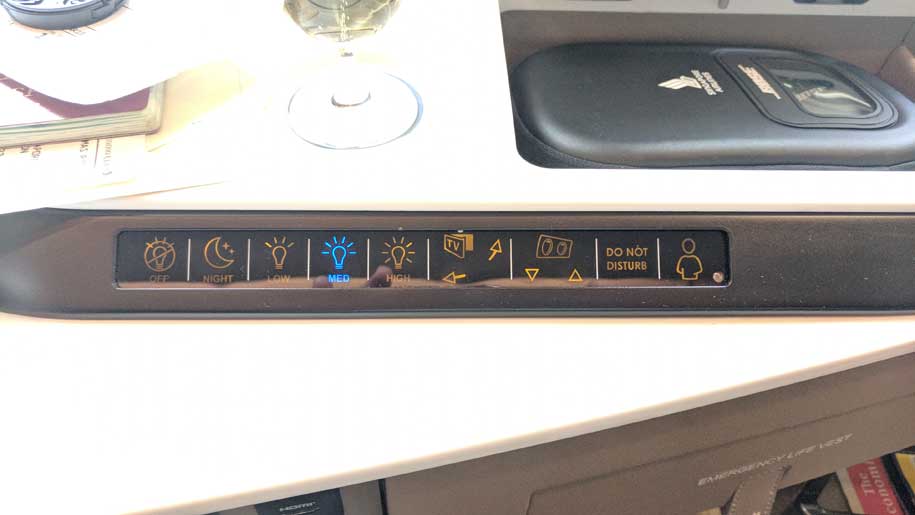 The leather seat – which has a seat width of 21 inches – can be moved to one side or the other to swivel either towards the two windows, or towards the table area and television. I was so busy moving it around that only later did I realise you can also recline the seat and raise the leg rest if you simply want to sit back and read.

The table comes out of the side of the cabin and is very large and firm, and can be turned so that it is directly in front of the table for dining or working, or kept slightly to one side if you just want to rest things on it. As you can imagine, there is a huge amount of personal space, and you can get up and walk around if you feel like stretching your legs without ever walking out into the corridor. 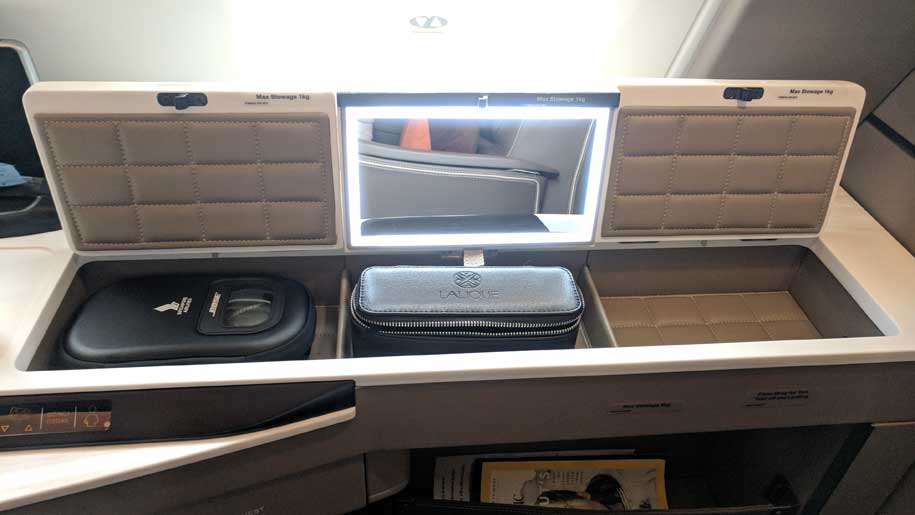 The suites have sliding doors for privacy, and though they don’t reach to the ceiling, they are useful, because the seat revolves towards the door for when you are watching the inflight movies or working at the table or dining, and this means you are facing the aisle and the suite on the other side of the aisle, so if you keep the door open you will be eye to eye with your fellow passenger on the other side of the aircraft. Luckily for me, there was no one in 3A and I was working and filing an inflight video review, so I kept it open for the first few hours but then the flight attendants asked if I’d like it closed and that’s what I did.

The suites have a number of charging points, including one power point in the wide table when you are working and another by the bed, so you could keep two devices on that way, and a third through the USB charging. 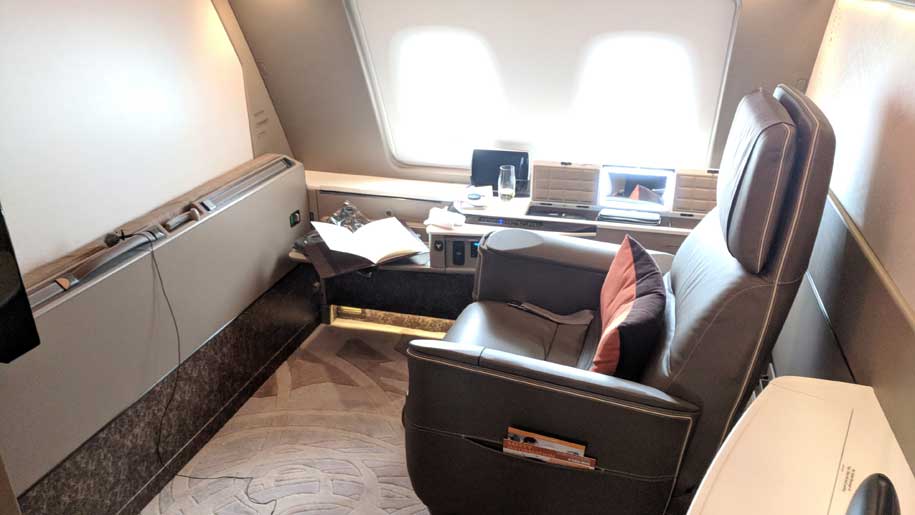 Which suite to choose?

Almost a trick question because these are superb. If you are travelling as a couple you can choose either 1 and 2A or 1 and 2F and these two seats have a divider allowing you to spend time together and make a private suite with a double bed. Alternatively, if it’s a colleague you can have the divider down to chat, and then have separate beds with the divider up when it’s time to sleep. I was in 3F and this is one of the two suites which does not have that option.

I suppose this final row – 3, gets the noise from the galley whereas the other ones don’t but I can’t say I noticed. There really isn’t a best one.

In the wardrobe there are socks and slippers, and then I was given a Lalique washbag containing a few useful items along with a candle and a bar of soap. Since I was travelling with hand luggage only I wasn’t sure if I would be able to hold onto this for my return journey, but in the event there was no problem. I asked for some pyjamas, which are also Lalique, and after take-off changed into these for the flight and hung my suit in the wardrobe.

As well as a hot towel, we were offered drinks, including a choice of the two champagnes on board: Krug 2004 or Dom Perignon 2006. There was a slight delay in taking off because of the bad weather and the need for the aircraft to be de-iced, but we eventually took off around 1000. Luckily, I had no connections to make in Changi and besides, I was confident we would make up the time during the 12-hour flight. 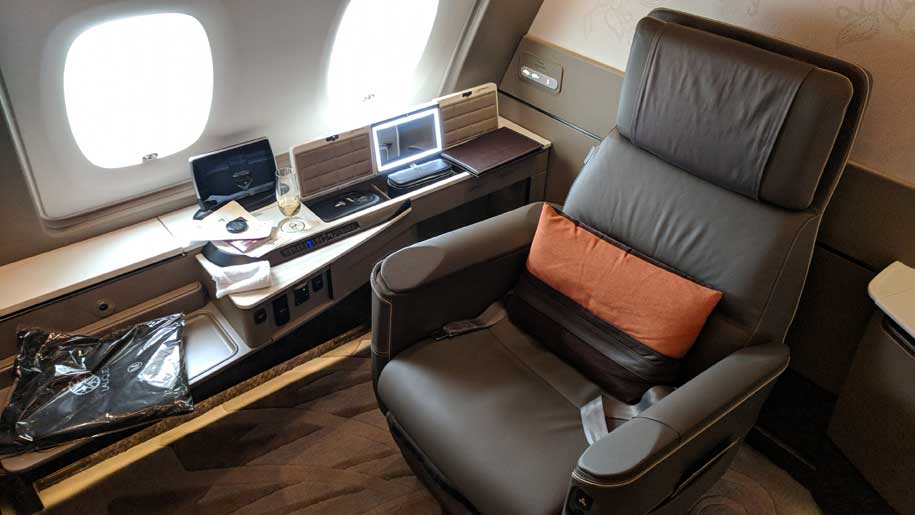 The choice of food is huge, and of course on top of this you can also Book the Cook and select from an even wider selection of dishes prior to flying. The menu had a selection of dishes by two Michelin-starred chef Carlo Cracco, so I decided to try these.

This was a starter of Prawns with shaved pumpkin-radish salad, pea cream soup with mussels and squid ink, a main course of seared Iberico pork loin with apple puree and pork jus and then some Italian ice cream (Cantucci E Gelato Al Vin Santo. The pork had a lot of flavour, but was slightly tough, but overall I was impressed with the food and the presentation – each course served by flight attendants with an explanation and a query if I’d like to change my choice of drink. 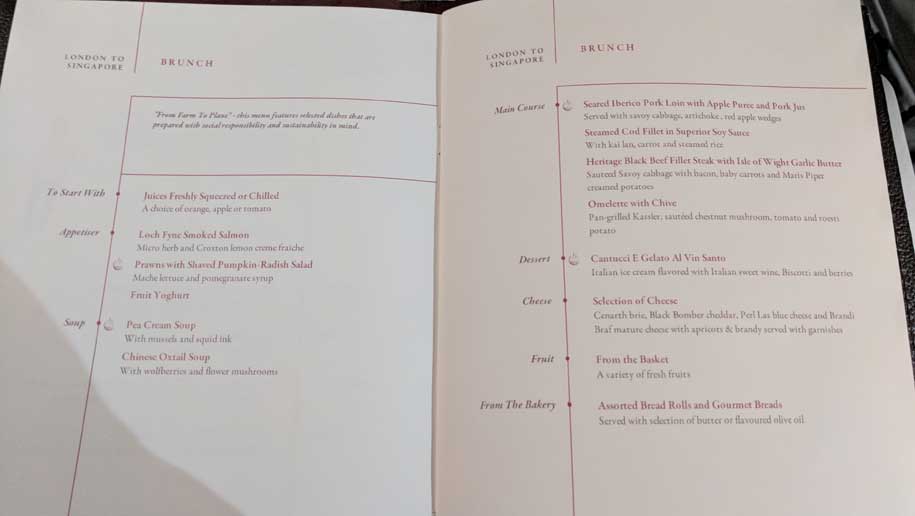 Other choices for this brunch menu were appetizers of Lock Fyne smoked salmon, Chinese oxtail soup and mains of steamed cod fillet in superior soy sauce, heritage black beef fillet steak with Isle of Wight garlic butter and an omelette with chives.

Cheeses on offer were Cenarth brie, Black Bomber cheddar, Perl La Blue cheese and Brandi Braf mature cheese with apricots and brandy. These were delicious, especially when drunk with the 2006 Claret (see below).

During the flight, options, among others, were Egg noodles with prawns, vegetables and Oriental chicken stock; Kway Teow with chicken, black mushroom and Oriental chicken stock or Beehoon noodles with Chinese greens, black mushroom and vegetable stock. There were also sandwiches, chocolates and snacks such as crisps and assorted nuts, as well as fresh fruit.

Hot drinks included Illy coffees and a selection of single-origin ones including Guatemala, Brazil and Ethiopia, and a wide range of teas from TWG as well as Chinese and Asian teas and soft drinks. 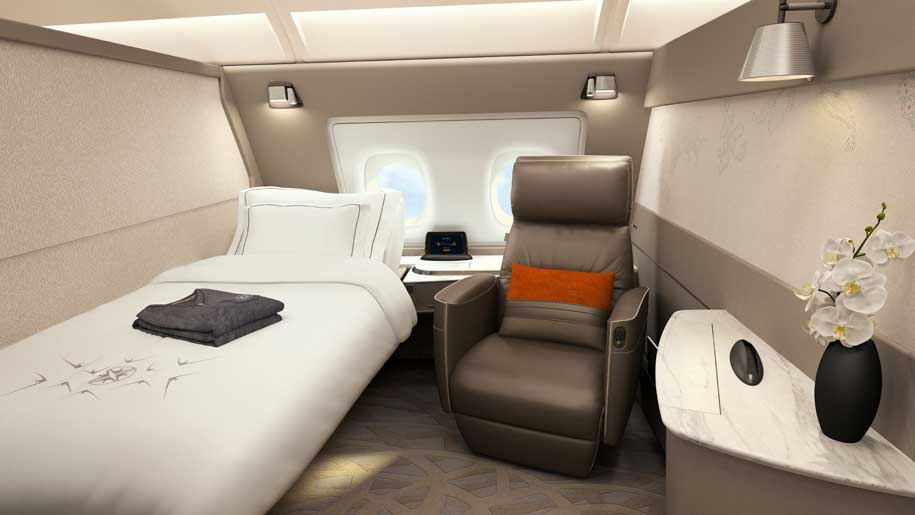 Although it’s tempting to eat and drink for the whole flight, this was a day flight from the UK, but one landing in the early morning in Singapore, so I was keen to try and get a few hour’s sleep, if only as an afternoon slumber.

On request, the flight attendants come into the suite and lower the bed from the side wall, put a mattress topper on it, prepare the pillows and then the duvet on top. (You can watch them doing it on the YouTube review.)

It doesn’t take long, and once you get into the bed there are some thoughtful touches such as a lever by the side of the bed allowing it to be raised so you can read in bed and watch the television in comfort, then lower the bed down to horizontal when it’s time to sleep. The bed is 76 inches long, so will have enough room for most flyers.

There is a separate headphone jack by the side of the bed, and unlike many hotel rooms, the lights by the side of the bed are easy to use, with pre-sets including off, night, low, medium and high. There’s also a Do Not Disturb button and a call button, and if you like you can raise the window blinds during the flight.

The safety belt comes across your chest, and I found this troublesome, partly because it’s difficult to find the slot to secure it into, and also because it quickly becomes quite tight across your chest, so much so that I found it difficult to turn over when in the bed because I was almost secured to the mattress. This is a good thing for safety, perhaps, though not if passengers decide to undo it during the night because it’s uncomfortable.

I only slept for a few hours and then watched some films on the outstanding IFE system – the screen is 32 inches and extremely high definition, and the Bose noise cancelling headphones make it a very pleasant experience.

About two and a half hours before landing we were offered breakfast. Again, there was a wide choice including seafood noodles soup, citrus French toast, Dosa aloo masala, Murgh Keema, Palak Wadai or fresh eggs – baked, scrambled or hard boiled.

I chose from the snack menu – some noodles, and had a couple of cups of single estate Illy coffee. I then worked and listened to some music. We landed ahead of schedule, and there were no delays in disembarking. I had no bags to collect and so was quickly out into Terminal 3. 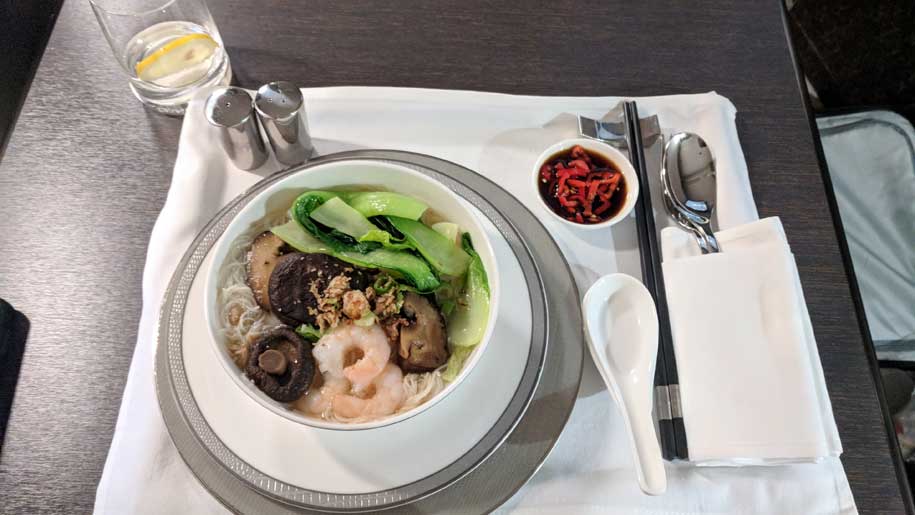 It’s hard to see how these first-class suites can be bettered. You have lots of room, lots of storage space, extremely impressive food and drink, superb service, and a comfortable seat and separate bed for when you want to sleep. There’s wifi on board with the first 100MB complimentary, and plenty of power for keeping everything charged up while you work.

Finally you are upstairs at the front of the A380 – and if you’ve flown much on this aircraft you are likely to have been impressed by how smooth and quiet it is on board – I know I am, and none more so than at the front in one of these first class suites. Simply excellent.