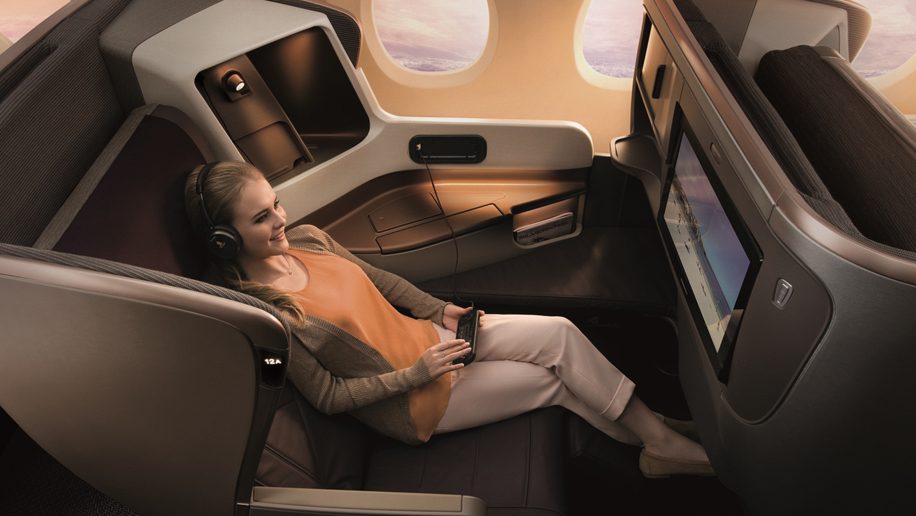 Singapore Airlines (SIA) began this non-stop service to San Francisco on October 23, 2016, using one of its new A350-900s to offer enhanced comfort levels on the 15hr 45min flight. This was the inaugural flight, using a plane delivered less than a month previously, and was preceded by a short ceremony and lion dance at the gate.

Flight SQ032 leaves from Changi’s Terminal 3 building. Singapore Airlines’ Business class check-in is in row 6 and there are ten counters available. Even at 0715 it was busy, with at least three people queuing at each counter, but five minutes later I was at immigration – also busy – and after another ten minutes I was airside.

Turn left from immigration and up the first escalator to the lounges. The Silver Kris lounge is a huge space with many sections of easy chair and sofa seating available, though most don’t have easy connection to a power port for mobile devices, which is unusual. However, there’s an extensive area of business desk booths near the entrance. Wifi is easy to connect and fast.

The lighting is muted, light jazz plays in the background, long racks offer plenty of newspapers and magazines, and it’s easy to find a quiet spot. The buffet food counters offer a typically varied range of hot and cold dishes, plus a good selection of beverages. To the left of the entrance are six shower rooms. While it didn’t feel particularly up to date with modern device-charging needs, it’s nevertheless a very good lounge with space and facilities enough to suit everyone. 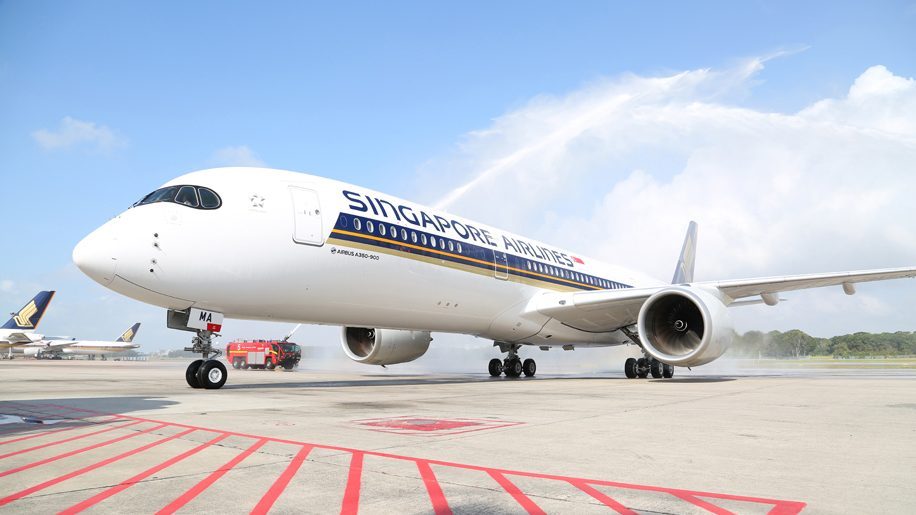 The plane was at gate B8, a 10-15 minute walk away from the lounges. Security checking was swift, and boarding began at 0855 for the 0925 scheduled departure. Once on board, my jacket was taken and a juice offered. The aircraft pulled back from the gate on time, and we were in the air by 0950.

I was in a central seat (20D) – it smelled and looked brand new, with solid plastic moulding and smooth leather seats in neutral grey tones. First impressions were that the seat is very wide and comfortable, and the panel separating you from your neighbour is substantial and provides reasonable privacy – enhanced by a sliding panel, though this does not block your vision of your neighbour’s monitor when in normal seated position. A good-sized cushion was also a plus.

There’s no overhead baggage container above the central seats so it feels very spacious, but storage is relatively limited in the seat area, with a small cubby hole on the facing panel next to the monitor for mobile phones, etc (there’s also a vanity mirror here), another on the side rest where the noise-cancelling headphones are located, and a recess under the offset padded bench that (only just) held my small rucksack. There was nowhere to put my laptop until after take-off, when I was able to slide it into another recessed area behind my shoulder (stowage here not allowed during take-off and landing). 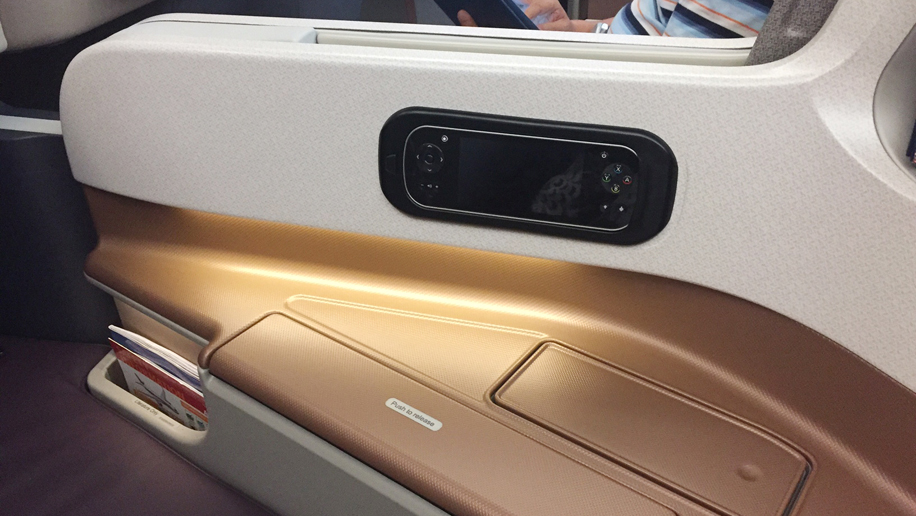 Good reading lights were behind both shoulders, and under one was a panel containing a universal socket, HDMI port, two USB ports and an iPhone socket. The 18-inch monitor had no touchscreen function but the control centre above the side rest did and was clear and easy to use. SIA offer a “Companion App” within their general airline app that allows you to browse content pre-flight and place movies and TV shows in a “Favourites” folder for access on board, when you can link your smartphone to your monitor and use it as a control device – very useful, especially once you’re lying down.

Wifi is available at the following rates: 1hr/US$11.95; 3hrs/US$16.95; full flight/US$21.95 – it took a while to register and connect, but then provided the fastest connection I’ve managed so far on a plane.

The lie-flat bed requires you to put it to upright position (button controls are under the aisle-side armrest), stand and flip the seat over then extend it flat – the blanket and pillow are behind the seat back. It worked fine, but the seat control motors were slow, and the lack of any one-touch seat buttons was surprising. The footwell bench being offset, I often found myself slightly twisted in my seat.

This seat product uses a straight 1-2-1 configuration (A-DF-K) of 42 seats across two cabins (26 in the first and 16 in the second) separated by the galley and washrooms. There’s really not much to differentiate them, but window seats provide a little more privacy, and I would choose a seat as far towards the front of the first cabin as possible, for distance from the galley. 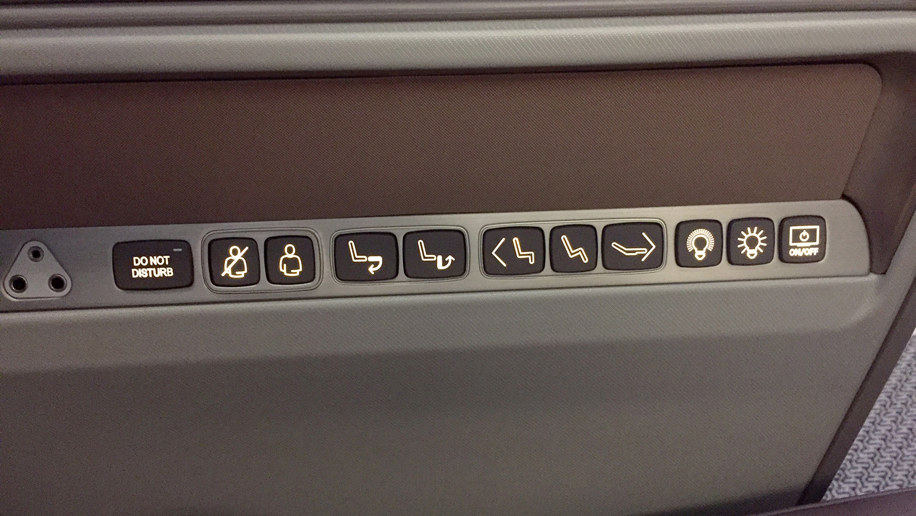 Soon after take-off a tray was brought round with canapés and drinks, and my meal order was taken – there’s an extensive à la carte menu but I chose the (celebrity San Francisco) chef’s selection of grilled asparagus with prosciutto ham; seared bass fillet with kale, raisins and pumpkin purée; and chocolate bread and butter pudding for dessert. I was not disappointed – it was all excellent. Two white wines, a Champagne, two reds and a port were offered with the meal – I opted for a fresh and fruity 2015 Mud House sauvignon blanc from New Zealand, a good accompaniment for the fish.

The seat’s table –which pops neatly out of the side rest – was slightly high for me even at its lowest setting, and after my coffee I put it away and worked with my laptop on my lap. I then made the bed and lay down to sleep. As already mentioned, the footwell is offset towards the middle of the plane, so you lie diagonally, but this was not a problem. What was a problem was the noise level – being a morning flight many people stayed awake for most of the flight, and there was constant coming and going, and much clinking and chatter from the galley.

I usually adjust my watch to destination time on long-haul flights and work to that, which meant staying awake for five hours, then – at midnight San Francisco time – sleeping for six hours before having breakfast and working for the final four or five hours. This was simply not possible, and the crew turning the lights on at 3am (destination time) to serve “mid-flight noodle bar” meals made it harder, even with an eye mask and pillow over my ears. I gave up after three hours and watched a movie.

At 0615 (US time) we were served a choice of American, continental or Asian breakfasts; my American was substantial and tasty – making me wonder why SIA were offering a third “mid-flight meal” rather than the normal snacks/noodles in the galley. It seemed unnecessary to me. 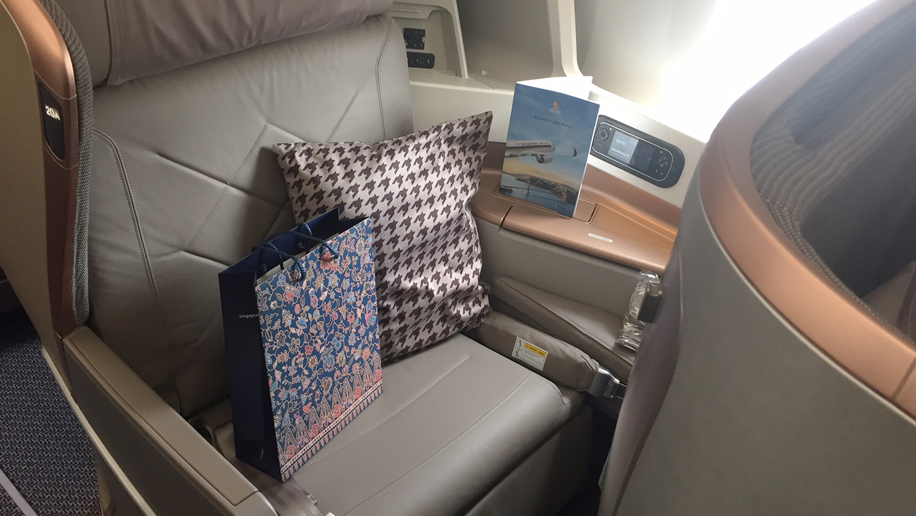 Descent commenced at 0805 and we landed more than 90 minutes ahead of schedule at 0837, having made excellent time over the Pacific. We disembarked at 0850 and for once the US customs and immigration process was swift – I collected my bag and was away from the airport by 0915 on the 30-minute drive into the city centre.

A spacious seat product on a very good plane, enhanced by excellent service and internet extras that add value. Because of the day-long timing of the flight, however, you’ll need to be a heavy sleeper to get any shuteye.

Internet rates for a midweek return business class flight from Singapore to San Francisco in mid-December start from S$12,058 (US$8,703) including taxes and surcharges.