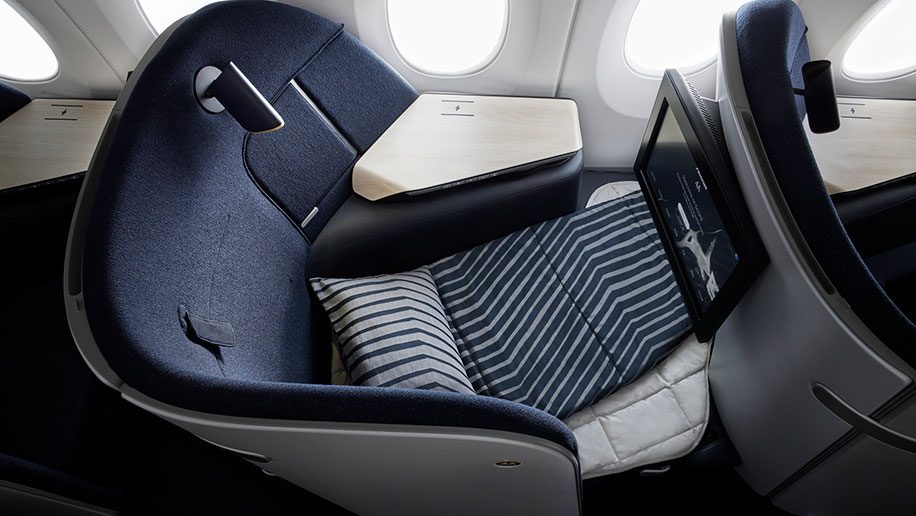 In May 2022 Finnair introduced a new business class (called the Airlounge), premium economy and economy on its retrofitted A350s and A330s. The new seats will also appear on the A350s that are yet to be delivered. Finnair expects the whole long-haul fleet to have it by the end of 2023. and, at the time of writing (December 2022), seven out of 17 A350s have been refurbished and five out of eight A330s.

Finnair is a popular choice for flights to Asia and flies to Helsinki five times a day for onward connections.  It currently flies once a day from Helsinki to Singapore.

Although this review is of the A350-900 leg from Helsinki to Singapore, I have included details of the flight connection from Heathrow for completeness.

I checked in at London Heathrow T3 at zone B. It was quick, and in fact there was not a single person waiting at 1635 for my 1810 flight to Helsinki.  I was given passes for my flight to Helsinki and subsequent flight to Singapore.  Finnair uses the Cathay Pacific Lounge at Heathrow, and if you are a oneworld elite cardholder there are also the Qantas and BA lounges. The flight to Helsinki may be operated by everything from a narrow body short haul aircraft, which is what I had, through to a A330 or A350. It departed Heathrow on time, and arrived at Helsinki on time, which was fortunate since it was only a short connection time in Helsinki so I did not use the Finnair Lounge (Platinum Wing), instead making the short walk from my arrival gate to the boarding gate for my 2325 flight (AY0131).

The gate was already open and with little delay I was in the priority boarding area and at 2300 we started to board.  As soon as I was at my seat I was offered a drink and my jacket was taken.  My main course food and drink order were taken. The plane pushed back a few minutes late at 2342 and with de-icing was airborne at midnight.

The AirLounge seat is unique in that it does not recline but still turns into a bed. It has a fixed back so with the exception of the foot rests your sitting position is fixed. The seat converts into a bed when you raise the footrest on the seat and leg rest at the foot rest. This effectively fills in the gap between the foot rest and seat. As the seat does not recline you have to slide down the bed/seat to sleep. The bed is spacious and I had no trouble sleeping on my back or turning onto my side.  When sleeping there is seat belt that goes around the waist. Unlike others I have tried, this was tensioned like a car seat belt so is tighter against the body. I thought this might restrict me as I moved so decided to keep it off and hoped for no turbulence. For take-off and landing there is the waist belt with shoulder strap. 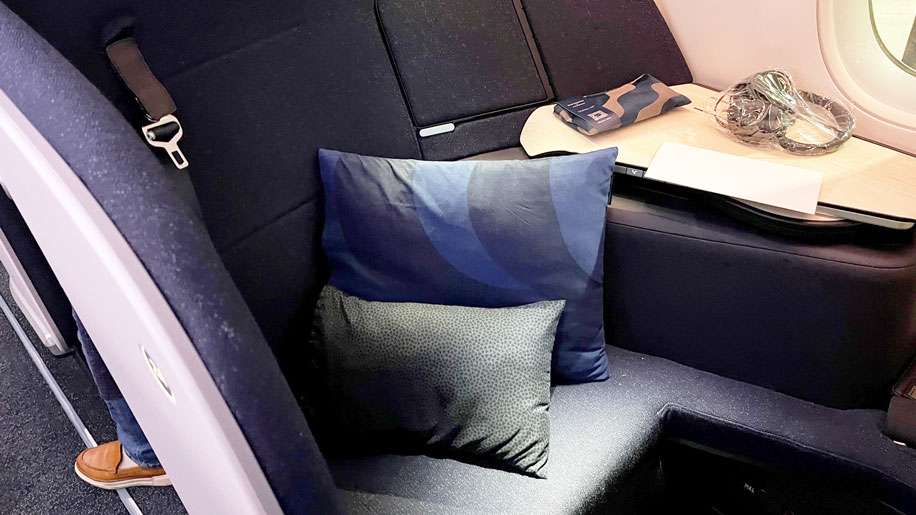 When I arrived at my seat there was a mattress cover and blue duvet (by Finnish brand Marimekko) in the footwell along with a pair of slippers.  On the seat there was a cushion and a pillow with one side memory foam and the other polyester fibre.  There was also an amenity kit with eye mask, ear plugs, toothbrush and lip balm and face cream from the Swedish Brand L:A Bruket. The seat is made of a dark blue fabric and the foot area in blue leather.  The colours made the cabin a lot warmer/cosy than the previous business class cabin. 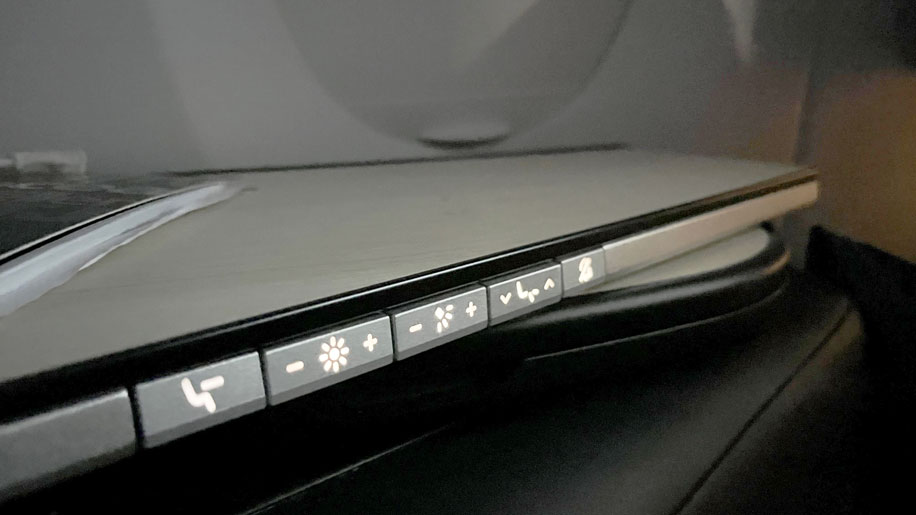 The fact that the seat does not have any complicated reclining mechanism means that this space can be given to the passenger creating a great sense of space. There is no door but the curved and high nature of the shell and the fact that you are angled away from the aisle does give real privacy.

There is a storage area for a laptop and some personal items (plus a water bottle which was in situ before boarding) and space under the footrest for your shoes. The wood laminate table is smaller than some but is sold and flexible in terms of position and when combined with the surface next to your seat means there is plenty of space for a laptop, drinks and papers etc. 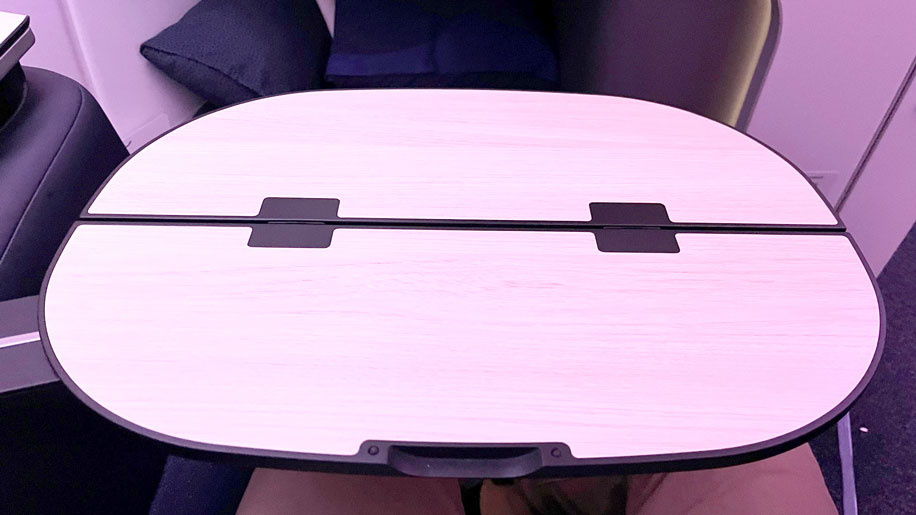 The controls to the side of your seat release the tray table, raise and lower the footrest, switch on and dim the very flexible reading light, and the lights in the foot area as well as controlling the red ‘Do not Disturb’ on the outside of the seat.

There is a good sized 18-inch touchscreen with the IFE having a good selection of films, series, games music and reading.  As it is fixed you can watch the screen from gate to gate. Noise-cancelling headphones are provided and stored in a cupboard at the rear of the seat along with a handset for the IFE.  The aircraft is equipped with internet connectivity. Business Class customers get one hour complimentary but can purchase extra packages in advance for an hour (£6.80), 3 hours (£12.90) or whole flight (£21.50). They can also a little be bought onboard from €7.99.

Charging devices is easy with a plug socket by your feet, a USB A & C socket in the cupboard with the headphones and a charging mat built into the side table. I used this to charge my phone and it worked well. 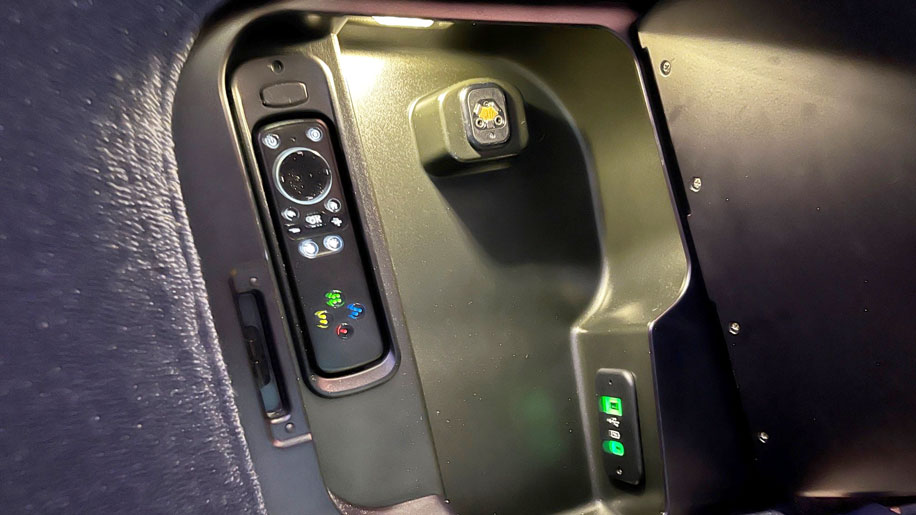 There are 43 seats spread over 2 cabins with rows 1-8 in the first cabin and 9-12 in the second in a 1-2-1 configuration (A-D-H-L).  All seats have aisle access. Avoid row 1 where there are 2 seats (D-H) as this are very close to the toilets.  2A or K are good choices as you are far enough from the galley and toilets but close to the front of the cabin so get a quick service.

When choosing your seat, if leg room is the most important aspect for you, then the front seats have more because they do not have the seat in front of them and so the alcove is wider. If you are travelling with a companion, maybe choose the centre seats as there is a divider that can be lowered. 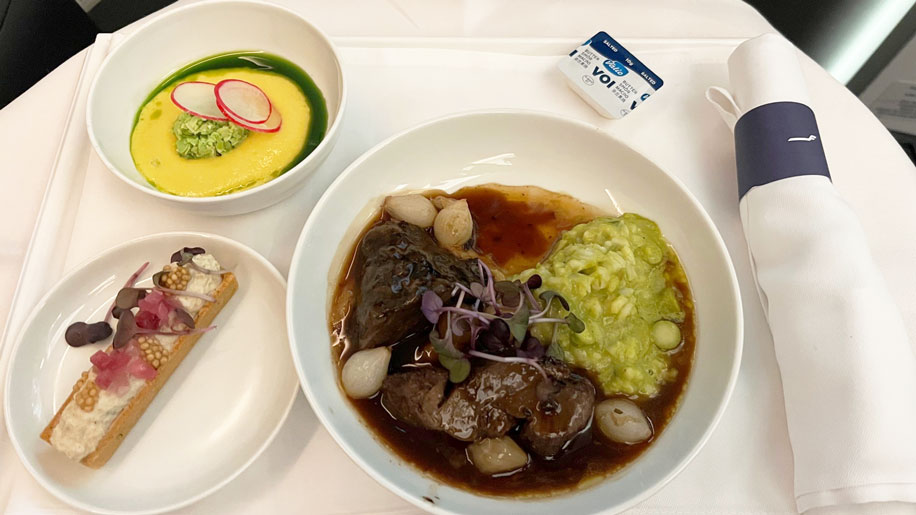 The drink I had ordered earlier arrived just 30 minutes after take-off with a small bowl of smoked almonds. This was followed 30 minutes later with the food. To start there were two small starters.  An interesting corn puree with edamame and fava beans and dill oil and a delicious herb tartlet with shredded chicken and mustard seems.

The main course included a choice of Braised beef cheek with onion puree, asparagus risotto and dark truffle sauce, a lightly smoked rainbow trout with pea puree, summer vegetables and creamy mussel sauce and the vegetarian option of fried wok vegetables, cashew nuts, noodles and coconut sauce. I opted for the beef which was tasty.

There were a selection of three red and three white wines. The reds were Tommasi Poggio al Tufo 2017, Chateau Puybarbe Cotes du Bourg 2016 and Roquette & Cazes 2018. The whites were Errazuriz Aconcagua Costa Sauvignon Blanc 2018, Laboure-Roi Chablis le Beaunois 2018 and Pilliteri Gewurztraminer Riesling 2020. I rarely drink on a plane but for once asked for a glass of the Chablis which was sadly unavailable so went without. 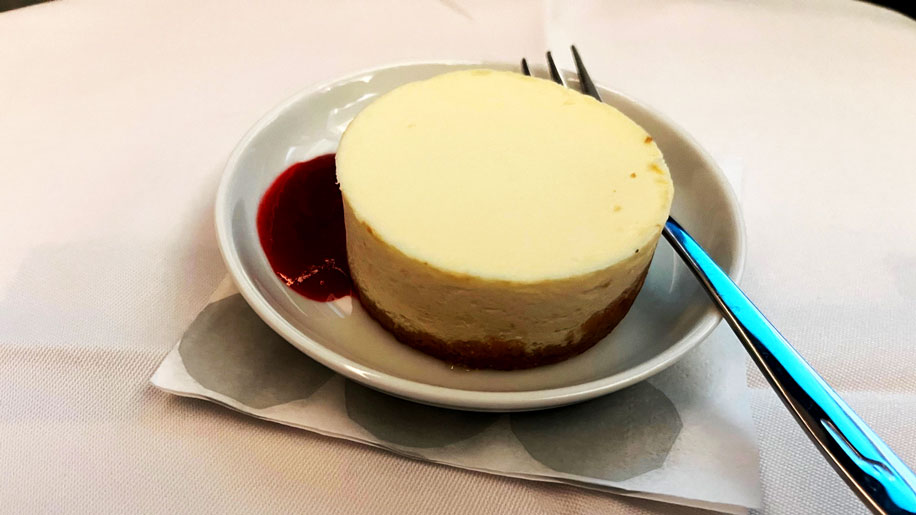 About 1.5 hours into the flight the lights were dimmed so people could sleep.  As they did there was what was billed as an impression of the Northern Lights. The cabin has mood lighting designed in partnership with Jetlite to combat the effects of jetlag.

The TV screen helpfully shows a timeline for the flight including when the meals were to be served. If you happen to be hungry or thirsty during the flight the galley between the two cabins has some snacks which included crisps, peanuts, Haribo, chocolates with some extra water bottles.

The second meal was served about two and a quarter hours before landing.  This included a game meat pie (I would call it a quiche), Skagen salad, cheese and meat, croissant and roll and fresh fruit.  It filled a hole and was a sort of cross between breakfast and lunch. One hour and 20 minutes before landing the crew passed a plate of chocolates around the cabin.

We landed at Changi about 30 minutes late at 1847. I was one of the first of the plane. Immigration was quiet with just 3 people in each queue. Bags were on the belt within a couple of minutes of getting there. 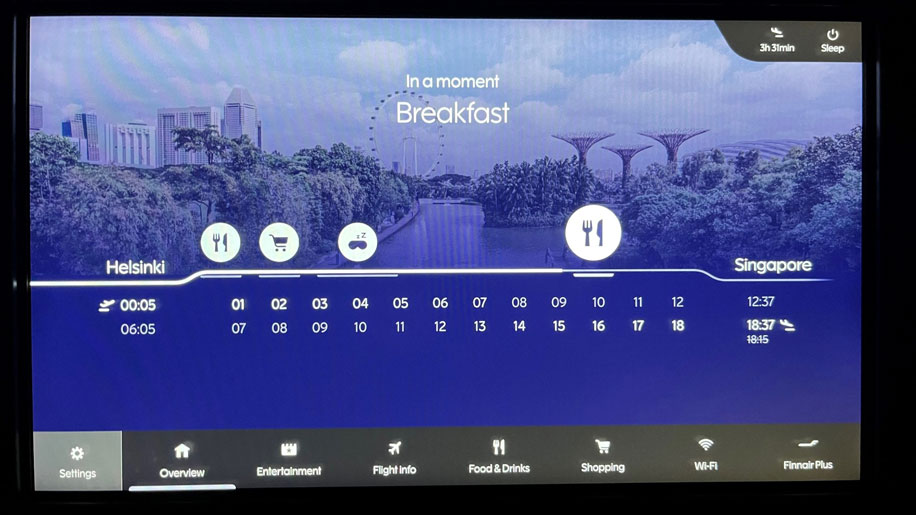 A superb seat. I did not find the lack of recline an issue on this night flight and sat upright in the seat for two periods of 3-4 hours. It was very comfortable to sit, work and sleep and there is a great sense of privacy. As you sleep further down the bed than on most seats older passengers (or those lacking mobility) might find it hard to get out as you can’t just raise the seat and need to wriggle out.

45 inches pitch, the bed at its widest point is over 1m wide but a lot less at the feet. Bed length of 78 inches 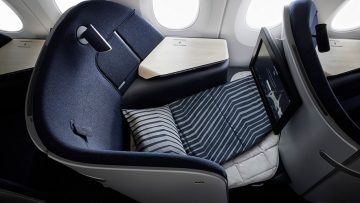