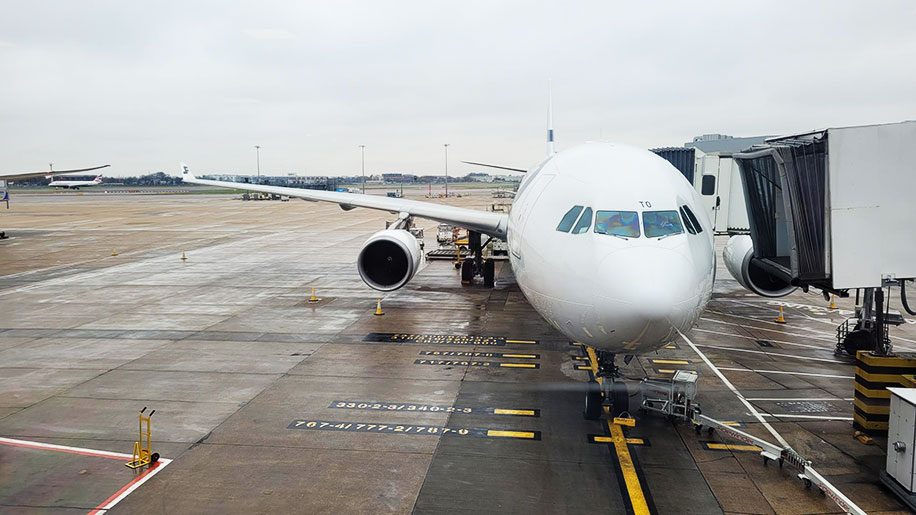 Finnair launched this new long haul business class seat in February and flights on short haul routes began in March with long haul routes beginning on the Helsinki to Singapore route from May.

The new seats will be retrofitted on existing A330 and A350 aircraft, and come ‘line-fit’ on the few remaining orders of A350s from Airbus.

Note that Finnair does not currently have photos of the A330 fitted with the new seat, though there are only very small differences to the configuration of the seat between the aircraft. The main difference is in the number of seats on board, and the fact that on the A350 there are two cabins of business class, while on the A330 there is one.

To see the seat on the A330, see the below video

Finnair check-in as it Zone B in Terminal 3 of London Heathrow. I arrived at 0815 for my 1025 departure on AY1332. There was no queue at the priority check-in and having collected my boarding card I made my way up to Fast Track Security where there was a queue so we were advised by a member of staff to use the normal security, and this took around ten minutes.

Finnair does not have its own lounge at Heathrow and so business class flyers have the choice of the Oneworld Lounges. I chose the Cathay Pacific Lounge, which was, as always, excellent, though very busy, mainly with passengers waiting for their American Airlines’ flights.

Boarding for the flight took place from gate 26. Priority boarding took place without issue and we were onboard by 0940. 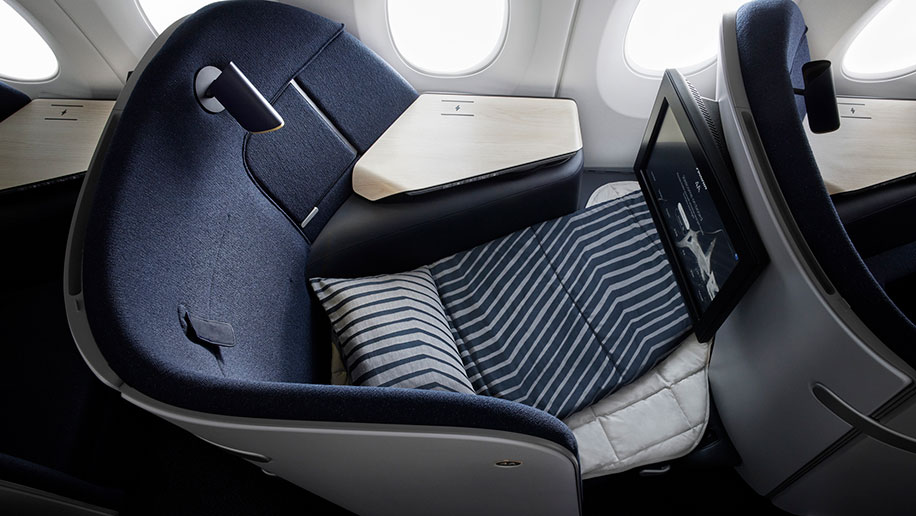 The new seat is a completely different concept from Finnair’s previous two business class seats, which were adapted ‘off the shelf’ seats, firstly from Thompson Aero (the Contour Vantage seat) and then the current Zodiac Cirrus III (Aries) seat design which was first introduced in 2015 (you can read reviewed of it at businesstraveller.com/tried-and-tested-category/airlines/finnair).

The new seat is called Airlounge and will roll out across the carriers’ long haul fleet of A330 and A350 aircraft in a €200-€300 Euro million investment also includes a new premium class seat and improvements to economy class. This new business class seat was originally designed by PriestmanGoode of London and was further developed by Collins Aerospace, with customisation and final design execution by Finnair and its design partner, Tangerine. 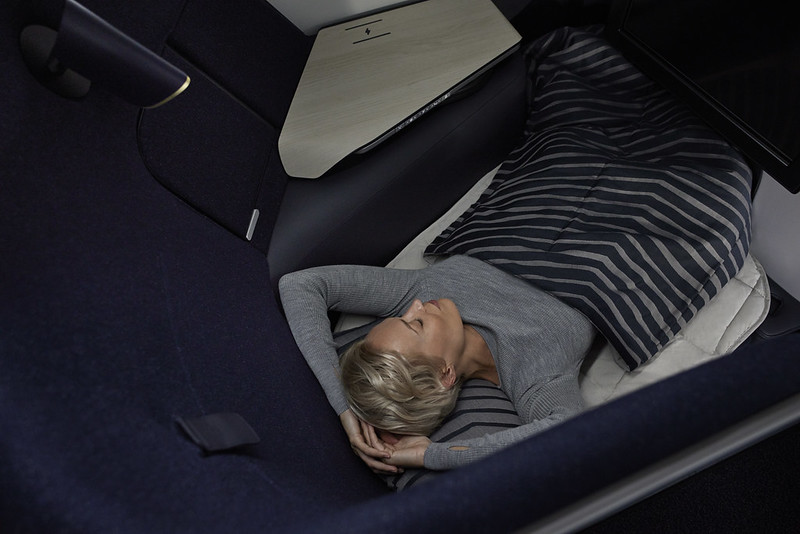 First impressions when approaching from the galley into the business class cabin is that of the back shell of each seat with its curve, and the rounded edges of just about every element of the seat certainly make it friendly both to look at and to use.

When I first saw the design in a hanger in February, David Kondo, Finnair’s head of customer experience product design, told me that Finnair wanted “to rethink business class and create more of a residential environment, emulating the comfort you would expect at home”.

The colour scheme is different from the current business class seating with a darker blue. The airline’s relationship with Finnish brand Marimekko continues with the pillows and a duvet, though this was not present on this short haul flight. The pillow still has a distinctive Maija Isola design print.

The most surprising or innovative aspect of the seat is that it does not recline, though this does not prevent it being easily converted into a full flat bed. There are a range of sitting and sleeping positions, but these are created by altering where you put your feet and legs and using the footrest and leg rest. When you want to sleep you raise both the footrest and leg rest (what the airline calls ‘infill panels’) to create a fully-flat bed.

There is a lever, just out of sight of this picture, which help the two cushions you see (below) rotate upwards, and then a button in the side panel that raises (and lowers) the leg rest). I know this sounds doo, which is why you should reserve judgement (I hope until you’ve watched the video demonstrating it, or better still, tried it out yourself. When it is in bed mode, the seat / bed is very spacious, and you would have no trouble sleeping on your side and then turning over with either knee room or leg room. 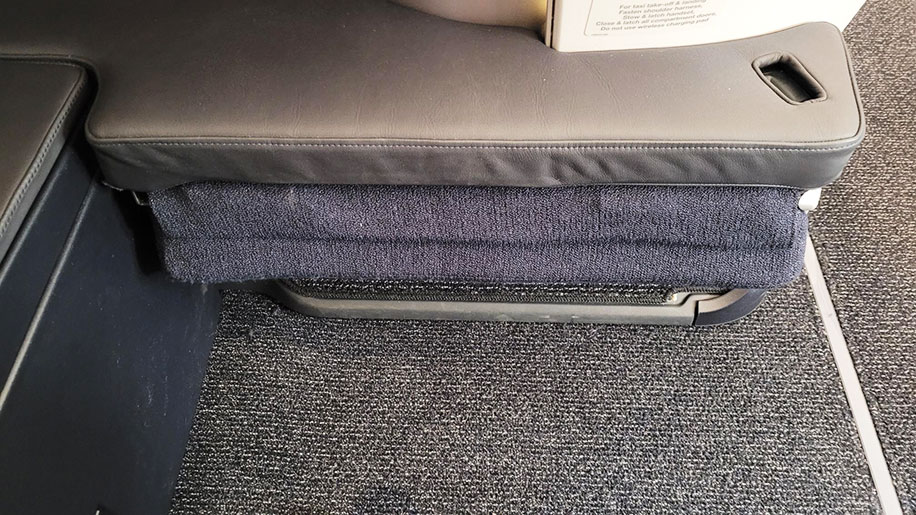 As you’d expect, there’s a supplementary seatbelt for when you are lying down and in the picture above that’s the slot it goes into. For take off and landing you have both a waist belt and a shoulder belt, so it is all very safe and secure.

The seat feels roomy and at its widest is over one metre wide – you can sit cross legged when you get bored. Unlike several of the new generation business class seats it does not have doors, and so instead of terming itself a ‘suite’ has gone for ‘lounge’ instead which is fitting.

Finnair says that the seat ‘takes inspiration from lounge furniture and is designed to maximise customer comfort, space, and freedom to move during a long-haul flight.’ What it manages to do well is give a real sense of privacy without feeling claustrophobic. The way the seats are arranged, and the high shells they are means you don’t accidentally meet other passengers eyes unless you are in the centre seats and lower the central divider.

The spaciousness of the seat hasn’t meant losing storage, which includes a space for personal items and a laptop, which was convenient because it meant I could keep working up until the last moment before we started taxiing for take-off, and then continue once we were fully airborne.

This was a short-haul flight, so rather than sleeping I was more interested in having the space to work, and the side pine topped table has wireless charging for a phone, though it didn’t work particularly well on my table – I actually used my neighbours to charge my phone then used the USB charging in the storage area where the noise cancelling headphones are stowed (there is both USB A and USB C, as well as PC Power closet o the floor for keeping your laptop charged.

The seat also has a certification for pillows and blankets to remain in the footwell area for take-off and landing, as well as shoes under the footrest. There is a smaller table than some business class seats, though it can be manoeuvred into several positions.

All the long-haul aircraft are equipped with internet connectivity, so the carrier’s ‘Nordic Sky’ wifi continues, and the inflight entertainment system has been improved with “a more user-friendly, customised interface” though this wasn’t operating when we visited in the hangar, and there is a wider 18-inch screen. 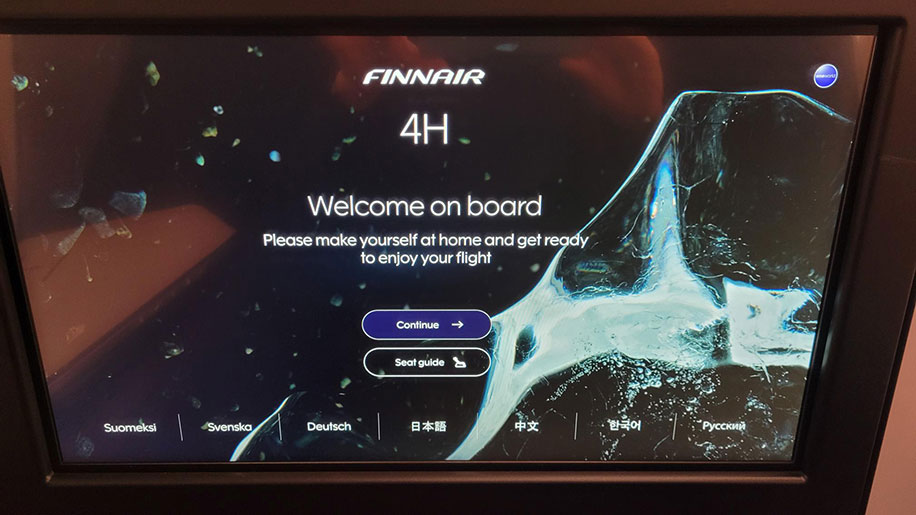 One slight oddity is the absence of a headrest, and a fellow passenger did tell me later that he ended up using the lamp which doubles as a reading light and which is set into the back wall of the seat as an impromptu headrest.

I asked David Kondo about the lack of headrest, and he pointed out that he didn’t think one would have worked with the seat because it would almost dictate a predetermined position in the seat. Referring back to the idea of the seat being sofa-like, that sofa at home doesn’t have a head rest, and many of the new generation business class seats don’t have them – the new ANA ‘The Room’, new Virgin Upper Class, Etihad Business Studio, Singapore A350 all omit the headrest.

It is also worth noting once again that when the full soft product arrives for the long haul flights there will be two pillows, with the smaller one being able to be used as a headrest, if required. David also said if there was feedback that a head rest was required, then they could add more soft product such as the neck pillow that is being supplied in the new premium economy.

The controls for the seat allow raising and lowering the leg rest, releasing the side table for dining or work and also pressing a ‘Do not disturb’ light which turns the seat designator a glowing red on the outside of the seat shell. The new cabin mood lighting has been designed in partnership with Jetlite to combat the effects of jetlag. 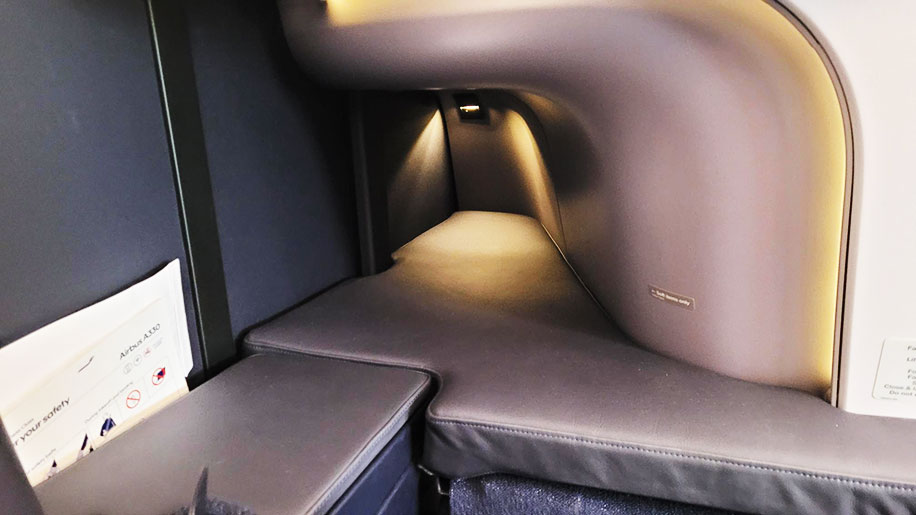 All these seats are excellent. On the A330 there is one business class cabin, running from row 1 through to 7 (so 28 seats) in an A-DH-L configuration. There is a small galley at the front and a large one to the rear and then the new premium economy.

When choosing your seat, if leg room is the most important aspect for you, then the front seats have more because they do not have the seat in front of them and so the alcove is wider. The centre seats are perfect if you are travelling with a companion – if not then the divider is easy to raise and can stay up for take off and landing.

As this was a short haul flight, the new service elements were not present. These are new chinaware from Finnish design house Iittala, with the Kuulas dining collection designed by Harri Koskinen. This new tableware is almost 20 per cent lighter than the previous set. There will also be a new food and drinks service including “an up to six-course meal in modern bistro-style and another lighter meal”. Post-Covid, between meals there’s a new refreshment area in the galley between the two business class cabins.

Instead I worked, wrote this review, and used the free wifi. Some by connecting to the Nordic Sky portal, either thought your laptop of mobile (or tablet). This gives you access to Finnair.com and Finnair services such as destination information, customer care and pre-order shopping. To browse, you can buy full access, but business class and Finnair Plus Gold members get 30 minutes on short haul flights and 60 minutes on long haul flights. I think the reason we got 60 minutes is because this was a long haul aircraft (on a short-haul route).

We arrived on time at Helsinki and were quickly off the aircraft and walking through the extremely impressive new Terminal 2 building.

This is a superb seat. Don’t be put off by the lack of recline. Once you are in the seat it doesn’t alter how easily it converts into a bed, and whether for sitting, working or sleeping it is spacious, private, very comfortable and is great to look at. I look forward to trying it on a long haul flight.