The future of Sheraton 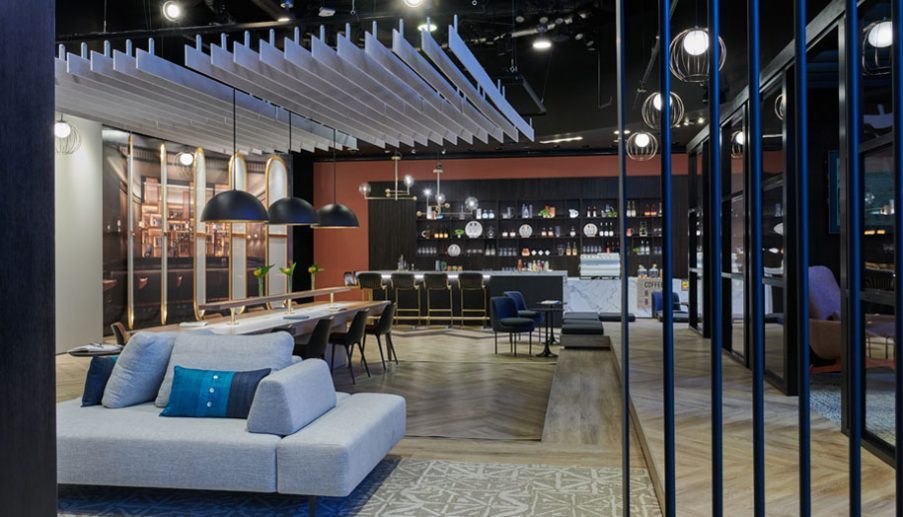 Once owned by ITT (hence the ITT Sheraton many of us remember), the Sheraton brand was acquired in 1988 by Starwood Hotels and Resorts which, in turn, was acquired by Marriott in 2016. Once the merger was completed, one of the tasks was to plan renovations and convince the owners of these Sheraton properties that the investment would be worth making.

“Dusting off an icon,” is how Scott McCoy, Marriott’s Vice President Global Operation puts it. He recognises that there’s a lot of affection felt by travellers not just for the old Starwood brands, but Sheraton in particular. It seems to go back to a slightly simpler time when you might even know the manager of a hotel.

“We want to reinvigorate that hotelier-approach, this decades-old and cherished culture,” McCoy says.

“Sheraton is global, located in primary gateway cities, with 450 hotels in 70 countries. It’s a very prominent brand in so many cities and is full service, fully-scaled and highly regarded. And because of that, it represents something we want to ensure those hotels are returned to, the level of delivery that we know they are capable of.” 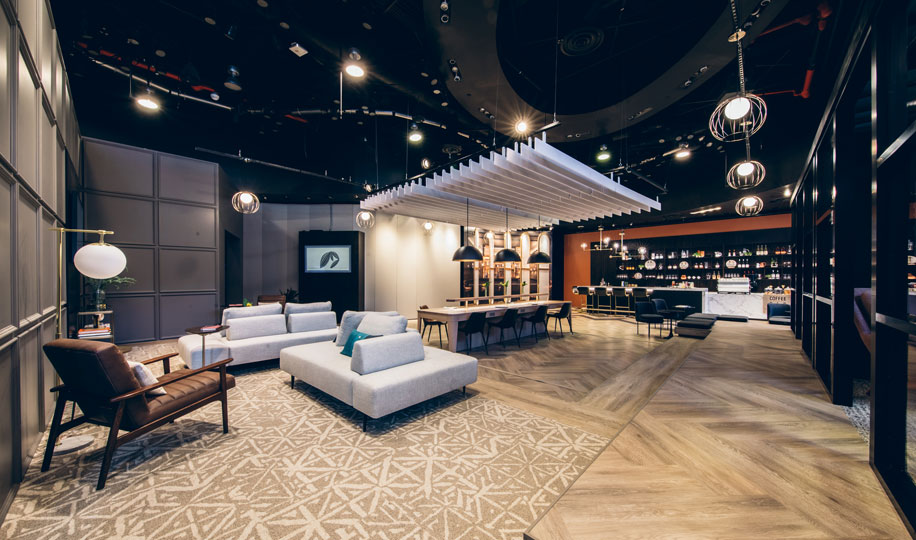 So what changes can we expect? Well, one of the most important targets is the lobby of the hotels, a place that all brands have suddenly become aware are not fit for purpose. Again and again these large spaces in prime real estate positions have a few chairs, lots of space, and no atmosphere. Not only is it a missed opportunity, but it also gives the impression that a hotel is just somewhere to sleep, not to hang out in. And watching guests leave the hotel to get something to eat, or grab a coffee, or have a meeting, or go for a drink means hotels are missing out on all that extra revenue.

“We’d ask them where they were going and they’d say ‘I have to meet a client,’ and if we asked them why they were meeting them somewhere else, they wouldn’t want to say.”

Boettcher is quick to say that there are many fine examples of Sheratons around the world, but that the Sheraton brand “kind of lost its way in certain parts of the world, the US being one of them. Europe is split, we have some amazing ones and some that are struggling a little bit.” 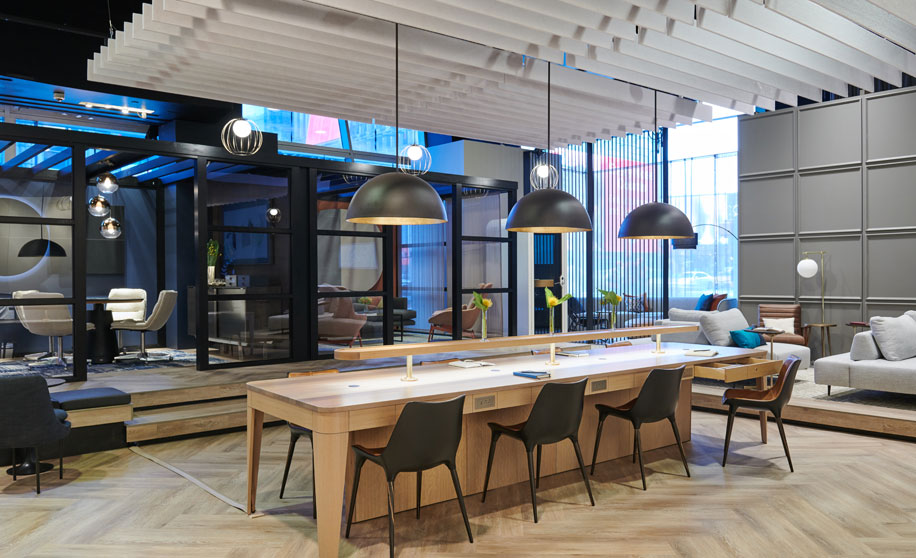 The new aim, therefore, is for Sheraton to “recapture” its reputation as “the world’s gathering place”, taking advantage of the prime location it occupies in many cities.

“The DNA that we want to keep is the sense of community,” says Scott McCoy.

“The Sheraton is the gathering place, the community square for so many of these locations, and where appropriate we want to amplify that.”

It will do this by completely redesigning the lobbies, and incorporating a number of elements to encourage people to linger, eat and drink, hold meetings and then finally, in the evening, spend money at new bars that will be created.

Several new features will be introduced, first of all in 12 Sheratons around the world, including a 1,000-room Sheraton Grand in Phoenix, and these dozen or so hotels will act as a test bed for the rollout of the design worldwide.

The new features include communal tables with lockable drawers for when you want to leave for a while, soundproof phone booths allowing people to make confidential phone calls without being overheard, and glass-sided meeting booths situated in the lobby. 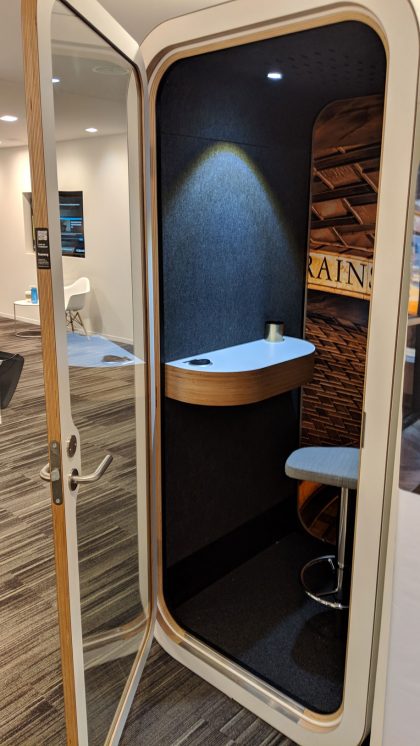 The Sheraton phone booth is a sound-proofed booth which will allow guests to make confidential phone calls in the lobby of Sheraton hotels without being overheard.

The size of the booth means it is unlikely to be used for prolonged periods (it’s quite claustrophobic), but it does mean that rather than having to go back to a hotel bedroom to make a call to family (or a confidential work call), people can stay in the lobby but still speak confidentially.

Perhaps the provision of the phone booths will also encourage those who walk around lobbies shouting into their phones to desist.

A destination bar will also be introduced, serving great cocktails and also locally-sourced drinks in the evening. There will also be the bizarrely-named “coffee bar bar” [sic], where excellent coffee will be served, probably in association with a different premium brand on each continent.

Many of these ideas aren’t new, but are being refined, as this New York Times article explores. Lobbies are the new battleground for hotel brands anxious to remain relevant in the face of competition from everyone from Wework to Starbucks. The communal table (‘Productivity Table’), for instance, is something you’ll see at brands like Ace Hotels, but here the addition of a drawer not only helps demarcate someone’s space, but also allows them to leave behind their laptop and items for a short period of time if they want to go and get something to eat or drink. 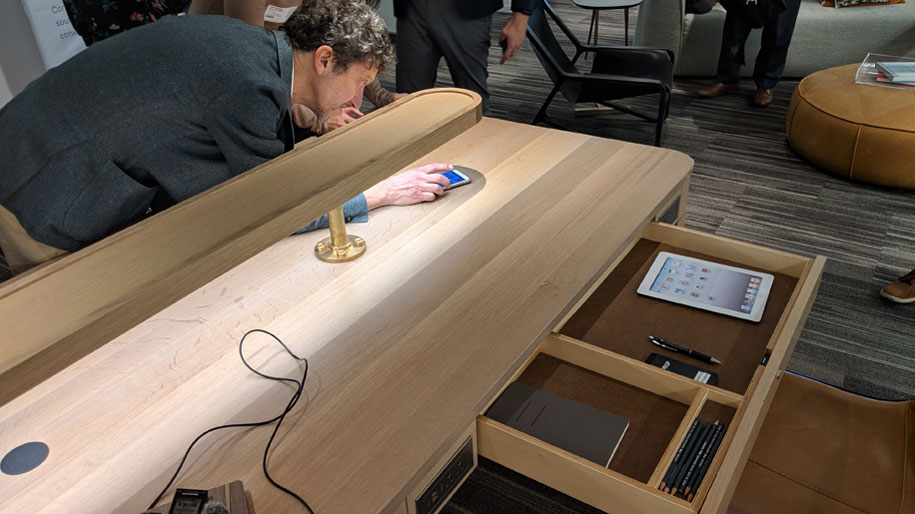 The meeting rooms – called Studios – are designed because people often want to have a meeting, but don’t want to necessarily sit in the basement of the hotel to have it. These studios are small glass rooms with capacity for between two and perhaps eight attendees, with all the technology you might need including Bluetooth speakers for conference calls, and the rate for renting it is all-inclusive. In the evening these become private social spaces which might be given to elite members of the Marriott Bonvoy programme as a perk (as you can tell, Marriott executives are exploring lots of options). 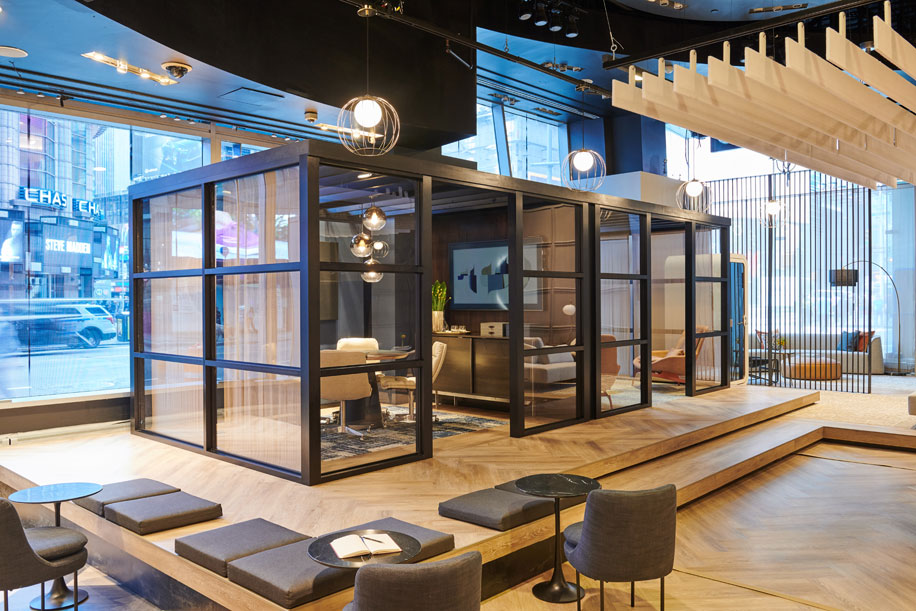 Thought has also gone into the food offering, since Boettcher points out, “it’s difficult to eat a bowl of ramen while trying to work.”

As a response, they have created food that can be eaten “one-handed”, or “eyes-up”, “maintaining a connection with the community”. This will be served from the coffee bar bar, which is “a celebration of the harmony between caffeine and alcohol” (I think Boettcher was joking at that point, although I am partial to espresso martinis, though normally after six o’clock). Licensed to serve alcohol, the coffee bar bar will offer everything from grab-and-go through to counter and table service.

Lastly, the “veiled bar” is the name for that destination bar in the lobby.

“It’s not a speakeasy or behind a red door,” says Boettcher. “You can see it through frosted glass, but during the day it is closed and the space dark, but with the bottles illuminated. That concentrates the activity in the lobby during the day, shrinking the space and create the co-working feeling. Then, when it opens, it allows guests to go to a new environment, but still stay in the hotel.

Who is it aimed at?

So who is all of this new Sheraton aimed at? Well, business travellers. But more specifically, “the Team Player”.

“We did a ton of research and customer interviews, trend analysis, and what we found out is that the target customer is pretty complex,” says Boettcher, “a team player who is about “we” rather than “me”; an ‘intrepreneur’ rather than an entrepreneur. They are highly successful in their careers and they want something from the brand that gives them a consistent experience that allows them to be professional. They are dependable. You can trust these people and they are looking for something to trust.”

Boettcher says that by focusing on the public space Marriott can change the perception of the brand “not just for guests but also for locals. The inspiration for the world’s gathering place is town squares, and those were purpose built, so we wanted to do that same exact thing.”

So how long will it all take?

All the executives are keen to progress the refurbishment of the 450 Sheratons at a quicker rate than the 500 Marriotts have been renovated. This latter process started six years ago and is still ongoing. Though no one wants to put a timescale on it, some 25 per cent are ready to begin the process within two years, and some have already started their room renovations.

As the renovations are rolled out there will be adaptations (“learnings” is the trendy phrase for this), and there are some interesting future ideas, including “Access by Sheraton”, which is a marketing term “built around leveraging technology to make the experience much more seamless”. As well as mobile room-key technology and being able to check-in before you arrive, this would also allow both guests and, potentially, locals to order food and beverages from the hotel’s outlets and pick them up either during their stay or, if passing by the hotel, on their way to work or on their way home.

“You wouldn’t be paying the extra money to Uber Eats to get it delivered, so if you don’t want to order through the server at the property you can order through the app and simply pick it up,” is how Boettcher puts it, saying it is currently in pilot and being tested as a concept.

For regulars at Sheraton properties, the changes to the lobbies may start appearing soon (imminently in the case of the Phoenix property.) Only time will tell how successful the renovations will be, but since every brand from Ibis through to full-service hotels is aiming to transform hotel lobbies, perhaps we’ll be hanging around hotel receptions for more pleasurable reasons than just waiting to check in and check out.

Loading comments...
Read Next
When In Kobe … Stay in a Japanese Ryokan
Read Previous
Hong Kong: Beside the border 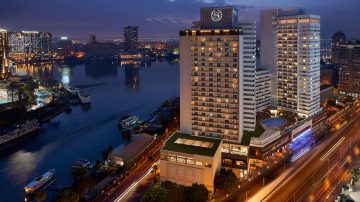 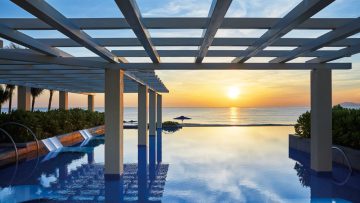