It’s said a week can be considered a long time in aviation but in this case it’s just a few days.

On October 6 we reported on Loganair’s ambitious expansion plans at Edinburgh and Glasgow for summer 2023.

Now today’s Sunday Times reports that Stephen and Peter Bond, who have owned this Scottish airline for 25 years, have put Loganair up for sale.

The carrier’s CEO Jonathan Hinkles has also confirmed the news on his LinkedIn page, stating:

“We shared the news yesterday with our whole team that, after 25 years of involvement in Loganair including the last 10 years as sole owners, our shareholders Stephen and Peter Bond are working to find a new custodian for Scotland’s Airline.

“It’s for the best of reasons – Stephen is now 72 years of age and wishes to step back from day-to-day business. That’s really the beginning, middle and end of the story right there.”

Loganair is a substantial regional operator with no fewer than 42 aircraft serving 80 routes.

At this point readers might ask why UK domestic flying is barely profitable.

Quoted in The Sunday Times consultant and Business Traveller contributor John Strickland said, “I think Loganair has done a good job in finding the right niche in the market and delivering on it.

“The challenge is it’s a low margin business. It has small planes, which are not proportionally smaller on a cost-per-seat-basis.”

Loganair is one of few domestic airlines which is vital for connecting the regions.

It tends to charge above-average fares but in turn it aims to attract the corporate user with use of jet aircraft.

If domestic aviation is unprofitable then why is it that British Airways remains the leading operator ?

It’s quite simple. BA has abandoned all long-haul flying from the regions. The bulk of its domestic network revolves around feeding its London hubs from Manchester, Belfast, Glasgow and Edinburgh whether profitable or not.

It’s worth noting that this decision by the owners of Loganair comes despite the government’s plans to lower the rate of APD from April 2023 for regional flights.

Let us hope the new owners of Loganair will continue to show commitment to corporate travellers. 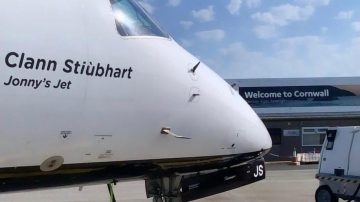