The UK’s economic revival is being hindered by the lack of inbound travel according to the World Travel and Tourism Council (WTTC).

New data collected by travel and analytics firm Forward Keys revealed that airline tickets for international trips out of the UK increased by an average of 24 per cent in the week to July 13 compared to the previous week, with fully vaccinated UK travellers returning to England from “amber list” countries no longer needing to quarantine.

The data also showed that weekly flight tickets for future travel abroad to traditional destinations have exceeded pre-pandemic levels. Greece is the most popular destination, with bookings increasing by 211 per cent compared to 2019, followed closely by the Bahamas (161 per cent), Croatia (107 per cent) and Spain (88 per cent).

The highest week-on-week percentage increases in tickets booked were to Germany, which were up by 113 per cent. This was followed by Croatia (69 per cent), Sweden (68 per cent), Portugal (65 per cent) and Albania (64 per cent),

“The UK’s economic recovery is going to continue to be hampered by the lack of inbound international visitors while UK travellers are leaving the UK in increasing numbers. Whilst staycations are helping boost the economy, it is not nearly enough to replace the £639 million which is being lost every day.

“If the situation continues, the UK will lose out on much needed revenues which international travel provides, benefitting every level of the economy far beyond the Travel & Tourism sector. If every day travel is curbed, more cash-strapped Travel & Tourism businesses face even greater strain pushing them to the brink of bankruptcy. Meanwhile, Europe enjoys the financial benefits of British travellers returning to their markets.”

“It’s reassuring to see the UK issued tickets increase for summer travel, the question remains – will those figures manage to surpass pre-pandemic levels in those destinations?”

There are reports today, however, that show that the UK is planning to reopen for double-vaccinated travellers from both the EU and the United States:

UK to open for double-vaccinated travellers 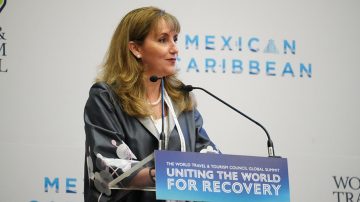