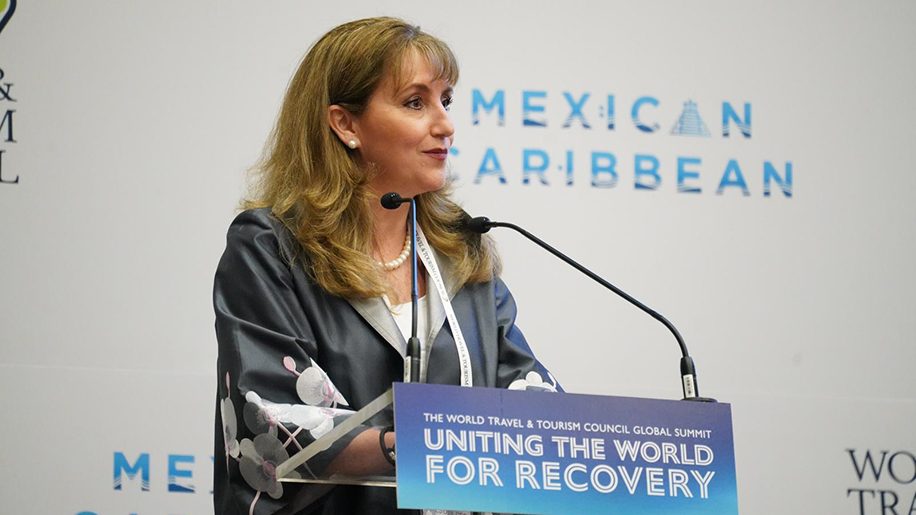 The World Travel and Tourism Council is holding its yearly Global Summit in Cancun, Mexico. Postponed from last October because of the Covid-19 pandemic, it is taking place not just as an attempt to remind governments of the importance of the travel and tourism sector, but also to demonstrate that a large-scale event can take place safely. It certainly has required a new approach to travelling for those attending.

From the UK, although no pre-testing was required, various forms were necessary to enter Mexico and a health declaration form had to be completed either online before departure or on the aircraft on the flight over. Face masks were obligatory, and before being allowed into the hotel complex, rapid, lateral flow antigen testing was conducted, with a green QR code then being generated before you could go into the ‘bubble’ created for the event.

The event is being held at the Moon Palace in Cancun, with attendees spread out among two of the three hotels on the site: Sunrise and the Grand (the third is currently closed). On arrival at the resort, attendees were conducted to the conference centre, where a temperature test was taken on the steps. Then you had to register on the bespoke event testing website, create a profile, and wait a short while before taking an antigen test.

The antigen tests were conducted by private nurses in full hazard suits and masks, who were certainly thorough. I had conducted one of these tests on myself before travelling from the UK, but having both nostrils probed quite so closely had my eyes watering. The advantage is that when done in this way, they are extremely accurate, with 99 per cent specificity. It means that these same tests, are acceptable by the UK government for the flight back into the UK from Mexico, if conducted no more than 72 hours before departure. You could, of course, decide to pay for a PCR test instead, and many hotels are offering these as part of their hotel room packages.

All of this had been stress-tested beforehand, but inevitably there were difficulties. The test results are uploaded to a website and then a link sent to your email address so you can log into that website and view the green QR code, showing it to hotel staff to enter the ‘bubble’ of the hotel and event venue. When the website slowed due to heavy traffic, this then meant people were left in waiting rooms until the problem was resolved.

The Moon Palace is a huge resort complex, even with one of its hotels closed, and there were plenty of guests staying for a break, mostly from the U.S, but they, too, had gone through similar protocols, and although masks were not worn outdoors by everyone, and not often by the pools, they were certainly worn indoors.

It is also true that at every doorway, whether into a restaurant, into another conference room or breakout room or when waiting for a drink, a hotel or even employee would proffer hand gel. Better safe than sorry. Chairs were spaced out with more than a metre between and temperature tests taken at the beginning of the day when first entering event areas and restaurants and bars.

Meeting, under the theme ‘Uniting the World for Recovery’, the Global Summit is described by Gloria Guevara, WTTC President and CEO, as ‘The Davos of travel and tourism”. It certainly attracted some big names. There were 600 attendees, including Global CEOs of Hilton (Chris Nassetta) and Carnival Corporation (Arnold Donald), as well as the Tourism ministers of Spain, Greece, Portugal, Mexico, Honduras and Saudi Arabia among others. There was also the Chairman of Silversea, the CEO of Abercrombie and Kent, CEO of Global Rescue, and the Director General of Airports Council International. Senior executives from Marriott International; IHG Hotels and Resorts; Iberostar; Expedia; Google; American Express; Airbnb; Japan Airlines and TUI also attended. And then there were the 30,000 attending online, including some speakers.

There are, of course, plenty who say we should not be promoting travel and tourism at a time that the Covid pandemic is still so deadly. It certainly needs to be done carefully. The issue, though, is that plans for restarting travel have to be made because the international travel and tourism makes up 10.4 per cent of world GDP. Some 274 million jobs worldwide depend directly on the it with hundreds of millions more being affected indirectly. Without a restart, those jobs and livelihoods are under significant threat. It is, or was, a growth industry. Before the pandemic one in four new jobs being created worldwide were in travel and tourism. Needless to say, those jobs aren’t being created at the moment, and for those hoping to find employment, this is a heavy blow.

The intention of the Global Summit is to bring together the various companies to share their insights as to how travel and tourism can restart. It is also to show how a large scale event can occur even during a pandemic. These events are referred to as hybrid, of course, partly in-person and partly online or with ‘virtual attendees’.

It wasn’t always easy to remember the rules. The seating was socially-distanced and the conference room three storeys high with plenty of air-conditioned air circulating. At the end of the press conference, however, journalists and photographers reverted to old habits when they rushed to the front to get extra quotes and pictures from those who had just finished speaking. Perhaps it would have been wiser to have a question and answer session, after all. 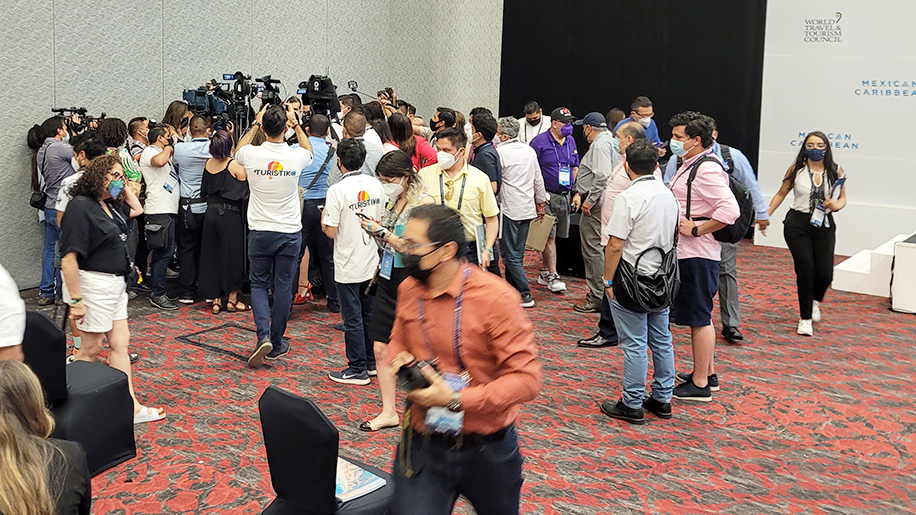 As you might expect for a country with a heavy reliance on tourism, Harry Theocharis, the Greek Tourism Minister, was outspoken about what was necessary to restart travel.

Theocharis said that Greece had written to the President of the European Commission, Ursula von der Leyen, asking for a digital green pass to be established immediately. “The initial reaction was not positive.”

Yet as Theocharis said in his address, “It is common sense. It is not discriminatory. It allows other travel to happen even if you are no vaccinated. It is not infringing on privacy because we can limit the access to the data, and it is not something we can live without if we are not resume international tourism.”

“It is not a ‘nice to have’, it is essential if we are to find our way back to normality.” 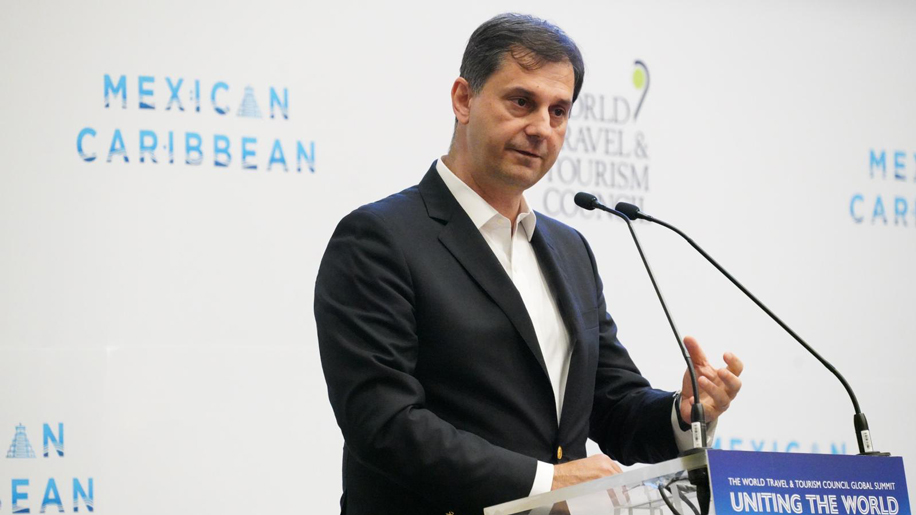 Theocharis said that Greece had determined that a digital green pass would be an essential tool to provide “all the data that governments need to make informed decisions”, that decisions needed to be based on the data we have, and blanket quarantines for returning travel should be removed, since they were killing tourism, and they were looking at sharing best practises and trying to streamline the process, reviewing 22 different applications for vaccine health passes to determine which ones should be used. Finally, Theocharis said that Greece was opening for tourism on May 14 with ‘five levels of safety’ enabling them to “welcome people back”.

Loading comments...
Read Next
A few of our favourite things
Read Previous
The UAE’s best-kept secret