The new Paris-Nice sleeper is not Le Train Bleu – at least not for the time being.

Readers will have seen our piece regarding the relaunch of SNCF’s Paris-Nice overnight train.

I am pleased to tell you that this sleeper train was restored yesterday (Thursday May 20).

This is the European Year of Rail. The EU is encouraging its members to launch more rail services. It also wants to foster competition between the operators.

France’s contribution has been a partial relaunch of its domestic sleeper train network, of which Paris-Nice is the most significant.

For that reason the French prime minister Jean Castex, no less, was amongst the passengers and made an announcement on board.

Sadly for the moment this train is geared more to the needs of leisure rather than business travellers.

Business journalist Fabien Prévots tweeted a picture of the PM preparing his couchette berth for the night.

Seemingly the PM was travelling first class where there are four berths to a compartment.

There are no sleeping compartments on this train.

Adds Mark Smith, “If you want privacy you can book a whole couchette compartment for exclusive private, use.”

However that is the present situation. Things could change in the future should France’s restored overnight trains prove popular.

France currently remains on the Amber List for UK travellers but this situation could change by the summer. 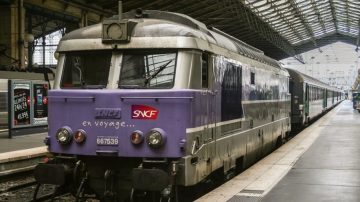