Air France has been granted €7 billion of state aid.

But it comes with conditions. One of which is believed to be the first of its type in Europe if not the world.

I am referring to the restriction whereby Air France must agree not to compete with SNCF’s TGV services where the journey (by TGV) is less than 2.5 hours, reports France’s bfmtv.com.

Therefore Air France would have to limit its domestic flights between Paris (CDG and Orly) for example and Lyon, Bordeaux, Nantes and Rennes.

I say “limit” because Air France could still operate services on such routes provided its customers are connecting to onward destinations.

The idea is to make Air France more environmentally friendly by not offering flights for point-to-point travellers on these short routes.

“I want to reiterate that this support for Air France is not a blank cheque. Air France will have to make efforts [to make changes in the way it operates].

“Air France will have to be more profitable and more competitive. It must become the most environmentally friendly airline. It will have to reduce its CO2 emissions by 50 per cent during the period 2005 to 2030.”

Readers might remember that Paris-Lyon was the first TGV route way back in 1981.

Despite transportation experts claiming the TGV would eliminate air travel on the route there were still (pre-coronavirus) many flights from Lyon to both Paris CDG and Orly. Of course most of the travellers will be making connections but some would not.

Some readers may not like this development. But it must be remembered that Paris CDG already has direct TGV services to regional points in France (see our air-rail feature in the December 2018 issue of Business Traveller) and so Air France is being ‘let off’ lightly.

Finally remember this ruling concerns domestic routes only. It does not cover Paris-London where Eurostar takes little more than two hours. 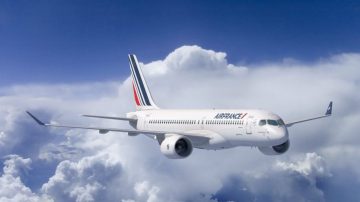 Features
Air France: how to cancel, rebook or get a refund on your flight
26 Mar 2020