Jetblue has finally confirmed plans to launch transatlantic routes to London, with “multiple daily” flights from New York and Boston set to launch in 2021.

There had been speculation for some time that the US low-cost carrier would announce its first transatlantic services, with Jetblue set to operate the routes with Airbus A321LR aircraft featuring “a reimagined version” of its Mint business class product, offering more lie-flat seats than on its current A321s.

The single-aisle aircraft will also feature a new long-haul version of its core (economy) product.

In a statement the airline said:

“Growth into Europe is the next natural step in Jetblue’s focus city expansion strategy, with London being the largest destination not served by JetBlue from both New York and Boston. The new service will strengthen Jetblue’s relevance in its two largest focus cities while also answering calls from loyal business and leisure customers who have, until now, been forced to fly other carriers to and from London.”

Last week Virgin and Delta announced plans to serve London Gatwick from both Boston and New York, starting in 2020. The move was seen by many as a spoiler ahead of Jetblue’s announcement. Norwegian currently offers flights from Gatwick to both Boston and JFK, while British Airways serves the Gatwick-JFK route.

Jetblue said that travellers between the northeast US and London are currently faced with “sky-high fares” in premium cabins, “mediocre service in a market effectively controlled by legacy carriers and their massive joint ventures”, or “a no-frills, bare-bones approach” from low-cost alternatives, which offers “little in the way of complimentary amenities or the kind of service that Jetblue has become famous for in the Americas”.

Jetblue said that “Additional details about specific schedules, when seats will go on sale, as well as more information about transatlantic Mint, Core and much more will be announced in the coming months”.

“Twenty years ago, our founders had a simple formula for choosing a new market – it had to be overpriced, underserved, or both.

“London is the largest metro area Jetblue doesn’t yet serve from both Boston and New York, and we could not be more thrilled to be changing that in the years ahead. The fares being charged today by airlines on these routes, specifically on the premium end, are enough to make you blush.”

“The big airlines will tell you that competition has never been more robust, but the smaller airlines have never found it harder to get access.

“It’s time for regulators here in the US and across Europe to create conditions where smaller carriers and new entrants can thrive, instead of letting the giant airlines get even bigger through joint ventures. Given a chance to compete, Jetblue can have a tremendous effect on lowering fares and stimulating traffic.”

The airline has created an internal team to begin the process for ETOPS certification, which will allow it to operate extended flights over water using two-engine aircraft. The carrier says it will also convert 13 existing orders for A321 aircraft to the LR version to allow it to “tap into new long-haul markets”. 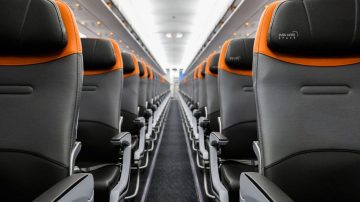