Three unions representing British Airways employees have submitted a joint pay claim which they says is designed to “re-establish [a] connection between financial success and staff reward”.

Pilots’ association BALPA, and unions Unite and GMB released a joint statement saying that “The three unions are working together to seek improvements to pay from January 2019, as well as enhanced profit-sharing arrangements and the introduction of an employee share ownership scheme”.

The unions said that negotiations with the carrier are due to commence this month.

“BA staff made an essential contribution to this success by delivering change and increasing productivity.

“However, British Airways has allowed a culture to develop in which employees are disconnected from the airline’s success, a cause for concern for a world-class, customer service based airline.

“The joint union pay claim is designed to re-establish this connection between financial success and staff reward.”

BA was hit by a series of strikes by Mixed Fleet crew last year over pay, and was forced to wet-lease nine Airbus A320 aircraft from Qatar Airways to help cover operations during the industrial action. 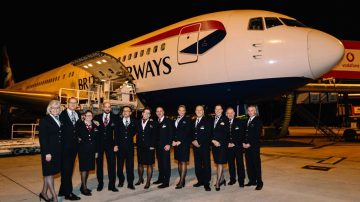