To become profitable and boost aircraft utilisation Garuda has cancelled its expansion plans and will defer deliveries.

Of more concern to premium travellers is the news that Indonesia’s national airline will withdraw its highly praised first class from all routes bar one.

The news regarding first class emerged at a recent trade fair in Tokyo where the airline’s president was heard telling a senior Indonesian minister that “Garuda is cutting back first class service”.

It is also understood that Garuda’s onboard catering and beverage service is also being reduced as it strives to reduce costs.

In fact by the time you read these words Garuda will already have axed first class from two of the three remaining long-haul routes on which it is offered.

Only London retains it – but for how much longer?

I ask, because first class, with its special inventory, catering and so on, is expensive to provide for the few travellers who book it.

I know of no other international airline anywhere who would retain first class for just one route and served a few times a week with two B777-300ER aircraft.

When things are ideal these two B777-300ERs will cope. But as readers know, there is no certainty in aviation.

Flights may get cancelled or delayed for a variety of reasons. If the rostered three-class B777-300ER is unavailable then first class passengers will find themselves downgraded to a two-class (business/economy) aircraft and they will not be happy.

Why is it being retained? The reason, suggests CAPA, is likely because Garuda “is having to maintain a tiny sub-fleet [with first class] for political reasons.”

Travellers hoping to see more of Garuda in Europe and North America will now wait longer.

Garuda had proposed starting service to Moscow and Los Angeles. It also wanted to increase services to Europe by adding Frankfurt and Paris. All this expansion is postponed.

Closer to home its plans for regional expansion are uncertain.

Garuda wants to defer delivery of dozens of new aircraft it has on order.

It appears that Garuda had been too optimistic in its planning. It may never regain the market share it once held thanks to fierce competition from rivals in Asia and the Gulf. 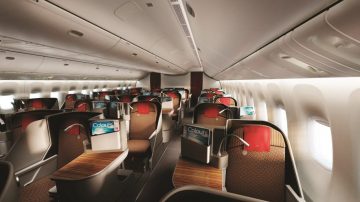