Garuda Indonesia (named after holy Hindu bird the “garuda”) is Indonesia’s national airline. It was founded in 1949. Today, it serves more than 40 domestic destinations and 36 internationally, carries 25 million passengers and is a member of Skyteam.

Garuda previously flew from London to Jakarta via Amsterdam until March 29, 2016, but cut out the Amsterdam touch-down to appeal to business travellers and leisure travellers on their way to Bali. All return flights to London from Jakarta stop off at Singapore.

I had already checked in for my flight to London via Singapore in Bali Denpasar and been issued boarding passes for each leg. My suitcase was through-checked to London so I didn’t need to collect it in Singapore.

I was transferring on to the 1105 flight (GA0086) to London with Garuda Indonesia, which was leaving from Gate B7 in the same terminal (3). It was a 15-minute walk to the gate but was well signposted and easy. There was a security check at the gate (laptops must come out) and no bottles of water can be taken through. I took a seat in the waiting lounge facing the aircraft stands and watched my plane being prepared for the journey.

Boarding was scheduled for 1035 but there was an announcement to say it would begin at 1045. Business class passengers had priority. After having my documents checked, I was able to board the aircraft via an airbridge and find my seat, 11K, in the large business class cabin (there are two separated by a galley).

I was offered champagne, orange juice or water, plus newspapers such as The Sunday Times (Singapore edition) and Time. There was an announcement at 1105 that the flight time to London would be a whopping 15 hours 51 minutes (it actually took about 14 hours, I think). The touchscreen IFE system was turned on after. Business class was not busy – there were only about seven other passengers in my cabin.

There were Clarins amenity kits on every seat (pictured), along with plastic-wrapped coverlets, pillows, headphones and small 330ml bottles of water. The colour scheme of beige and burgundy was a bit drab but the design was good as all seats get direct aisle access. My seat didn’t have as much surface space the one on the outbound flight (8A). 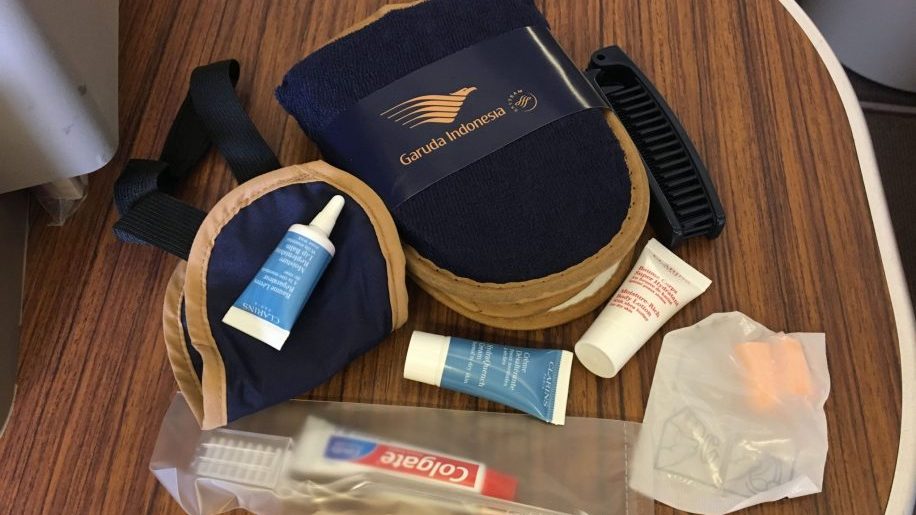 A table folded out of one wall in front and there was a generous TV screen, space to place shoes in a cubbyhole under an ottoman and a handy shelf and storage compartment for personal belongings such as phones. The seat belt was unusual – there was a traditional lap belt plus one that came across the shoulder to clip in at the waist. It seemed far more secure, which I thought was good.

There were reading lights, coat hooks, universal plug sockets and USB ports for every passenger. The business class seat is controlled by a side panel with preset buttons for upright, relax, massage and (fully flat) bed. You could also use other buttons to modify the recline and back support. Menus for food and drink were in a slot near the floor.

Window seats are all for solo travellers, while middle seats are in pairs. All are forward facing. My advice would be to avoid middle seats E-F if you are travelling alone, and seats in row 9, as these are closest to the washrooms. Window seats A and K are better than C and H as are protected from the aisle by tables.

The main business class cabin is from row 9 to 16. Row 8 isn’t the best as it’s near the galley although this didn’t bother me too much. I liked the small size of the forward business class cabin (if you want guaranteed peace, go for window seats in rows 6 and 7) and the extra surface space in 8A. 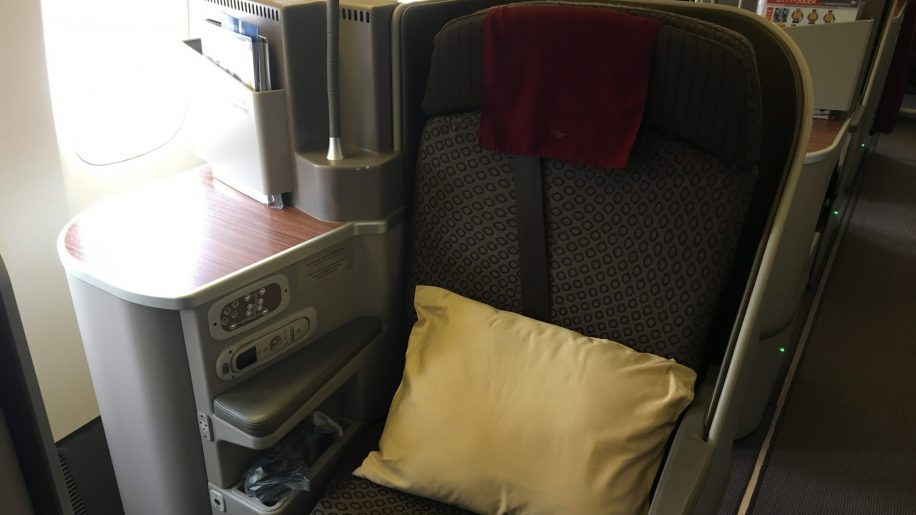 The plane pushed back at about 1115, taking off at 1135. Once cruising, a member of crew came to take drink and meal orders, returning about 15 minutes later with a Diet coke and a tuna mayo canape. My table was set with a white linen cloth and napkin. I started with a delicious cream of tomato and orange soup with two bread rolls, followed by a well-presented portion of ravioli (I would have like a bit more sauce).

What else was on the menu? I liked the balance of options – one specific to the airline’s home country, and several more international crowd-pleasers. Starters were: vegetable salad with fried bean curd and spicy peanut sauce; smoked salmon tartar with fennel, seared scallops, salmon roe and quail egg; and laksa spicy seafood broth with glass noodles, peanut and fried skin tofu. 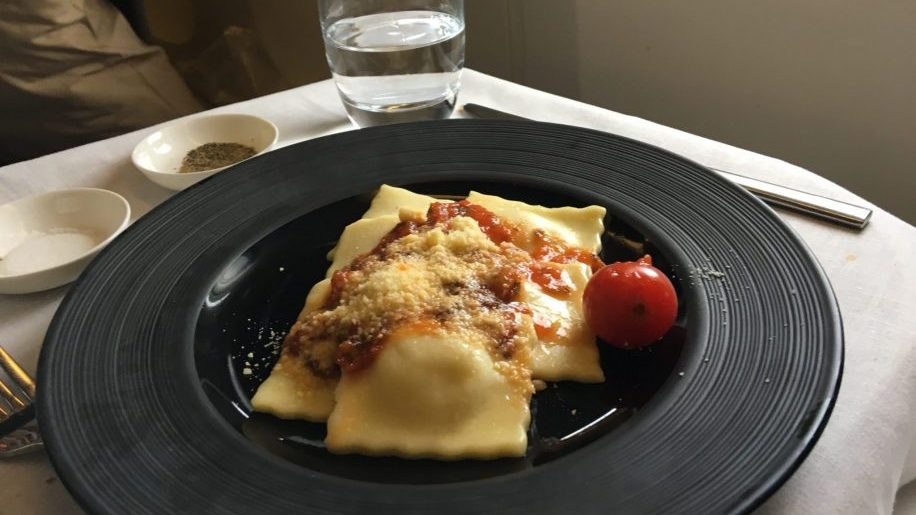 Not having a sweet tooth, I tried the cheese platter but didn’t have the appetite to eat much of it. I wasn’t drinking alcohol on this flight so resisted ordering the Billecart Salmon Brut Rose champagne.

The wine menu featured three whites, three reds, one non-vintage champagne (Billecart Salmon Brut Rose), and one dessert wine (2011 Noble One Botrytis Riverina, South Australia), which won a Business Traveller Cellars in the Sky Award in 2014. I liked how they had added some tasting notes for each one to describe the flavour profile of each.

There was also a modest selection of beers (Bintang, Heineken and Crown lager) and spirits such as Chivas Regal 12-year-old Scotch and Gordon’s gin. Proper Sumatran coffee can be made to order in a variety of ways including espresso and cappuccino, and there were some interesting Indonesian teas such as Oxidised Purple Oolong and organic Rosella tea from Java.

My table was cleared at 1330 and a mug of mint tea delivered, which was refreshing. The cabin was quiet and the crew attentive and smiley. It felt peaceful and relaxed. Stickers on the wall showed there was wifi available (the cheapest package for sending texts was US$5, while the most expensive was US$21.95 for full web use.) There was a decent selection of English-language movies.

Lunch included options such as seared scallops with shaved fennel and pumpkin puree, braised beef soup, roasted pumpkin soup and pan-friend salmon with tomato concasse, angel hair and basil pesto. There were also noodle soups, chocolate, crisps and nuts to sustain you in between.

I managed to get a few hours’ sleep on this long day flight but felt pretty jet-lagged by the time we landed at about 1730 UK time. There were long queues at immigration but they moved quickly and my priority tagged case appeared relatively soon after I emerged into the baggage hall.

This is a very long return journey compared with the outbound sector – not only because you can’t fly direct from Jakarta but because it takes more than 15 hours from Singapore to London. Thankfully, Garuda Indonesia has a very comfortable fully flat business class product that is private and well designed. The wifi, although paid-for, is a bonus and worked well.

PRICE Internet rates for a flexible return midweek flight in business class from London to Jakarta started from £2,316 in March.