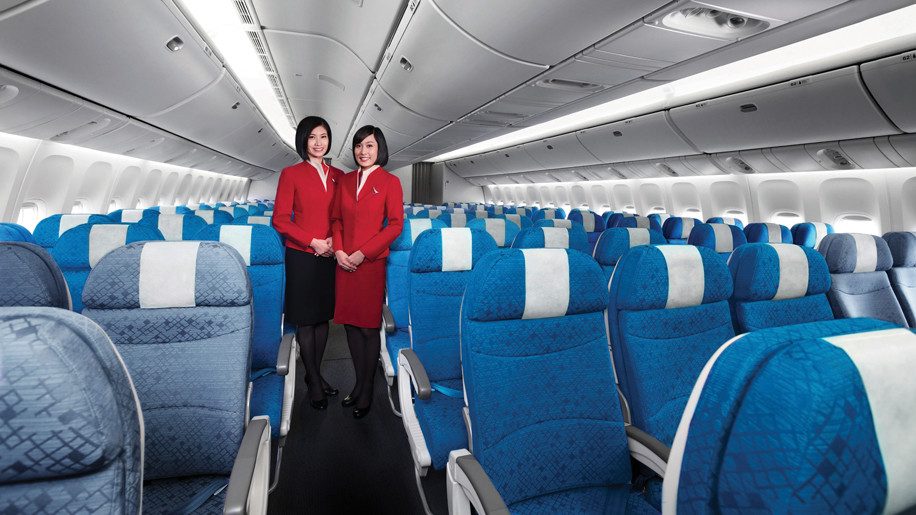 In October of last year, I posed the question “Will Cathay Pacific join the B777 ten-across club?”

My question followed a report in that month’s South China Morning Post.

This revealed that Cathay Pacific had been surveying its passengers for their views on 10-across B777 economy class seating.

Now comes news, courtesy of Runway Girl Network (RGN), that the Hong Kong-based airline is now testing “narrower seating” which would be perfect for a 10-across layout on its B777s.

Cathay Pacific, like all airlines, is under constant pressure to keep operating costs as low as possible.

And recently the situation has become more critical.  Competition from regional and Gulf rivals is growing by the day and this has led to Cathay Pacific posting a substantial fall in profits.

In addition, the security situation in Europe is dissuading cautious Asian visitors from making trips at the present time.

As we reported last month (July 29), a fall in the number of mainland Chinese visitors has prompted China Southern to remove its A380 from Amsterdam in favour of a smaller A330 offering 40 per cent fewer seats.

The B777-300ER as used by Cathay Pacific has an overly spacious cabin compared to some rivals.  And this aircraft plies the airline’s most important routes such as those linking Hong Kong with Europe. North America and Australia.

Take the example of the transpacific Hong Kong-Vancouver route where Cathay Pacific competes directly with Air Canada with both carriers operate the same B777-300ER.

Whereas Air Canada squeezes 450* passengers onto one of its B777-300ERs, Cathay Pacific accommodates only 275.

The wide difference is seat count is partly accounted for by the fact that Cathay Pacific devotes space to first class (whereas Air Canada does not) and partly because Air Canada has already gone 10-across on its B777s.

But having 175 fewer seats to sell, even in economy class, represents potentially a huge revenue loss.

As we have shown many times in Business Traveller, most airlines today are moving to a 10-across (3-4-3) economy layout instead of Boeing’s original 9-across (3-3-3) layout.

For passengers it means narrower seats, narrower aisles and a generally more crowded cabin as Business Traveller readers have testified.

But of course the airlines benefit by gaining a revenue boost.

RGN reports that it’s likely one of the seat types possibly being investigated is Recaro’s CL3710.

Readers may remember that the Recaro CL3710 is the same slimline seat which Dutch airline KLM is now using to convert all its B777s to 10-across in economy as we revealed in Online news (November 14, 2014.)

Although nothing definite has been decided it’s hard to see Cathay Pacific not going down the 10-across route.

Its local rivals in mainland China, Taiwan and Japan (ANA) are all in the process of installing 10-across seating on their B777s.

These are all airlines which compete (indirectly) with Cathay Pacific on service and/or price on routings between Hong Kong, Europe, North America and Australasia.

While many rivals in the latter regions have already configured their B777s 10-across in economy.

Some rivals with 9-across B777 seating continue to be British Airways, Singapore Airlines and Thai Airways.  But for how much longer ?