Qantas has announced it will be collaborating with online accommodation marketplace Airbnb to offer Qantas Frequent Flyer members the ability to earn Qantas Points. The partnership is the first time the online company has collaborated with an airline to reward frequent flyers.

Loyalty members will receive one Qantas Point for every A$1 (US$0.77) they spend on accommodation when they book Airbnb lodgings through the airline’s website. According to the airline, the partnership is part of a wider effort to collaborate with innovative digital and technology businesses.

“The way people around the world plan, book and experience travel is changing rapidly with the digital revolution,” said Alan Joyce, Qantas’s CEO. “We know many of our customers are just as likely to arrange an Airbnb as they are to book a hotel, and we wanted to recognise and reward them for that. From creating business class in the 1970s to introducing mobile technology to transform the check-in process in recent years, Qantas has always looked for ways to reinvent airline travel – just like Airbnb has done for accommodation.”

As part of the collaboration, Qantas Frequent Flyer members have the chance of winning four return business class tickets to San Francisco from the winner’s closest port in Australia when they book an Airbnb via Qantas’s website by the end of October 2016. The winner will also receive Qantas First Lounge access in Sydney, five nights’ Airbnb accommodation in San Francisco to the value of A$5,000 (US$3,837), a total of A$4,000 (US$3,070) in spending money loaded onto a Qantas Cash card, and return transfers to and from San Francisco Airport.

“People around the world are experiencing a different way to travel through Airbnb,” said Brian Chesky, the company’s CEO and co-founder. “We’re focused on connecting people with the hospitality of locals, welcoming travellers into their communities so they can truly belong anywhere.” 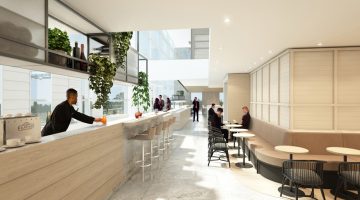