IHG to introduce wellness-focused Even brand to Australasia

Intercontinental Hotels Group (IHG) has announced plans to introduce its wellness-focused business and lifestyle brand, Even, to the Australasian market with plans for an estimated ten to 15 new properties expected to be opened in the coming years. The expansion will mark the first region the brand will move into outside of the US.

Precise numbers, opening dates and specific locations have yet to be confirmed by the hotel group. Speaking at a media roundtable today at the Hotel Investment Conference Asia Pacific (HICAP) in Hong Kong, Jan Smits, CEO AMEA for IHG said that key cities such as Melbourne and Sydney will be preferred destinations for the brand’s initial launch into the Australasian market, with the east coast of Australia being the early focus. He added that properties are anticipated to offer approximately 200 rooms each.

According to Alan Watts, COO AMEA for IHG: “The research we originally did in the US showed that the wellness economy sits at around US$3 trillion globally, and what the size of that wellness economy is in different markets. In Australia, US$5 billion is spent on wellness-related products and travel throughout the year.”

The Even brand is designed to cater to business travellers who value wellness while on a work-oriented trip and who often find exercise routines and diets difficult to maintain on the road.

“When we talk to our customers, one of the things they say is ‘I’m interested in wellness, I have a routine’, and for many executives that doesn’t mean pumping iron in the gym, it means they’re conscious about their sleep, diet, and the amount of time they’re on the road,” said Watts.

Smits added: “If you’re a regular traveller, the hardest thing is to stay on your routine of exercise and eating healthily. Being able to do that that in an environment that is linked around sleep, having the right meals and being able to work out… will really resonate with the Australia and New Zealand market.”

Even hotels are typically situated in city centres rather than resort locations in order to cater to corporate travellers, and offer healthy food choices, natural spaces, and best-in-class fitness experience. The brand also seeks to provide guests with assistance from wellness-savvy staff, and aims to attract experienced wellness professionals to work at the hotels as opposed to just training its hospitality staff in health and wellness.

While IHG will be looking to drive the expansion of its Even brand in Australasia over the coming years, as yet the company has no plans to grow the brand in other Asia-Pacific destinations for the foreseeable future, according to Smits. That said, US-based Kimpton Hotels & Restaurants – which was acquired by IHG in 2015 – will be looking to grow in the Asia-Pacific region over the next couple of years. Key locations for Kimpton’s Asia-Pacific debut include Hong Kong, Macau, Tokyo, Singapore and Bangkok.

The Even brand first opened in 2012 and today has a total of seven hotels with ten more in the pipeline. Meanwhile Kimpton has a total of 65 hotels in North America. 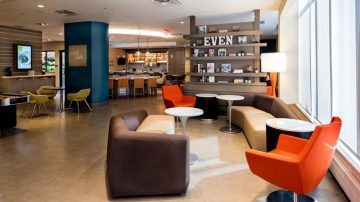