Virgin Atlantic launched a daily nonstop service to Detroit from London Heathrow on June 1. It is normally operated by a three-class A330-300 but as this was a special celebratory service, Virgin laid on a Dreamliner. (The first B787-9 was delivered to the carrier in October.)

Outbound service VS107 departs LHR at 1010, landing in Detroit at 1315, while return service VS108 leaves Detroit at 1750 and arrives in London at 0625 the next day. Virgin is the only British airline flying direct to Motor City.

I arrived at London Heathrow’s Terminal 3 at 0820, with just under two hours until my flight. I headed to Zone A where Virgin’s check-in desks are – there was no queue so I was quickly issued a boarding pass.

I then took the lift to the left up to the Virgin Upper Class wing, which is accessed through a frosted glass door unlocked with a boarding pass scanner. Here it was an oasis of calm, with hardly anyone else around except for a couple of smiling members of staff to guide the way.

At security, laptops and liquids came out (some of my belongings were given an additional swab test) but I was airside by 0830.

The Virgin Atlantic lounge (H) is a five-minute walk away through duty-free, up a flight of stairs or via another lift. Boarding was due to start at 0920 so I had a bit of time for an à la carte breakfast at the sit-down dining area. I chose a spot at the counter, and ordered a cappuccino and eggs Florentine. The lounge was very busy but it didn’t take long to be served, and while I was waiting I was offered pastries, cocktails and mini sausage sandwiches (a special welcome for those on the celebratory flight). There was also a tempting buffet with smoked salmon, fresh bread, fruit and yoghurt. At 0845, Richard Branson entered the premises and was ushered through after stopping for photographs.

The expansive lounge has a great range of facilities – from a shoe shine station, pool table and bar, to a salon and spa. Plenty of magazines and newspapers were available, along with free wifi. Virgin recently unveiled its tenth Clubhouse in Los Angeles – you can read a review of it here.

At 0910 the gate (16) opened for boarding. I left the lounge at 0915 to walk down there, which didn’t take more than five minutes. There was a separate lane for Upper Class passengers, and I was told to take entrance A through the airbridge.

On arrival at the plane, I was greeted by warm, friendly crew and directed to my seat (7G, in the middle of the twin-aisle aircraft). It was a pleasant surprise to find I was on the Dreamliner as Virgin normally operates an A330 on the route. Once my bags were stowed in the overhead locker, I was offered a glass of water Meonhill NV English sparkling wine from Hambledon Vineyards in Hampshire (Dreamliners only). (Other flights serve Gardet Brut Premier Cru champagne.)

Menus were handed out at 0940, with orders for food and drink to be taken once in the air.

Virgin’s Dreamliner is configured for 264 passengers, with 31 fully flat business seats, 35 in premium economy and 198 in economy. The Upper Class product on the three-class B787-9 is Virgin’s newest.

Configured 1-1-1, it occupies rows one to 11 (up to nine in the central set of seats) and is arranged in a herringbone formation, with every seat having direct aisle access and flipping over to create a fully-flat bed. However, window seats face inwards at an angle, meaning you having to turn right around to look out. The cabin looks contemporary and stylish, with mood lighting and electro-chromatic windows that gradually turn dark blue at the touch of a button to block out light. (This is actually very effective.) The overhead bins above all seats were spacious.

As I wrote in a previous review: “The cabin combines features from both the older and newer versions of Virgin’s existing Upper Class, with alterations to the layout, improved technology and minor aesthetic tweaks. The moulded shell surround is more like the earlier incarnation, with no see-through panelling.

“The cutting-edge Panasonic Avionics in-flight entertainment (IFE) system comprises an 11-inch touchscreen monitor and a remote control that can also be used to watch films on – there is a selection of 60 movies and a seat chat function. A universal plug socket, USB port and noise-cancelling headphones are also provided. Wifi for the duration of the flight costs £14.99.”

A white cotton sheet, pillow and cover are kept behind the seats and there are compartments and shelves to stow personal items and magazines. Noise-cancelling headphones are provided, along with a bottle of water and an amenity kit containing a toothbrush/paste, eyemask, pen, socks, lipbalm, tissues and earplugs.

Large tables pop out from the seat unit and create a nice large, solid surface for working at eating on. The newly designed bar between business and premium economy has four fixed stools and a perch along the bulkhead beneath a 24-inch touchscreen monitor.

Seats in row one face the galley at the front, so may suffer some disturbance. I’d also avoid sitting in seats closest to the bar – 11A, K, 10A, K, and 9G. All other seats are good options and provide direct aisle access. Sitting in A seats feel most private as the aisle is flanked by a wall that forms the backs of G seats (sitting in G or K means you are facing the feet of other passengers as seats are positioned diagonally, not forwards).

As this was not a normal flight and there was going to be some “entertainment” on board, there was a short delay to take-off, although we pushed back from the gate on time at 1010. The plane took off at 1040 and, once cruising, a drinks service began and lunch requests noted down.

There were three starters to choose from, served with a choice of three different types of warm bread roll: pea and mint soup; warm chicken satay with a spicy cashew sauce; and buffalo mozzarella and Roma tomatoes drizzled with olive oil and balsamic vinegar, and garnished with micro basil leaves and sweet pepper berries. I had the last, which was modest in size but delicious and artfully presented. The sweet pepper berries were a stroke of genius. TV chef Lorraine Pascal works with Virgin on designing on-board meals across the cabins. On this flight, her Upper Class main dish was chilled Thai beef sirloin salad topped with cashews and a chilli and lime dressing.

I was impressed by the presentation and freshness of the food, and loved the brioche bread and butter syrup pudding with cream for dessert, which was hot and scrumptious. The other dessert was chocolate torte with a crisp roasted pistachio and pine kernel base, rhubarb and red currant.

I forwent the cheese trolley (French brie, Stilton and Applewood farmhouse Cheddar) served with red grapes, chutney and Port, but later regretted it as it looked so good. For those peckish later on, there were cold charcuterie plates, and warm vegetable pakora and samosas that could also be eaten at the bar. Self-serviced snacks included Tyrell’s crisps, fruit, and Green and Black’s chocolate.

Sourced by Berry Bros, there were three white wines and three reds available:

I watched a couple of films during the flight – there was a great selection. Picture quality was good but I did have a minor problem at one stage with the IFE system turning to sleep mode every five minutes so it had to be reset. It seemed to sort the glitch out though.

Service from the crew was top class – they looked well put together, happy and were extremely quick to respond to requests. Everyone was very well looked after – but of course with Branson on board (in premium economy) that is what you’d expect.

For most of the flight there were a lot of people at the bar, where cocktails made, and at one point the cast of Motown the Musical sang and danced their way down the aisles. The person next to me woke up very flustered, not knowing what on Earth was going on. As I mentioned, this was not a normal flight.

As this was a state-of-the-art Dreamliner, the cabin was illuminated with coloured pink, purple and orange mood lighting. I definitely felt the air was less dry than on conventional planes, which was a plus. The toilets were alongside the galley between Upper Class and premium economy, with two larger ones for business class passengers. Afternoon tea was served at 1630, with three tiers of sandwiches, a macaroon, mini lemon cake and scone with jam and cream. A choice of hot mugs of tea or coffee came with it. The aircraft started making its descent at about 1720, with hot towels and Love Heart sweets handed around at 1745 when the seatbelt signs were turned on.

The plane touched down in Detroit at 1815 (1315 local time) and taxied to the stand. As Richard Branson was on board and he needed to do a photo shoot on the tarmac, there was some delay in disembarking. Immigration was relatively quick (about 15 minutes), with fingerprints taken, documentation checked and customs forms handed over. As I was travelling with hand-luggage only, I was able to go straight into arrivals.

Virgin has done a great job of Upper Class on the Dreamliner – the cabin looks ultra-trendy with mood lighting and a slick bar. Every passenger has direct aisle access (although not everyone will like not having a proper view from window seats), and service and food was excellent. Travellers must note, however, that the new Detroit route is normally served by an A330-300. 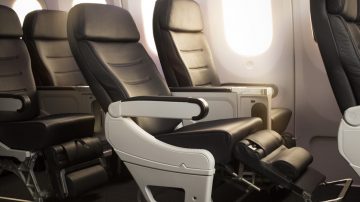