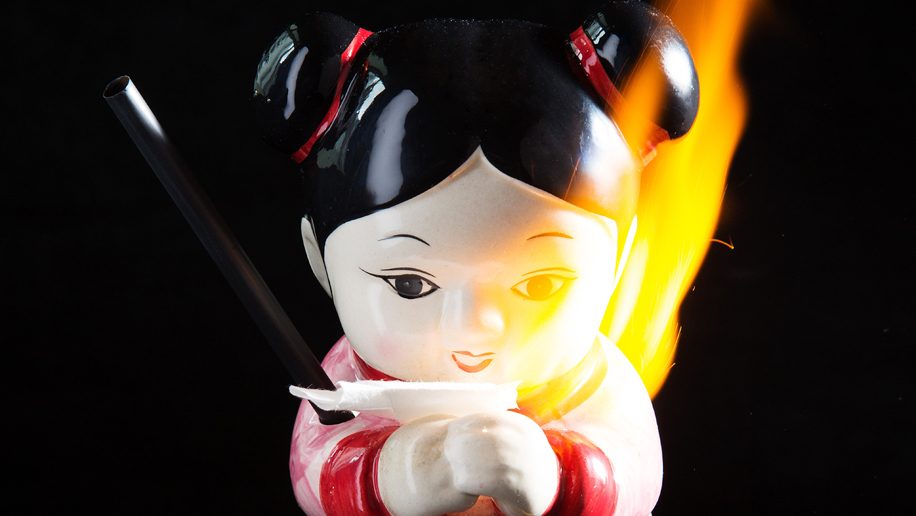 Opened in summer 2017, Fang Fang is a sleek, sophisticated venue with modern Chinese flair in both design and cuisine and influences from surrounding Asian regions. Like other Hong Kong restaurants, a back-story has been created about Fang Fang: a Shanghainese opera singer, who left to travel the world. The glamorous undertones of this fictional character seep through the décor and the food, while a live house band nods to Fang Fang’s musical roots.

The menu of contemporary Asian cuisine is driven by head chef Kent Lee, the former executive chef of Michelin-starred Hakkasan, who has cooked for the likes of President Obama. Meanwhile award-winning bartender Gagan Gurung, formerly at Zuma, is in charge of the bar’s innovative mixology.

Conveniently located on the 8/F of LKF Tower, the restaurant is ideally situated near the CBD and in the heart of the Central entertainment district. 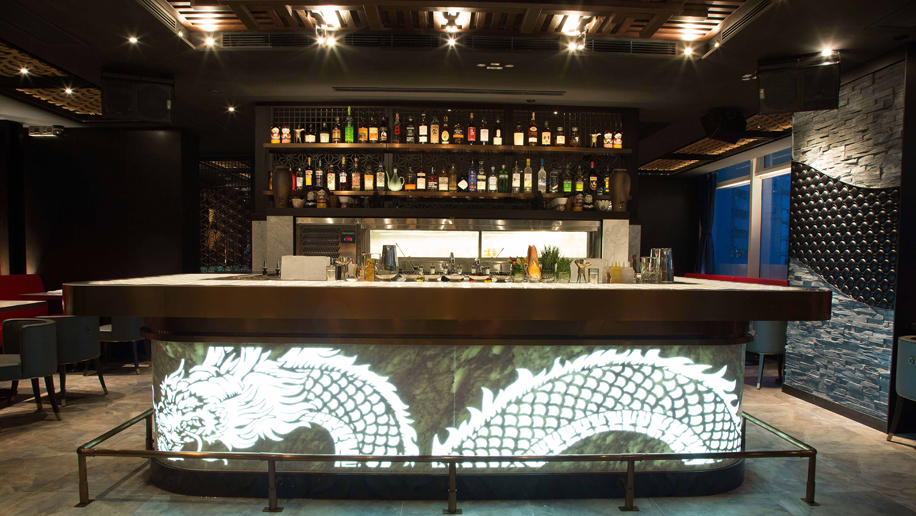 Fang Fang is split into two halves: first, a bustling bar with plenty of casual seating, and behind, a glamorous restaurant with live music stage. After emerging from the lift, diners are greeted at a well-manned reception desk before being shown through.

The whole venue is cast in moody shadows (though spotlights ensure diners can see what’s on their plate) with black “dragonscale” walls and dark oriental latticework screens to create more private areas. Asian influences range from subtle lion door knockers adorning the leather armchairs to the ostentatious golden dragon carved into the bar. 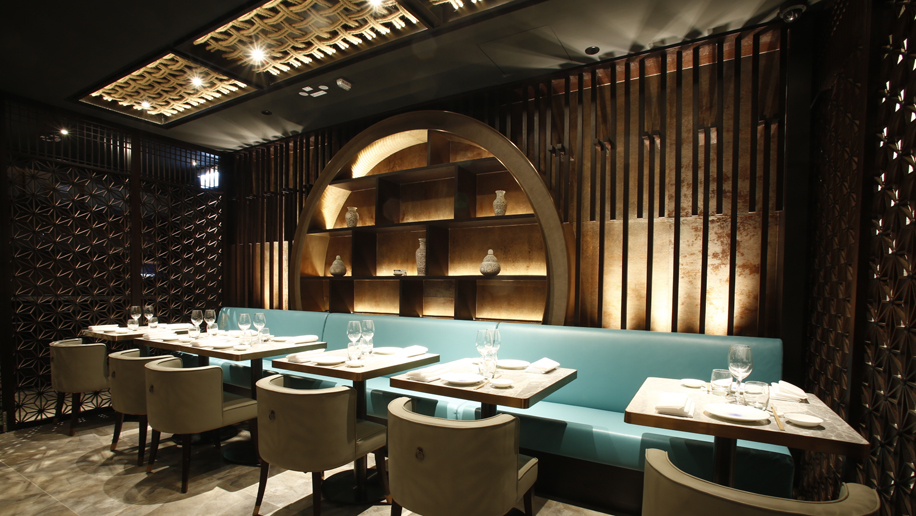 The restaurant side offers a mixture of banquette seating and leather armchairs (though stylish, my dining companion found the back support to be lacking). There is plenty of space between the marble-topped tables, which helps to create a feeling of exclusivity.

The house band, starring Canadian Wendy Robin, play five nights a week (Tuesday to Saturday), creating a fun, lively environment. Even with virtually “front row” seats, the sound was not overpowering and we were able to both enjoy the music and easily have a conversation. 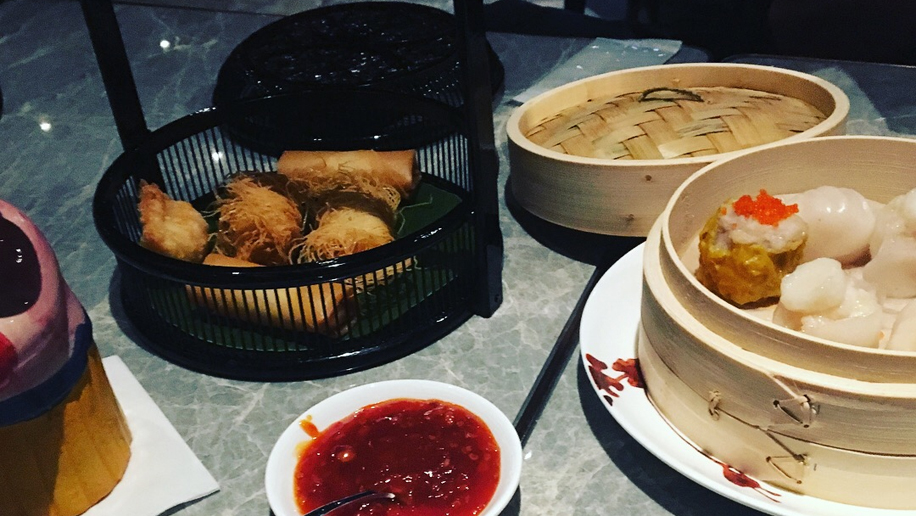 The newly launched dim sum selection is a welcome addition: freshly prepared each day with little to no msg. Highlights include the crisp, garlicky spring rolls as well as the scallop and prawn dumplings and succulent siu mai.

These were served alongside a wasabi mayonnaise and chilli dip – though, while most dim sum may require the help of a sauce, these were delicious by themselves.

We also quickly realised that presentation is a key part of the dining experience at Fang Fang, with some of our dim sum arriving in a traditional basket and others in an elegant oriental container. 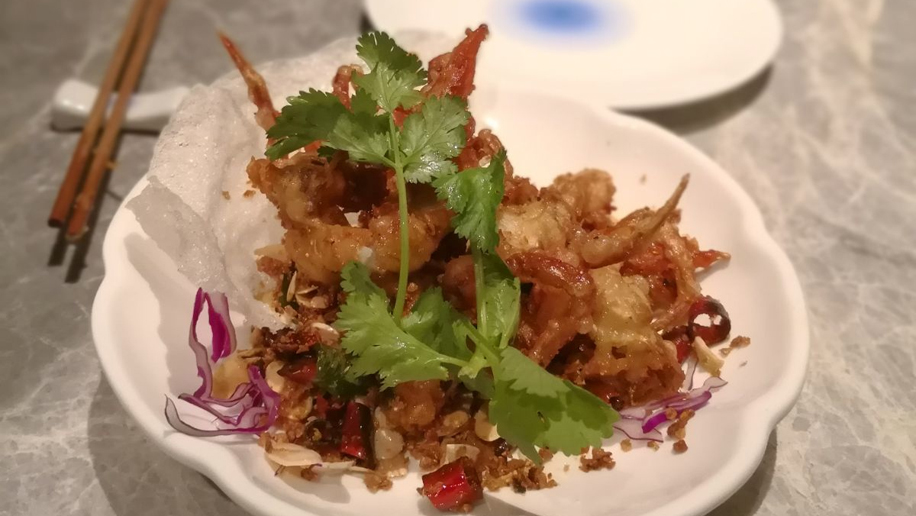 To maximise flavour options, we selected a number of dishes from the “small bites” to share. First we tried the soft shell crab (HK$165/US$21), mixed with an assortment of flavourings including five spice, chilli, curry powder and almond flakes for a powerful punch of flavour. The batter was light and delicate, and the saltiness of the crab really stood out. 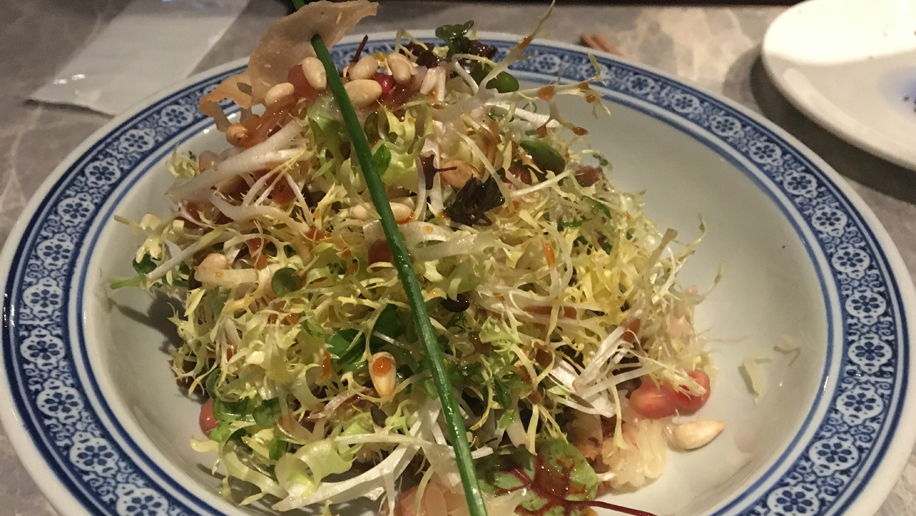 We smelt the next dish before we saw it: posh duck salad (HK$198/US$25) with a generous helping of aromatic truffle oil and plum dressing mixed through with pomelo and pine nuts. The duck itself was cooked to perfection, succulent and falling apart at the touch of a fork, and the overall flavour profile of this dish was sublime. 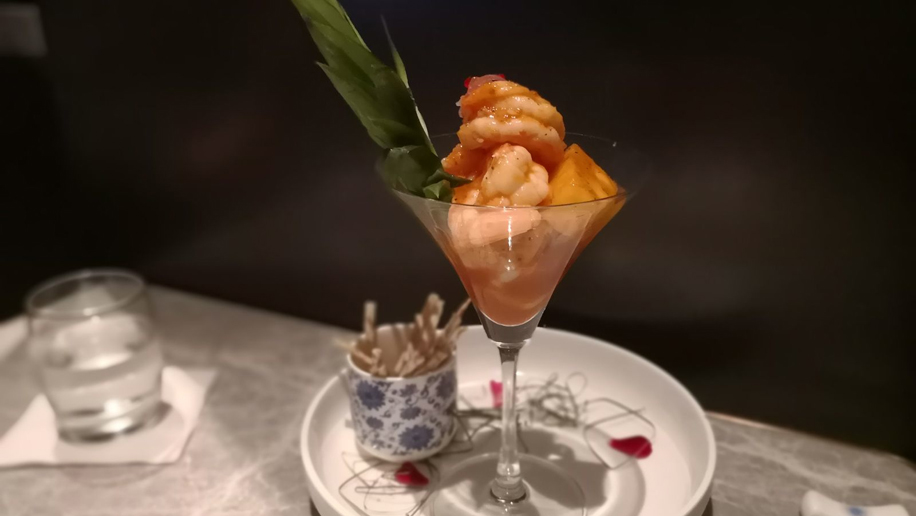 The prawns with Thai dressing (HK$125/US$16) is a quirky take on a prawn cocktail. The large juicy king prawns were served cold, with a fresh marinade of fragrant Thai herbs. This was served in a martini glass with chunks of juicy pineapple, and taro breadsticks on the side. 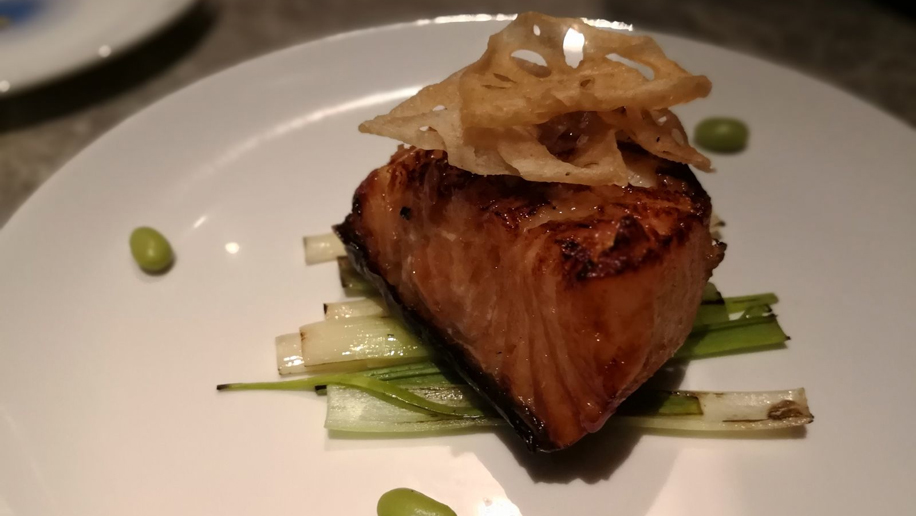 From the seafood section of the menu, we sampled the Forest honey grilled Chilean seabass served with lotus crisps and edamame (HK$350/US$45). Again, the fish was perfectly cooked with springy, moist flesh and a caramelised skin. The sweetness of the honey was delicious, though the permeation throughout the fish was a little inconsistent. 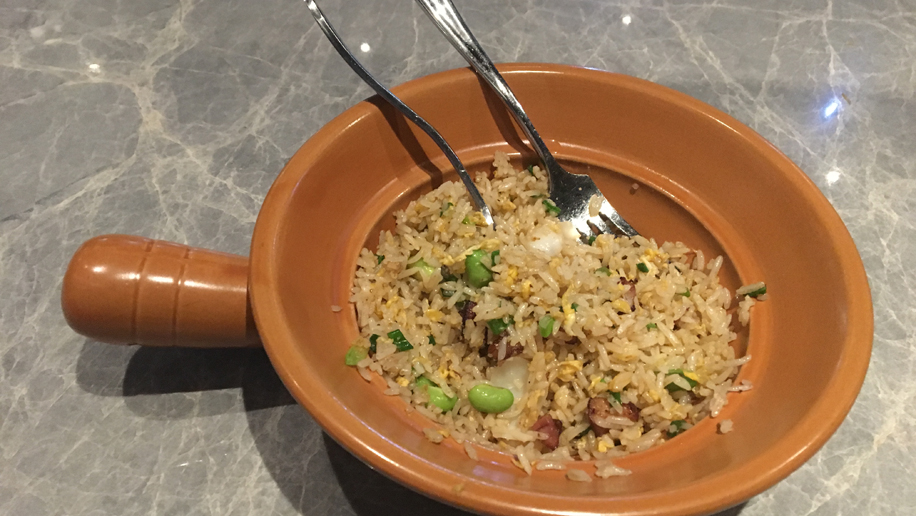 The classic Yangzhou fried rice (HK$130/US$17) features Iberico pork, lily bulb and edamame, served in a simple ceramic pot. This was our least favourite dish: both the presentation and flavours seemed dull compared to the medley of exquisite flavours and inventive serving styles that had come before. We had a nibble, but left most of it. 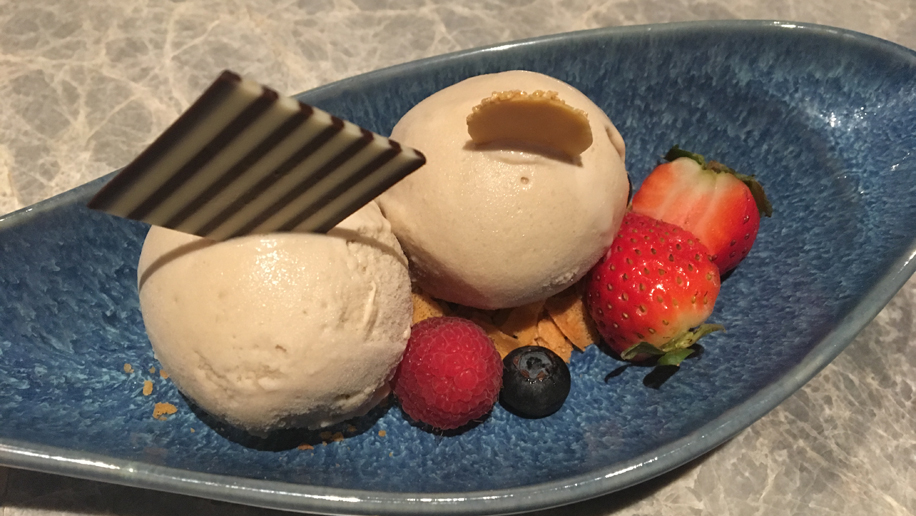 To finish, we sampled the homemade ice cream and the crème brulee. The ice cream was a surprise: the low-sugar creation featured muted flavours of cinnamon tea and cardamom that acted almost as a palette cleanser. 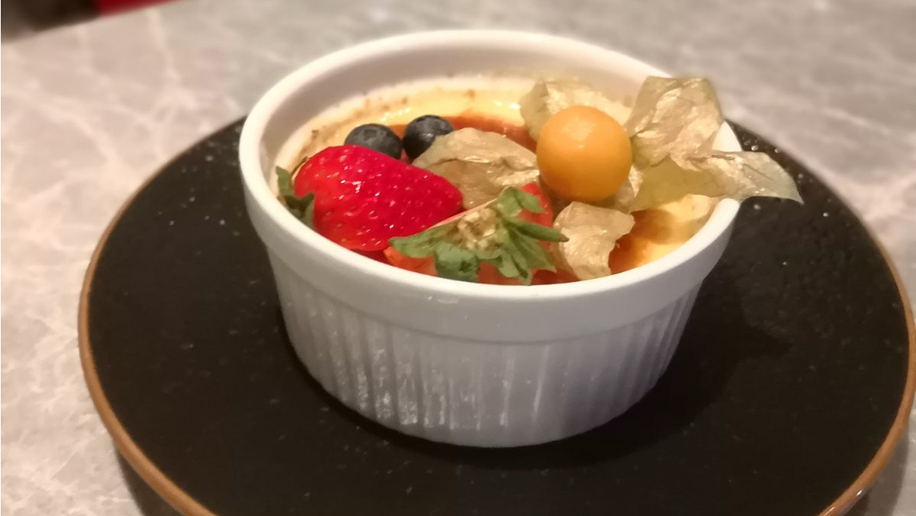 Meanwhile the crème brulee was light and fluffy with strong hints of ginger giving this classic dessert a definite Asian twist. 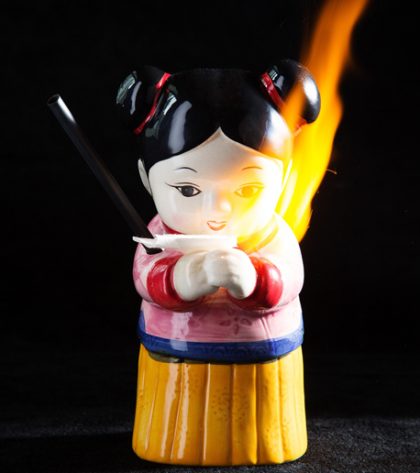 Fang Fang is worth visiting for drinks alone. The creative cocktail menu is based on the five elements of traditional Chinese philosophy (metal, wood, earth, fire and water), with some inventive flavour combination and downright outlandish presentation.
I sampled the fiery “Omikuji Girl” cocktail (HK$120/US$15), with an ingredients list of chilli, tequila, barley sochu, yuzu, cardamom, shiso and five spice. In Japanese culture, omikuji are fortune-telling paper strips. The cocktail was served in the body of a Japanese figurine holding such omikuji strips that are theatrically set on fire at the table – an excellent Instagram moment. Flamboyant presentation aside – this is a great cocktail; the heat of the chilli balanced with a sweet, refreshing taste that had multiple layers.

Service was impeccable from start to finish, with the team being professional and friendly. Plates were cleared in between each course.

When I wanted to order a glass of wine, a knowledgeable sommelier materialised to talk me through the choices: on seeing the blank look to his query as to whether I   prefer “New World” or “Old World”, he quickly adapted his technique to asking if I prefer sweet or dry.

Fabulous food, atmospheric venue and the live band was the cherry on top. I would definitely recommend Fang Fang for a fun, cool night out with friends or to impress clients in the evening. 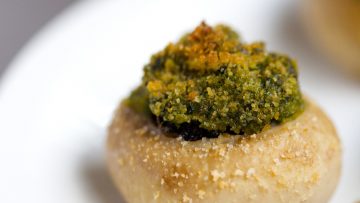 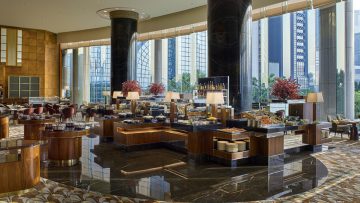 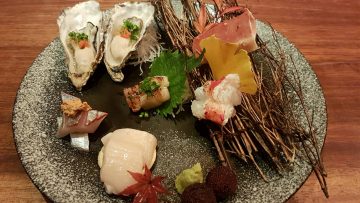 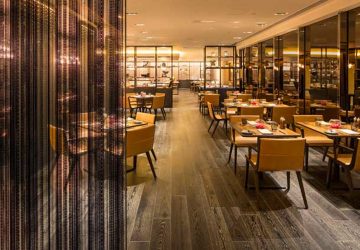