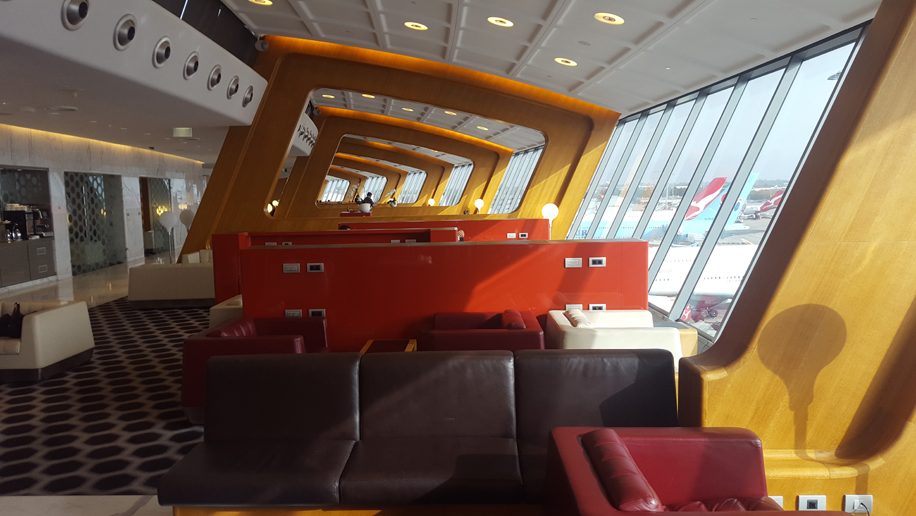 Last month, Qantas began its temporary deployment of its Airbus A380 on its Sydney-Hong Kong service, which gave me the perfect opportunity to fly the airline’s first class offering aboard its superjumbo. A full review of the flight can be found below.

Flying out of Sydney in first class also meant I’d be able to try out the more-than-a-decade-old Qantas First Lounge at Sydney Airport (the lounge opened in May 2007) before it undergoes a bit of a facelift and expansion that is expected to increase its size by about 15 per cent. 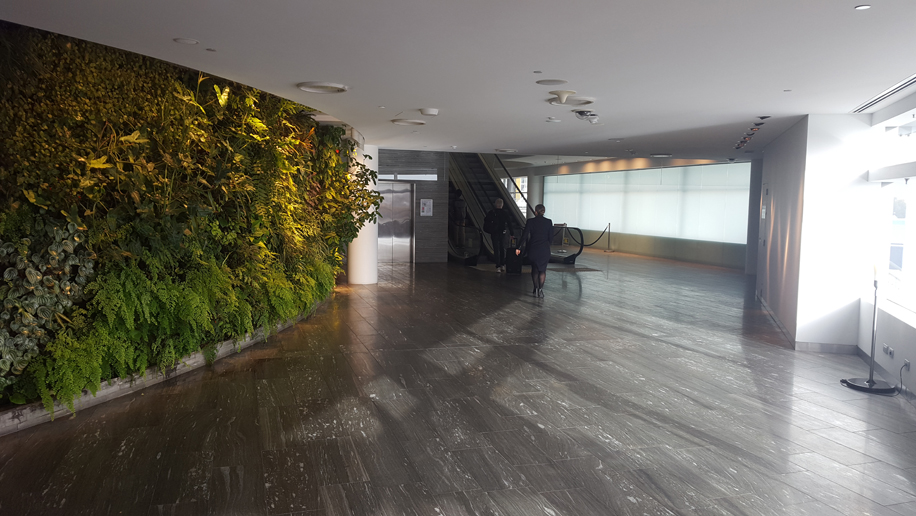 The lounge is located just beyond security on Level 4 of the international terminal. You’ll need to take two escalators to get to it – one just after the Heinemann Duty Free store, and then another after going down a short walkway (pictured above) after you’ve first showed your ticket to a member of staff. Once you get up to the lounge itself, you’ll need to hand your ticket over to another member of staff behind the desk.

First class travellers flying on either Qantas-operated flights or Emirates flights with an EK flight number are each permitted access along with one guest, who must be travelling on the same flight.

Platinum One and Platinum tier members of the Qantas Frequent Flyer programme can similarly access the lounge with one guest, provided they (and their guest) are next travelling on a flight operated by a Oneworld member carrier, or Emirates, China Eastern or Jetstar.

Finally, Platinum-tier members of Emirates Skywards can access the lounge with one guest if their next flight is operated by Qantas or Emirates. 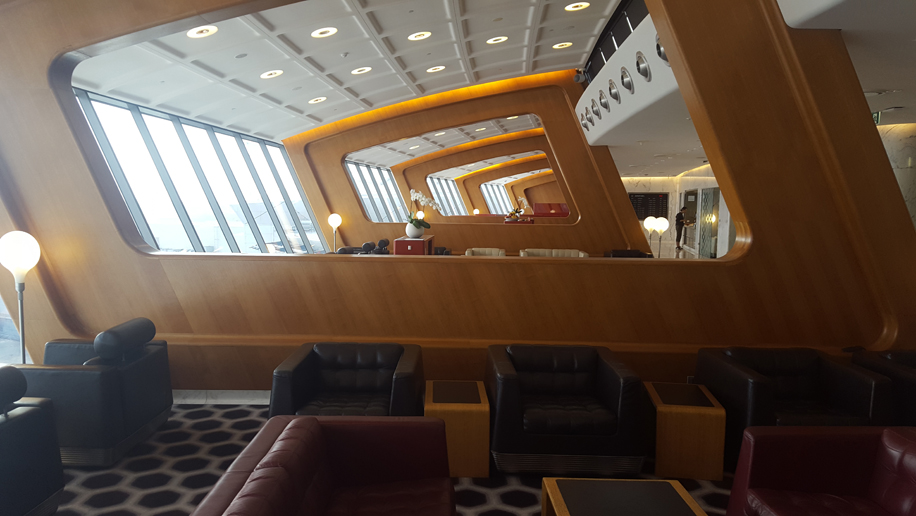 Qantas’s First Lounge may be a little old by this stage but it has managed to stick with the times well. The overall design, which features white marble combined with large wooden dividers that span the length of the lounge separating it into different sections along with smaller, bright red sub-dividing walls, is thoroughly modern and in keeping with many newer lounges that have opened recently. A clear example of this can be seen with the manned white marble bar (pictured below), located just behind the entry desk, which bears a striking similarity to the bar at United’s Polaris Lounge in San Francisco, which only opened earlier last year. 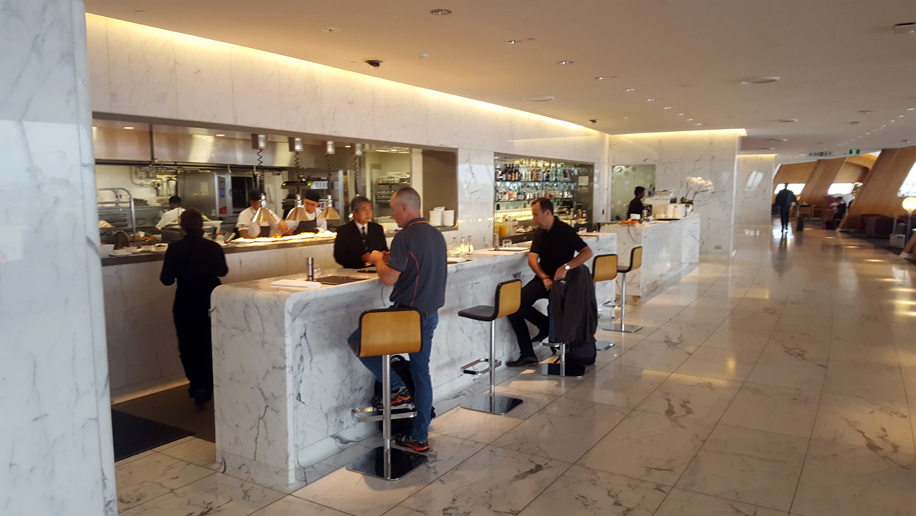 This is also a large, long lounge with ample natural light courtesy of the slanted floor-to-ceiling windows that look out over onto the tarmac, making this a good spot for avid planespotters to see a selection of aircraft – I spied two Qantas A380s, bearing the airline’s old and new livery, along with a Korean Air A380, parked just outside.

The lounge’s characteristic wooden dividers do a good job of breaking up the lounge into smaller, more private spaces without making it feel as though it’s been turned into a bunch of different rooms. The areas directly in front of you when you first enter the lounge feature dedicated dining spaces with tables and chairs, and Qantas provides table service from a dedicated menu rather than a buffet offering – a nice feature. 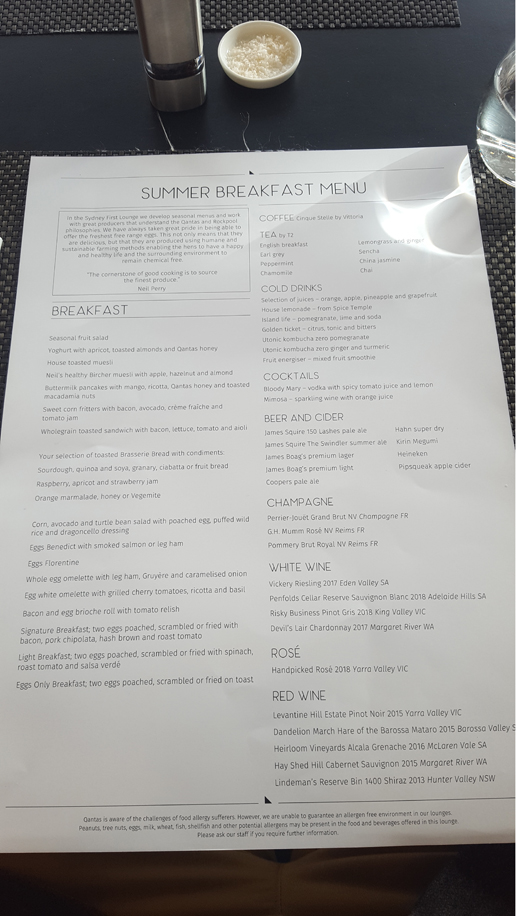 The selection on the breakfast menu was incredibly diverse, with healthier options including house toasted muesli and corn, avocado and turtle bean salads, and slightly less healthy options such as the Signature Breakfast (two eggs, bacon, pork chipolata, hash brown and roast tomato) or the omelette. Knowing I would be eating well on the flight (but not wishing to condemn myself to mere muesli in the morning), I chose the eggs Benedict with smoked salmon. These came within about 10 minutes and were delicious. 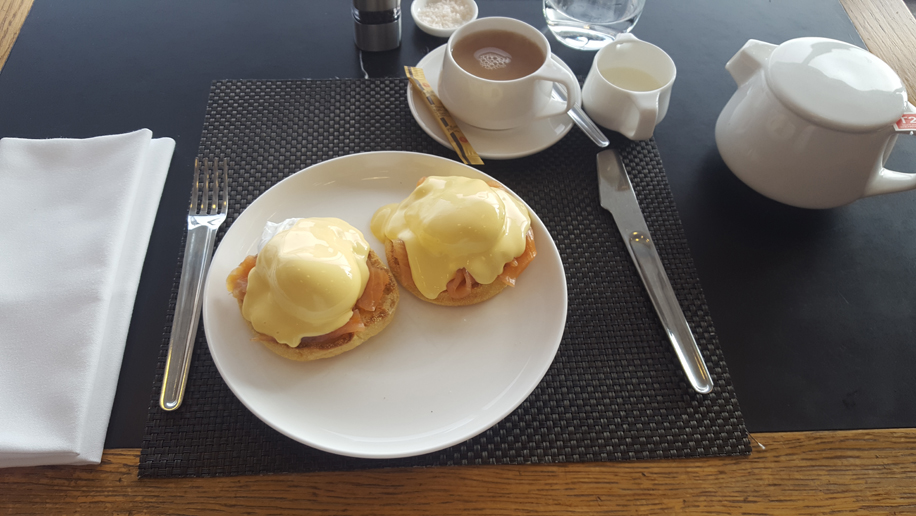 If you’re a tea fan, I’d also recommend choosing from one of the eight different teas available from Australian brand T2, which come served in a teapot with enough for two cups. Alcohol is available even in the early hours of the day, and the lounge staff were keen to ply me with champagne while I was there (which I duly accepted). There is also a selection of beers and cider, as well as white, red and rose wine. Depending on your preference of view, you can either face onto the tarmac or back in towards the rest of the lounge, with a view of the bar and open kitchen. 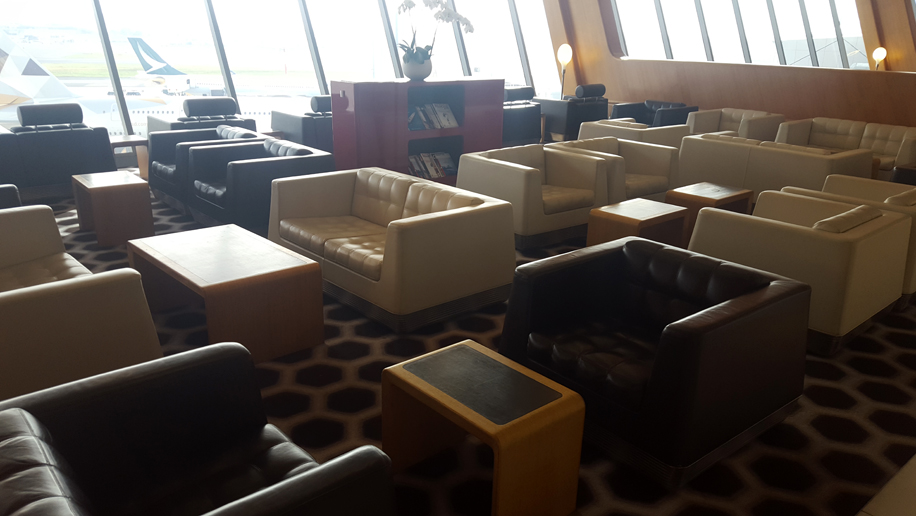 On either side of the dining areas are spaces with more lounge-style seating, such as sofas and small end tables. If you’re looking for a power outlet, try to grab a seat by one of the waist-high red dividers, though you’ll need to have an adapter with you as the ports are for Australian plugs.

Towards the right-hand end of the lounge you’ll find an even more secluded seating area with taller dividing walls along with a library-esque seating area with bookshelves. Across from the seats, you’ll also find a self-serve coffee station as well as a few work rooms with desks, a computer and their own lounge seating, making these a good option if you’re looking to get some work done in private or have a meeting. 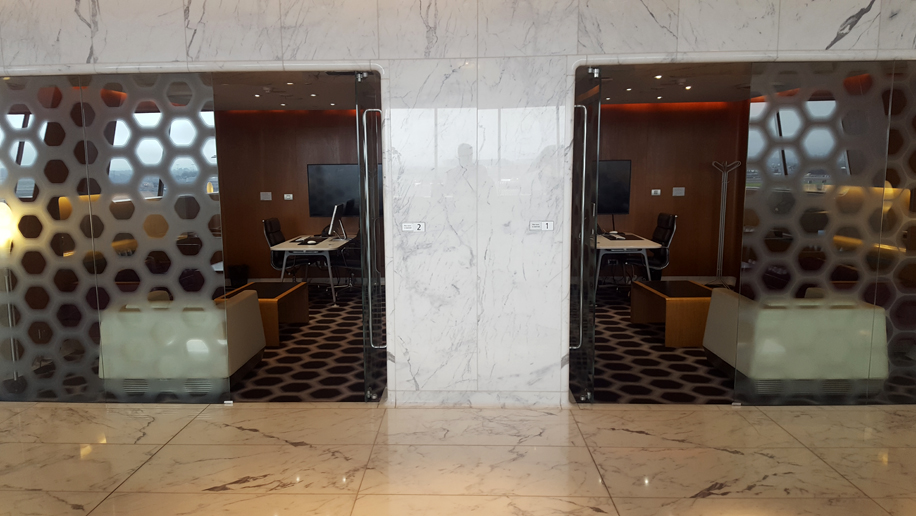 Towards the left-hand side of the lounge, you’ll similarly find lounge-style seating, along with another working area with computers and desks, though these are more out in the open. 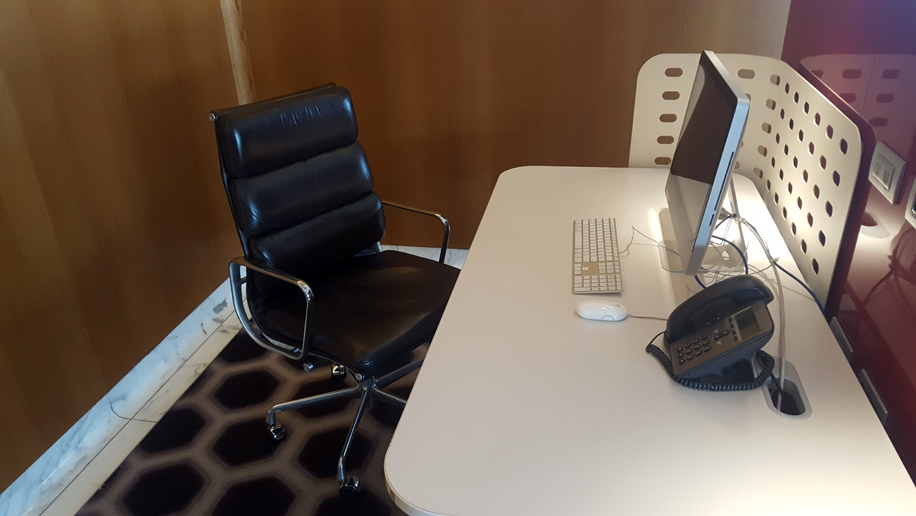 The big difference at this end of the lounge is the Aurora Spa at the very end. Walk through the door and you’re immediately transported away from the lounge environment to a quiet, dimly lit space with greenery adorning the walls. 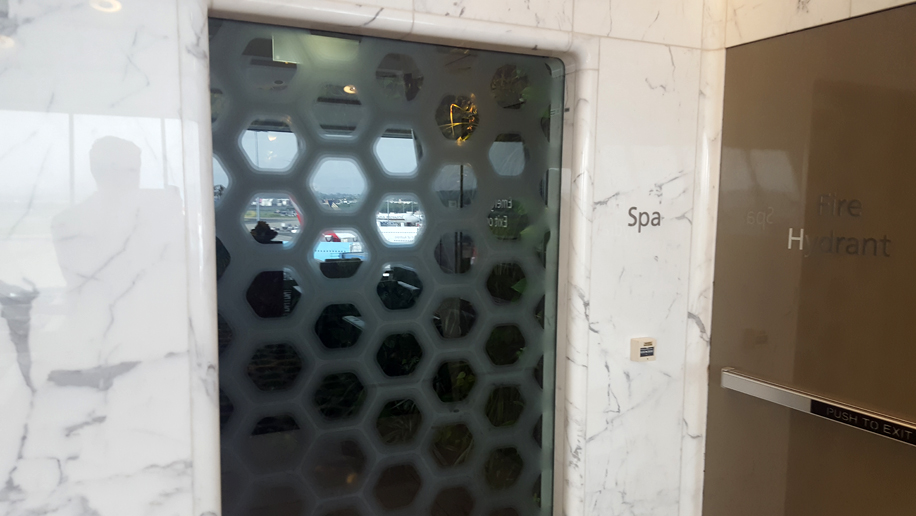 Qantas first class passengers are given the option to reserve an appointment ahead of time (which I did), though for everyone else you’ll need to try your luck. The spa is popular and gets busy quickly, so I’d recommend heading over immediately to see if you could sneak into an open slot. 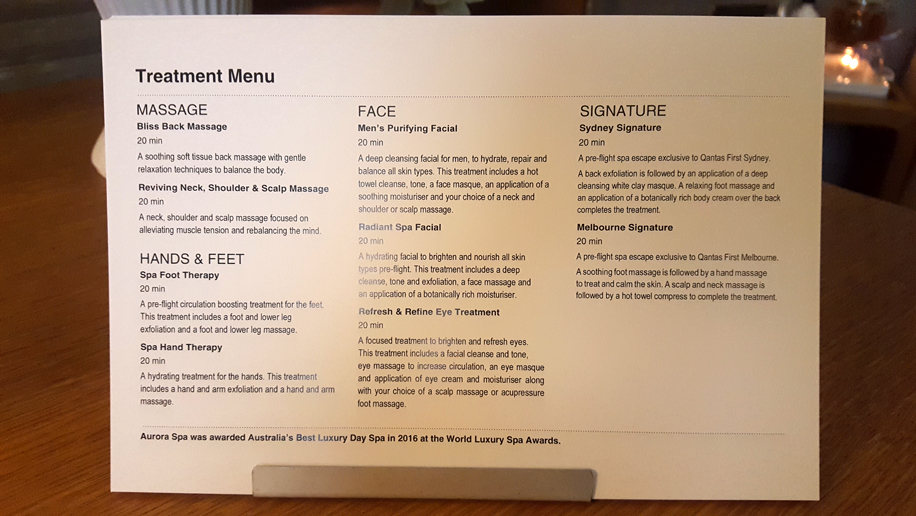 All of the treatments here are 20 minutes long, and range from facials to full body massages. There is also a Sydney Signature treatment only available at this lounge (guests here won’t be able to try the Melbourne Signature, however). I chose the Men’s Purifying Facial – the first facial I’d ever had – and I can confidently say I am now a convert. The treatment was thoroughly relaxing and my skin felt incredibly refreshed and ready for the rigours of a nine-hour flight. Treatments are conducted in individual rooms, complete with showers and wardrobes to keep your clothing and belongings. 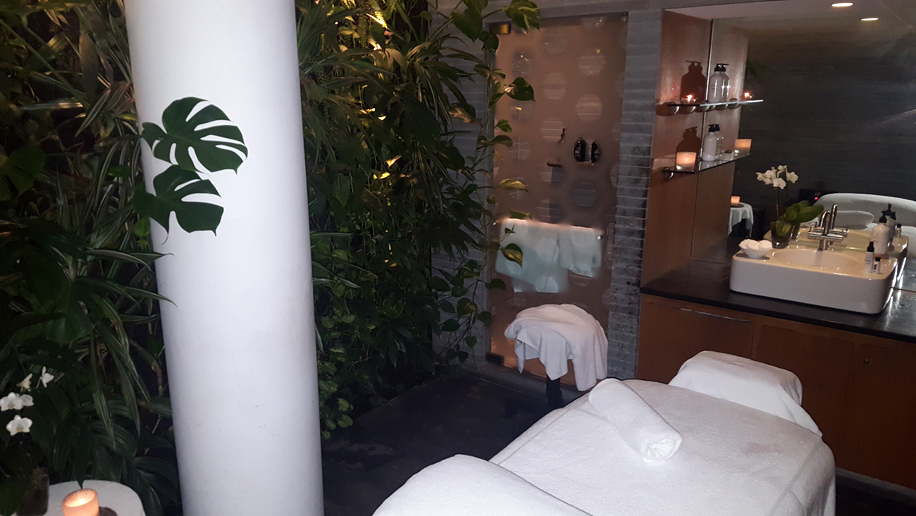 Announcements are made for Qantas-operated flights, though you may still wish to keep an eye on the large, old school split-flap information board – the only part of the lounge that belies its age – for information on when to head to your gate.

While the lounge certainly wasn’t crowded when I was there in the early hours of a December Sunday – indeed, the far-off areas of the lounge were practically empty – the dining area was very busy, and I can imagine that on a weekday it could be difficult to find a seat at the dedicated dining tables. Qantas’s planned expansion, especially one accompanied by a facelift, can only be a good thing.

Qantas has a stellar first class lounge offering at Sydney Airport, despite the facility’s growing age. The design remains modern; service is friendly and attentive; and the spa alone puts it among the top lounges I’ve visited. With a variety of secluded seating areas available, lovely food and beverage options and plenty of natural light, this is a lounge I could easily spend a great many hours in. 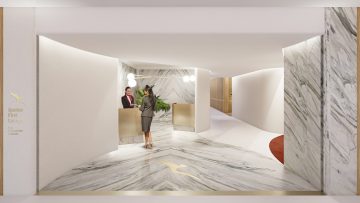