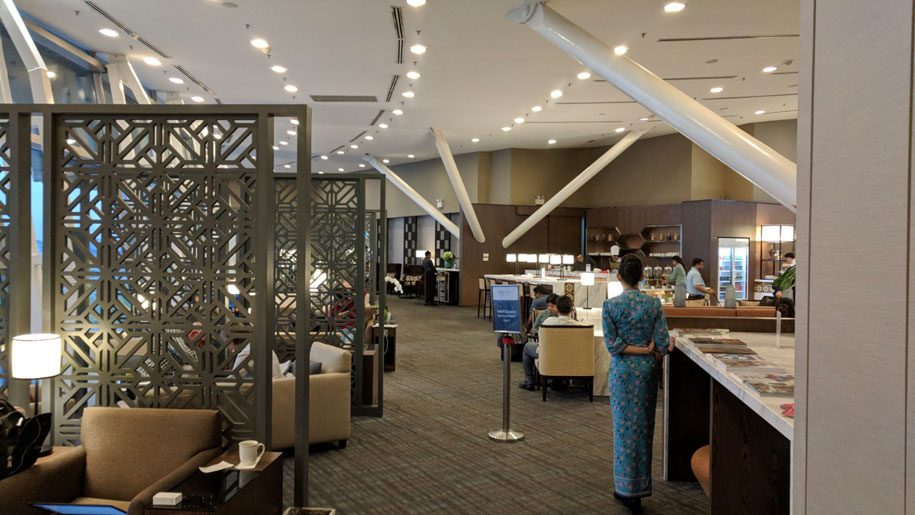 The lounge is accessed up escalators (or a lift) from the main terminal. If you are coming towards immigration and the KLIA Express you’ll see the sign for it on the right. 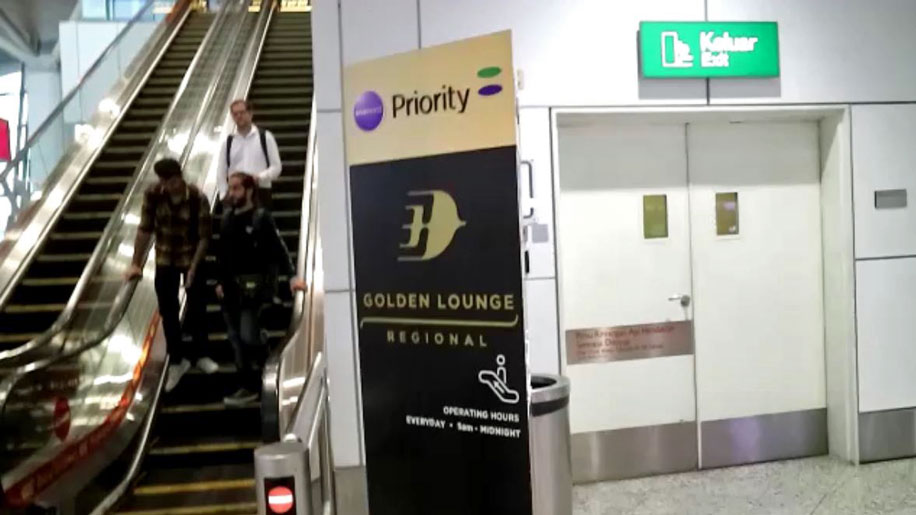 Opened in October 2017 after about two months of refurbishment, this is a taste of what Malaysia Airlines hopes all its major lounges will become.

It’s a comfortable, spacious place, with great food and drink, free wifi, and several areas where you can relax, work and even take a shower. I spent about four hours in the lounge, and managed to do all the work necessary before my flight home to London from KL.

There are plenty of seats with power points next to them, essential not just for business travellers but also leisure travellers with their iPads and phones (and particularly children). A couple sitting behind me were using their ipad to have a Skype conversation with relatives at high volume, but fortunately it was relatively brief because they had very little to say to one another.

Close to the buffet there is a communal area where people can network or just work and also a nap area with three lounging beds for men and three for women (these are in separate rooms, if you’re a couple you have to separate – it’s for napping, not chatting). You place your boarding pass in an acrylic holder so staff can wake you up, though I’d be inclined to set an alarm as well.

Next to this is a prayer room (for Muslims) and then the washrooms, including some good shower cubicles (and a shower to use in them). There was no queue when I was there, but I imagine they get busy in the evening. I also asked for (and received) razor and toothbrush kits. 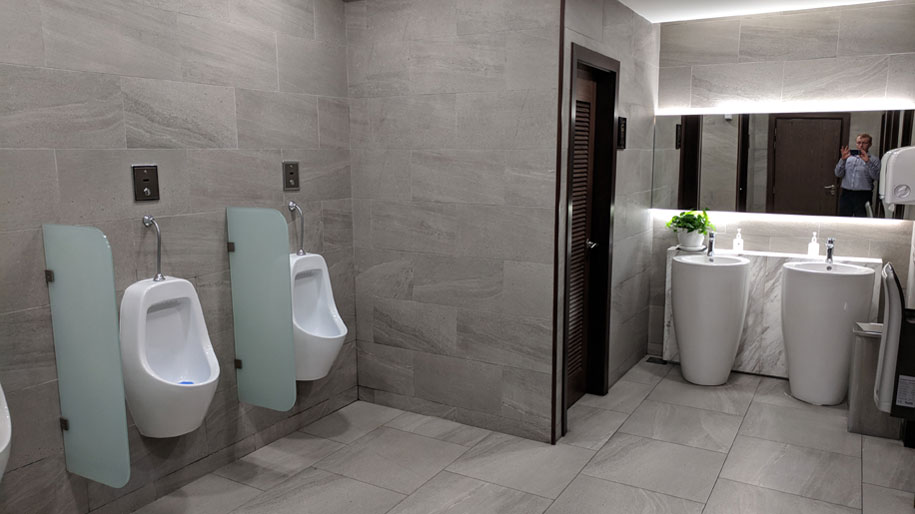 The overall design is intended to reflect the Malacca Chinese and Malay heritage of Malaysia. The food served was described to me as “fusion”,  since it is designed to cater both for the local taste buds, but also for foreign visitors.

There is a coffee bar from which sandwiches are served as well as several different types of coffee, prepared by a barista, and tea (there are also machines for those who prefer to serve themselves).

This area also offers a waffle station, which seemed to be very popular. There were also several types of flavoured (or infused) water.  Next to this are large fridges filled with varieties of canned soft drinks (beers are available from the bar). 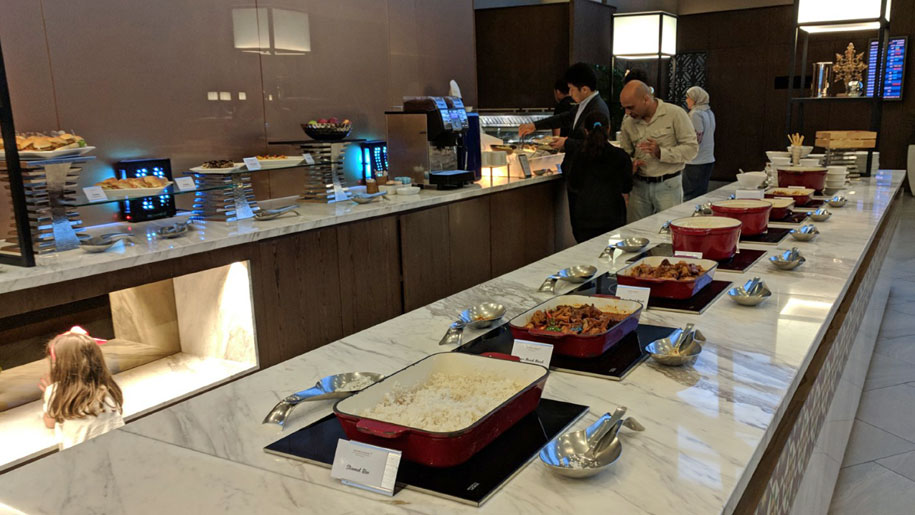 The buffet food bar serves food appropriate to the time of day. There are chefs behind to cook fresh noodles and pasta, as well as a Laksa bar with the exact type of laksa changing each week – the week I visited it was curry laksa, but this might also be Laksa Joho, Laksa Sarawak or Penang Laksa. 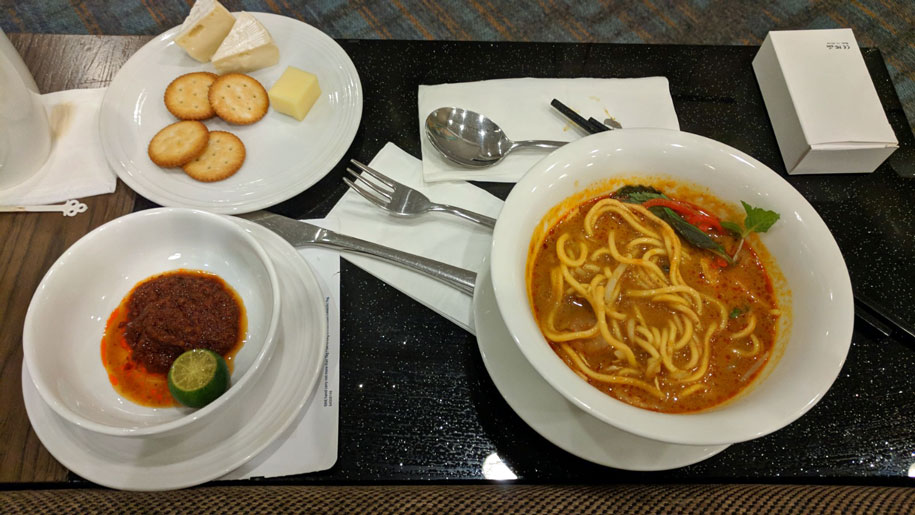 On the website this is described as follows, “Our buffet features a selection of Asian, European and International dishes with the menus rotating weekly. Passengers can indulge in favourites such as Chicken Biryani, Beef Korma and Grilled Fish with Mango and Chilli Salsa depending on the week they are travelling in. There is also a selection of healthy salads, sandwiches, fresh fruit and soup. For a uniquely Malaysian experience, enjoy a bowl of Laksa from our Laksa Bar. Each week highlights a different type of Laksa from the various states of Malaysia.” 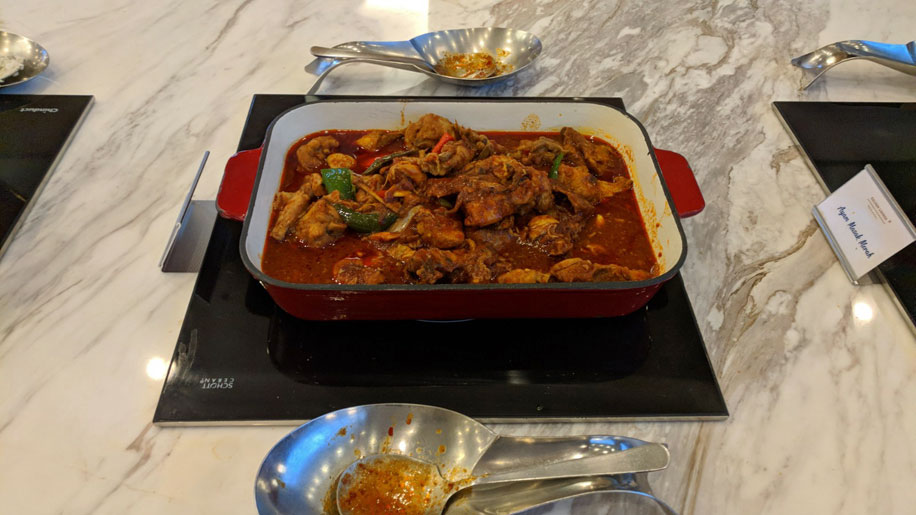 The lounge also has a bar, which is open from 0500-2400. Drinks are free – I was made quite a stiff gin and tonic. There was no slimline tonic, but I didn’t let that spoil my enjoyment.

I sat at the bar for a short while and noticed how rude people were when talking to the bar man and the bar woman. The drinks were demanded without a “please” or “thank you”, as though the fact the drinks were complimentary lessened not only the value of the alcohol, but also the job of serving it. Perhaps these passengers saw the bar staff as presenting an unnecessary barrier stopping them from exercising their “free pour” rights. After about five minutes I said my own thank you and moved away from the bar. I didn’t want to get into an argument and it probably wouldn’t have helped the bar staff if I did. 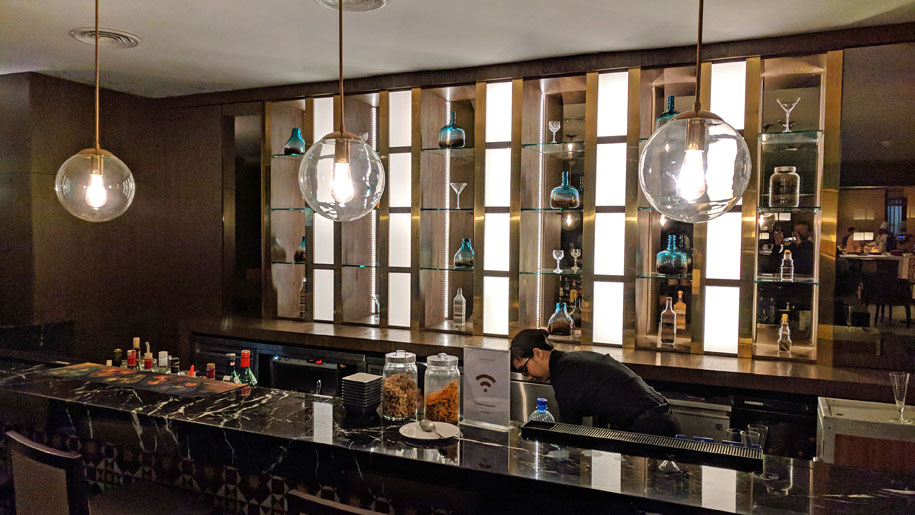 First class and Malaysia Platinum passengers also have the use of a first-class area and VIP room, though note this is not for Emerald cardholders – apparently there are too many of them for this to be practical. 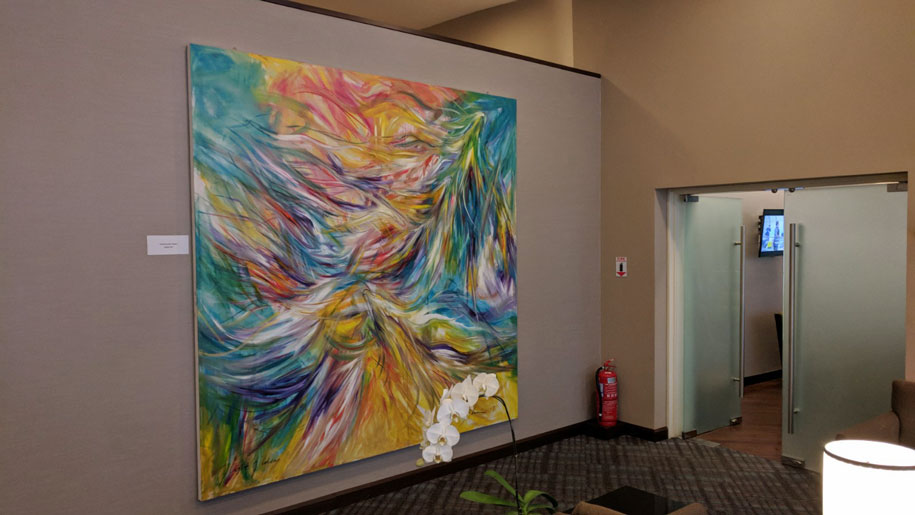 There is a children’s play area to one side of the lounge and, as well as views out to the runway, there is also a very high ceiling with high windows – almost clerestory windows, meaning the lounge feels spacious and also has lots of natural light. There was a reasonable choice of magazines and a good choice of newspapers. At one end of the lounge, on silent, a television showed the news and there were several screens showing flights. 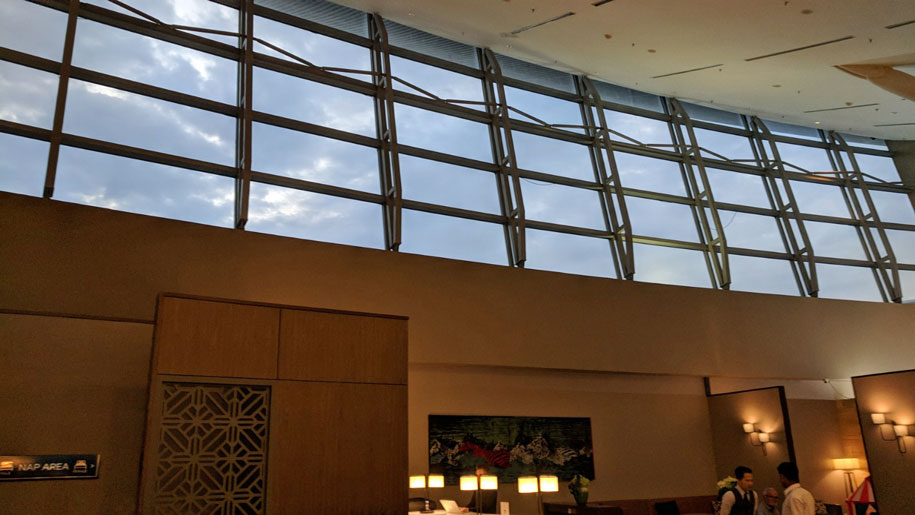 Excellent. I’m looking forward to seeing this design in the new International Lounge when it opens next month (February 2018).

Who can enter the lounge?