This was the inaugural flight of one of Malaysia Airlines’ new A350 aircraft on the London Heathrow to Kuala Lumpur route, so the pre-flight experience was very different from normal. For one thing, I arrived five hours before the departure time of 2130, not something I do unless work is very bad. I was so early, check-in wasn’t open, though I had already done that online and had no bags to check.

Check-in for Malaysia Airlines is in Terminal 4 of London Heathrow in Zone C, by the way.

We went through to the lounge for presentations and tours of the aircraft for those not flying on it. 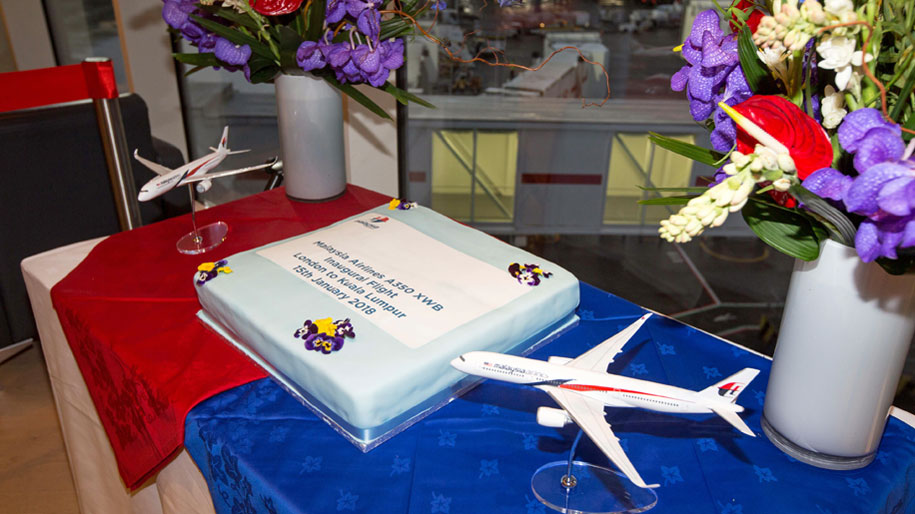 Malaysia Airlines has leased six A350 aircraft, two of which have not arrived yet.

The intention is for the A350 to serve first one of the double daily flights on this route and then the second, but with the option of using the current A380 at times when there is high demand.

The airline hopes that these new, efficient aircraft will help the route to become profitable; the A350 certainly reduces both capacity and costs on this route.

I will post a full video review of the flight shortly.

There is both a business and first class lounge, and both have good views over the airport including the stands where the MAS aircraft are parked.

The lounges are comfortable and clean, attractively decorated but dated and due for a refresh, particularly with the lack of powerpoints / plugs in the lounge. But the bar and general service as well as the food selection make this a very comfortable place to wait for the flight. It’s a long time since I was in this lounge – in fact, it was the last inaugural, in 2012. At that time they gave out a certificate, to which you later glued your boarding card. What a good idea as a memento. 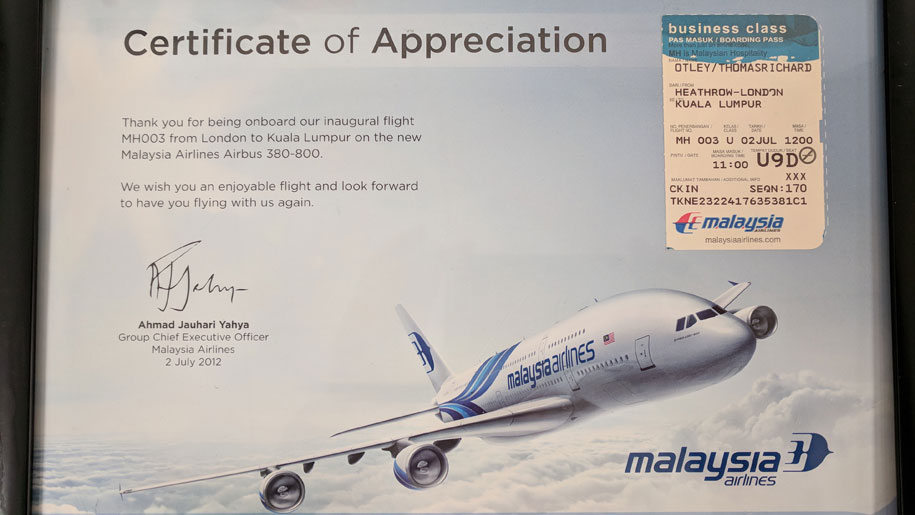 I took a video of the lounge and will do a separate review of it and place the link here when it is completed.

We were called from the lounge and walked the short distance to gate 5A. Once our passports and boarding cards had been checked, we walked down onto the air bridge where economy and business class passengers were directed to different doors.

The seats are all standard in the sense they are the Thompson XL Vantage seat.  The cabin has quite a few quirks in its layout, not least the 1-2-1 and then 1-2-2 configuration of each row. It means some seats are preferable to others (see below for the best seats and also the video).

The seat colour is grey, and the cabin itself is quite neutral. There are blue duvets and seat covers already at the seat, and the amenity bag containing flight socks, toothbrush and toothpaste as well as amenity products by Bulgari is black.

The seats have differing amounts of storage space, depending on where you sit, but all have full automation with pre-sets for sitting, relaxing or sleeping. There is a powerpoint in the seat for EU, US or UK plugs, and of course wifi on board, which costs $20 for the entire flight. We were given a voucher for a plan “Social Plan” which I put into my computer, but the 20MB was exhausted before I had even downloaded a single header from my email. I should have used it to be “Social”, as suggested by the label on the package, though keeping in touch with people at midnight might be more anti-social than anything else. 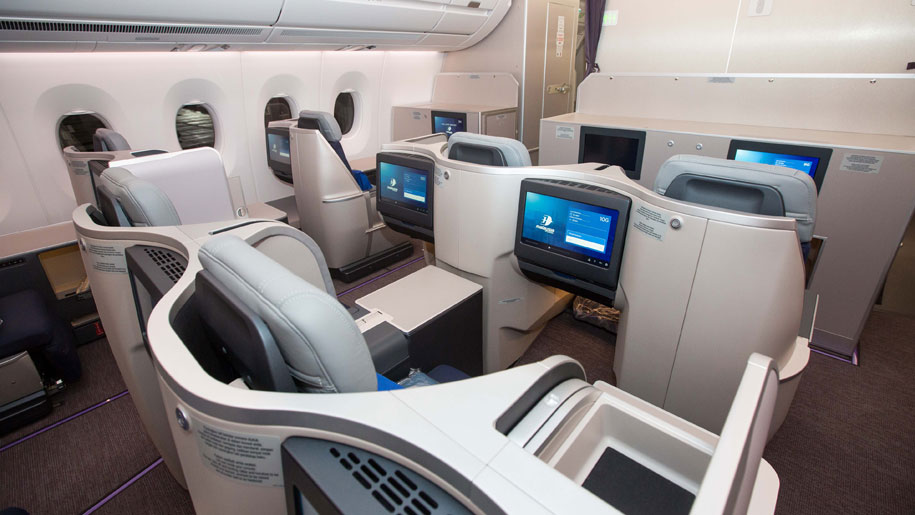 What’s strange is the seat has an extra belt that comes over your shoulder and which I’ve always understood needs to be used for take off and landing. We weren’t shown this, and we also weren’t give a safety demonstration either on the IFE or by the crew on take-off. I hope this was an oversight because it was an inaugural.

It’s rare to have such a selection of seats in business class that have such varying qualities (but not unknown – Aer Lingus is similar – because it has the same seat). It isn’t just a question of which seat is near the washrooms or galley and so likely to be disturbed. Nearly every seat on this aircraft is different, from the window seats which alternate their position being either close to the aisle or more secluded.

In the rear cabin the best seats are 9K, which is a throne seat with storage on both sides of it, then 10A, which is a window seat but with the side table between it and the aisle. For the seats in the centre of the cabin, these have alternating side tables, so one passenger loses the table while the other gains it. In the back row – row 11, it’s slightly more equitable, since both of the passengers lose out and have to make the best of it by sharing a centre console. If travelling on your own, go for a window seat, preferably the single “throne” one, but failing that, one on the other side of the cabin close to the window. Avoid the centre seats, and if are assigned one, try and choose one with a side table, though without the seat map to hand, that won’t be easy.

Before take-off we were offered a choice of drinks including champagne, and also hot towels. We were prompt in pushing away and there were no delays in getting air borne, with the pilot telling us the flight time (12 hours) and the possibility we might arrive early. Menus were passed around, with a separate drinks menu. I have listed these below. Please feel free to skip.

The supper was served from 2230, about 60 minutes after take-off and then the satay was served with a choice of chicken or beef (you can have both). This was delicious and can be seen in the video.

For those who didn’t want a full meal, or didn’t want it then, there was also the choice of a “Dine Anytime” menu, which I have noted below.

The meal was served without any fuss, and since I wanted to work, I liked the way the flight attendants were ready to take the tray away as soon as I had finished so I could carry on working.

At seat 10A I had sufficient room that when the food was served I could place my laptop back into my bag at my feet and eat, while still keeping my various devices charging on the side table along with the drinks. In between courses, which are brought separately, I could get the laptop out and continue to work, placing the tray on the side table and the devices in the locker to one side of the arm rest. This was important because I had work to do, but I also wanted to eat so I could then relax and sleep for the maximum amount of time. 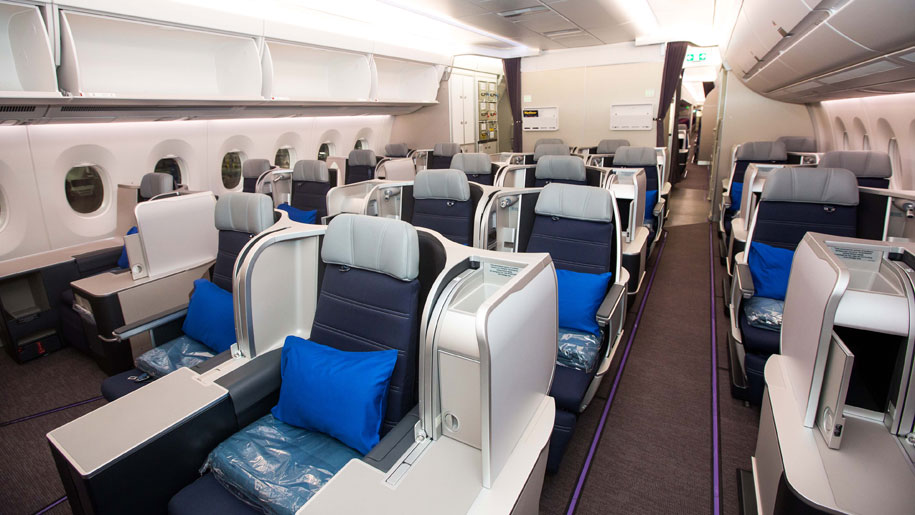 Once the meal was finished and I’d done my work it was around midnight and time for sleep. The seat reclines fully flat, and also comes with a seat cover which you hook over the headrest before reclining the seat to keep it in place. There is also a small pillow and a blanket, almost duvet-like but not too thick. The temperature in the cabin was cold for the first hour but a few passengers asked for it to be warmed up and afterwards it was comfortable or even on the warm side.

When the bed is reclined it’s a good idea to play around with the controls of the seat since you can alter the firmness of the cushions. I found it quite hard at first, but with a little experimentation it was Three Bears just right.

The seat is quite narrow, and the footwell doesn’t have a lot of room in it, though you can lower the armrest to get more room. This is easier on a window seat close to the window (such as 10A) because you don’t have the fear of your arm falling out of bed when asleep and being caught by a passing trolley. I found it easy to sleep once I had the earplugs in and eye mask on, though there were some passengers in the cabin still chatting away, perhaps because they didn’t want to sleep too much so they could sleep when we landed in the evening in Malaysia.

Some time towards morning the fasten seat belt sign came on, and apart from few minutes respite, it stayed on for two or three hours. The second meal service was disturbed because of this, with firstly no hot drinks, and then just as the trolley was coming through the cabin an immediate instruction from the pilot for the flight attendants to take their seats, which they did in the business class seats around us, with the trolley in the aisle.

The selection for the second meal was

I chose the nasi lemak (rice cooked in coconut milk), which came with a Malaysian beef curry and other trimmings, and was very filling. 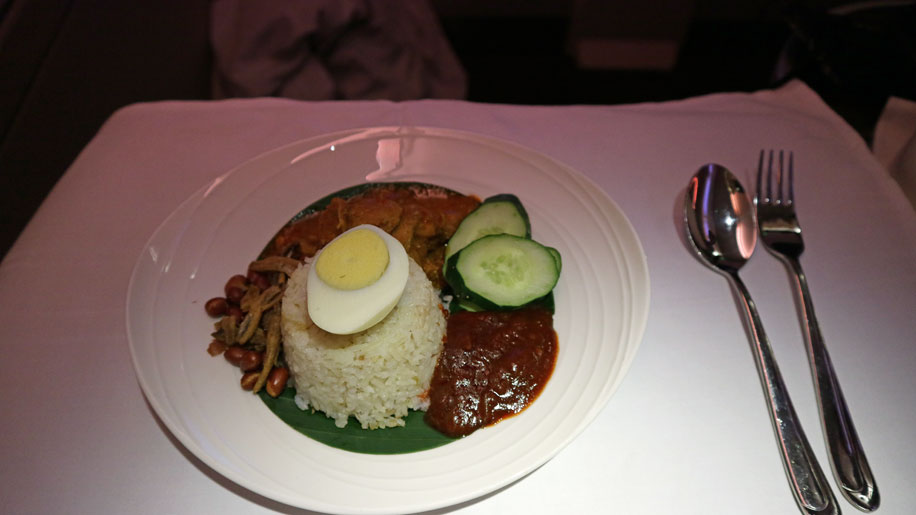 As promised by the captain, we arrived early into KL by about 40 minutes. There was no delay with disembarking.

I used the transit train to head for immigration, but in the main terminal just before taking the escalator to immigration, I went to the Regional Lounge to have a look, and then prepare for my flight on the A380 back to London.

This is a very good business class with delicious food that raises it above many competitors. It’s difficult to make a comparison with the A380 because it is so different, but you can read the review of the return flight here

My seat was comfortable, if not outstanding (it is a standard business class seat as mentioned above), and it felt quite narrow;  though this sensation is, ironically, made worse in first class by the addition of the doors – something I know the airline is considering doing something about.

The service was good – though I’d prefer it if we were told to use the seatbelts properly, and passengers were told to stow their belongings. A safety demonstration is also mandatory, even if it’s an inaugural flight.

But… I would fly with Malaysia again very happily (and of course am about to, back to the UK on the A380). The staff are friendly, almost informally so, but with a refreshing willingness for you to enjoy the service and the journey, and of course Malaysia as a destination.