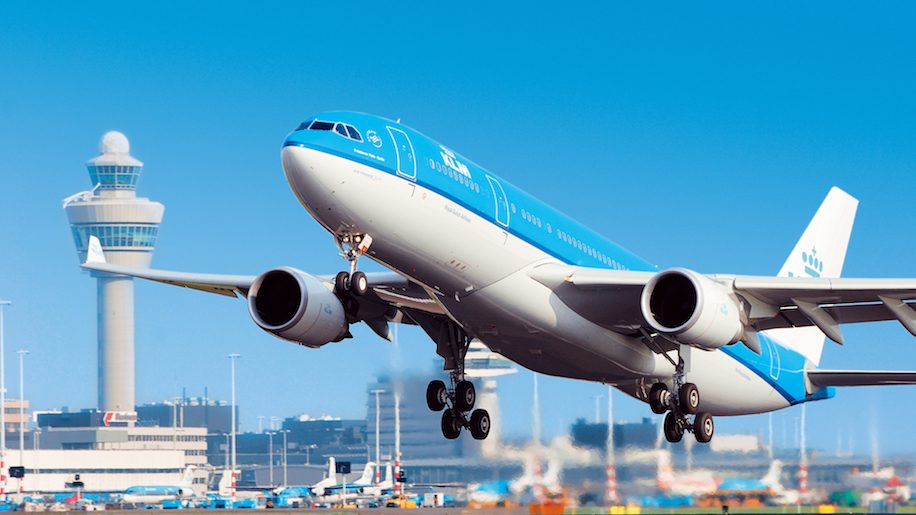 There is very little wifi available in Cuba and no 3G so I was not able to check in online in advance. (The big hotels do have wifi at a fee of about £2-£7 an hour but I was staying in a bed and breakfast). I had chosen and paid for my seats online in advance though, and logged on a few days before my outbound trip to manage certain details, including pre-booking a special vegetarian meal and selecting my seats in advance.

There are various paid-for options with advance seat selection with KLM that offer extra legroom or are simply “preferred” due to their location in the cabin. I decided to stick with my seat assignments (selection wasn’t available on the Amsterdam-Havana sector until check-in opened).

There is also the option to log into klm.com through Facebook or LinkedIn, and who else is onboard your flight and send them messages. This “Meet and Seat” service was introduced by KLM in 2012. I logged in as an experiment but couldn’t see anyone else who had (not surprising).

Passengers can also request more superior pre-paid meals such as Champagne Delight (herring caviar, smoked tuna salad, spicy Korean rib-eye and a small bottle of fizz) for £22.60 for the long-haul sectors. I didn’t bother. I downloaded the KLM iPhone app, using it to check in the morning before my flight.

When it came to check-in, there weren’t very many empty no-fee seats left in economy – those that were, were in front of the washrooms or in the middle, between the two aisles. There were a few single seats by windows and on aisles but because I was travelling with a companion we wanted seats together.

For this reason I decided to pay for seats 25A and 25B, over the wing, on both the outbound and return long-haul sectors. My boarding pass was viewable on the app – you can also print it out or have it emailed.

I arrived at Terminal 3 of Havana Jose Marti International airport at 1545. This was a little later than I meant to get there but got delayed by a police blockade for Fidel Castro, who passed right in front of my car while we were waiting at traffic lights.

My flight (KL0724) to London via Amsterdam with KLM was due to depart at 1820. Once in the terminal, in Hall A, I joined the long, snaking queue for economy class check in. Desk two was for Sky Priority and business class passengers, while desk three was for bag-drop for anyone who had managed to check in online. Everyone else had to wait for their chance at desks four, five, six and seven.

It took an hour to have my luggage processed – the woman working on my desk was undergoing training so was very slow. My bag was weighed and tagged at 1645, and a boarding pass issued. Security was around the corner – there was only one screening channel open but luckily it only took ten minutes to get through (there was no need to take laptops or liquids out).

I then had to wait in line at immigration, where my tourist card was taken and passport stamped. I was also photographed. There is no longer a 25CUC “exit fee”. I was airside by 1705. As you can’t change Cuban currency outside the country, I had to change it in the airport. There were no British pounds so had to opt for euros.

Fed up of queuing behind people I decided to get to the front of the line forming at Gate B11 in the departures concourse at 1730. This paid off, as I was one of the first to board when passengers were called forward at 1545. After documents were checked, boarding took place via an airbridge to the front of the A330-300, and I was in my seat (25A) by 1800. A selection of free international papers, including The New York Times, were available to all. It seemed like a very busy flight so it took some time for everyone to get settled.

This isn’t KLM’s newest economy class product but it’s not in bad condition. The cabin was clean and the seats in good nick. The picture quality of the in-flight entertainment screens isn’t as sharp, rich in colour or as clear as on more modern systems but there is a good choice of movies. Just make sure you bring your own headphones as the ones provided are terrible. Legroom isn’t horribly tight (31 inches) and there is the added benefit of the A-B, H-J seat pairs which are a great option for people travelling together.

Upholstered in textured royal blue fabric with adjustable headrests, the seats have solid fold-down tray tables, USB ports, IFE remotes in the armrest and seat-back pockets. Pillows and blankets are provided. One design fault was the fact that aisle armrests didn’t lift up and central armrests only lifted up half way, which meant it was really difficult to get out (impossible with the tray tables down). There are no footrests either. KLM is has introduced wifi to some of its B777-300ERs but internet access is not available on this aircraft yet. (Below is a picture of the A330-200 cabin – the exterior of which is also shown above.) 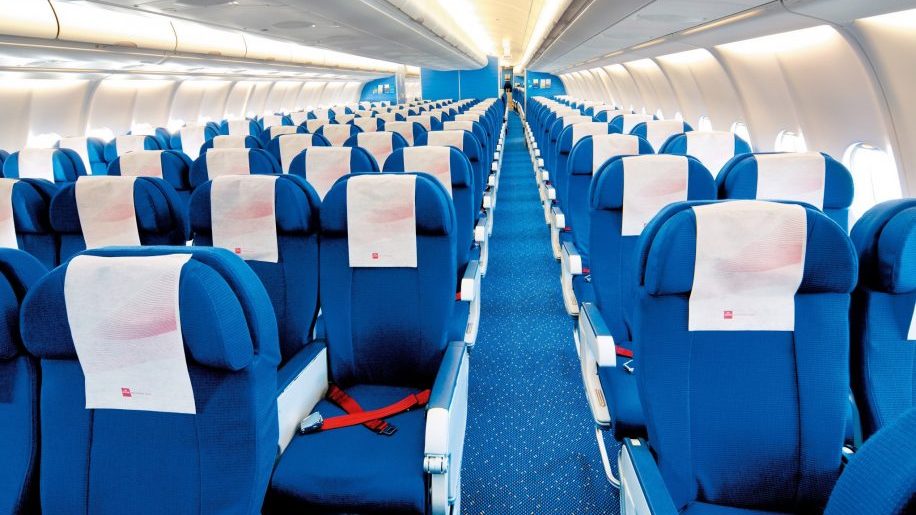 Rows 16 to 28 and 30 to 45 are economy class, while at the front, between business class, is Economy Comfort (rows 10-15), which is the same seat but with more legroom. Avoid sitting too near the washrooms (row 28, 44 and 44, as well as aisle seats in row 27 and 43), and middle seats E-F in the middle of the plane. Sitting nearer the front means you will be served food and drink first. Sitting near the emergency exits is much colder than the rest of the plane. Some people pay for the extra legroom offered here – just pack some warm clothes.

We pushed back ten minutes late at 1830, when a safety video was played, and took off 15 minutes after at 1845. The captain announced that the flight time to Amsterdam would be eight hours 45 minutes. It didn’t take long to reach cruising altitude and for the seat belt signs to go off. At 1905 hot wipes were handed out, followed by a drinks service (wine, beer, soft drinks and free-pour spirits (as opposed to miniatures) were available.

My vegetarian meal was served first at 1920. It was pretty poor. The main was a hot pasta with melted cheese and peas (it tasted weirdly sweet), along with a soggy green bean salad with an unpleasant jelly-like vinaigrette on top, a long-life bread roll, crackers, Gouda spreadable cheese, papaya slices, a chocolate and a bottle of water. 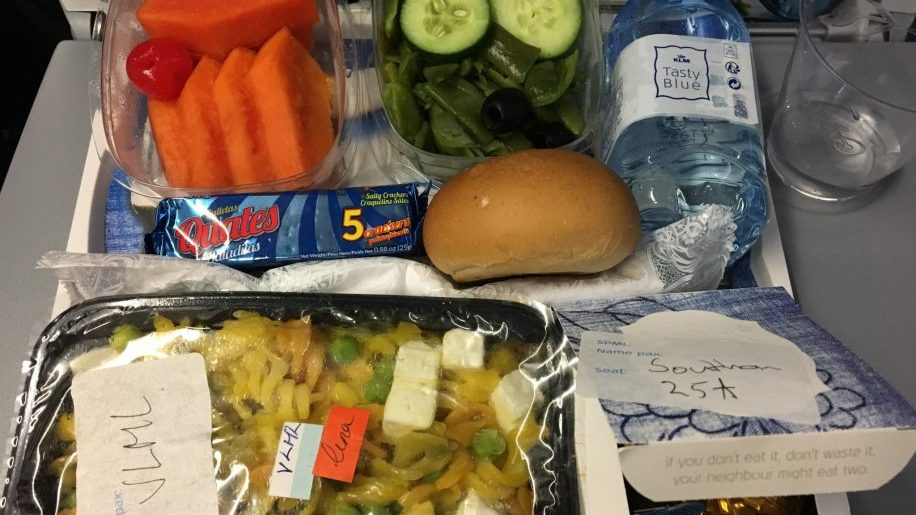 I watched a film on the IFE but had accidentally left my headphones in my suitcase so had to use the over-ear ones provided, which were delivered very bad quality sound together with a fairly grainy, dull picture. There were another two drinks services, the third for tea, coffee, brandy and Amarula cream. The crew efficiently cleared away rubbish throughout the dinner service. (Below is a photo of what other passengers ate.) 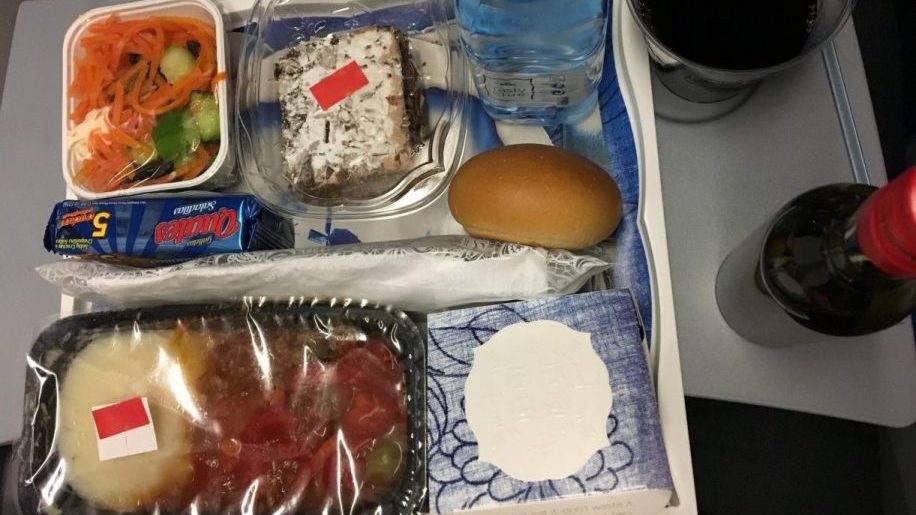 The cabin lights went out at about 2130, but sleeping was made difficult for anyone without an eyemask because the non-smoking signs above every seat glowed so brightly. I was trying out a new scarf-style neck pillow (you can read reviews of a variety of pillow here), which helped a little, but ultimately I felt very uncomfortable and couldn’t really sleep.

There was also a baby a few rows back who cried intermittently. At 0210 the lights came back on and breakfast was served. The main was eggs with peppers – my lacto-ovo option was an uber-sweet pancake filled with syrupy peach and topped with canned peach slices (I could only eat a spoonful). There was also a pineapple and papaya salad, some fruit yoghurt (again both very sugary), a roll with Gouda spreadable cheese/butter, and a bottle of water. Tea and coffee were served at 0250.

The plane landed in Amsterdam Schiphol on schedule at 0330 (0830 local time). It took a while to retrieve my belongings from the over-head locker and exit via an airbridge from the front of the aircraft. I entered the terminal at 0910, with one hour 20 minutes until my connecting flight to London. However, upon arriving at the gate, I found it was delayed until 1145 because of fog in London.

This flight was a bit of an endurance test, what with the queues at check-in, the poor food and entertainment, and then the delay to my transfer to London. It was a night flight too, and I didn’t get much sleep. The crew were professional and friendly though.