A lovely purpose-built hotel dating from the turn of the (19th) century and now emerging from a £7.5 million renovation. It is part of the Millennium group, which is less well known here in the UK than worldwide, but which gathers its hotels into three collections: Millennium, Copthorne and Leng’s. This last includes the Bailey’s Hotel, as well as The Chelsea Harbour Hotel.

The branding on the Bailey’s hotel is fairly discreet – including the revamped website, but if you are a member of the Millennium programme My Millennium it is possible to earn points (and burn them by staying there).

The hotel is surrounded by Victorian-era townhouses, and the lobby echoes that, with an elegant staircase leading up to the first floor, stained glass windows and a grandfather clock. It’s worth noting though that since this is a historic building and there are steps to access many of the rooms within the hotel as corridors traverse from one building to another.

At the time of my stay one of the three guest lifts was being repaired and, of the other two, one seemed liable to stick or go out of service on certain floors, but this is being addressed, I am told, and by June they will all have been renovated.

A really convenient position, directly opposite Gloucester Road underground station which is on the District and Circle and Piccadilly Lines (access to Heathrow and Central London). Together with the neighbouring Millennium Gloucester Road (which isn’t on Gloucester Road), the hotel occupies a whole block, so the entrance is on Courtfield Road and rooms look out onto Gloucester Road, Courtfield or Harrington Gardens at the back (this is the name of a road).

The 212 rooms have a variety of views and room sizes, ranging from the entry level Classic rooms which are both single (12m2) and double (25m2) up to Studio and Luxury Suites of 40 sqm.

Depending on the floor there are different themes (South Kensington on the first and fifth), City Gent on the second, Kew Gardens on the third and Henley-on-Thames on the fourth, with design touches ranging from the colour scheme and patterns on the wallpaper to memorabilia and pictures on the corridor wall opposite the lifts.

The rooms have good quality double glazing, so sound proofing is excellent (note, the windows can’t be opened). All rooms have complimentary bottled water, tea and coffee, wifi is available £10 for 24 hours and was a good speed. There are lots of power sockets, including for EU and US plugs, and there are 12 interconnecting rooms where the outside door is shut and then the two interior doors open into a kind of porch.

All rooms have flatscreen TVs and suites and luxury rooms upwards (including suites) have bathrobes. There are 11 Junior Suites and two signature suites, raning in size from 40 sqm upwards and these have Nespresso machines. There is also a Club Lounge on the third floor which is a quiet area with tea and coffee making and soft drinks.

Olives is the name of both the bar and the restaurant. The bar is on the corner of Gloucester Road and Courtfield Road.

Unfortunately, the night I was there an extremely loud and drunken party was taking place, so unlike many hotel bars and restaurants, there wasn’t the problem of the hotel feeling dead. I could have done without the foul language being yelled, even if meant in drunken jest, and in truth, I think the staff ought to have tried to calm things down a bit. If I’d been with my family I’d have walked out.

Olives restaurant serves Italian food and has a good range and from what I tasted is of excellent quality. The service is friendly, but disorganised, items being dropped, including onto my table and orders misheard (in fairness, it was very noisy, and English skills weren’t always sufficient, though that’s common across many London hotels in my experience).

The next morning, I stood waiting to be seated for breakfast while at least five staff lined up by the till staring at me, so I gave up waiting to be shown an empty table and sat down at one. After that I was asked for my room number by one of them. Then, in turn, over the next minute or so, three of the staff asked if I’d like coffee or tea.

The hotel excels here because it sits to one side of the co-owned Millennium Copthorne Centre with the Millennium Gloucester on the other side of the Centre. As such it has internal access to the Centre and use of the rooms and ballrooms which range in size up to 480 for a banquet.

There is no fitness room here but guests can use the facilities in the next door sister hotel the Millennium Gloucester. Hyde Park is a short run away.

This is a good value hotel, much improved by its recent renovation with a sense of style and history that will be welcome by many visitors to London. Service was patchy during my stay, but perhaps I was just unlucky. 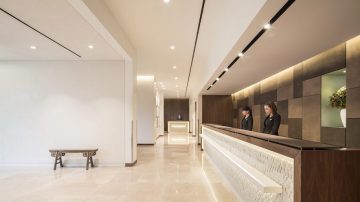