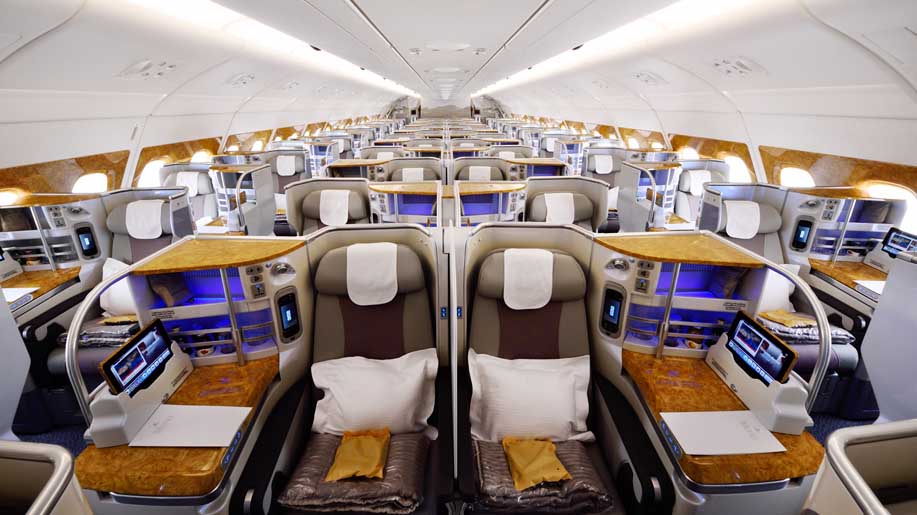 BACKGROUND On July 22, 2014, Emirates deployed its A380 on the daily service to Mumbai, replacing the B777. When the airline launched its services in 1985 with just two aircraft, India was the second country to which it started flying. Today, it serves nine Indian cities with 172 flights, making India its biggest market for international operations.

BOARDING There was a separate queue for business and first class passengers. On entering the upper deck of the A380, I walked past two cabins — one for first and the other for business — before arriving at my seat in the third cabin. I was seated in the second last row.

THE SEAT The cabin is in a 1-2-1 configuration (in a ‘C’ formation) with front facing seats. I was in the middle seat and had the option of pulling up the dividing screen. However, I had a clear view of the person in the window seat diagonally beside me.

The seat was well stocked with sodas, juices, water and an empty glass in a shelf to its right. The menu, headphones, pillow and blanket were on the seat before my arrival. Magazines are in a pocket below the 23-inch screen. A tablet to control everything from seat recline to lighting and the IFE is locked into the side table beside the shelf. It wasn’t very responsive and so I had to pull the remote from near the screen, which stretched far enough to hold comfortably when the seat is reclined at an angle. Once flat, the bedside is roomy enough for a book, mobile phone and water bottle.

Below the screen, there is a hollow for bigger items like a stuffed haversack. Tugging on a ribbon on its floor lifts the flap to a large enough cavity to hold your shoes.

There is a reading light, dual USB port and a universal socket too. Wifi isn’t available on this leg because India’s Civil Aviation Ministry hasn’t formally allowed inflight internet connectivity in Indian skies. It wasn’t functional even after we crossed Indian skies.

THE FLIGHT I was welcomed with a choice of orange or apple juice. The cabin crew handed out Fast Track immigration cards to Platinum and Gold Skywards members and to first and business class passengers. As it is a short flight, vanity kits weren’t passed around. We were given hot towels to freshen up. The crew later came around asking if we would like to be woken up for breakfast. I decided to sleep through breakfast that included mutton curry with lentils, paneer and paratha; sautéed cracked wheat tossed in spices, accompanied with black chickpea masala; and spinach and feta omelette. One could order a soda, juice, mocktail, cocktail, beer, wine or liqueur. I awoke in time for the coffee service, which was about 45 minutes before landing.

ARRIVAL We arrived on time, but due to air traffic, had to circle around Dubai International Airport for about 20-25 minutes before finally touching down.

VERDICT Despite the bar being too noisy for comfort, overall it was a smooth flight.